This weekend we joined some friends on a short camping trip in Wadi Degla, a nature preserve just outside of the city limits of Cairo and only a 15 minute drive from our house. We were planning on arriving around 3 o’clock in the afternoon so that the kids could play around, but the Smiths were the only ones with a vehicle, so Jill ended up taking three carloads of people into the wadi. We were the last ones to arrive and the sun was just starting to set.

The guard didn’t want to let us in since, he claimed, the park closed at 5:00 PM. Jill had talked to him when she left to pick us up and he promised that she wouldn’t have a problem getting back in since part of our group was already inside.

Jill pointed at the digital clock on her dashboard.

He consented that was true and after a bit of finagling we settled on a price to pay for camping and drove into the valley. Rachel was a little disappointed.

“This isn’t the desert!” she said accusatorily as if we had lied, “There aren’t any camels! There’s no sand! It’s not hot! Let me out of the car!”

She lightened up when we started a fire and started setting up the tent we borrowed from the Houses (thanks, Amiee). 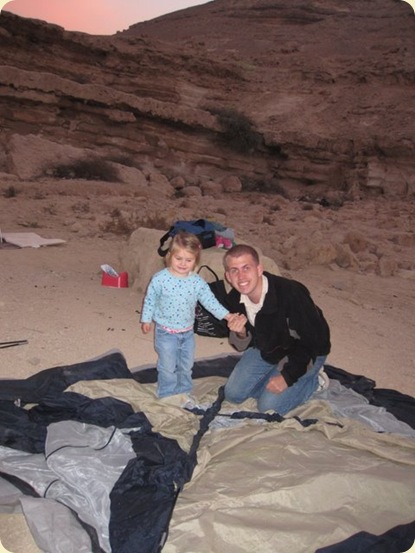 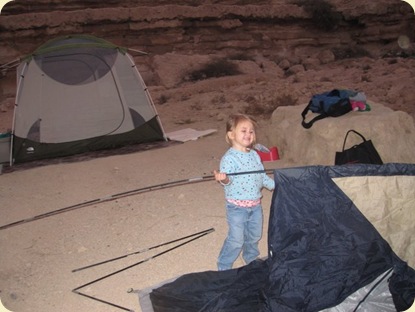 Rachel had three hot dogs before Aden and Jaehee even got back from gathering more firewood on the top of the plateau. Jill and Josh supplied hot dogs for everyone and Aden and Jaehee had brought what we thought were their own tinfoil dinners. Since they were taking so long finding firewood, Nacia suggested that we put them on so that they’d be ready when they got back. 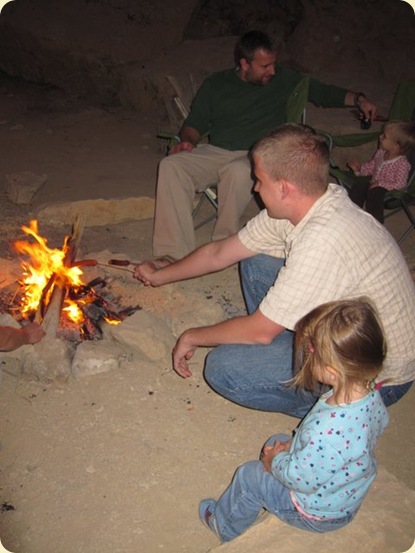 When the Wiliamsons arrived at the campsite not ten minutes later, Jaehee dropped her load of wood and went wild searching for her tinfoil dinner.

“Oh, no! Where did it go?!” she said exasperatedly.

We hastily pulled the packages off the coals and she unwrapped each package to reveal a different vegetable: red peppers, potatoes, zucchini, carrots, and onions. She must have spent all afternoon chopping.

“We brought enough for everyone but I didn’t want to mix the vegetables since I don’t know what everyone likes.”

She’s very sensitive about things like that, although she isn’t a picky eater, herself. She didn’t even make fun of Andrew for fixing himself a potato and carrot platter. I have a hunch it was specifically for him that she didn’t mix the vegetables.

The Williamsons also brought some mushroom soup mix to pour on the vegetables before cooking them. It was a delicious surprise. 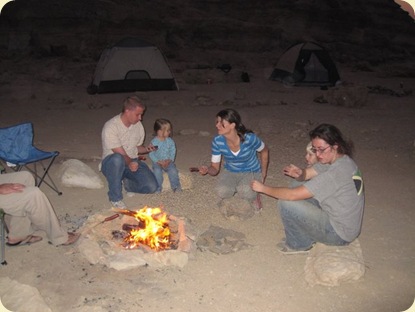 We also had roasted marshmallows and banana boats. Miriam sat mesmerized by the fire all evening. 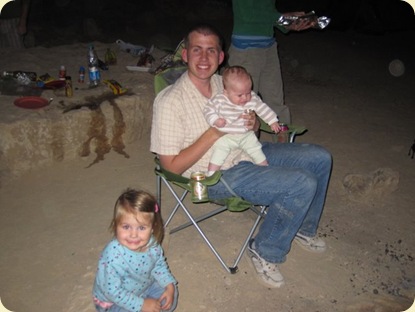 Before we put the kids to bed, Aden put on a special show for us. He’s a professional juggler and brought along his torches and some fuel so that he could do some tricks for us. He swallowed fire, juggled fire, and breathed fire. 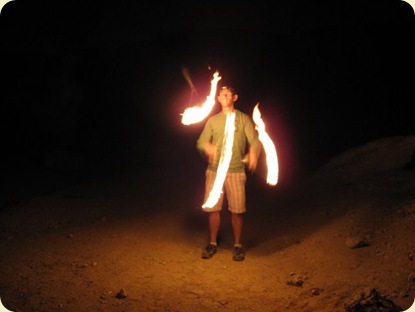 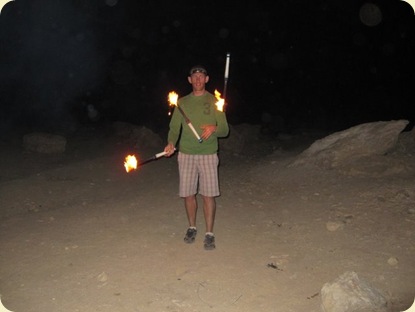 It was quite a fantastic show; he was sure to delight us with several encores and stories of accidents he’d had and how he learned how to juggle. He said that once he breathed fire and then tried swallowing fire, which is altogether the wrong order to do things since breathing fire coats your mouth with fuel, and ended up lighting his mouth and face on fire. Luckily all it did was burn off his five o’clock shadow and he was able to put it out quickly with a damp cloth.

A dangerous profession, juggling fire is. But so entertaining. 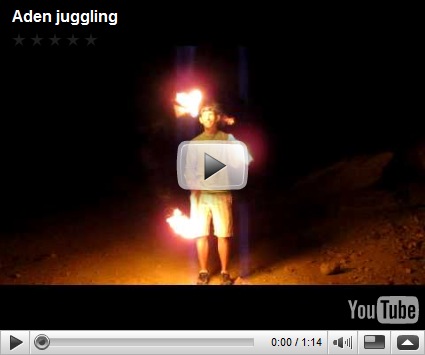 After the show was over, we put the three oldest children to bed. Miriam got to stay up with the grownups because I was afraid that if I left her in the tent alone with Rachel she’d get squished. Rachel was so excited to sleep in a tent, in a sleeping bag.  She wasn’t even afraid when we left her alone to fall asleep—we just put her to bed following our normal routine and then left. 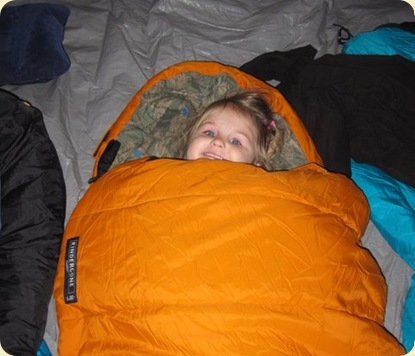 She likewise followed her normal routine of using every excuse in the book to get us to come back. She must have called out to us saying that she needed to go potty at least three times. That’s another thing she was excited about—doing her business in the wilderness. For some reason she thinks peeing in holes is most diverting and just can’t get enough of it. Even at home sometimes she’ll ask if, instead of using the potty, I will take her outside and find a hole for her to pee in. She’s so weird sometimes.

While I was in the tent singing to her, everyone else started to play with the fire. They had purposely waited until we had the kids squared away before bringing out the supplies: steel wool and rope.

You tie the rope on the steel wool, dip it in the fire, walk away from everyone else, and then spin it around. It creates an amazing firework display right in front of your face. The kids could see them from the tents and got all hyped up again, so it was a little while before I got to see exactly what was going on. 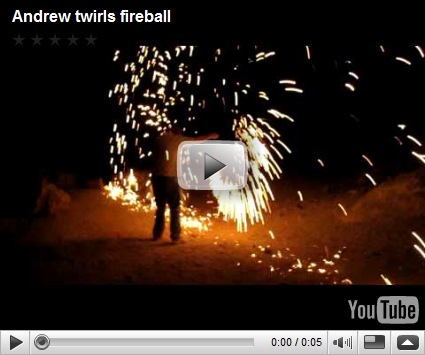 I was immediately offered a wad of steel wool but shied away for a while longer. I don’t do well with sparklers or birthday candles so I wasn’t sure if I’d really enjoy spinning around a burning ball of metal. Eventually, though, I suppressed my fears of lighting myself on fire and took a turn. I didn’t actually find it all that amusing, myself, and apparently the picture that Jaehee snapped of me clearly shows my fear, but it was fun to watch other people do it.

After we had exhausted our supply of steel wool we stood around the campfire talking, our circle slowly shrinking in circumference as the fire died down and we inched our way inwards. While we were talking I sensed an animal lurking around our campground. I watched the shadow moving between the tents and creep toward the wall of the canyon. There its shadow was revealed by the campfire. It was a dog. Figures. I can sense a dog a mile away.

I pointed it out to everyone else and we decided it was probably just a desert fox because its tail was rather bushy, its ears rather long, and it was far, far too quiet and unannoying to be a balady dog.

This got us talking about animal stories. Aden, Nacia, and Jill are all hearty wilderness explorers and have taken a lot of classes and have gone on a lot of trips. That means they are also full of stories. Jill told us that one time she woke up in the morning when she and Josh were out camping to a bear sniffing her face through the mesh netting of their tent. He gave about five sniffs and then walked off to explore the rest of the camp.

Personally, that would put me off camping for a while, but Jill still seems to enjoy it a lot.

We talked until the fire was gone, smothered the coals, and went to bed. Unfortunately for our little family, we’d forgotten to procure sleeping pads so we slept on ground, which was both cold and hard. Eventually, though, we both passed out from exhaustion and even though we had initially thought that morning couldn’t come soon enough, we found out that it could come much too soon.

Rachel was up at the crack of dawn. 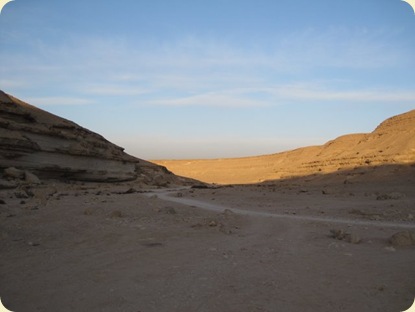 “Wake up, Mommy!” she chirped, “We’re camping! I didn’t wake up too early. See? It’s light outside.”

Oh, the joys of camping with children.

Between Tuesday and Rachel the whole camp was up and running before seven o’clock in the morning and soon everyone was off for a pre-breakfast hike up the cliffs opposite our camping site. Andrew and I were the last to leave since Miriam had her heart set on hiking after breakfast and wasn’t about to cooperate until she’d had her fill. It didn’t take us long to catch up with the rest of the group, though. It was a short hike, but the perfect length for Rachel, Tuesday, and Mo. Rachel went ahead with Jaehee and apparently walked most of the way by herself. 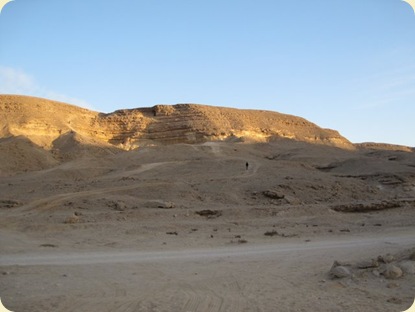 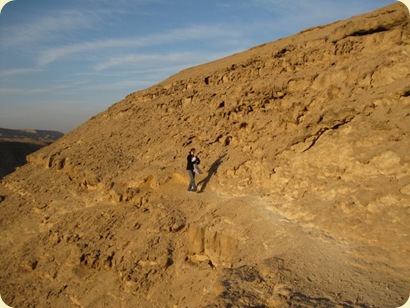 The view from the top was beautiful, unless you turned toward Cairo—then all you got was a nice, clear view of the smog that covers the city. You can see how it earned the nickname of “the black cloud.” 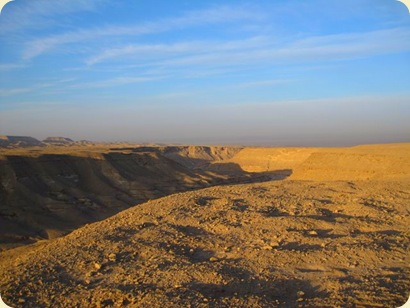 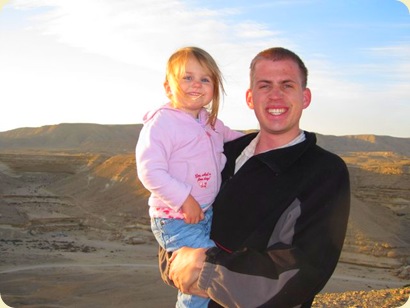 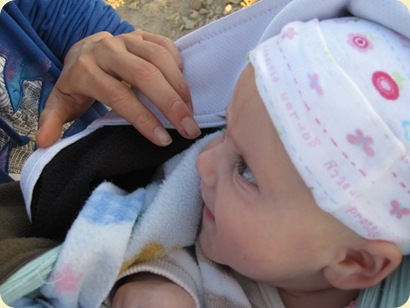 We let the kids run off and play in the rocks and dirt, making sure they were only running in the direction of away-from the edge of the cliff and not toward it. They had a blast. 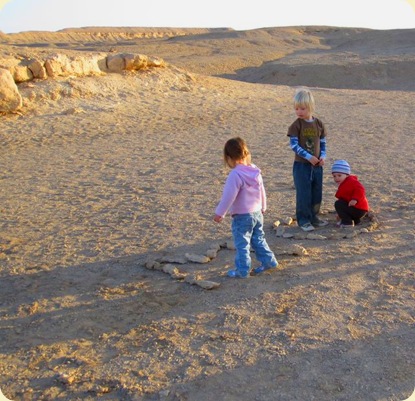 Rachel kept picking up rocks and throwing them at people, so Andrew told her to throw them away from people. She picked up a rock and quite obediently turned around and hurled it away from the majority of the people. It just so happens that Mo was standing opposite of her and he almost got creamed. We had to re-explain what Andrew meant by “throw them away from other people.” He certainly didn’t mean twirl around and throw blindly behind you… 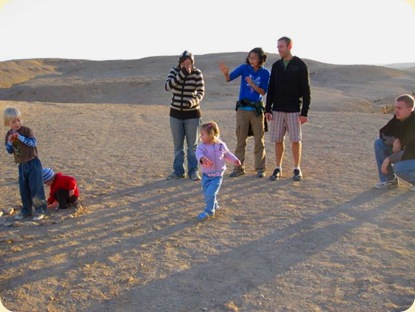 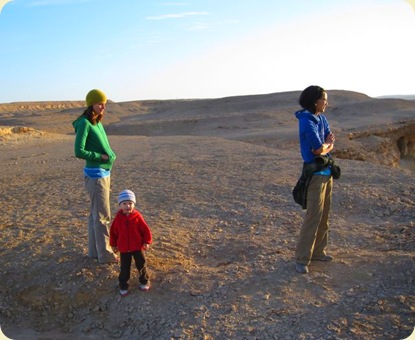 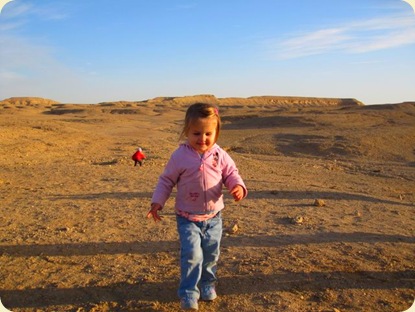 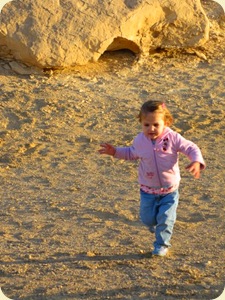 We told the kids about the fox that we had seen the night before and then Andrew convinced them to go look in this little cave behind a boulder. Right when all the kids were crouched up around it, trying to get a glimpse inside, Andrew growled and they all turned on their heels and scattered back to their parents. It was hilarious. And once the kids figured out Andrew was only teasing, the scenario was played out over and over and over again…until they found a small skull inside the cave. 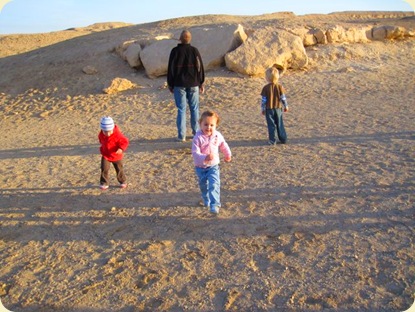 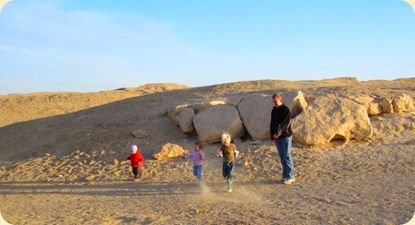 The kids had a blast with Aden, Jaehee, and Nacia. It was like camping with full-time babysitters. The kids literally flocked to them the whole time. That’s what you get for camping with the nursery leaders, I guess, although Nacia isn’t a nursery leader—she’s just a kid-magnet. It’s nice to have people around who love our kids so much. They’re like surrogate aunts and uncles. 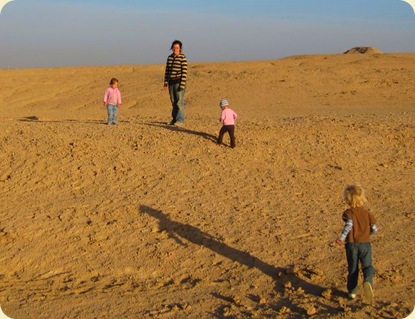 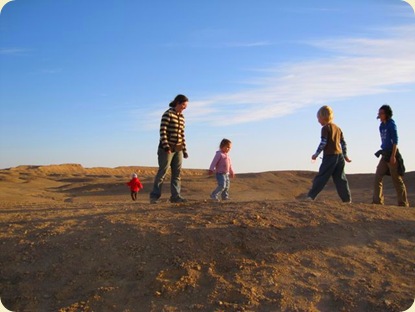 When our tummies were all grumbling and the kids were complaining of being tired, cold, and hungry, we decided to head back to camp for breakfast. 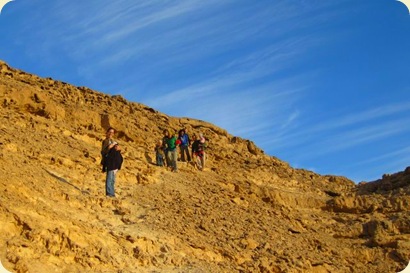 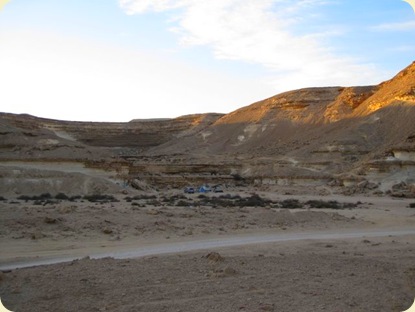 While we packed up, Nacia showed Rachel how to draw on the rocks with charcoal. They both got so dirty, but Rachel thought it was the coolest thing ever. 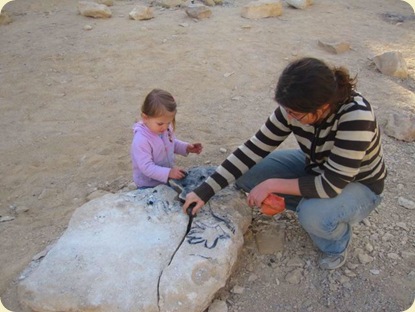 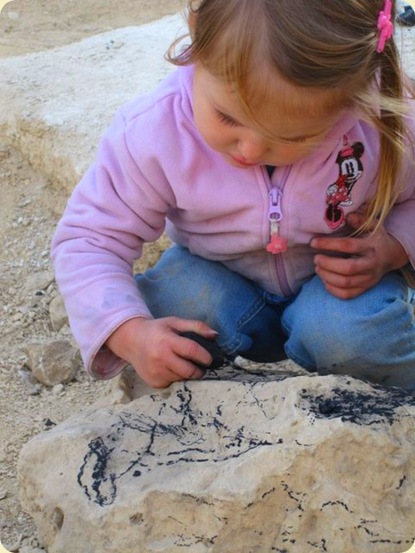 Although we had made three trips into the wadi, we decided that we could make one trip out. Aden had brought his mountain bike, so he struck off for home on his own while we loaded up the Smith’s SUV. We fit ten people inside, along with camping gear for eleven people. We strapped about half the gear on the roof and Jaehee climbed in the back with the rest of it, voluntarily, of course. Nacia, Andrew, and I sat in the backseat with Rachel, Mo, and Miriam on our laps, respectively. Jill sat shotgun with Tuesday and Josh drove. 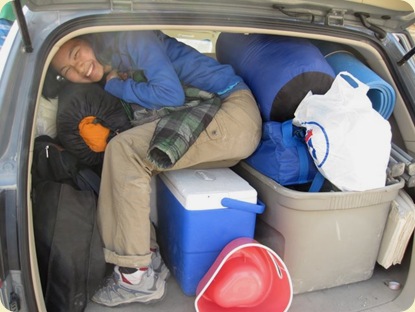 It almost made us feel local to cram that many people into a five-seater vehicle, although if we really were Cairenes we probably would have had that many people on a motorcycle. When we were driving into the campground the night before there were cars leaving with people hanging on the outside for a ride, the inside completely full. We felt pretty crowded, but if we really were locals we probably would have crammed twice as many people inside.

We had a great time and would love to do it again, although next time we’ll remember the sleeping pads.