The day that almost wasn’t (December 30)

Our itinerary for today was light and easy compared to the previous three days: swing by the Suez Canal, relax by the Red Sea at Ain Sokhna, finish off the day with a swim at the Maadi House.

It should have been an easy day. But it wasn’t.

We loaded into the van bright and early once again and set off through the desert. Everything was going just fine until we got to the checkpoint/toll booth onto the Suez road.

“Where are you going?” the guard asked.

“Suez,” our driver answered, handing him our official travel plans.

“What are you going to do there?”

“They just want to see the canal.”

“But why? What’s the real reason they are going to Suez?”

“That’s not a good reason.”

How is that not a good reason? Is there anything else to do in Suez, other than looking at the canal? Not really.

He had us pull off to the side of the road just after the toll booth so that he could consult with his senior officers via walkie-talkie. After about a half hour he let us through after jotting down some details about us in his notebook: our nationality, how many of us there were, and the license plate number of the vehicle we were in.

Suez certainly was different than any other place we’ve been to in Egypt. There were no other tourists there. It was clean and green.

We looked for a place to park so that we could walk along the boardwalk. There was a parking lot close by that had some open spots but it was guarded by a police officer. We drove into the driveway and driver asked if we could come in.

“خش” said the guard, waving us through the gate, “Khoosh. Let’s go.”

We drove through the gate and into the parking lot.

The guard started yelling and waving his arms at us.

“What do you think you’re doing?! Why did you come in here?”

“You told us we could,” said our driver.

“Yes. You told us to come and raised the bar to let us in.”

After a ridiculous argument we parked and went to see Port Tawfiq, which isn’t technically the canal since it is a terminus of the canal. 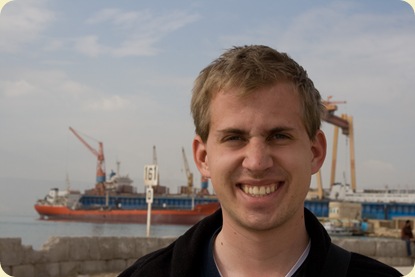 I can’t seem to figure out which way the canal flows. Wikipedia says that it flows south to north, emptying Red Sea water into the Mediterranean Sea but the Suez Canal Authority says that the canal flows north to south. Some sources I consulted suggested that it runs either way depending on weather and tides. Jacob asked me if the Nile flowed both ways because ships travel both ways on the Nile, but I told him that the Nile only flows north. I thought it was silly to think that a river could flow both directions but now find myself wondering if that is really possible. Oh, well. The canal was cool even with these puzzling questions. Miriam spent some time hanging out with Grandma. She’s getting so smiley; it’s great. 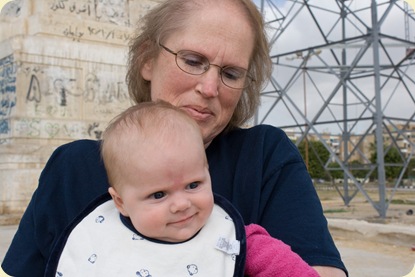 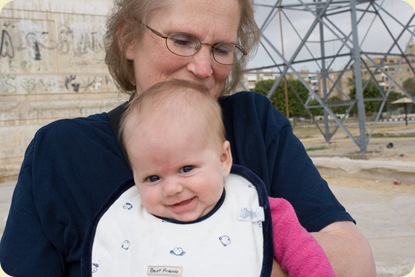 Rachel found some sticks and commenced sweeping the sidewalk with them and pretending to cook food. She tried to force Uncle Jacob to eat a stick but it didn’t work. 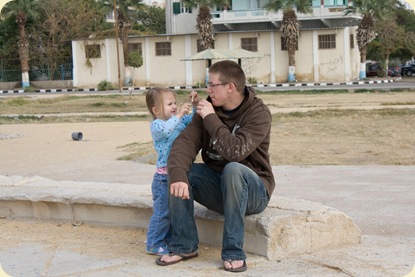 Only Jacob and I went to touch the water in Suez. Jacob almost slipped on the algae growing on the bank; I went in right after a ship had gone past, kicking up some wake, so I didn’t have to walk down the bank as far to touch the water. Instead the water came to me, so it wasn’t slippery at all. 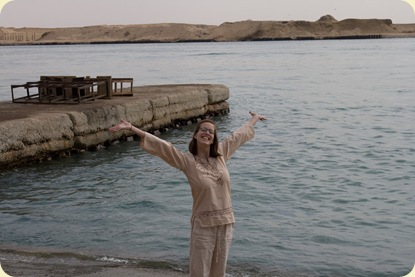 When we went back to find the driver, we found that he and the guard, who had been so surly before, were enjoying a friendly cup of tea together. They acted like best friends when they said goodbye. Who would have guessed that just an hour previously they had been vein-popping, blood-boiling mad at each other?

The drive between Suez and Stella di Mare (at Ain Sokhna) was much shorter than we expected. Rachel was so excited to be back at the Red Sea—going to the beach is one of her favorite things to do.

We went through the front gate at Stella di Mare without any problems, but when we arrived at the beach and showed them our card, we were rejected.

“I can read Arabic.”

“But we have the card to get on the beach.”

“It isn’t. It’s our friend’s card. But our friend is American, too, and he gave us permission to use his card.”

“No, but our friend is letting us use it. We come here all the time.”

“It doesn’t matter. I can’t let you on the beach.”

“Because this isn’t your card.”

“But they let us in at the front gate and I have the keys to the challet as well. We came here several times over the summer, stayed at the challet, and played on this beach.”

“Well, the card lets you come into the resort and the key lets you into the challet. But you can’t come to the beach.”

“This card lets us onto the beach.”

Finally the guard decided to talk with his superior via the ever handy walkie-talkie. While he was doing that Rachel kept repeating the same question,

When they decided that we weren’t a security risk and that we did, in fact, have permission to borrow the card, they let us onto the beach, which was practically deserted. I’m so glad the guard was guarding the empty beach so vigilantly.

The water was freezing. So cold that the only two that bothered to change into swimsuits were Jacob and Rachel. Jacob went all the way in and Rachel waded in up to her tummy. The rest of us just rolled our pants up to our knees and waded in ankle-deep. 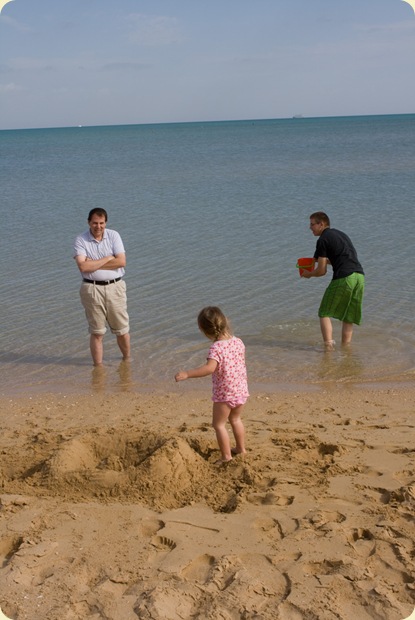 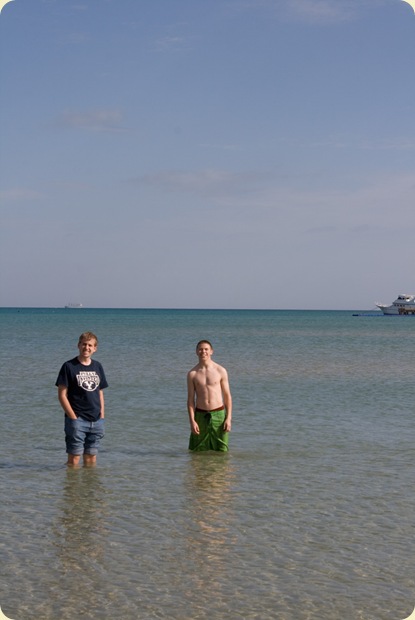 “I wanna be a god!” Rachel announced.

“I wanna be a gawd!” she repeated, “I wanna plant a gawden.”

She picked up her watering can, filled it with sea water and sprinkled it on the sand singing happily,

For a minute I thought she was pretending to be deity, but I’m glad we got that all straightened out. 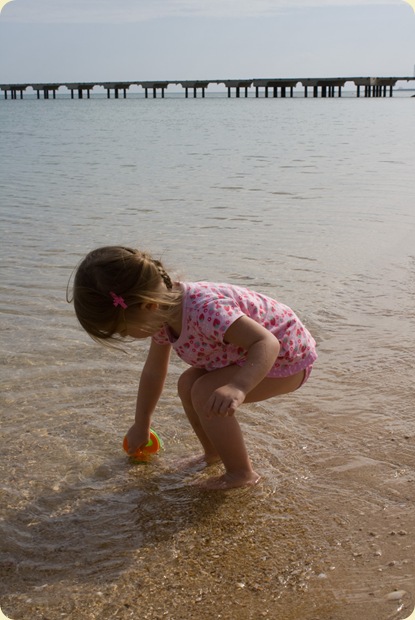 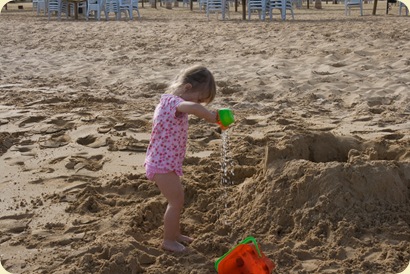 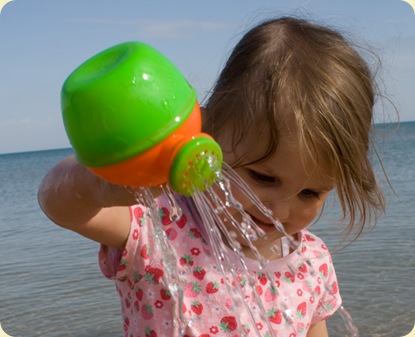 Miriam also enjoyed herself, even though she was still in her pyjamas. She is too cute for words! 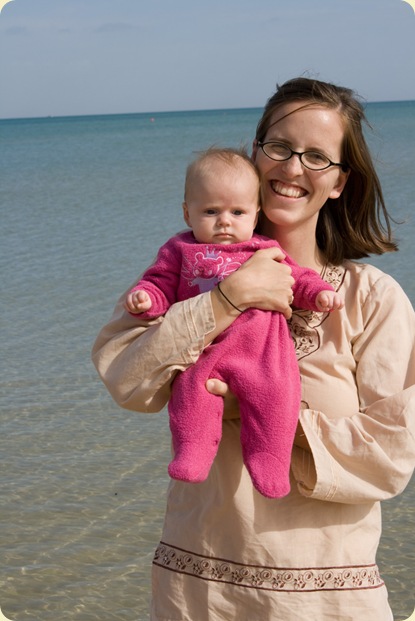 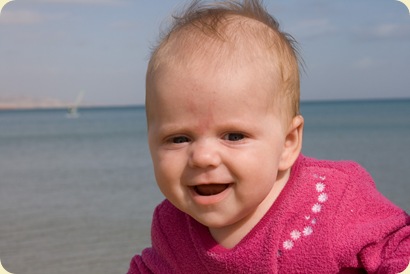 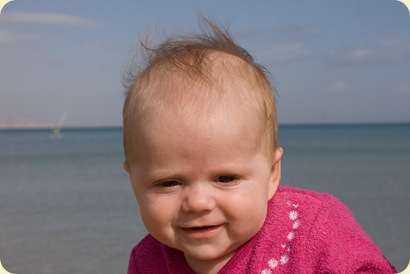 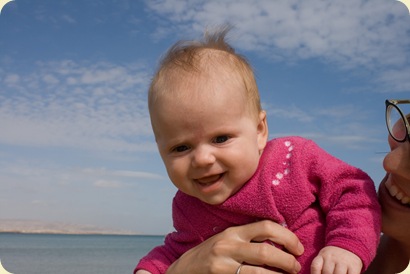 We had a picnic lunch at the beach, which Rachel was rather excited about since one of her favorite songs right now is Teddy Bears’ Picnic. As excited as she was, though, it sure was difficult to get her to stop playing long enough to eat anything. That’s half the fun of picnicking, though, I guess.

We found a live starfish, which Rachel found both exciting and terrifying, and after much deliberation, Grandma joined the rest of the waders in the water and ended up walking out farther than anyone—on a sandbar, of course, so no deeper than her knees and no comparison to Jacob who dove in. 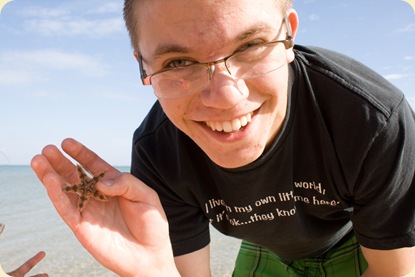 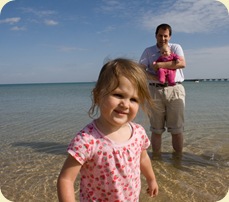 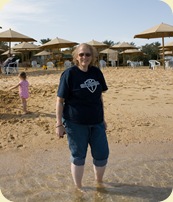 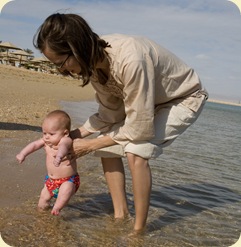 Shortly before we left I decided that Miriam should at least get to try out the water, too, so I changed her into some swimmies. She wasn’t sure what to think of the cold water temperature at first but soon got a look of disgust on her face before lifting one of her legs out of the water. She held it up for a few minutes before switching it out for the other one. Soon she gave up altogether and lifted both her legs at the same time, dangling from my hands by her armpits. That’s when we decided to take her out. 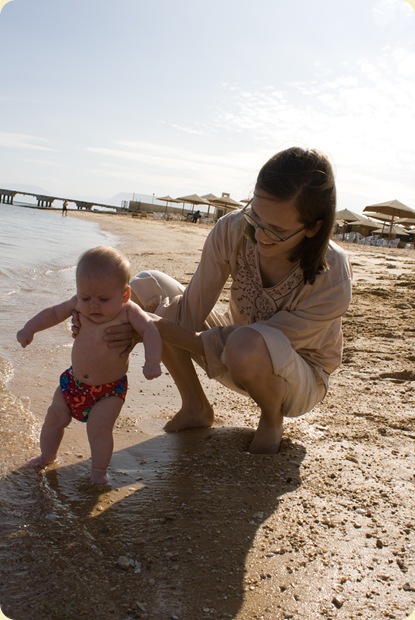 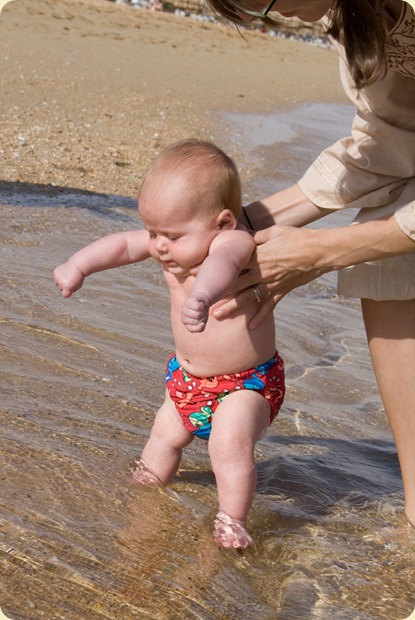 Once Miriam was out of the water and on the sun-warmed sand she was much happier. She and Rachel squished the castle Uncle jacob helped Rachel build. 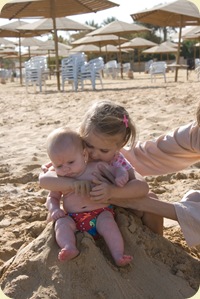 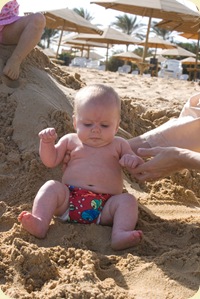 And then we put Miriam down for some tummy time. The whole time she was lying in the sand I was urging Andrew to take the picture *QUICK* before she face planted. She’s good at holding her head up but she’s only two months old and can’t hold it up forever! 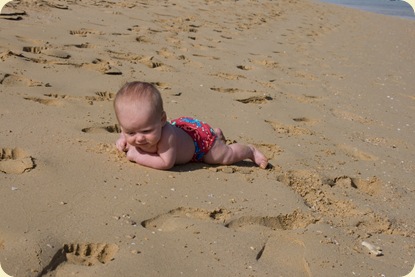 We weren’t quite quick enough in retrieving her, so it turns out her first solid food was  a mouthful of sand. Yum, yum! 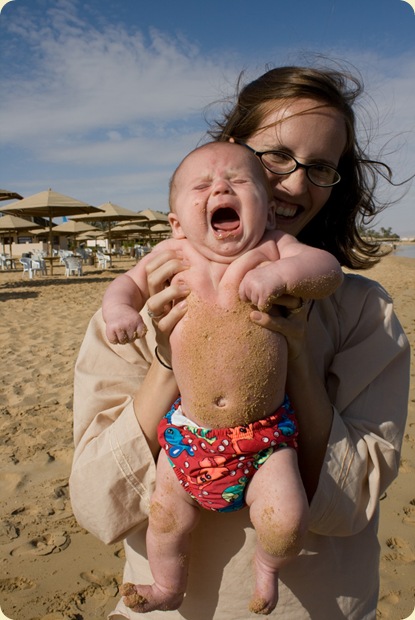 Anyway, we didn’t stay at the beach too much longer. Our driver was getting antsy to get back to Cairo—I think that after five days he was getting a little sick of us. Besides, the water was too cold to enjoy, anyway, and we wanted to go on a real December swim at the nice heated pool at Maadi House.

Amiee kindly agreed to sign us in, but wasn’t able to stay because she had to take Emma to get an x-ray of her lungs. The guard at the Maadi House informed her of the rule that members must accompany their guests at all times and wouldn’t let her sign us in until she promised to come back to “check on us.” So we got in, luckily, and enjoyed a little swimming.

Today was a hard day for doing anything—we ended up doing a lot but we had to fight to get access to do everything we wanted to do . That’s one frustrating thing about living in Egypt…one thing among many.