Reason # 548 I will never have sextuplets: cub scouts.
Need I say more?
Of course I need to say more. It's me.
Having six eight-year-old boys for an hour is exhausting enough. I can't imagine having to raise six boys all at once. When the boys leave the house I literally sit down and sigh. It's just a little too wild pour moi.
Today we learned about pets and birds, which meant that we finally got around to making that birdhouse I've been talking about. Notice I said "make" and not "build." That's because, instead of using wood and nails, we merely refashioned some milk jugs into bird feeders. It was much easier and the boys were just as excited about it as anything else and their moms probably won't feel too bad about tossing/recycling the bird feeder after it has run its course because it's technically already garbage.
I helped Rachel make a prototype this morning so that we could show the boys what they would be making. She wanted to make hers pink so I handed her a pink permanent marker and let her go to town. She coloured the entire milk jug pink—it took her close to 45 minutes. I was impressed with her dedication to the project. 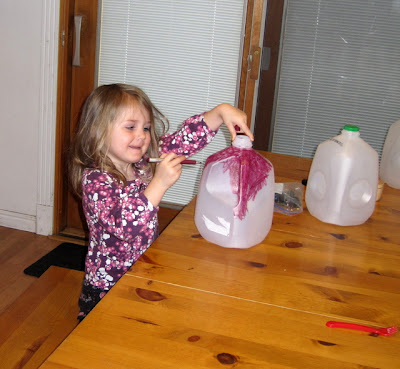 Here's her finished project. I meant to get a picture of the cubs making theirs but things were a tad busy and I never got around to it. Theirs looked similar...only far less pink. 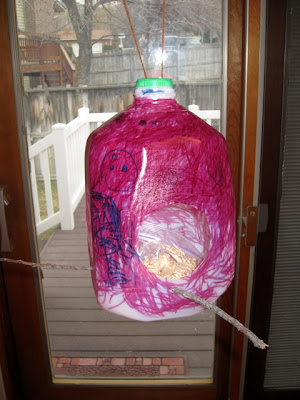 They were super easy. We followed some instructions I found online, more or less, only we poked holes in the lid and strung a string through it and used a hole puncher to make the holes for the stick and thumb tacks to make the drainage holes on the bottom. We are not very high-tech here. Awl...what?
Before we jumped into the bird feeder insanity, though, we had a guest lecture by my friend Lindsey. She works at an animal clinic in town and was kind enough to talk to the boys about animal safety—the rabies part took probably twenty minutes (the boys were filled to overflowing with rabies-related questions).
She was great and was so patient with the boys' outlandish remarks and questions.
My favourite exchange was probably this:
We had just discussed what mammals are since only mammals are susceptible to the rabies virus. Mammals are warm-blooded animals, have live births (ie. they don't lay eggs), and feed their young milk, etc.
Lindsey: So, are you mammals?
Cub: Yes...well, no. But girls are! 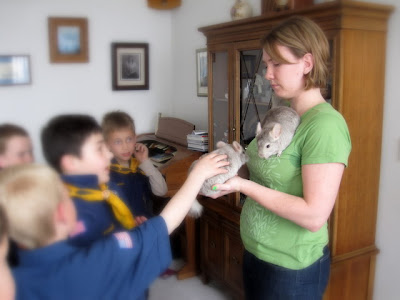 At the end of her presentation she brought out her pet chinchillas: Stitch and Jaws. The boys (and Rachel) thought they were the coolest animals, ever, and all started swarming around Lindsey to get a closer look and a chance to pet them. Chinchillas are very, very soft and a rather unique animal round these parts so they piqued the cubs' curiosity. 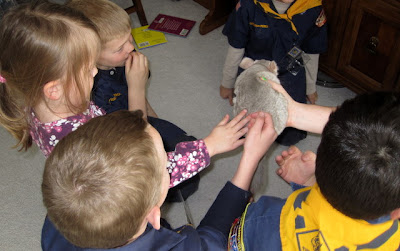 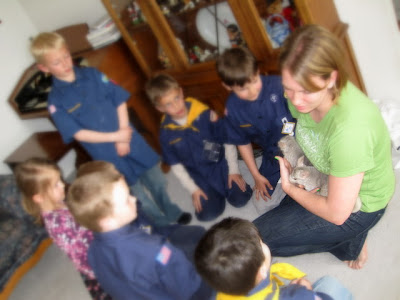 The poor things were as scared as could be and kept scrambling up Lindsey, looking for safety. 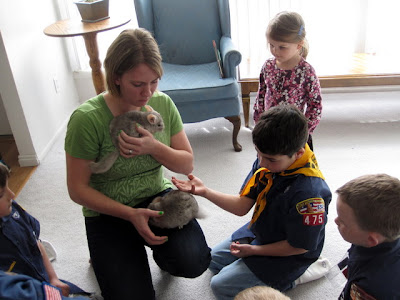 The boys also had to read a book about birds and a book about pets and then talk to me about what they learned from reading it. We took the boys to the library a couple of weeks ago and let them choose a dozen or so books in preparation for today. We were rush, rush, rushing at the end to get everything finished, but we managed to get everything done in time to send the boys out the door, cookie in hand.
It was a productive hour, that's for sure.
And that's it for this month...until pack meeting.
Posted by Nancy at 10:57 PM