I am no fashionista and since there is a ball on Saturday—a ball that I've been looking forward to attending since I found out we'd be moving back to Utah—I need some fashion advice. Sometimes if I'm really in a pinch and I need fashion advice I think to myself, "WWLD?" or, "What would Layla do?"
She has a fashion icon.
I just learned how to remove mascara, if that tells you anything.
I was probably the only twenty-five-year-old in the world who googled "how to remove mascara." Make-up remover exists, folks. Who knew? Also, Vaseline will work in a pinch (or, in my case, not in a pinch simply because it's way cheaper than make-up remover).
Don't gawk at me! I've had plenty of people offer to help me put on make-up but no one has ever shown me how to get the darn stuff off! I was far too busy actually applying myself academically in high school and college to bother learning how to properly apply (or de-apply) make-up.
And where did that get me? I'm a 4.0-achieving nerd googling "how to remove mascara."
Talk about life skills. Sheesh.
Layla, you are my fashion icon because you have a fashion icon.
I have three almost-options for the ball, if we can indeed still find tickets and a babysitter.
Option A: rescued from a DI bag this past summer 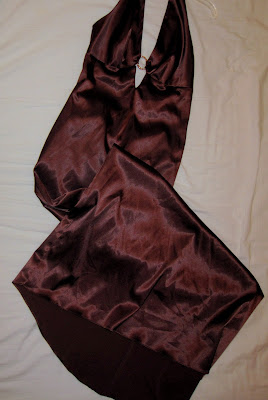 It fits decently enough but I'd clearly have to make it a little more modest. If I were in the Middle East this wouldn't be a problem—I'd simply go "muslimy" and wear a shirt underneath.

Mormon girls have been known to layer things, though I'm not sure wearing a full shirt underneath a halter top counts as Mormon-chic.
Option B: found at a clothing swap 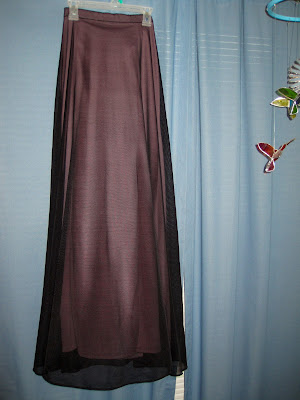 This is only a skirt, obviously, so I'd wear a shirt on top. I think I have a purple shirt that matches the under layer of the skirt. I also have a black top. The only problem is, it's pretty close to mauve, not that I'm in the habit of taking advice from evil step-sisters.
Option C: my mom's wedding dress 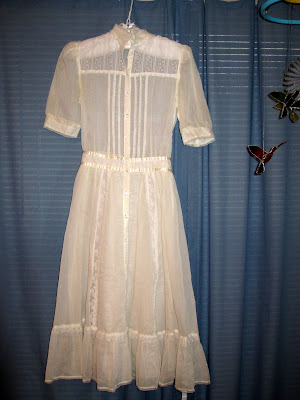 She once convinced me to wear this for a ballroom performance after one of my years at a summer dance camp at BYU. I was rather upset about it because it wasn't what everyone else was wearing—it was vintage, which is just another (ameliorative) way of saying old-fashioned. It was so not cool. (Sorry, Mom.)
Vintage is in now, though, right? I've been thinking of pulling this out of storage for a while now. It's been packed away since we moved to Egypt.
I'd definitely have to layer something underneath since it's a little see-through. It's a tad tight in places it didn't used to be (thank you, children) and is only knee-length, but it fits.
Anyway, if you were me and you were going to a ball, which dress would you wear?
Posted by Nancy at 12:16 PM