Blacks & the Priesthood and Beard-growing Contests

I'm really excited for my primary lesson tomorrow. It's on the story of Cornelius in Acts 10 & 11. One of the enrichment activities was to have the kids match some super-stereotypical facts to their countries. Like, "In what country would you see someone wearing a kilt?" or "In what country do people eat lasagna?" Instead of doing that we're going to have the kids match translations of texts to the right language. We're also going to discuss the Official Declaration–2 (specifically we're going to President Hinkley's talk about the restoration and Andrew's going to talk a bit about the church in Ghana). 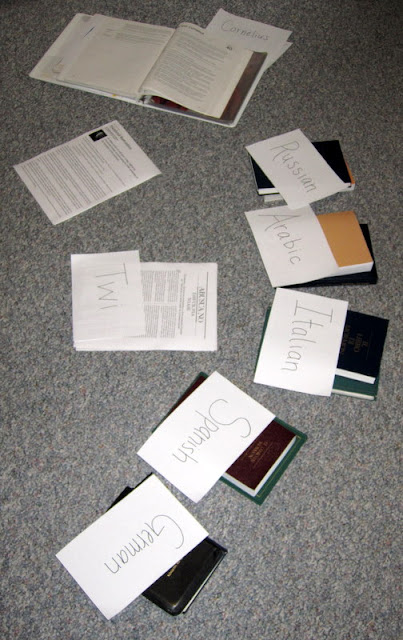 We don't have any texts in languages spoken in Ghana and my brother Patrick didn't either so I went online and found translations for The Living Christ and The Family: A Proclamation to the World in Twi. The Fante (Fanti) site was down, unfortunately.
I'm so excited for this lesson.
Andrew called me a nerd while I was getting this all ready. Seriously, though, I'm so excited for this lesson. Hopefully the kids will enjoy it as much as I will.
While we were enjoying our ice cream at the BYU Creamery yesterday we saw a bunch of old pictures of activities on campus. This one (circa 1950) caught my eye: 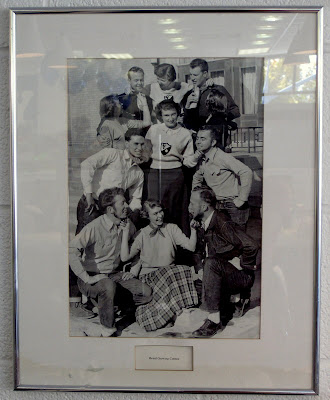 It's a beard-growing contest. At BYU, people!
BYU doesn't allow beards. Not anymore, at least...not usually. It's against the Honor Code.
You can get special permission to grow a beard. I had a friend once, whose name was Loren, who took Russian with me. He got in a nasty car accident and got glass blown into his face. Because of all the stitches he had to get on his face—he was seriously so messed up—he couldn't shave. So he got a "beard card" to carry around to let those who might question his adherence to the Honor Code know that he was "allowed" to have a beard. That's important because you're not allowed to do things like take a test at the testing center or use computers at the library with a beard.
My brother Patrick also got a beard card. His reason, though, was because he was cast in a movie the church was making of the New Testament. He needed long hair and a long beard. He was quite the anomaly on campus. This is him and his friend Skip right before they went skydiving last weekend: 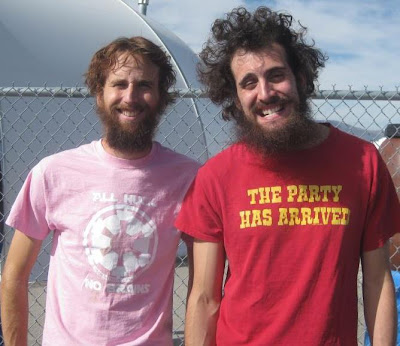 Anyway, Andrew and I were talking about the picture and I said that I should submit a letter to the Daily Universe about the picture. It would be satirical, of course, but I couldn't decide if I should a) feign indignation and demand that the offending picture be removed, b) call for the beard-growing contest be reinstated as a tribute to the past or c) hail the Honor Code for protecting our young men from the unchaste attention of beard-loving women (because the young ladies in that picture look like they're having way too much fun stroking those beards).
Personally, I like my man clean-shaven and I understand the importance of looking presentable but sometimes the Honor Code gets a little too letter-of-the-law for me. Like the time Andrew was pulled aside at work (back when he worked at the library) because his hair was touching his ears. Andrew spends 95% of his time nearly bald—his hair is never out of control shaggy. It might get a little shaggy in between cuts but certainly nothing to complain about. Not when we allow football players to wear their hair like Riley Nelson.
I see nothing wrong with a manicured beard. This, for example, is one of my favourite recent pictures of Patrick: I think he looks very nice here—presentable and clean-cut (though certainly not clean-shaven). I see nothing wrong with this. Skip, on the other hand, could use some mane-taming...
Sometimes I enjoy discussing slightly controversial topics in our religion—like blacks & the priesthood and beard-growing contests—especially when living in Utah. It's a way to liven things up—things can get a little boring here.
Posted by Nancy at 1:39 AM