This afternoon my mom and dad volunteered to take Rachel and Miriam to the park to give me a break. It's as if they could tell we'd had a difficult week. The girls had a lot of fun and even got to see some ducks by a pond—people were feeding the ducks but weren't counting on Miriam's lightning quick reflexes. She apparently snatched a piece of moldy bread off the ground before any of the ducks could grab it (or before my parents could grab her). My dad ended up digging it out of her mouth. Silly baby.
When the girls got home we finished rifling through our dress-ups and dressers to find all our pirate gear. 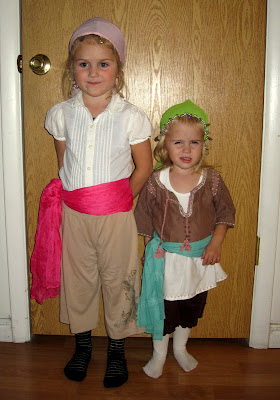 We ended up with some pretty good costumes, I think, though the girls couldn't settle on which headscarf they wanted. Rachel agreed to pose with her sword—and she looks mighty fierce—but she refused to wear the sword with her costume. It's bendy and stupid, remember? 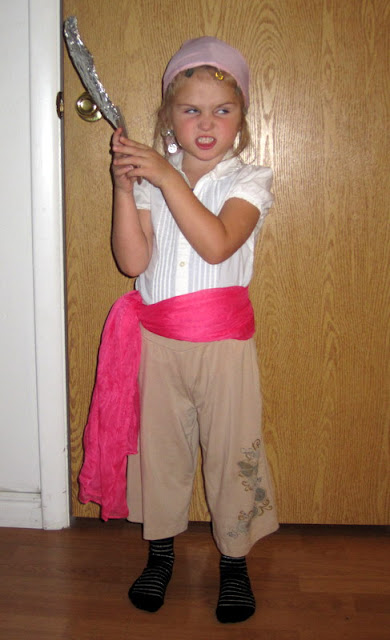 Miriam couldn't quite figure out how to look fierce or how to handle her sword. She ended up looking cute instead. And that's just fine with me. 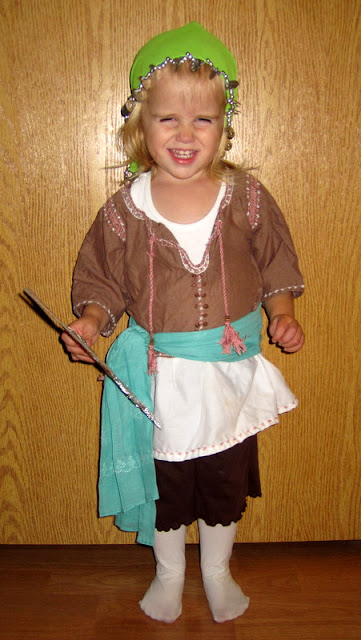 Rachel also has that cute thing down pat.

In the end the girls decided that they both wanted pink headscarves, which was fine because we have loads of scarves (thank you, Middle East). Miriam is wearing a belly dancing scarf on her head—Rachel didn't want to wear it because she doesn't like anything that even remotely resembles jewelry. She won't wear rings or necklaces or bracelets or ear rings or belly dancing scarves or anything. Miriam, on the other hand, loves jewelry of all sorts. She was thrilled when Rachel decided she couldn't handle the jingly jangle of the coins on her headscarf because that meant she could wear it! 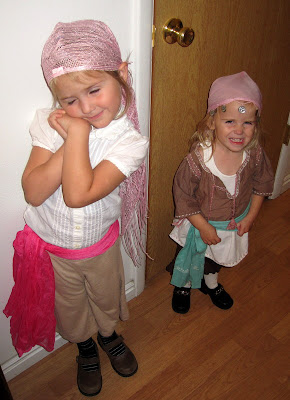 I dressed up as a pirate, too. I wore the green belly dancing scarf (the one that Miriam has on her head above) on my waist and a plain green one on my head. Rachel wanted me to accessorize with the medal I got at the Halloween Half Marathon last year because it looks like a pirate necklace. It was nice to get some extra mileage out of it (pun intended). 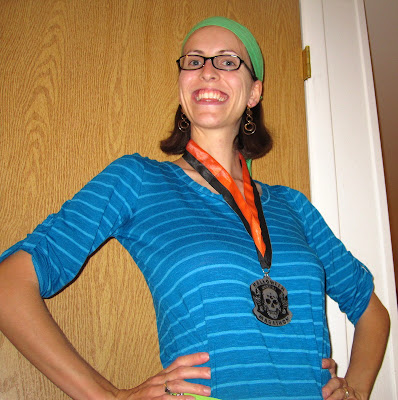 Miriam and I tried to take a mean/angry/fierce/scary picture together. She totally failed—she looks more scared than scary. 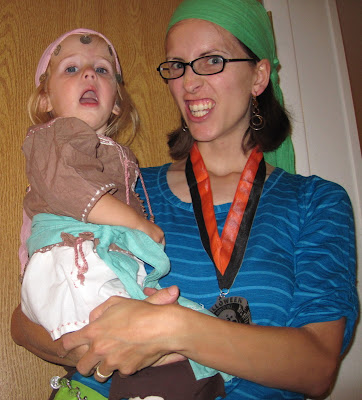 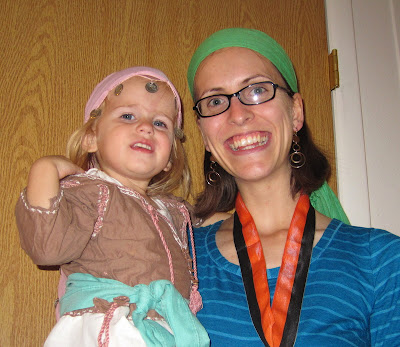 Rachel asked why we were dressing up as pirates right before we left. I reminded her that it was a pirate-themed party and told her that you have more fun at pirate parties if you're dressed up as a pirate.
"Uh-oh!" she said, "Well, I know Grandpa's not going to have fun then because he told me he's not going to dress up!"
"That's okay," I said. "He'll still have fun. Just not as much fun."
Andrew didn't dress up (*cough*party-pooper*cough*) but he came along with us, anyway. Rachel noticed his bland outfit and gave him a sound warning about the joyless perils of not dressing up appropriately when attending a pirate party. He was so worried that no one else would be dressed up, though, and didn't want to risk it. I'll admit that I was a little worried about that, myself, but I was the one going out on a limb and showing my inner sea dog. Not him! I don't know what he was so worked up about—he was embarrassed for me, I guess.
Luckily, just as we were arriving, my family walked up and Patrick and Josie were dressed as pirates as well (even though Naanii and Grandpa were not). We went into the reception together. It was fun and there were other pirates there so we didn't have anything to worry about. In fact, it was a good thing we dressed up because half of my friend's family is French and they had some guests from France who were decked out in pirate garb (and were decidedly embarrassed about their attire by the time we arrived). Annik's mom assured them that more pirates would show up to the party just when we walked through the door.
Uncle Patrick looked especially convincing as a pirate because he has that beard-thing going on right now.
When we got home, I gave the girls a bath while Andrew made some macaroni and cheese for dinner. After dinner the girls settled down for a few minutes to make some signs for Grandma—she's been in Seattle this past week, visiting Richard, Diana and Michael, and her plane came in this evening. 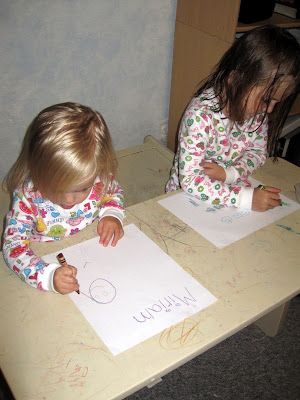 I don't know if you can see it, but Miriam drew a happy face on her paper—I drew the purple circle and she added the brown eyes and mouth and was working on adding hair when I snapped this picture. 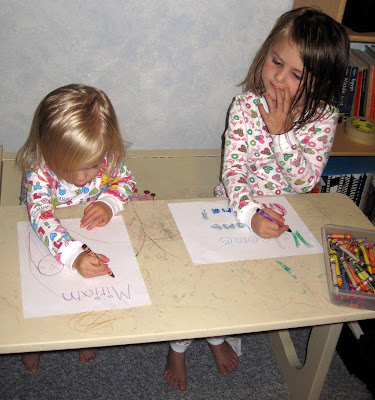 She ended up adding a whole lot of hair. 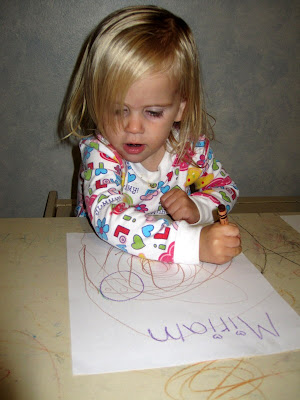 Rachel asked me to write "Welcome Home Grandma!" in bubble letters so she could colour them in. When she concentrates she sticks her tongue out. 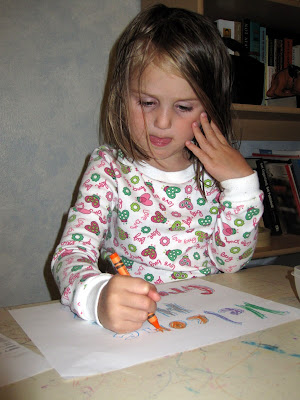 Then it was snuggles and off to bed, though not off to sleep, of course. I applaud anyone who can sleep-train their kids but the whole idea makes me scoff. How, exactly, do you make someone go to sleep? My theory is that children are a lot like horses. There's a saying that goes, "You can lead a horse to water but you can't make it drink." My saying goes, "You can lead a child to bed but you can't make it sleep." 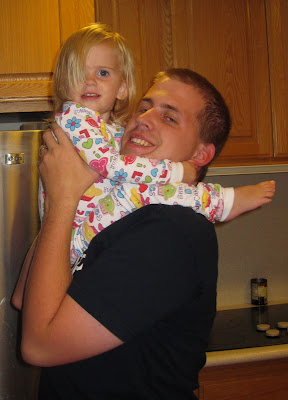 Just having them in bed is good enough for me. Whenever they sleep is up to them. I don't care if they want to get up and read or build with blocks or tell stories or sing songs—as long as they're quiet and aren't bothering each other.

They were still awake when Grandma came home—which was only five or ten minutes after we had put them to bed, anyway—so they got to hug her goodnight, which made them very happy. They missed her a lot while she was gone. That may have contributed to our difficult week. Heaven help us when we move out!

Still, today was a good day overall, and the perfect way to end our week!
Posted by Nancy at 11:57 PM