Remember when Rachel drew me a picture of me getting her into trouble?
Well, she's since learned how to spell (kind of), so today I got a note instead. This time both Rachel (on the left) and Miriam (on the right) are crying. I'm in the middle—the one smiling brightly, that's me. 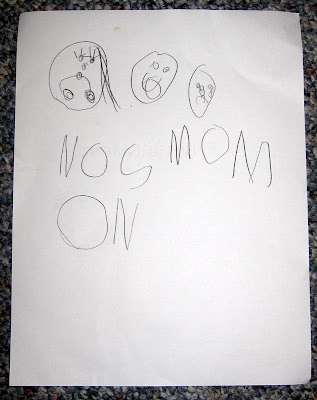 Her note says NOS, which was meant to be singular, and then says ON, which was meant to say NO. It also says MOM.
Here's what happened:
Miriam asked me to turn on music so that she could dance. She wanted to dance to Dorothy music, also known as The Wizard of Oz. When Rachel heard there was going to be a dance party in the living room she invited herself and insisted that we instead turn on Joseph, also known as Joseph and the Amazing Technicolour Dreamcoat.
A battle ensued.
I suggested that we listen to something completely different and unrelated to either Dorothy or Joseph but neither of the girls thought that was a good idea so I told Rachel that since dancing in the living room as Miriam's idea that Miriam would get to choose what to listen to first and she chose a Dorothy song so that's what was going to happen. After we listened to Miriam's music then it would be Rachel's turn to choose a song.
This solution obviously didn't hold water with Rachel—obviously because tears started flowing out of her eyes. She shouted, she screamed, she tantrumized every part of her body. And then she wrote me an angry letter and hid it in the confines of her bedroom while she was in timeout. I found it tonight and asked her what it was about, so she told me.
The picture is the part of the ordeal when I suggested we listened to neither Dorothy or Joseph, which made both the girls cry...which apparently, again, made me feel such obvious mirth.
Life isn't always rainbows and butterflies and one day Rachel will learn that. Today wasn't that day, though, because she definitely got her rainbow—we had a nice sun-shower while we were doing the dishes and a big double rainbow appeared in the sky. It was beautiful. 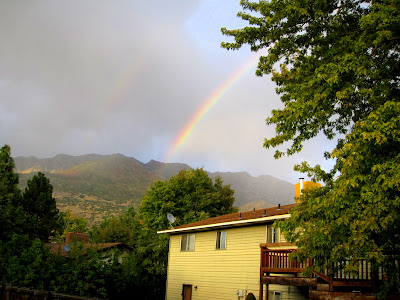 We went out to dance in the rain. Rachel insisted on having her photo taken with Miriam, who was a rather unwilling counterpart. 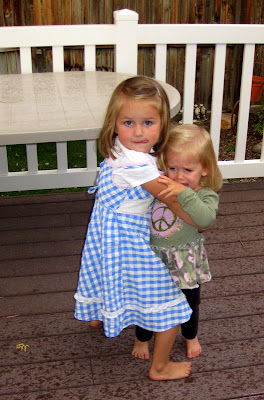 But she had fun dancing and twirling and curtseying. 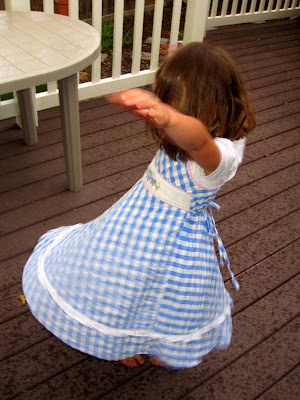 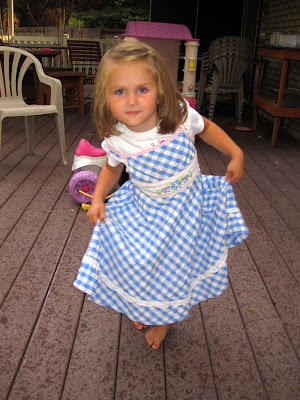 It's nice that rainbows come out, sometimes, to melt away our troubles. Or at least thaw them out for a while...our troubles came back shortly after we went inside. We had story time for a full half hour, which wasn't long enough for Rachel, apparently, because when I told her story time was over she threw another fantastic fit. It was horrible, truly horrible.
But after I fought her about brushing her teeth and getting into her pyjamas and going potty...and had rocked her and tucked her in and then rocked Miriam and tucked her in, Rachel asked me to come back and give her a hug. So I did.
"I'm sorry that I screamed at you, Mommy," she said. "That was mean."
"Thank you for apologizing," I said. "That helps to make me feel better."
"I love you," she said.
"I love you," I said.
Maybe there is a somewhere over the rainbow—I believe that place may be the mythical land known as "rational thinking." Sometimes it's closer than others.
Posted by Nancy at 1:20 AM