When I was in kindergarten we learned an alliterative verse for each letter of the alphabet that we'd chant every single day. There were twenty-six of them (obviously) but I can only remember two.

My name happened to be featured in the verse for the letter N, which was (as you've probably gathered from the title of this post), "Nancy Newt needs naps."

Now that I'm a mother I have come to enjoy both naps and newts (in that order because naps are way better than newts) but as a five-year-old I found this verse rather offending. First of all—Nancy Newt?

(Yes, I'm reaching here—Numbat sounds too similar to Dumb-bat so it wouldn't have worked at all. There aren't really many creatures that begin with the letter N. Naked mole rat? I don't think so).

It had to be Nancy Newt—a slimy creature, the pet of witches, lover of dark and scary places.

And then there's the whole nap thing. I'm pretty sure I began shunning those long before kindergarten. I loathed how my babysitter would make me take a nap because I was "so little" while she'd let my brother (who was "only" 2.5 years older than me (as if that even makes a difference when you're 4)) and her son (who was my age only properly proportioned (ie. he maybe didn't look like he was 2)) play outside. I could see their long shadows dancing through the curtains while I sat in bed and seethed at the ceiling. Naps were lamer than lame.

Nancy was not a newt and Nancy certainly didn't take naps!

I came home from school and outraged complained to her mother, who took it up with the kindergarten teacher, who was in her last year before retirement and—although kind enough—was rather set in her ways. When my mom suggested changing the verse in some way—Nicholas Newt, for example, could be the one in need of a nap, or Nancy Nightingale could nibble...nectarines—Mrs. Thornton was aghast.

"Change the words?" gasped Mrs. Thornton. "But I have said it this way for many, many years!"

"But have you ever had a Nancy in your class?" my mom might have asked (because I am totally making this conversation up).

"Well, no, but I simply couldn't change the words now. I have said them the same way since I very first began teaching," likely when dinosaurs were still roaming the planet. "Nancy should be honoured to be in the poem. We say it every day!"

"That's part of the problem," my mom might have sighed before continuing her explanation, because not only was there a vain repetition of my name every single day at school there was also a girl named Allison.

Allison and I did not have an amicable relationship.

Everyday Allison would be sure to sit close to me—not too close but just close enough—and then she would leer in my face and scrunch up her nose as menacingly as a kindergartener can as she chanted, "Nancy Newt needs naps!"

One day—several days into the school year since we didn't get to the letter N until after we did the letters A through Z (with one new verse introduced every day during the first few weeks of school)—I decided to get my revenge and when it came time for everyone to gather on the carpet to recite our alphabet verses I made sure to sit as close to Allison as I could—but not too close, mind you.

My revenge cut fast and cold (as revenge is meant to be served), coming on the very first letter of the alphabet.

And do you know what Allison did? She told on me. She went and cried to the teacher about it, about how it hurt her feelings, about how mean it was.

And do you know what happened to me? I got in trouble because "changing the words to the verse was wrong."

The proper verse, in case you were wondering, was "Ally Alligator eats apples."

That wasn't the only time I got unjustly punished in Mrs. Thornton's class, but Mrs. Thornton wasn't all bad. She did knit little stockings (big enough to hold a small candy cane) for every single child in the class for Christmas, so...that's a redeeming quality, right?

Anyway, it took me awhile to get over the whole Nancy Newt thing. And it's possible my family still teases me about it.

Whatever, I'm so over it.

Ahem. So, perhaps I'm not as over it as I thought. But my girls really did find a newt today.


At first we thought it was a lizard, but it's really an eastern newt and "the eastern newt is often confused for a lizard, particularly in the eft (juvenile) stage," so we're totally not alone in our error. It would be easier to classify this newt as a salamander if it was behaving decently and was found near a body of water, but no! It was walking across the pavement all lizard-basking-in-the-sun-like. Apparently eastern newt efts will travel across the land for two to three years before finding a new, more aquatic, home.

What we found was what's called a red eft—the intermediate stage between larva and adulthood of the eastern newt, named for its vibrant colouring (the adults aren't quite so brightly hued and in fact turn green (though the spots they keep). Apparently red efts will crawl out of their larval puddle and set off in search of a new place to live—sometimes traveling, completely terrestrially (quite lizard-like), for two or three years—before completely metamorphasizing into its adult form.

"Can we catch it?" Rachel begged. "Then we can have a lizard and tadpoles! That's so many pets!" 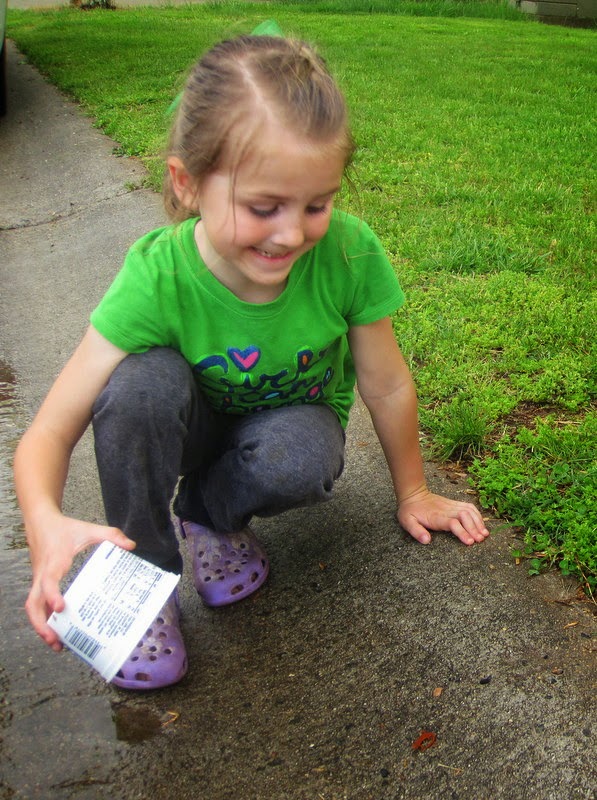 I told her she could catch it, we could identify it and enjoy it for a while, but then we'd have to let it go.

So, here it is, in all its glory, at the bottom of a sour cream container:

"Is it poisonous?" Rachel wanted to know, "Because red and orange are warning colours."

"Yeah, that's to warn predators not to eat them," I said, "But you can probably pick it up."

And then I read that "their skin secretes a poisonous substance when the newt is threatened or injured" and quickly added, "Never mind, don't touch it!"

Right. Rachel's the child who refuses to touch the frogs. Why in the world would she touch a newt?

Now if I had to Miriam to go ahead and touch it...that would be different because she probably would.

(This website says to just wash your hands—so I suppose you shouldn't ingest the toxins but touching them is fine...like they're not poison ivy newts or something like that).

Reading that "only 2% of the larvae even make it to the eft stage," in spite of the toxin (which, is kind of weird because are the larvae secrete the toxin as well...or only the juveniles/adults? Wikipedia doesn't say! But this website says that the larvae are not toxic so if you were an animal that wanted to feast on eastern newts obviously the larval stage would be the one to target, which perhaps explains the whole 2% survival rate thing), made me feel much better about the survival rate of our spring peepers. I'm pretending that our froglets that hopped away into the wild are going to flourish.

"Please can we keep it?" Rachel asked. "This will be even funner than tadpoles!"

"We can't," I said. "We'd have to get a whole aquarium set up. You can't keep a salamander in a plastic bucket like you can a tadpole. But," I offered, "I'll take your picture with it before we let it go."

She was all over that idea—obviously...from the way she's nervously eyeing the newt. 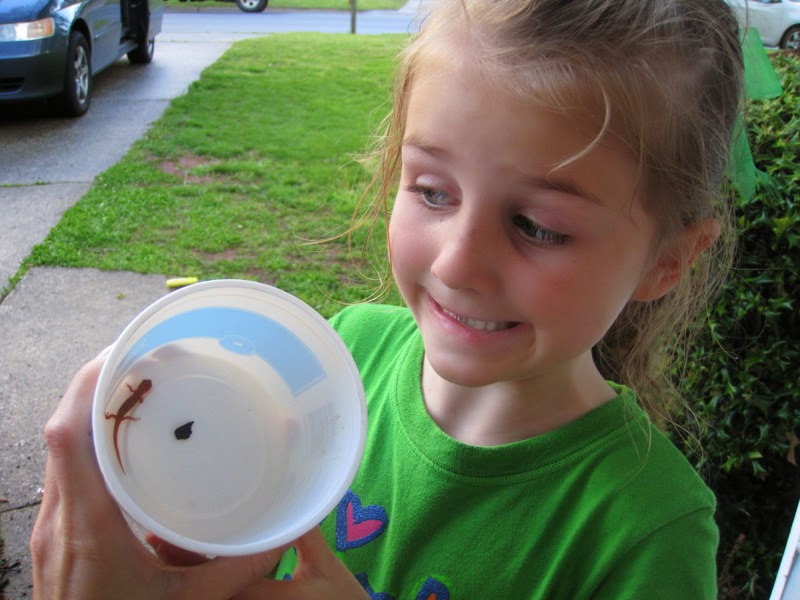 Here she is actually smiling at the camera, with a lovely post-thunder-storm haze misting up in the background. I love spring storms in the south. When they don't involve anything too scary. 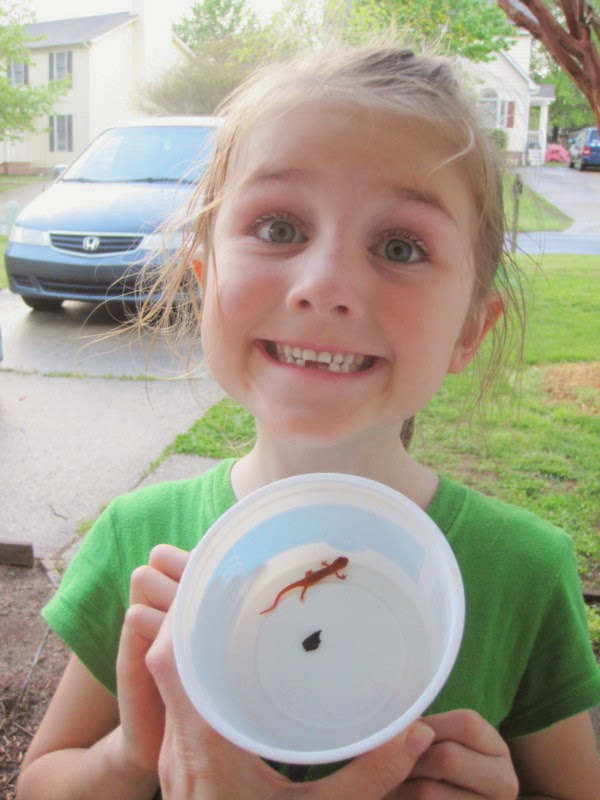 We went to Lowe's this evening to run some errands right after we released the eft so we were telling Daddy everything we learned about eastern newts.

"It's called an eft," Rachel said.

"Huh. Well, that's interesting?" he said with a small smile on his face.

"Yes!" he said. "Who comes up with names for these things?"

I think it would be a rather humorous—though crass—"children's book for adults," like All My Friends Are Dead and things like that. It could be an opposite book of newts.

This is eft up: This is eft down: 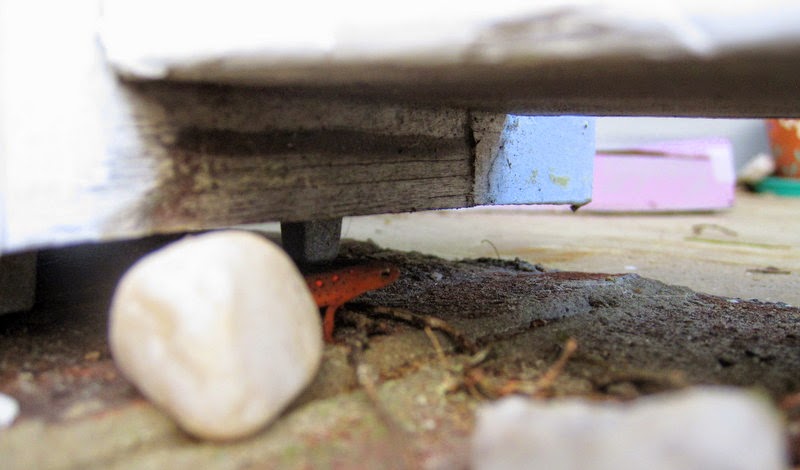 That's really as far as my cleverness goes. I suppose you can only go as far with eft jokes as you can with dam jokes. They're both wildly inappropriate (perhaps not wildly) yet nary a soul I've met can cross a dam of any sort without cracking at least one. Now that we know about juvenile newts...I don't know that we'll be able to contain ourselves either.

In other news tangentially related to this post, Andrew's busy working on his final paper. I learned at book club that some women take luxurious baths while their husbands are boringly studying their brains out. I don't. We don't have a luxurious bathtub. So I write instead.

So, he's in his "office" writing and I'm out here writing and we hear the clink of fresh ice being dumping in the tray.

We have a new fridge—with an ice maker. We just hooked up tonight—all by ourselves (after Sister C. showed me how this morning when she came to fix some of our lights and lift a stove into the back of her truck all by herself). It was wildly exciting (definitely wildly this time—you should have seen the state the kids were in). The kids all brought their bedtime cups and filled them up. And then Miriam requested ice.

"I want ice, too! Grandma said we'd have crushed ice!" she said.

"We won't have ice until tomorrow, sweetie," I explained. "We just hooked up the water, so now the freezer has to fill this ice tray with water, let it freeze, dump it in this box, and then you can have crushed ice!"

"Okay!" she said. "I get it! The freezer makes the ice and dumps it in the tray. Can I have some now?"

"There's nothing in the tray yet—look!" I said.

"Tomorrow. We will have ice tomorrow," I assured her.

Soon after she went to bed Andrew and I heard the tell-tale clatter of ice in the freezer.

"Hey!" Andrew said as he walked by my chair. "That's exactly what I just said."

He made for the kitchen to check out the fancy ice, we talked for a few minutes and then he went back to his writing.

Then at 10:05 PM he chats this to me: "'As discussed previously, measuring civil society strength is difficult due to a disappointing dearth of data.' Boom. Alliteration master."

"I am writing about alliteration right now," I wrote back. "I kid you not."

Then, at the same time we quoted different things amounting to the same thing.

"Same!" he said, from Arrested Development.

Sometimes life is just funny like that.
Posted by Nancy at 11:26 PM