Andrew rode his scooter to school on Thursday morning and posted this message on Facebook when he got to school:

So, I was riding my scooter to school this morning when some sort of bug crashed into my neck. It didn't make a mess, so I didn't worry about it.
After I sat down at my desk, I started to hear a buzzing, like there was a fly around my head or something. I kept looking around, but couldn't find anything. Meh. Stupid flies. I kept working.
10 minutes later, the buzzing hasn't stopped. Then I feel something crawling in my shirt. I panic, run to the bathroom as steadily as possible, and discover that there was a bee in my shirt. AN ACTUAL BEE WITH A STINGER. A stinger that it fortunately decided not to use (I don't know why it showed such restraint).

So now there's an angry bee flying around the men's bathroom. Sorry everyone!


About half an hour later he posted this:

Now I have to use the bathroom but am terrified of going in there, since Angry Shirt Bee will probably take his revenge on me. Dilemma.

He ended up going to a bathroom on an entirely different floor simply to avoid going into the bathroom with the bee.

Grandma and I spent the day staining the deck and I informed her that I'd managed to make an appointment to attend a session at the temple that evening. Sometimes these appointments are hard to get and the temple is booked through a couple of weeks (there are only two sessions on Thursdays). Grandma seemed rather concerned about us going on Thursday evening, even though she'd told me we could go whenever we'd like.

"Six o'clock session," she fretted. "Hmm...I think that will work."

I thought she was worried about having to put the kids to bed so I assured her that they could stay up until we got home.

We left for the temple as soon as Andrew got home from school. I brought along some snacks since we'd essentially be missing dinner. I held out a string cheese to him and said, "Do you want some cheese?"

"Only if you want it," he answered.

It was a pretty funny slip up.

The session was wonderful—it was Andrew's first time watching the new movie (he fell asleep the last time we went). After the session we walked around the grounds to find a path connecting to a city park. We're planning a primary temple excursion and there's a tri-stake young single adult conference the same day we planned our temple trip so we can't use the picnic area at the stake center (which is adjacent to the temple). We found the path, checked out the park, and hurried home to relieve Grandma.

Benjamin was terribly excited to have us (specifically me) back home. Grandma said he behaved well while we were gone but he was still a little offended at being left behind and would hardly let me put him down once I walked in the door.

After the girls were in bed, Grandma pulled us aside for a little conference.

"I have to talk to you about something very important," she said. "It's about Dad."

She got very emotional, her eyes got all red, and she seemed to be having trouble catching her breath.

"I'm going to need your help," she squeaked out.

Here I should mention that Grandpa hasn't been feeling well. He had a vertigo attack a couple of weeks ago and hasn't been able to get un-dizzy since. When we skyped with him on Sunday Grandma was insisting he go to the doctor—and he went, joking that if he had a brain tumor he hoped it would be an aggressive one. By Thursday all we knew was the doctor had prescribed some pills, hoping for an easy fix before getting into things like MRIs and things like that.

Our thoughts immediately turned to the worst.

It was quite a funny trick, but perhaps even better was that we had him sleep on the couch so that when the girls got up on Friday morning he'd be the first person they'd run into. They were both so excited to see him, though Rachel had to do a couple of takes before her groggy mind figured things out. 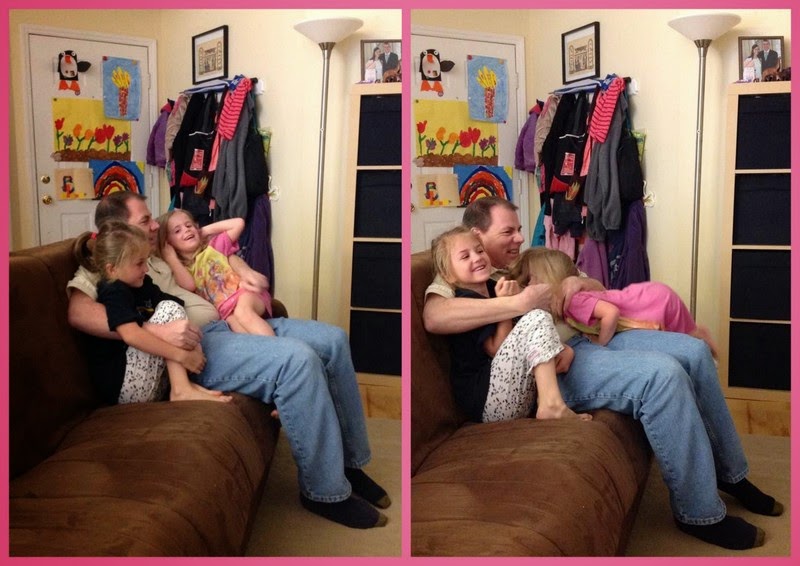 Grandma booked her flight out months ago and every time we skyped the girls would ask, "Why can't Grandpa come out?" so a few weeks ago Grandma decided to just look at tickets for him and ended up finding a really good deal. We've packed the weekend full of adventure so we can get in a lot of fun things before Grandpa goes back home (early, early Tuesday morning).

It was a pleasant surprise!
Posted by Nancy at 6:24 PM