Rachel's class had an outdoor field trip scheduled for September 21st. They got rained out and the trip was rescheduled for October 28th, but then had to be postponed because of Boosterthon something-or-other (a pep rally, it seems). Finally, it was (once again) rescheduled for today, but on Saturday the teachers went to check out the trail and found that the big storm we had a couple of weeks ago downed so many trees on the path that it made for rather treacherous hiking.

We got an email saying the trip was cancelled again, but a few minutes later got another saying they'd found a way past the bulk of the damage and the trip would proceed as planned.

The kids were so excited!

Helping herd fifty eight-year-olds on a six-mile hike with a nine-month-old baby strapped to my chest somehow seemed like a fine idea, though. Of course, when I signed up for the job I didn't realize it was going to be a six-mile hike. Not that there's anything wrong with taking a six-mile hike, even with a baby strapped to your chest. I simply wish there had been a post-script of sorts revealing this little truth to me. Something like, "Beeteedubs, when we say 'walk with the kids from the school to the park' we really mean 'a six-mile hike, roundtrip.'" Because then I could have brought, like, the hiking backpack/baby carrier rather than the mei-tai/diaper bag combo I had going on today.

But we all survived.


We made it to the park and the kids had a wonderful time on their field trip, learning about early American settlers and even earlier American First Nations. I had been worried that after our 2.5 mile hike to the park that we'd be busy hiking around all day (because that's what we did when Rachel's class went here in grade one (but they took buses that year)). I was quite relieved to find we were just walking from station to station and having mini culture lessons and such.

They got to do fun things like use steel and quartz to make sparks (and later explored using bow drills for the same purpose, it was a pyromaniac's paradise): 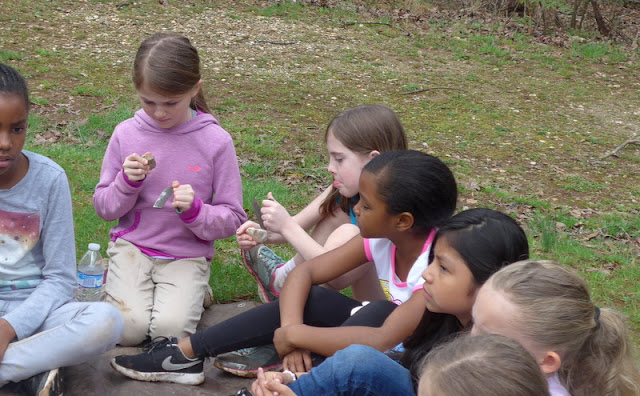 Here they are churning some butter (which they got to sample on saltine crackers): 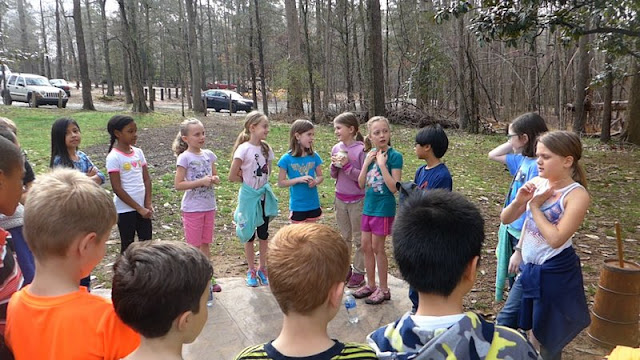 They got to use a two-person saw to saw through a log: 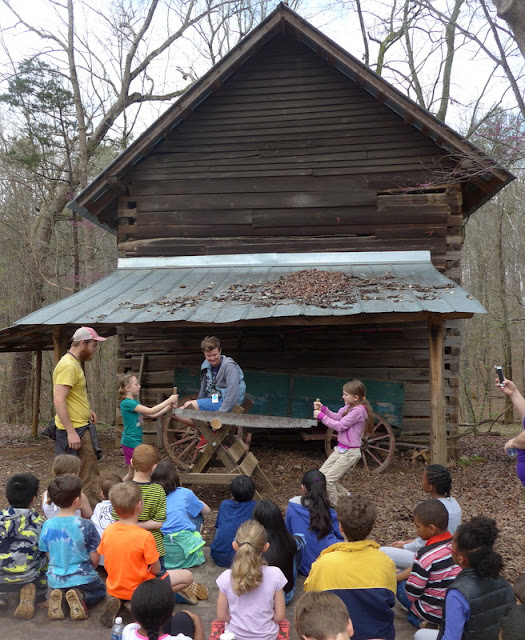 And they got to use an atlatl to throw a spear. Here's Rachel taking her turn: 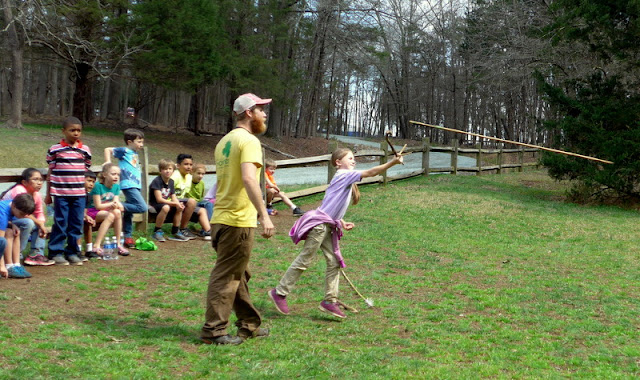 Chances are there were even a few activities that I missed mentioning here. We had lunch in there somewhere, for example. Oh, and storytelling! The counsellors told the tale of the Tailypo again, but this year the kids took it like champs! No one cried and, hopefully, they were all able to settle down to bed easily for their parents (after all that hiking, I should think they'd settle down no matter how scary a tale they were told).

Two years ago Rachel banished a fan from her bedroom because the cord "looked like the Tailypo's tail" and she had nightmare for weeks, maybe months. She still won't come near that fan, actually. And I know she wasn't the only one who took that story rather hard (because other moms on the trip told me their kids struggled, too). This year, though, the kids all seemed braver. And rightfully so.

One year older and wiser, too, and all that. Two years in this case, I suppose.

The walk (read: 2.5 mile hike) back to the school really wasn't so bad except that it was more uphill than the hike out had been and the kids were all tired from running around all day. I kept coming across kids sprawled out across the trail calmly claiming to have broken ankles. I kept telling them that if they could calmly inform me that they tripped and broke their femur that their femur was just fine.

Sometimes eight-year-olds can be quite melodramatic. Rachel and her friends kept in good spirits for most of the way, though: 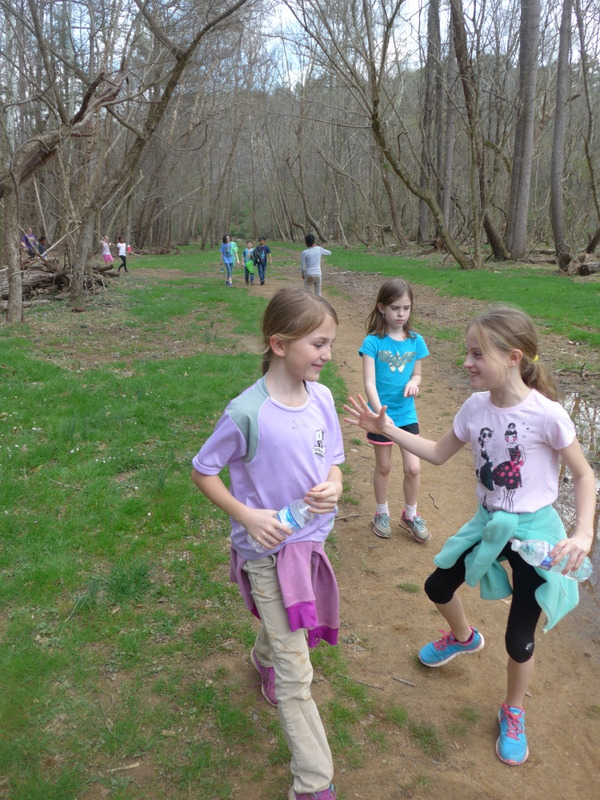 It was a beautiful hike: 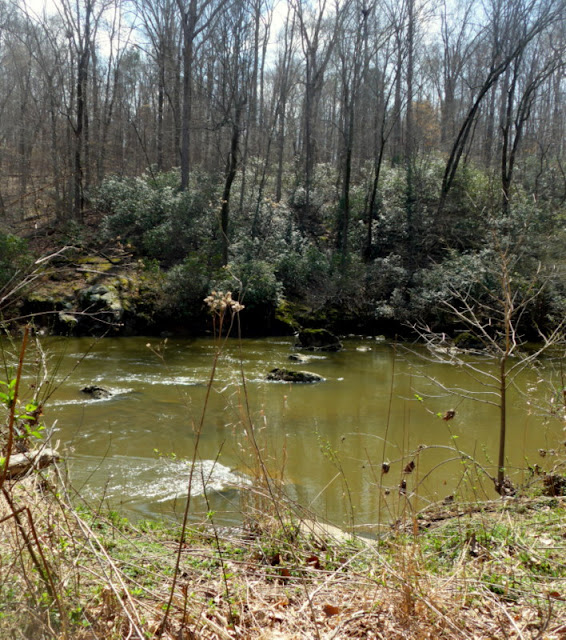 Here's what Zoë's face looks like after she's been in the front carrier for approximately six hours: 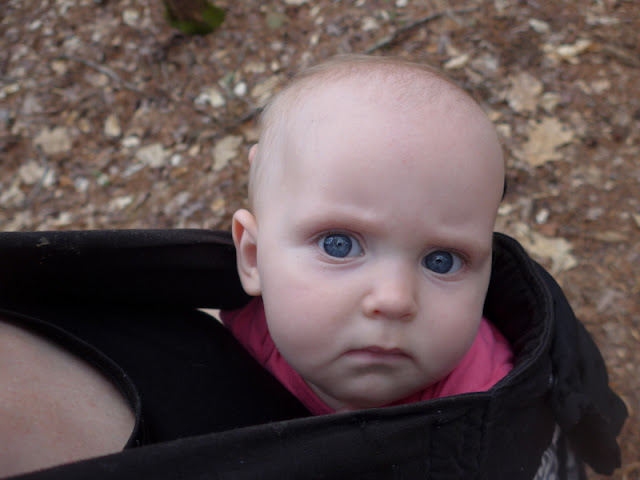 I never took her out—she nursed in there and slept in there and ate applesauce and crackers in there. Poor girl. She also did a lot of peeing in there and soaked right through her diaper. I probably should have taken her out at some point to change her and assess her needs a bit better but there just wasn't any time! Her little legs looked like they'd been getting a little uncomfortable, so I'm sure she was happy to get out and stretch at the end of the day!

Truthfully, she didn't seem to mind being carried around all day, though, and almost seemed to appreciate that I never put her down (except at the end when she was getting hot and crabby). She hardly fussed and mostly snuggled. She was living the dream today. I carry her around a lot every day but I also put her down a lot so I can do other things (like chase Benjamin or do the dishes) and she finds this rather offensive.

Still, I took her out of the carrier the minute we got to the school. She's nearly twenty pounds! I had to put her down for at least a minute. And what does she do? Crawls over to Rachel and makes Rachel hold her.

Side story: School floors are really gross so by the time she'd crawled across the room she'd picked up a lot of grime on her hands. Before she reached up to Rachel she looked at her hands, stuck her little tongue out, and gave one of her hands a big ol' lick! I rinsed her hands off before letting Rachel hold her just because I was so grossed out—it wasn't even invisible germs I was worried about (I suppose she's picking those up all the time, too) but actual, factual dirt and who knows what else. Her little hands were filthy!

Did I mention we headed to Miriam's classroom? I don't remember if I did. She asked if I'd come for a visit until the end of the day (we got back to the school about a half hour before dismissal) so I did.

Here's Rachel and Zoë admiring a poster Miriam's been working on: 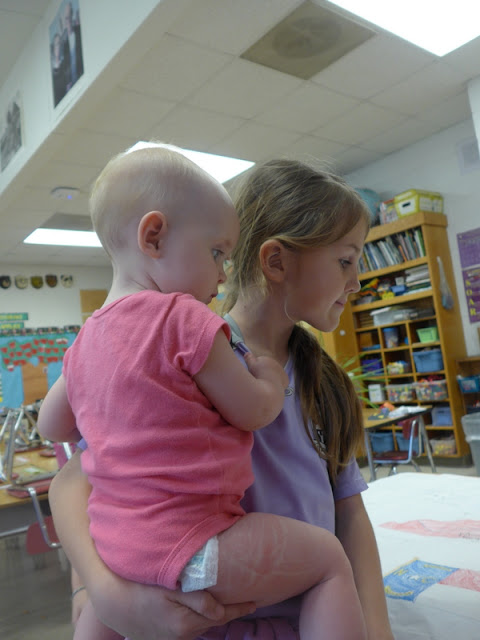 To keep Miriam (and her buddy Parker) busy at school, their assistant teacher (my friend Suzi) has been giving them research projects to do together. They read books and collect information and then synthesize it on a poster. A few weeks ago Miriam had been working on a report about Eleanor Roosevelt while Parker had been working on Charles Darwin. This week (and I guess a good chunk of last week as well, considering today is only Monday) they've been working together to learn about North Carolina: 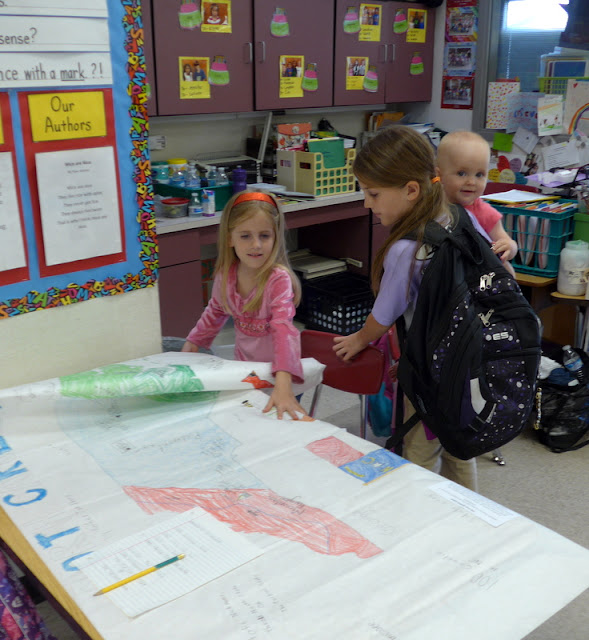 We're pretty happy with our school, evidently.
Posted by Nancy at 12:25 AM