We tried to go to the aquarium this morning but it's closed for renovations, apparently. Andrew looked up the hours online but didn't visit the actual website where it quite clearly says that it's closed. No one was too broken up about that. Instead we headed straight for the next item on our itinerary: Fort Raleigh National Historic Site, which is the site of the lost colony of Roanoke. 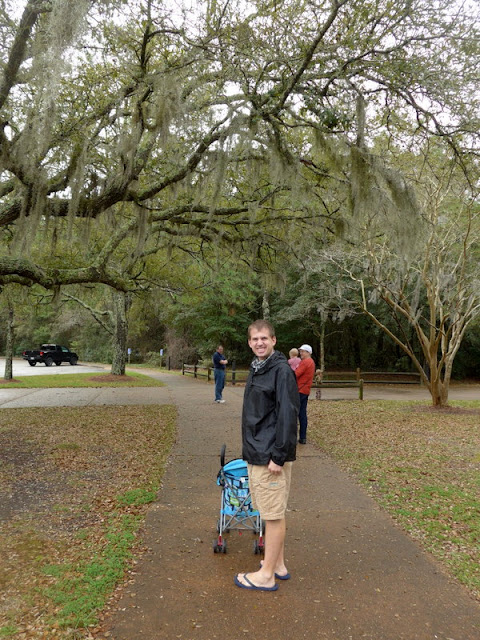 The earthen walls that the colonists built are still standing today, but all the houses were dismantled by the time Governor John White returned to the colony from a supplies run to England. Where the colony disappeared to no one really knows. Here are some of us standing within the wall: 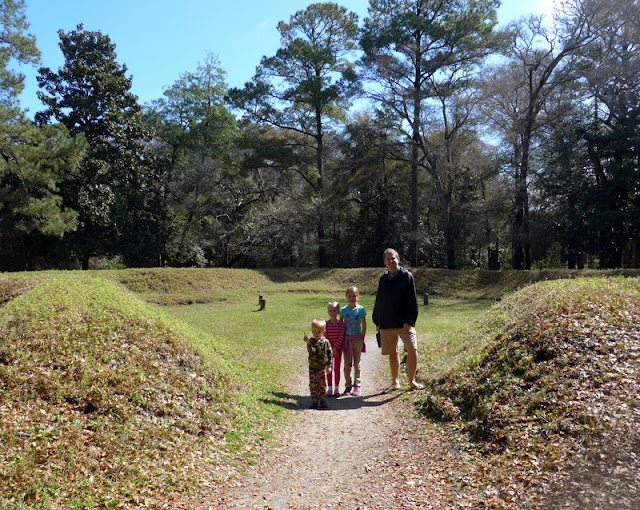 And here are some more doing a little yoga inside the fort: 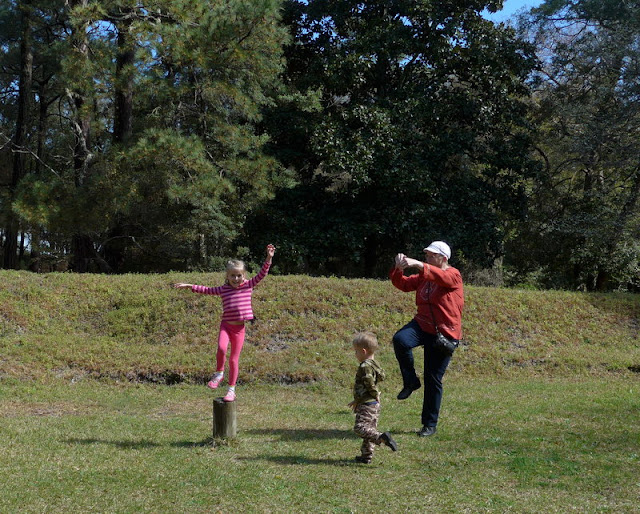 There's an amphitheatre on the grounds that they use for a show during peak tourist season. We got to check out the stage, but there weren't any show times. Here's the entrance to the theatre: 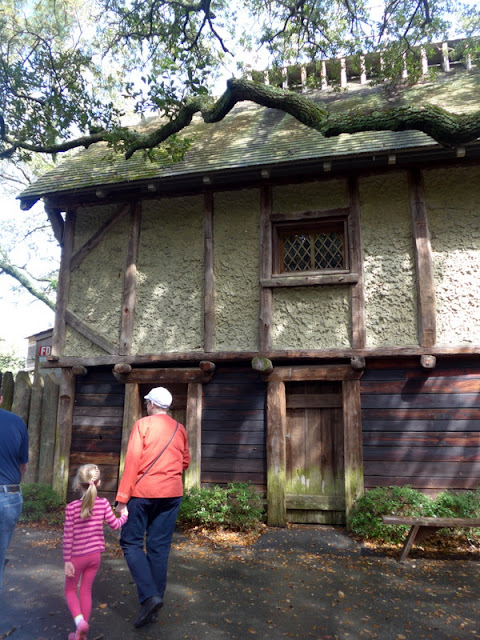 And here's the theatre itself: 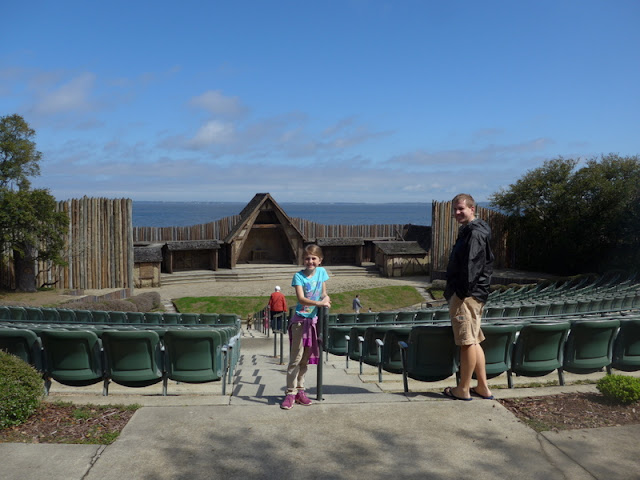 How fun would it be to see a show here with the ocean right there behind the set?!

The kids went to explore the stage and Benjamin got rather excited and called us all over.

Grandma looked at me with her "translate, please" face on. It took me a minute to get there, but when it clicked in my brain I said, "A better view. If you just go through this room there is a better view."

We all followed him because he was so excited about it. He's usually a little easier to understand than that but in his excitement to show us his discovery he forgot to enunciate. What he'd found was a little door leading to backstage--and a spectacular view of the Roanoke Sound...or whatever body of water is on this side of the island. 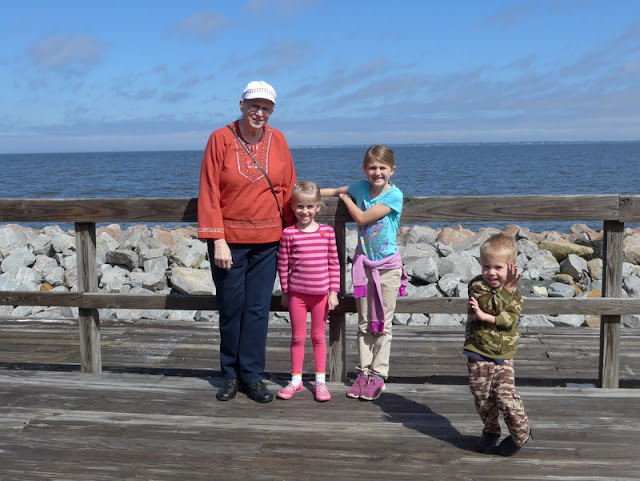 He is such a goofy poser these days. This is what I get when I ask him to smile for a picture: 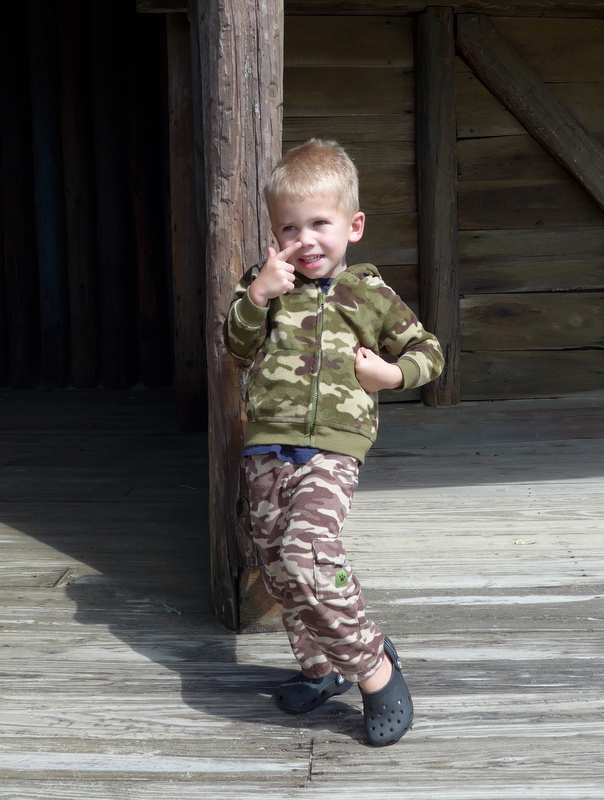 Grandma and I told the kids that they couldn't go up in the backstage area of the fort. But then Daddy (who didn't hear us tell the kids not to) did this: 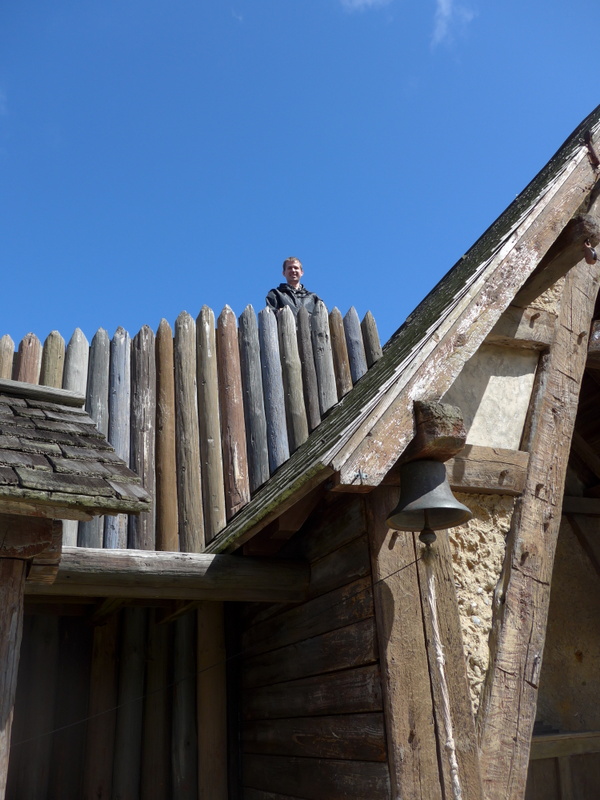 And then Daddy encouraged these two to join him (with my blessing): 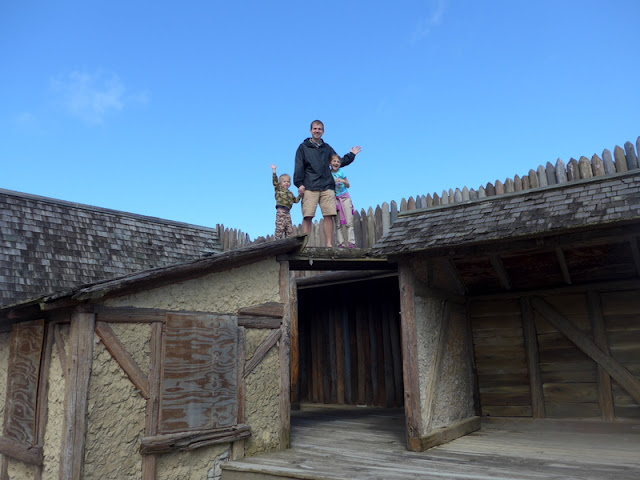 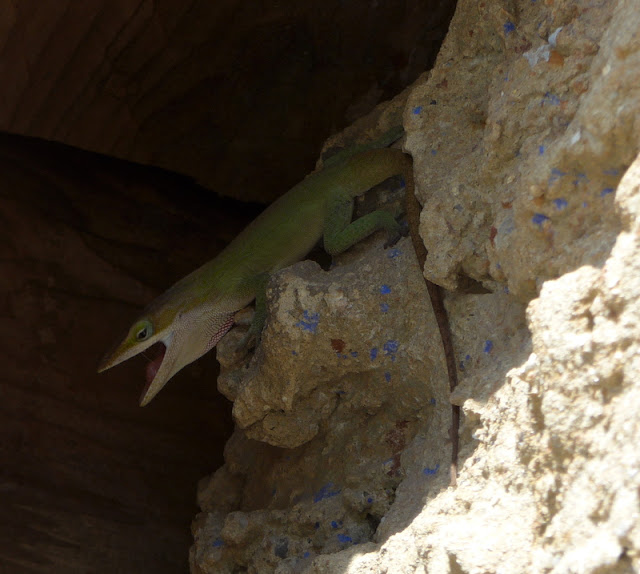 We went on a little hike to explore the island on the Thomas Hariot trail (as sign encouraged us to hike while imagining that we're seeing everything for the very first time, as the colonists were--new trees, new bugs, new animals). We hiked down to the sea: 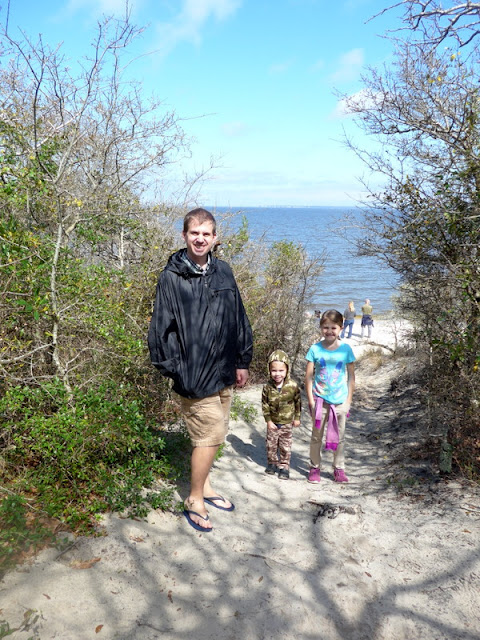 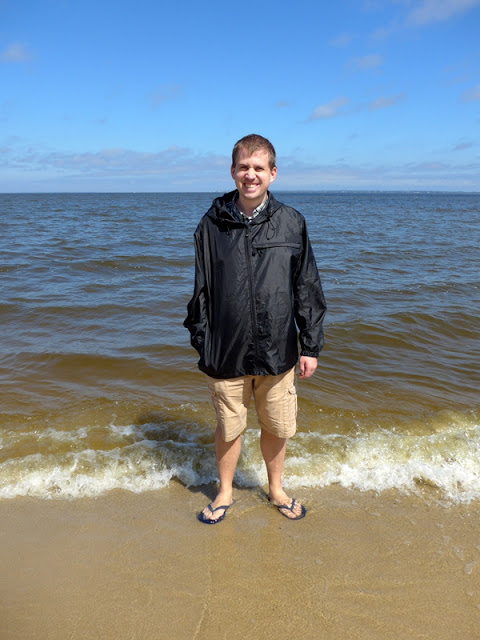 And then we had to go find Zoë and Grandpa, who hadn't joined us on the hike because the stroller kept picking up piles of pine needles. I ended up languishing behind everyone else with slowpoke Benjamin, who had to gather every acorn he saw. When I turned around to admonish him, once again, to pick up the pace, I had to laugh: 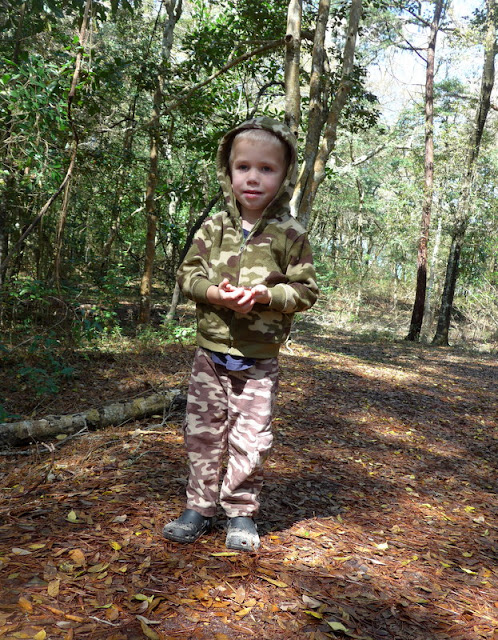 He was perfectly lined up with brown camouflage pants blending into the trail and a green camouflage jacket blending in with the greenery. It's a good thing we didn't leave him in the woods! I can only imagine what we'd tell the park ranger. "What's he wearing? Well...camouflage."

Speaking of funny conversations, Grandma got a phone call the other day so we all listened quietly as she spoke her side of the conversation. At one point she said, "What's my husband's name? Oh, Bob."

It turns out the person she was speaking to said, "What's your husband's friend's name? No. The contractor." But we didn't hear that part.

By the time Benjamin and I emerged from the woods, Rachel was busy trying to earn fifty cents by climbing this branch all the way to where it splits. 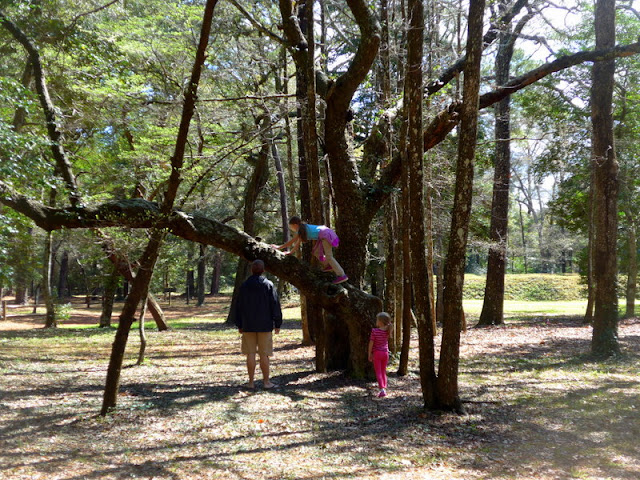 She's got a thing with heights, though, so it was Miriam who ended up fifty cents richer. 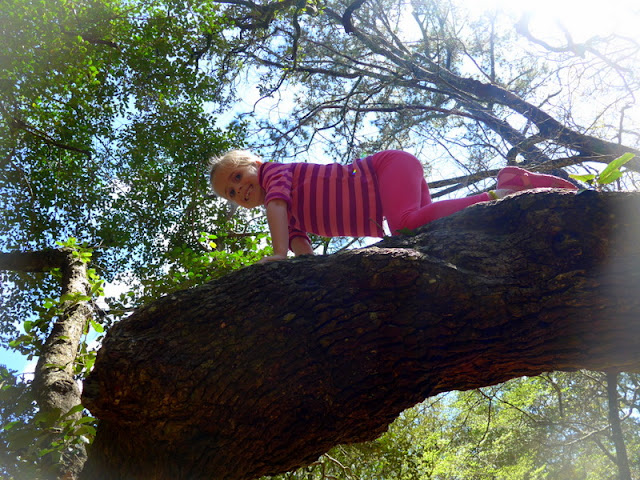 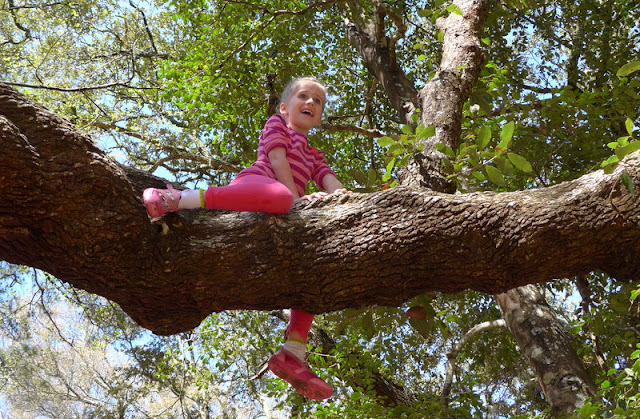 Here they all are by a big tree draped in Spanish moss. We took a picture for Bumpa: 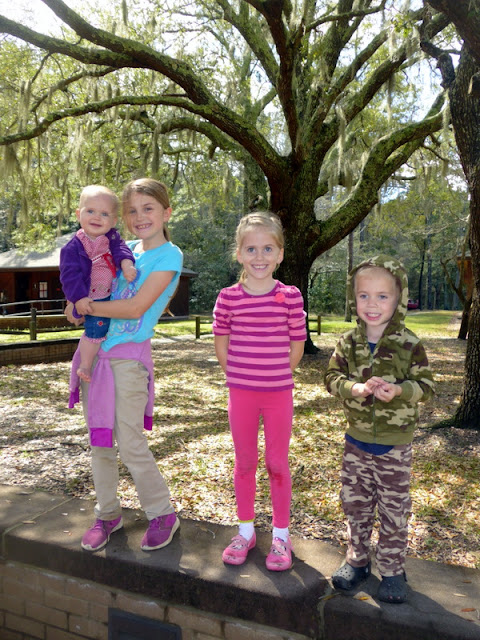 And that was our little visit to the Lost Colony. Overall it was pretty good, although they might want to think about redoing the video they show in the visitor center--it's 32 years old (and it shows)!
Posted by Nancy at 11:02 PM