I had to look this up because I was super confused about it. We left Fort Raleigh (the lost colony) and put "Kitty Hawk" into our GPS because that's where the Wright Brothers made their first flight, right? So we're driving down the road and the GPS is telling us we still have several more miles to go when we see a sign for the Wright Brothers monument, so we ditched the GPS and turned down Wright Memorial street. We weren't even in Kitty Hawk yet! We were still in Kill Devil Hills.

Kill Devil Hills claims to be "the birthplace of aviation," while Kitty Hawk says it is "first in flight." I suppose they're both right. And wherever we were (Kill Devil Hills, it turns out), we had a fun time at the Wright Brothers Memorial.

It was so windy (it's always windy--so windy that in October 25, 1911 (exactly 98 years before Miriam was born) Orville Wright managed to float in a glider for over ten minutes (he took off into the air and then just hovered there because the wind is that full of lift (and his glider design probably helped a bit, too))) and we couldn't find a picnic table around so we decided to picnic in our van. We put the backseat down and the kids sat there and ate before going to check out the museum (which I missed because I stayed behind to nurse Zoë).

Here's a picture of the monument and in the lower righ-thand corner is Grandpa with the three older kids: 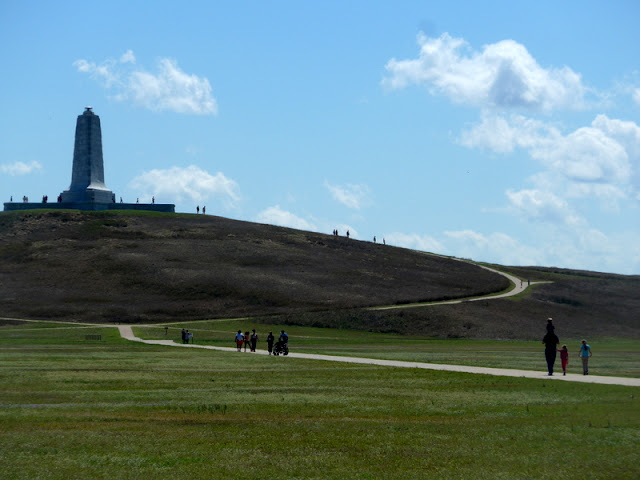 Andrew and Karen waited to walk with me and we really had to bustle to catch up with them. But we bustled between stopping to read signs and take pictures. Here's Andrew at the take-off point: 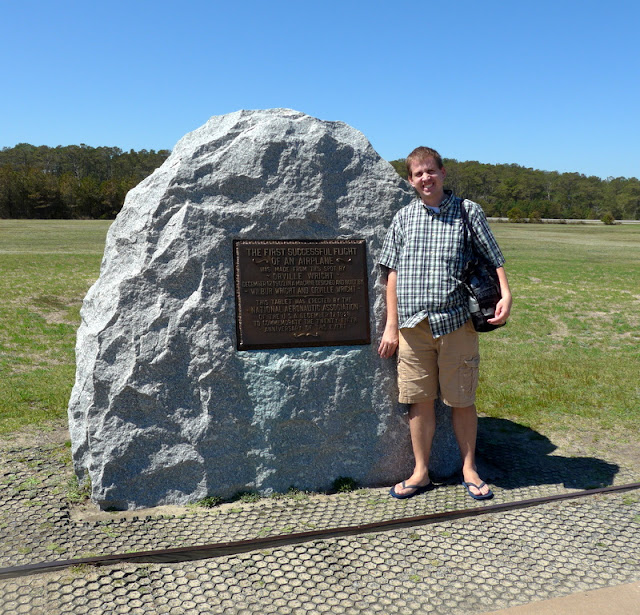 And here's me and Zoë with the monument behind us: 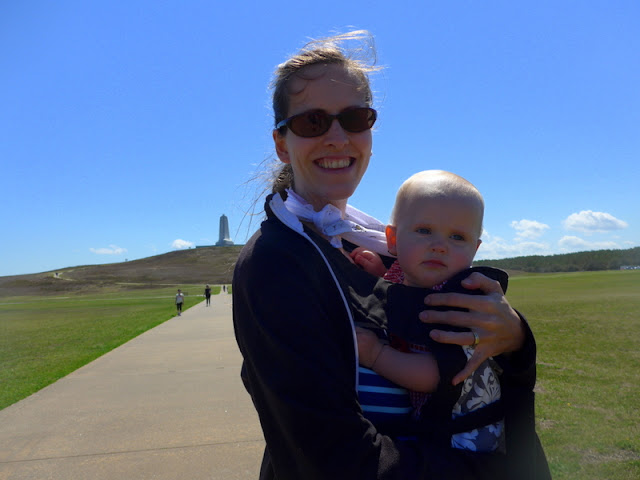 She wasn't a huge fan of the wind. We made it to the top of Kill Devil Hill to admire the monument in person. Here are the kids all stretching their wings to fly: 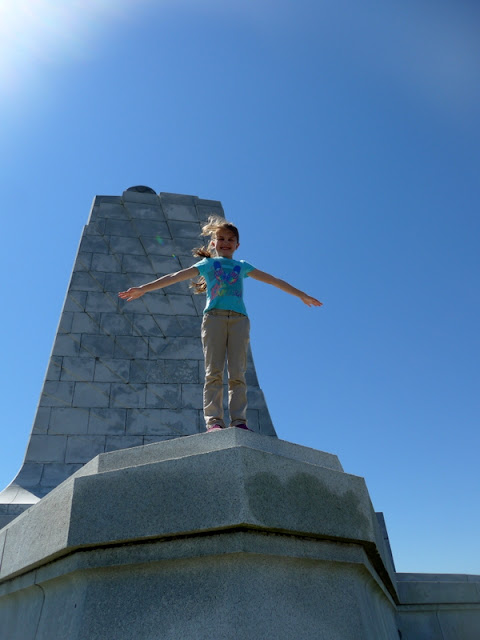 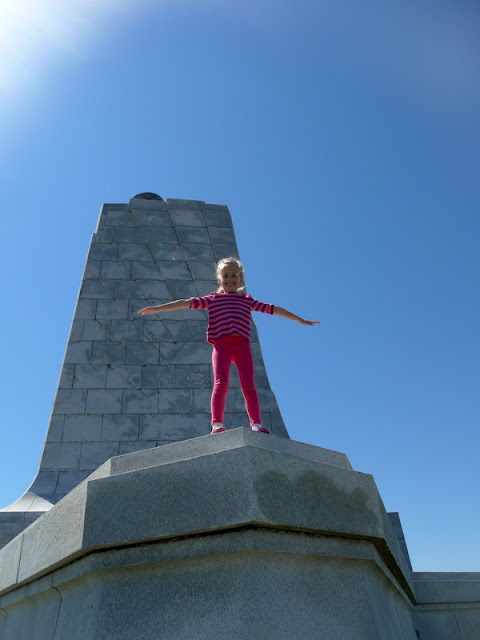 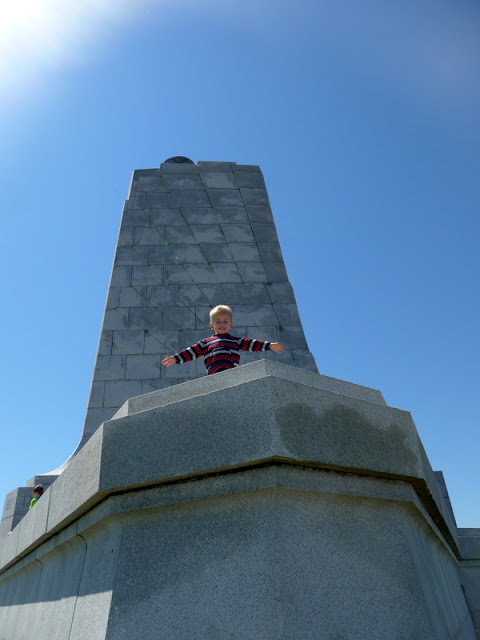 Benjamin rather enjoyed visiting Kitty Hawk/Kill Devil Hills. I think part of the reason is because he'd been learning all about the Wright Brothers lately. We finished reading their biography together this evening and on the very last page was a picture of Apollo XI because they took pieces of the original Wright Flier to the moon in the lunar module as a tribute to the brothers pioneering efforts in the field of aviation.

"I want to read that book next!" Benjamin said, pointing to the picture.

So I think we'll be looking for a copy of Who Was Neil Armstrong? in the near future.

The monument is really quite impressive. It was built in the 1930s, dedicated in 1932. Both Orville Wright and Amelia Earhart were there for the dedication (there's a picture, which Rachel was rather excited about because she wants to be Amelia Earhart for the third grade wax museum this year (maybe)). 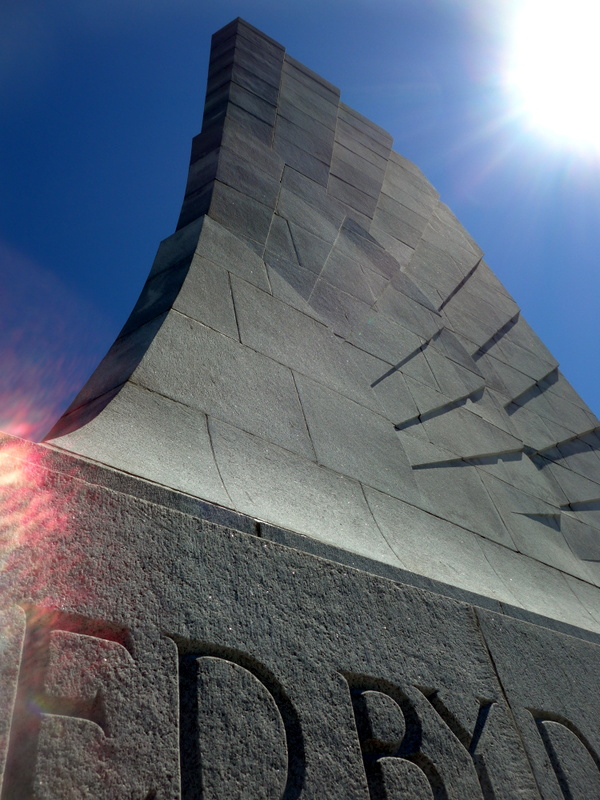 Here's Miriam in front of it: 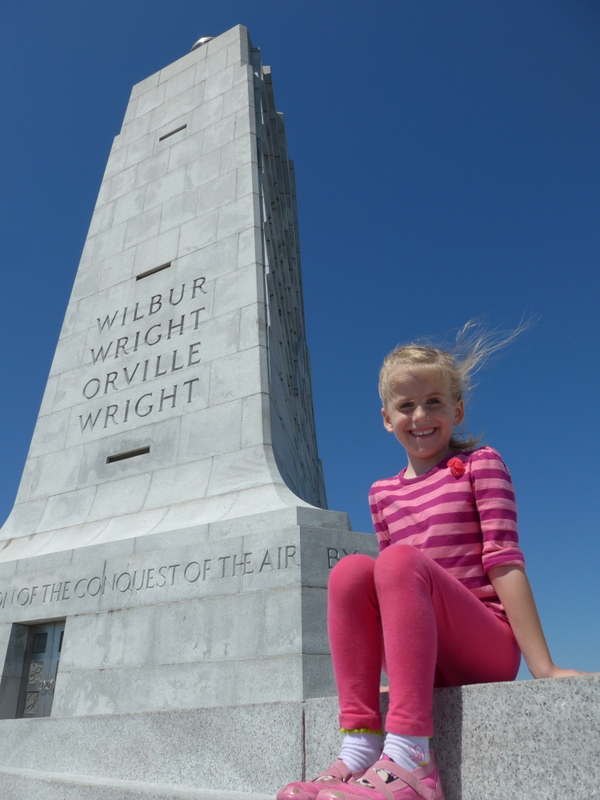 And all of us together: 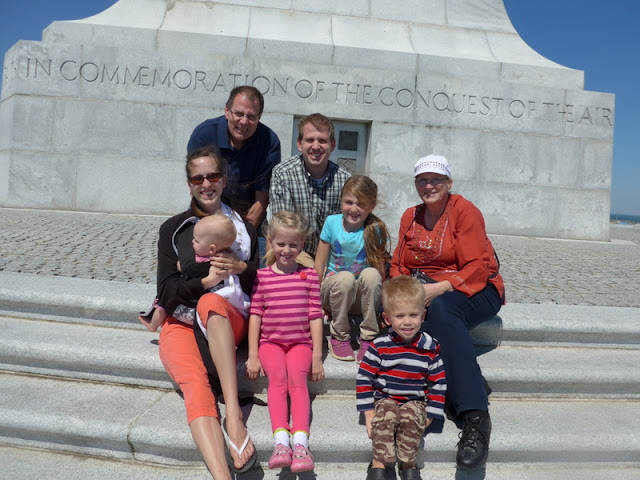 Zo even quit nursing long enough to take a picture with her head showing. She nursed the whole way up Kill Devil Hill. And all the way down. She must have been very hungry and/or thirsty and/or upset about the wind.

Here are the kids pretending to fly again: 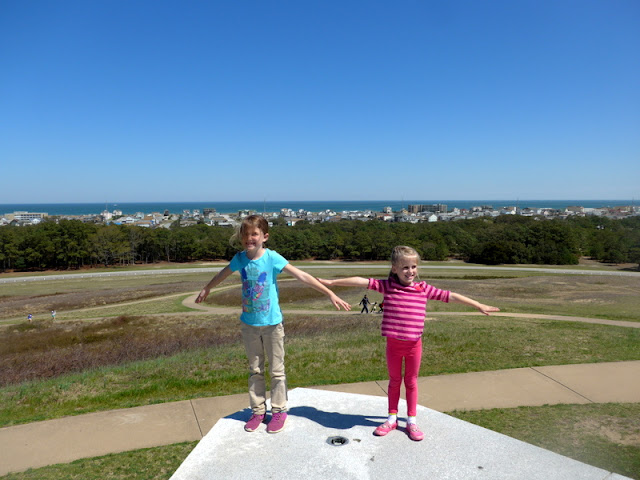 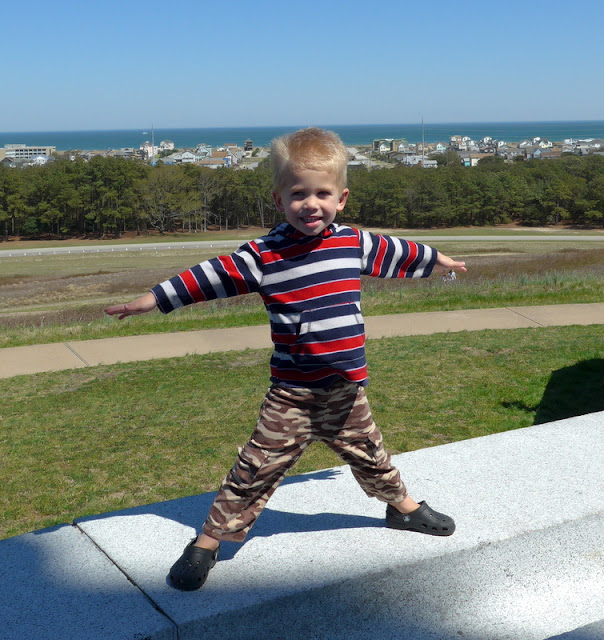 The girls in our family all earned fifty cents for walking along the "runway" rail without falling off. I even did it while nursing Zoë! 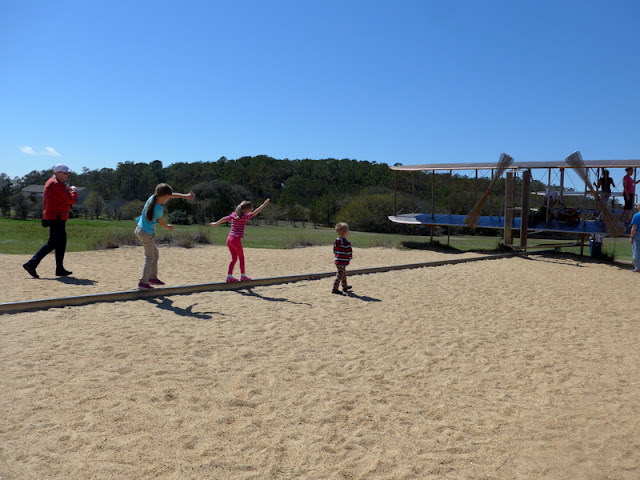 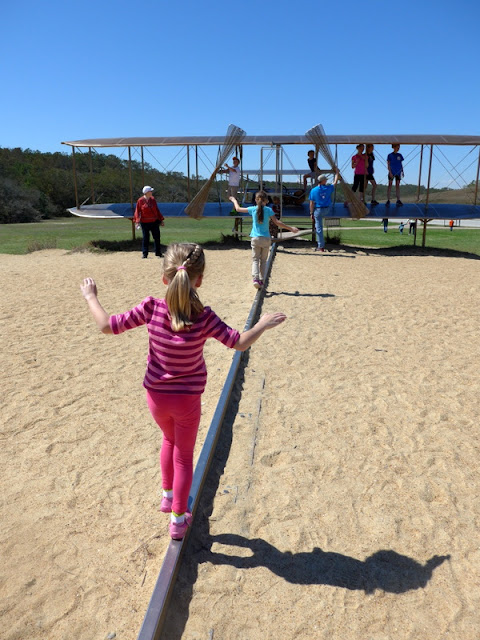 Here are the kids taking turns flying with Orville (I'm assuming, since this is a statue of the first photograph and Orville was the one flying then): 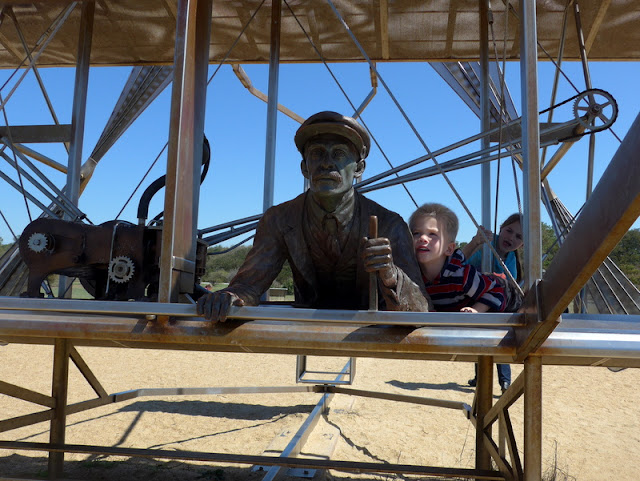 I just learned (thanks, Wikipedia) that their first attempt (on December 14, 1903 (fifty-one years before my Dad's birth)) failed (and I already knew that) because the weather wasn't ideal, they posited. The weather had been just right for flying the day before but because it was a Sunday they decided to put it off until the 14th. Probably they should have waited a couple more days because they had to spend a few days doing repairs, finally making their first successful take off on December 17. I thought it was neat that they chose to honour the Sabbath day, though! 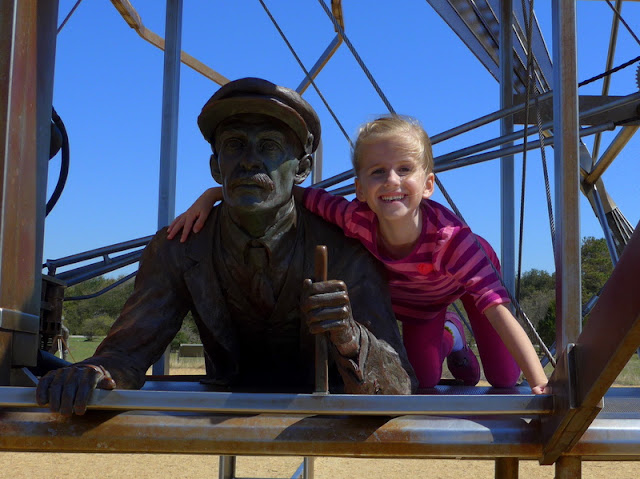 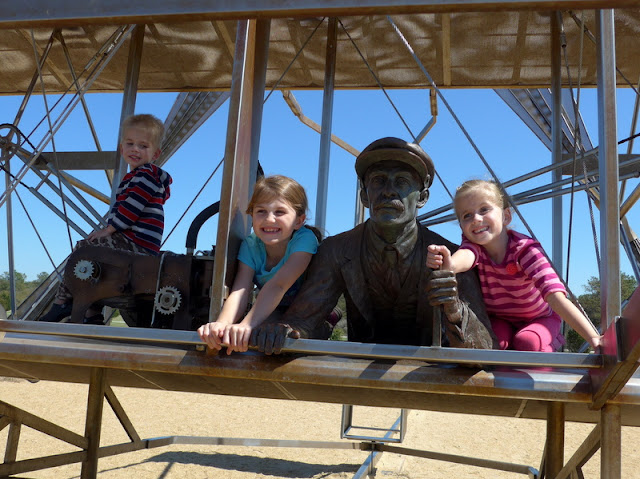 Zoë was super not impressed by Orville. In fact, she thought he was terrifying and spent the rest of the time there giving him major stink eye. 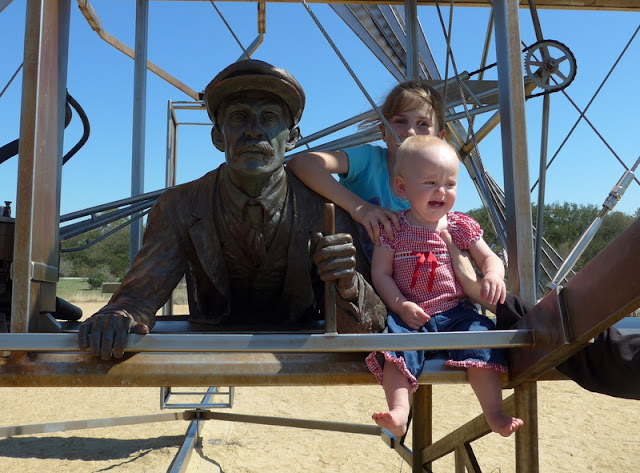 Here she is with Grandpa, still not fully recovered from her terrible encounter with Orville. 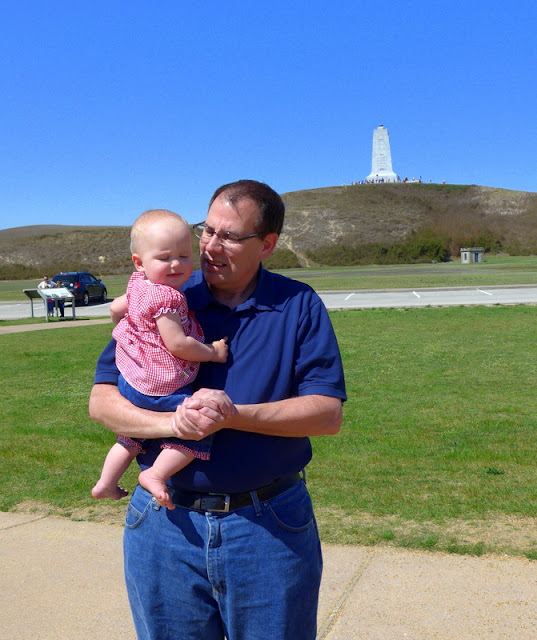 I think the kids earned fifty cents for climbing up here too: 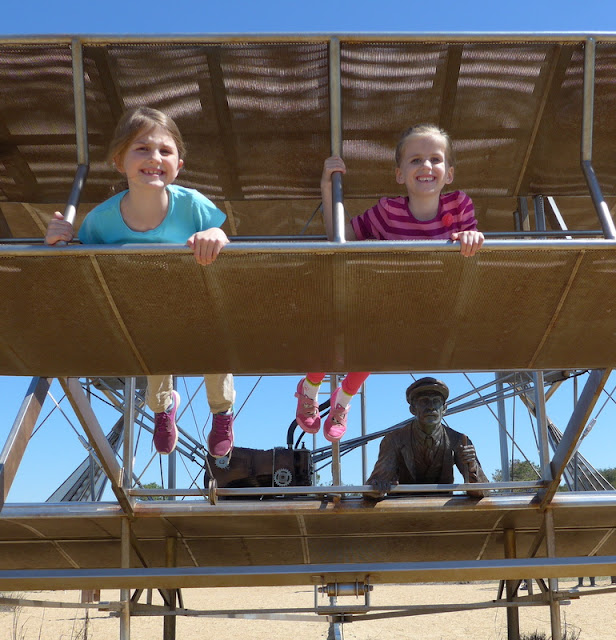 We're going to be broke by the end of this trip. 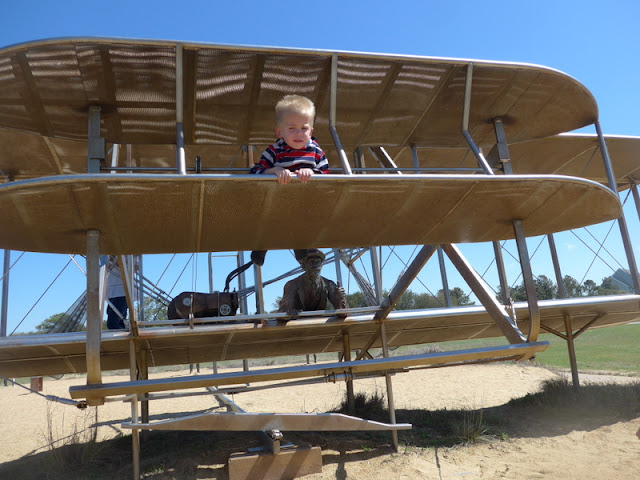 Andrew and I got acquainted with Wilbur: 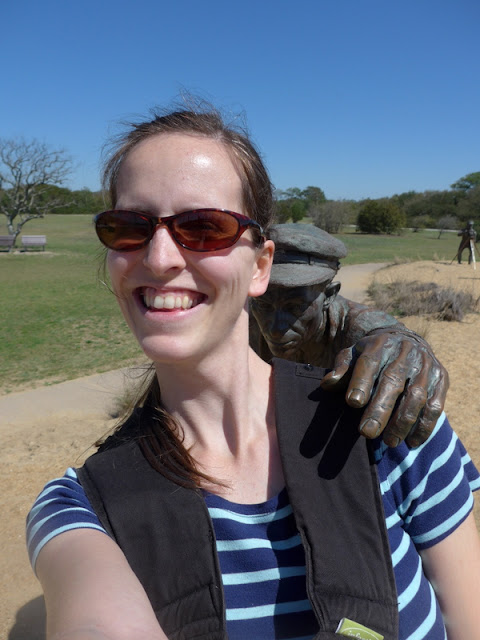 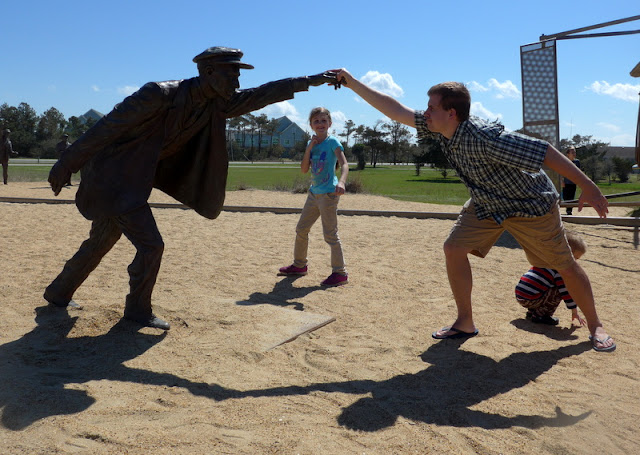 And we couldn't pass up the opportunity to let this clapping spectator hold Zoë. She does not take kindly to statues, apparently. 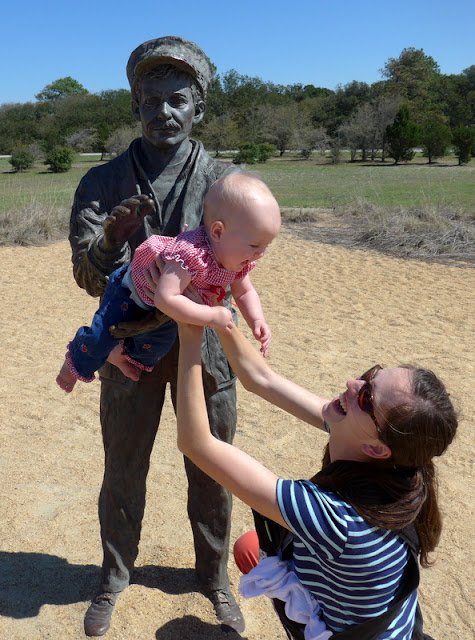 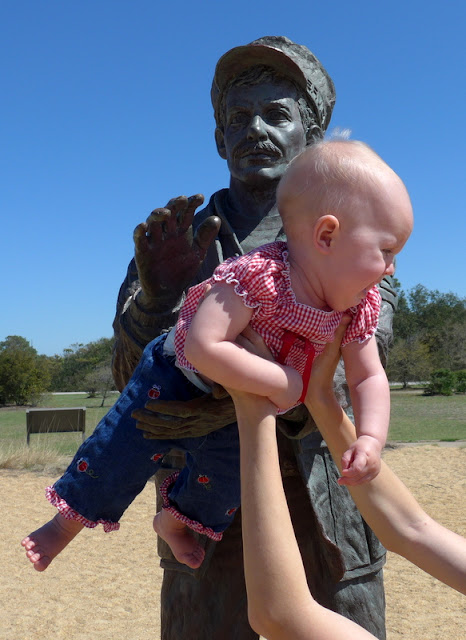 Everyone was very good at obeying the signs that said to keep off the grass. Prickly pear cactus is sprinkled around the Kill Devil Hill (hence the name?) so stepping off the path can have rather painful consequences. Andrew learned that when he visited the monument with his family as a little boy. He stepped off the path and got stuck by a prickly pear right on his poor little tosies (he was wearing sandals at the time). "And he never disobeyed ever again," Grandma told the kids.

I shot him a look.

"What?" he shrugged. "Maybe stepping on a cactus will have the same effect on him."

We found a bit of cactus lying on the path so we picked it up to move it off the path. Andrew took a picture wit it, for old time's sake: 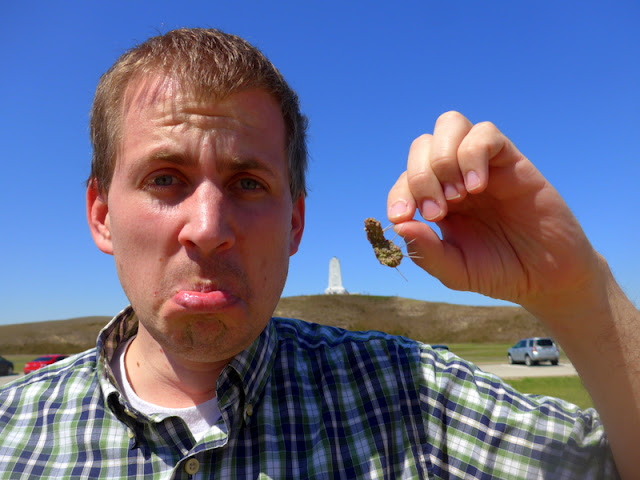 And Miriam kissed it (and for free (no one offered her fifty cents for this one)): 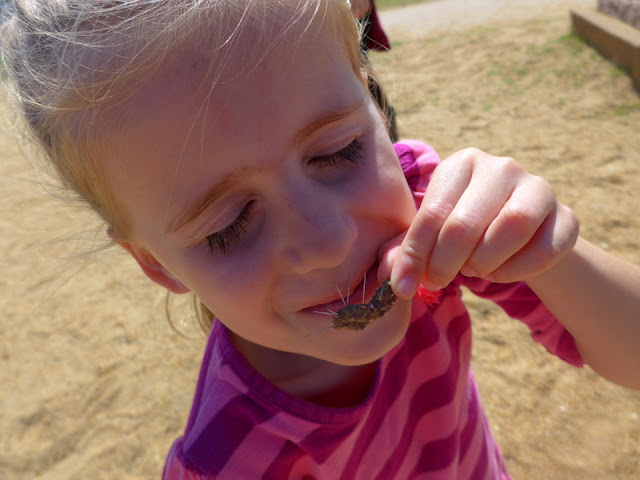 I'm glad we were able to check this off our bucket list. After all, you can't really live in North Carolina without making a pilgrimage to Kitty Hawk (or Kill Devil Hills, whatever), right?
Posted by Nancy at 11:57 PM