For the science fair this year, Rachel did a study on the fourth-grade classes at her school to test whether or not reading a story and doing practice math problems (from a book called Bedtime Math) would reduce math anxiety in the classroom.

I'll admit it was one of my contributions during our "what in the world should Rachel do for the Science Fair sessions," inspired by some background research I've been doing for a story idea I had, which in turn was inspired by a late-night nursing session following a late-night math review session.

I've had math on the brain lately and my story idea is, I think, hilarious. I told it to the older girls early in January and they spent the entire morning watching the kids so that I could finish writing it down. They want to see it as a book right away, but it still needs some work. And I need to figure out how to pitch it. But this is all besides the point.

Rachel had the four grade four classrooms fill out a survey about their feelings toward math, and then had the classrooms read either a story from Bedtime Math (the test group) or a fairy tale (the control group), told them they were going to have a pop quiz, and then administered the same survey about math anxiety (and then gave them a pop quiz).

She found that the classes that had read the math story experienced an 8.4% decrease in math anxiety, even right before a pop quiz! The class that read the fairy tale saw a slight increase in math anxiety. There was not a statistically significant difference in scoring, but with a long-er term study it's possible a change in scores could be tracked. Her study gave similar results to some more long-term studies done by actual scientists (which she talked about in her paper). She suggests that teachers get in the habit of doing math warm-ups in a risk-free environment, prior to a math lesson or examination, in order to allow math-anxious children to do their best work. 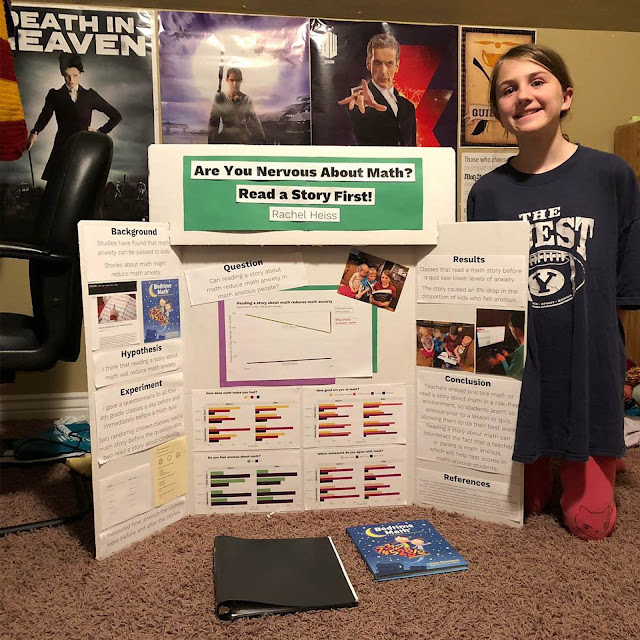 It was quite the project, involving several late nights and a few coding lessons from her father to get it all done in time. She did a great job though!

I wasn't sure I was going to make it to the Science Fair because I had to teach our co-op preschool the morning of the Science Fair, but once all the extra kiddos were picked up, I rushed my own little ones off to the school (our rush included installing both car seats in the van, so you can imagine what a rush it was). Preschool ended at 11:00! The Science Fair ended at 11:30!

We made it to the school and rushed to Rachel's classroom, said hello to Rachel, and looked at a few other projects (OxyClean is the best stain remover, one child showed) and then I let Zoë drag me around to look at projects that she found interesting. We ran into Rachel's friend Tayah in the hallway and followed her to her classroom to see her project and then to look at what projects more of Rachel's friends did.

And then the principal came over the intercom to announce the Science Fair was over and cheers erupted all around us. The kids seemed rather happy to have this project behind them.

Because the Science Fair isn't over and done with for everyone...

Rachel (and Kenzie and I don't know how many other participants) qualified to move on to the district-wide Science Fair next week!

Rachel is very pleased and excited, and so are we!