Even in her sleep Rachel is a very busy baby. Here she is during this afternoon's nap: 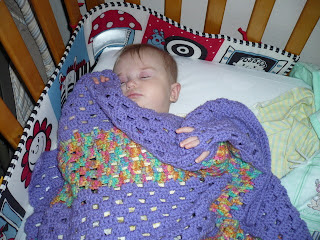 Look closely at her hands and you will see that she has put each of her fingers in the holes of the blanket. 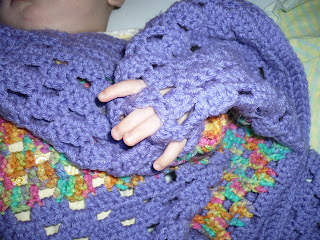 If we wrap her in a tie-quilt she gets her hands out and twirls the yarn ties in her fingers while she sleeps. It's rather cute, really.

She's always seeing what she can get her little fingers into--we are already wary of electrical sockets, she likes to roll over to the DVD player and push buttons, and she can find the smallest bits of anything on the floor. Every time we pick her up off the floor she has a handful of something: hair (probably mine), a little pebble (probably from the bottom of a shoe), or something else dangerously small. She could be a human vacuum.

We'll have to start her on Cheerios soon, she's that good at grabbing things. I've had my glasses snatched right off my face several times and she's recently started to put the soother in her own mouth (only to put that classic disgusted look on her face and yank it back out again...and then put it back in...it's a vicious cycle...oooh, yuck, oooh, yuck, oooh, yuck...). She loves to grab at eyes, ears, mouths, and noses and then pull and twist, so you might want to watch out for that next time she's on your lap.

We're still working on the whole "respect others" thing. For some reason she just does whatever she wants even though we tell her "no" or "be gentle." I guess we just keep telling her until she gets it. Andrew says that "no" is too big of a word for a baby. He's probably right--some people never understand the meaning of "no." Hopefully our baby will.
Posted by Nancy at 6:42 PM