We went to Jacob's Winter Dance Concert yesterday. The dance team is so small this year--Alison retired from coaching so I guess the new coach wanted to start out small. I don't blame her. If I had to deal with a classroom full of teenagers, all of whom are a little diva-ish (as most high school students, especially dancers, tend to be) I would certainly choose to start out with a small team. Because it was so small, Jacob got to be in a lot of the numbers. It was nice to see him on stage so much! 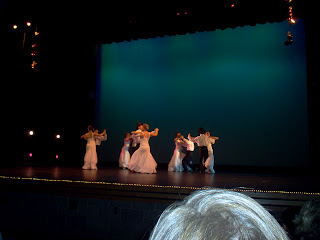 The concert went fairly well. Rachel flipped out a little bit when everyone started clapping and whistling at the very beginning but then a bunch of dancers in pink leotards came onto stage and started jumping around she became quite interested and settled down some.

Personally, I enjoyed the ballroom numbers the best. The drill team numbers were a bit much for me. For the finale they were all jumping around on stage in red and white striped, skin tight shirts and black boy-cut underwear. They seriously looked like they were doing an underwear commercial for Target. I commented to Andrew that they were wearing for their costumes what ballroom dancers wear under their costumes. It was a little ridiculous.

I spent a good portion of the concert standing in the back of the auditorium bouncing Rachel while she gnawed on the program. She lasted through the entire concert though, even if she ended up with little bits of red paper all over her shirt. 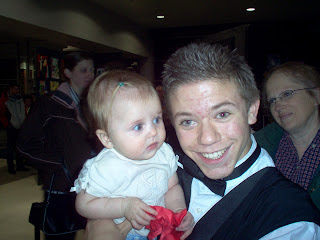