The Olly and the Hivey

If I were to wish to go back and repeat any one night of my life, and if that wish were actually granted, last night would not be that night.

Last night was one of those nights. It started off as well as could be. Rachel put herself to sleep again--for the third night in a row--which was really nice. She didn't fall asleep until around 11 o'clock, which I was fine with because the library is doing "extended hours" in preparation for finals so Andrew wasn't due home until late, late, late. Curse those extended hours.

I don't like being alone, so having Rachel stay up was nice company. She's only a baby though so eventually she had to be put to bed. I put her to bed at 10:30 and she was asleep by 11.

I bumbled around the house, trying to do a few things. Then I got online and started chatting with Andrew. Here's an excerpt:

12:24 AM Andrew: So I just got this weird bumpy rash on my arms
They're all pink
And itchy
And hot
Weird stuff
me: weird.
what does it look like?
Andrew: Lots of little mosquito bites
me: are more happening now?
Or are they going away?
12:25 AM Andrew: They're just kind of there
They've been there for the past half hour or so
me: weird
12:26 AM Andrew: I wuv you
Are you staying up for me?
me: I love you, too, ichy rash head.
I don't know.
I'm kinda tired.
12:27 AM Andrew: You can sleep - I give you my royal permission
me: I kind of want to see your rash though before you get in bed with the baby
12:28 AM Andrew: K, panic girl
12:29 AM
me: A rashy husband I can handle, but a rashy baby I cannot.
Instead of going to sleep, I then searched the internet for possibilities. Since I hadn't seen the rash, I couldn't really narrow it down. But neither Rachel nor I were experiencing anything like Andrew; I figured we were safe and went to bed.

At 2:06 AM, Rachel woke up with an agonizing scream. I picked her up, cuddled her, offered her the potty, and then tried nursing her. As I latched her on, she grabbed her eye with her hand and squeezed...hard. I know she squeezes hard because it's usually me she's squeezing. This set her to screaming again.

Andrew got home a few minutes later and Rachel was still up and screaming. His rash was all gone. I got Rachel calmed down by 2:30 and we all went to bed.

"Let me see," I said. Since the lights were on, I should have been able to see him but I didn't have my glasses on so he looked normal, just a little pink, to me.

I got closer. He looked like he had been terribly sunburned! He was red and blotchy from his toes to his neck and he had huge areas of blistery-looking things. 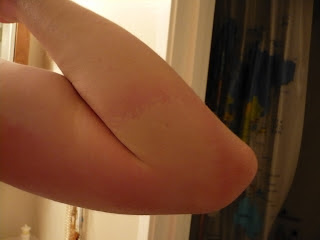 I turned on the computer and started researching again, now that I could see his rash, it was easier to find a description that matched. As far as I could tell it was hives. The deciding factor was when I searched for images and the first picture was a back that could have been Andrew's, the rash was so identical.

"Hives and angioedema form when, in response to histamine, blood plasma leaks out of small blood vessels in the skin, " I read to Andrew.

"You do have that," I corrected him, "That's probably what all those blistery things are."

We discussed things that could have caused the hives but couldn't think of anything he'd done out of the ordinary. Sometimes hives just break out inexplicably, I guess.

We went back to bed and a half hour later Rachel woke up screaming again. She had bad gas.

By the time the alarm went off, I felt like I had just gotten her to fall asleep again. It didn't help that she had been a regular wiggle worm all night long. I drifted back off to sleep, after telling Andrew to get up, and woke up again an hour later.

Andrew was still in bed, not that I blame him.

Needless to say, Andrew missed his first class for the day. His rash was all gone this morning, so that was nice. After he left for school, Rachel and I stayed in bed for two more hours.

I am still exhausted and so is she. I imagine that Andrew feels much the same way. Not a one of us had a good night's rest. Hopefully tonight is no repeat.
Posted by Nancy at 1:04 PM