My sister asked me to think of some memories about my grandpa and I figured I'd post them here, since this is basically our family history. We've been planning on laying out our blog in book format for a while but I write so much that the task seemed almost overwhelming. Andrew's been working on a script, since he isn't taking classes this summer and is just researching on his own and feels like he has a little spare time for such projects, that takes the blog (the whole thing) and switches it around to be in chronological order (instead of reverse chronological order as it is online). He even figured out how to bring the comments with it.

He's so smart! I could never figure something like that out.

That means that I don't have to go through and manually do all of that for the some-odd 1000+ posts that I've written either here or on our Jordan blog or elsewhere. All we have to do is insert pictures, but we were planning on doing that, anyway, since books require a higher DPI photo than a computer screen does.

When the script works properly we're planning on releasing it to the public on Andrew's techno-academic blog, so...you're welcome. Now onto my Grandpa. 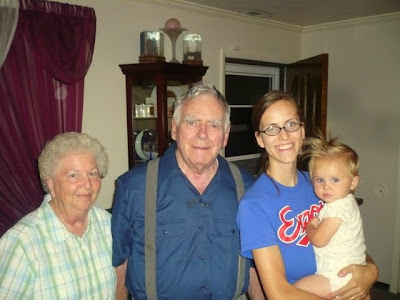 Me and Rachel with my Grandma and Grandpa Layton
I think the Grandpa my sister was referring to was my Grandpa Layton, since he's alive...and because it's Father's Day...I kind of figure she's compiling memories that we have of him for him. That makes sense.

The house that I associate with my grandpa is not the house they currently live in. I loved their old house. I was telling Andrew just yesterday how I think it would be cool to have a loft. My grandparents had a loft in their house. The stairs were right in the entry way and after going upstairs you could see down into the living room or the entry way. I loved to play up there while the grown ups either visited or watched a show together. It was like I was there with them but not at the same time.

It was even more neat when we got to sleep in the bedrooms just off the loft or on blow-up mattresses on the loft floor. Then it felt like we were sleeping in a tree house or something...or so my 7-year-old self imagined. It was exciting.

I also remember thinking their yard was amazing, or that it could be if it had a few improvements. I had it all planned out. The pool would go here. The swing set there. And the trampoline there...perfect.

After a few years, though, they moved into the basement suite and Uncle Cory and his family moved into the rest of the house. Visiting Grandma and Grandpa suddenly got a whole lot more crowded.

Whenever we visited Grandma and Grandpa, Dad made sure to take us to the Original Iceberg Drive-in in Salt Lake to get their thick, thick, thick shakes. Sometimes Grandpa would come with us, and if he did, we usually got to get burgers and onion rings, too. I was never able to finish those huge milkshakes. I don't know how many Iceberg cups Grandma found in her freezer over the years, forgotten, and full of refrozen, half-eaten milkshake. Those were mine.

I remember Grandpa's love for classical cars. He and Grandma had that old blue car...the interior was all original and I loved how fluffy the carpet was. It had really fluffy carpet!

Once Grandma and Grandpa came up to visit us in High River and we took them to George Lane Park. It was during a festival of sorts--perhaps Victoria Day or something--and there was a little car show. We had a hard time convincing Grandpa to take a walk with us on the trail by the river. He was old and his bones were tired...or so he said. Convincing him to go to the car show, though, was easy.

A few years later, Grandma and Grandpa moved into a new, smaller home--bigger than the basement suite, but smaller than their old house. The yard is humongous and they now have that trampoline and swing set (no swimming pool, though, darn it!). They also have a gigantic garden. I remember seeing Grandpa in the garden, watering the plants for Grandma. (I also remember the plastic chair that he sat on and had collapse right underneath him.)

He always seemed so helpful to me, rigging up a pulley system in the garage so that they could open the garbage can without having to go down the stairs, putting the glasses away after they had been washed...speaking of glasses, I always remember Grandpa putting ice in a big glass of milk. That was something I never understood.

I remember helping with the corn in the summers after we moved to Utah. That was a lot of work with a lot of helpers, but always worth it in the end with fresh corn on the cob and Grandma's creamed corn all year long as a reward! Grandpa was always right there, helping shuck the corn and break the cobs in half so that we could grate them easier.

Creamed corn was always featured at Thanksgiving. I believe I celebrated my first American Thanksgiving at Grandma and Grandpa's house. It was a little squishy, but cozy, with Grandma's southern cooking steaming on the table, some of which was familiar, some of which was not. She always made sure to have some "normal" vegetables for those of us who hadn't grown up on okra and turnip greens. I always wondered how Grandpa got used to eating that stuff and would chuckle to myself as I recalled the story of Grandpa's first time trying to make grits for Grandma and using almost every pot in the kitchen because he just couldn't get it right. Add a little water...add a little grits...add a little more water...add a little more grits...get a new pot...add a little water...add a little grits....He sure did love his Florida girl, but I'm sure it took him more than a couple of tries to really begin enjoying okra. 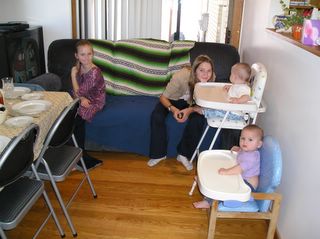 When I was little I loved visiting Grandma and Grandpa because that usually meant a visit to Temple Square. Grandpa was always willing to share his scriptural insights and his testimony of the gospel. I remember him joining in our family scripture when he was visiting us once and he started asking us questions about what we were reading and we all just stared at him. He had something to ask, something to point out, something he had learned, something he wanted us to learn after every verse. It really made me think about how much time I spent actually pondering the word of God. It was obvious that Grandpa had spent a long time doing so.

I remember a few times that we visited their ward on a fast Sunday and Grandpa would get up and bear his testimony, mentioning that he was so happy to have his family with him at church and that he wanted us to know that he had a testimony of the gospel and that we knew what his testimony was.

Grandpa was also a temple worker in the Jordan River Temple and I remember him mentioning that he really wanted to serve a mission, unfortunately Parkinson's got to him first and he never had the opportunity. He served in other ways, though. I can't remember how many years he served in the temple, but it was several consecutive years and was so important to him.

I appreciate the example he set of regular temple attendance. It was so wonderful to have him in the temple with me when I went through for my endowments, and to have him present at mine and Andrew's sealing. 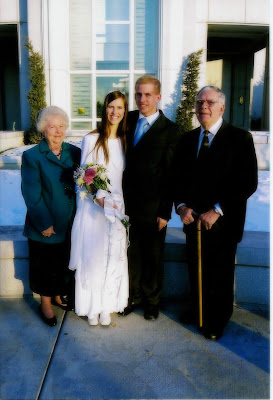 He has such a testimony of the power of the priesthood, as well. When my dad ended up in the hospital with heart problems, Grandma and Grandpa came down to wait with us while he had a triple bypass. When the surgery was over they let us in to see Dad. It was past 4:00 AM and we were all tired. Dad was still under anesthesia. We all went in and looked at him and told him we loved him. It was scary to see my dad like that--all sick and fragile.

Most of us just popped in and out; we wanted to make sure that Dad really was alright and then we wanted to go home and go to bed. Grandpa, though, lagged behind. I thought it might just be his shuffling gait, due to Parkinson's, that was keeping him behind.

"Come on, Grandpa," I said, linking his arm and tugging gently, "Let's go."

"I want to give him a blessing." He said.

"He's already had a blessing," I said.

And that was true. Andrew and his dad had given my dad a blessing before he went in for the angioplasty earlier in the day. It was kind of a foreboding blessing...and now we knew why...but it was a blessing nonetheless and it said that everything would work out fine in the end and I was satisfied with that. I was tired and I had a newborn baby and I wanted to go home. But I needed to help Grandma and Grandpa out to their car, first.

"I want to give my son a blessing." He insisted.

My mom asked what the hold up was, and so I explained it to her, and she said that he had a right to exercise his priesthood and another blessing was probably a good idea. And I probably was being a little irrational.

We called in another priesthood holder--I don't remember if it was Andrew or my Uncle Bruce--and Grandpa gave Dad another blessing. This one was more peaceful and reassuring than the blessing Dad had received earlier. I'm so grateful that Grandpa insisted on giving Dad that blessing. And I'm so grateful that he was able to stand in the circle, in place of my Dad, to help give Rachel and name and a blessing that Sunday, just 29 hours after blessing my dad. Grandpa wasn't always all serious, either, of course. He had a wonderful sense of humor and was always cracking jokes and playing tricks on the grand kids. But I already wrote about that.
Posted by Nancy at 12:54 AM