She left her heart in Sam Clam’s Disco

My sister Abra used to tell this joke about Larry Lobster and Sam Clam. I totally didn’t get it until years and years after she told it to me, but that’s what she gets for having an audience so much younger than herself. Not that she seems old anymore, but she used to when I was younger.

Larry the Lobster and Sam Clam were friends and they did everything together. They even died together. The only problem was that Larry was good and Sam was bad.

Larry was happy in heaven but he missed his friend, so one day St. Peter told him that he could arrange to have him visit Sam Clam in you-know-where. There was just one condition: he couldn’t leave anything behind. Larry the Lobster thought that was a deal he could make, so the next day he went down the elevator to visit Sam Clam.

It turned out that they had a wonderful time together. Sam had opened a disco and business was booming. They spent the whole day dancing and singing and at the end of the day Sam walked Larry back to the elevator and Larry went back up to heaven.

St. Peter met him at the gate. “Aren’t you missing something, Larry?”

You know, like the song…I Left my Heart in San Francisco…

If you happen to be 10 and you understood that joke you are way better off than I was 14 years ago. I was like, “Oh, ha, ha…that’s…funny…I totally get it.” But I didn’t totally get it.

Anyway, Rachel’s friend Sam moved away and I think he may have taken her heart with him. They spent Sam’s last day in Cairo playing together all day. When I told her to say goodbye because he would be moving, she kind of freaked out.

She screamed the whole time we were saying goodbye, pretty much, and much of the way home. Poor Andrew opened the door to find me carrying Rachel, both of us dripping in tears, from our walk home from the House’s house. 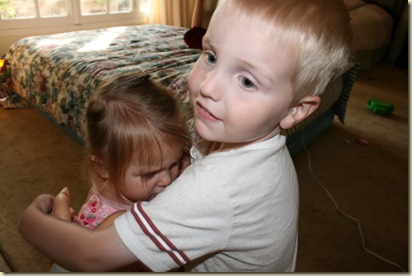 Rachel just hasn’t quite been the same since.

A few days ago Andrew put the movie Cars on before he left for school so that I could (hopefully) stay in bed a little longer. Ten minutes into the movie, Rachel ran into the bedroom. Tears were streaming down her cheeks.

“I’m ready moving Nyutah,” she answered bravely, as if she even knew what kind of headache and preparation that entails. It’s not something we plan on doing spur of the moment, “I wanna go Mrita.”

Nyutah and Mrita are how she says Utah and America, respectively.

“Why do you want to move to Utah?” I asked her.

“Sam’s in Nyutah!” she wailed and the tears started running down her cheeks again, having burst the dam.

We had to turn off Cars. I don’t think we’ll try watching that for a while. It was Sam’s favorite movie, see.

When we draw pictures of our family she always tries to throw in a couple Lewises for good measure.

“Ummm…nope. All those people are in Sam’s family. Try again.”

But I guess that’s kind of the role they filled while they were here. Family.

It’s not that she completely took over the place my own mom and sisters hold, it’s just that she was a great friend…and in the same time zone. Going to her just made sense.

Rachel just fit in with the Lewis kids, too. It was like she was an extra little sister or cousin. They just meshed from day one—everyone loved her and she loved everyone. They’ve definitely left a void behind them. But, there’s always America.

One night when we were visiting at the Lewis’s after dinner or tutoring or something, Sara brought out some little Oreos.

“You can have two because you’re two, Sam!” she said.

That reminded me of a video we took of Rachel a while back. The first time I asked her, not while we were recording, was way cuter because there was no teleprompting involved, but she answered with a loud punk-rock-sounding, “TWO!” when I asked her how old she was going to turn. She put two fingers up and was yelling so hard that her little hands were shaking. It was hilarious.

So I told Sara about that and had Rachel tell her how old she was going to be in July.

“How old are you going to be in July?” I asked.

Sam cocked his head. The light bulb that had turned on above him was almost palpable. He had had an idea.

His birthday is also in July. He’s going to be three. I don’t remember exactly what he said, but it was something along the lines of the Brian Regan baseball scene…

Sam stood there in shock for a moment, processing his idea.

We all started laughing and Sara put her hand back in the bag.

“Mommy, are you getting me three cookies?” Sam asked innocently.

Later, after the Lewis kids had gone to bed, we were still sitting around chatting. Rachel was up, but that’s because she doesn’t have a bed to go to at the Lewis house. We were talking about…something…and Rachel didn’t agree.

“No not!” she said firmly. (No not is a phrase she picked up straight from Sam), “No not!”

Back from the depths of the dark hallway we heard Sam’s little voice answer the opposing response,

“No not!” Rachel insisted, indignant that she was being challenged, especially with the official response.

They continued on like this until some grownup or another reminded him that he had been sent to bed.

It’s been fun to have such a nice little buddy around for Rachel—although “little” might be a bit of a stretch. He’s not really all that little at all considering he’s barely a year older than Rachel. He is, frankly, huge.

As good friends as they are, they were prone to fighting a little bit. It was not uncommon for either one of them to run out in tears tattling on the other for doing something mean. For the most part, though, Sam’s pretty gentle. This is a very good thing considering his size.

At first this concerned Jacob and when his parents called to check up on things while we were babysitting back in December, he said,

“Well, Sam’s being a little bit of a wimp with Rachel. He just lets her beat him up.”

Now, I don’t think it’s a good thing for anyone to be beating up anyone and we’re working on the no hitting / pushing / biting / scratching thing as much as the next parents. However, if anyone is going to be doing those things, it’s probably better that Rachel is doing them to Sam than if he is doing them to her.

He’s really surprised himself the few times he’s exerted physical strength against her.

Once he pushed her off the coffee table where they had been sitting, sharing snacks, and pretending to play the Wii, and she just flew off, still in sitting position. She landed a couple of feet away, on her bum, and started wailing.

I sent Sam to timeout to think about what he had done while I collected the sobbing heap that used to be Rachel. When he got out of time out he said, “I’m sorry Rachel.”

“That’s right. We don’t push our friends, especially off tables.”

“Yeah, no pushing off tables,” he repeated.

Sometimes the rules that are formed come from the most interesting scenarios. (For example, we have a “No Yoga at the Dinner Table” rule. That’s not really a related story…but it is an example of a strange rule and I’m sure you can imagine how it came about.)

Another time Rachel came up and pushed Sam. He kind of moved his torso to one side, but didn’t lose his balance or anything. He’s easily twice Rachel’s side.

“No pushing, Rachel!” he said, shoving her away with one hand.

That casual, self-defending shove sent Rachel sprawling across the floor like human tumble weed. She rolled several times before she stopped, halfway across the room. Sam just stood there, staring at his hand, probably wondering what happened and where Rachel went.

For the most part, though, they got along well. It will be fun to see the Lewises again once we get back to Utah. Hopefully Rachel will still remember Sam (I need to get their Skype ID) because they are just so cute together and made up quite the pair.

She still sometimes sings Sam all the way to church, hoping that she’ll go up to the nursery room and find him there, and she often asks to go to Sam’s house.

Alas, poor Rachel. Her heart has been whisked away to “Mrita,” a stow-away in Sam’s carry-on luggage.