Andrew’s cell phone sat on top of my dresser all day today; he forgot to grab it when he left for school this morning. That’s not a tragedy, really, except that my uterus is a ticking time bomb.

I didn’t even notice he had forgotten his cell phone, but he did. It serves as his clock on campus where they are apparently morally opposed to clocks—Andrew says there are no clocks in any classrooms and no clocks in the library—and more recently he feels it is important to have it on hand in case he should get “the call” from me.

He wasn’t too stressed about it, though, because he knows I usually IM him if I have anything to say, important or otherwise. I used IM to tell him that I was in labour with Rachel. He was at work and so was I but we rationalized that we could chat to each other because, you know, I was in labour.

me: K—I'm really thinking this is for real.
Andrew: Why?
me: They just keep coming. I guess about every 10 minutes. Andrew: Time them?
me: And they hurt. Yeah, yeah, yeah. After lunch if they're still there.
Andrew: This is exciting!
me: Maybe I'll just text you every time one comes... And then we can look in the history of the chat and see the times.
Andrew: Yeah, type something consistent so we can search for it easier.
me: Like what?
Andrew: Like asdfasdf. Maybe.
me: Start...Finish? Maybe. Anyway, I have to go meet Lindsay. We're walking down [to Brick Oven] together. Contractions kept going while I was walking [to the key office out in the middle of nowhere], but it really does feel better than when I'm sitting stark upright in a chair. I love you!

me: I got Hawaiian pizza and I have some left over. It is in a locker downstairs...but I will bring it up to you sometime. I'm helping with interviews at 3:00.
Andrew: Even David's? How's the contraction thing going?
me: Yes, even David's. Good. They kept going through lunch. And the way up to campus. And I just had one a few minutes ago. So, we'll see when the next one comes.
Andrew: Cool. Are they getting rhythmic?

me: I don't know. I just had one. But I wasn't at my computer. I was walking in the stacks. I'm so glad that I'm almost done here. I really, really want a nap.

me: These contractions hurt like all low down, not up at the top like they used to. I haven't had another one yet.
Andrew: It hasn't even been 5 minutes. It'll come.
me: I just had one. Honey. I think I need to go home. I just feel sick to my stomach and they hurt really bad. Like my period. I'm all queasy and feel weak. But then it gets over. And I feel better. I'll feel really silly if this isn't the real thing, but I really don't feel good.

me: Starting. Honey, I can't do this here!
Andrew: I can take you home.
me: Yeah? I'm fine in between. It's just that I can't fake that they aren't happening when they are happening.
Andrew: Do you want to come up here then? And we'll head out?
me: Yes, I think so.

Andrew: Ok, I got permission to go.
me: Alright.
Andrew: Come meet me in the lab and we'll head out.
me: I'll be up in a few minutes.

Phew! I’m glad I looked that up because after reading it, I, for one, feel much more confident about my labour-recognition skills. Maybe I really did know I was in labour with Rachel—just in denial about it at the same time.

I’m so glad that I was walking around campus all day, that I went out to lunch with my coworkers at Brick Oven, that I finished shelving, and that I was planning on sticking it out to interview for my replacement. What good work ethic I have! I’ll bet everyone at work is equally glad that I left early or Rachel would have been born in Special Collections and I’m not sure how all those rare book lovers would have handled my water breaking all over their books…

The good ol’ internet wouldn’t have helped us today, though, since it seemed to be out campus-wide. Poor Andrew was stressing out about not being able to contact me in any way, shape or form.

He didn’t get home until 8:00 PM and when he opened the door he found an empty house. Lights were on, but Rachel and I were no where to be seen. He even checked the bedrooms because he figured it was close enough to bedtime that we might have both turned in for the night. But we weren’t in bed. He was starting to panic—maybe I was at the hospital and he had no way of knowing where Rachel was or who took me to the hospital or if I made it to the hospital or if I was even in labour.

And then he heard Rachel’s voice and he relaxed a little.

We were only in the deep, dark, dank depths of our kitchen making dinner. Sadly, yes, we were making dinner at 8:00 PM and, yes, I think I would like my kitchen better if it actually seemed like it was part of our house instead of ten miles away from civilization.

Andrew learned his lesson, though—he can’t live without his phone when I’m this close to my due date; it’s far too stressful for him—I don’t think he’ll be forgetting his phone again anytime soon.

And since I’m on the topic of pregnancy (aren’t I always?) I thought I’d just brag about how small I (apparently) am.

We went to my friend Jenni’s son’s birthday party last week, which was a blast. We met a lot of new people and Rachel had fun chasing some new little friends around and trying out the trampoline. She was really nervous about it and August was, too. He suggested for his next birthday they rent two trampolines so that the big kids and little kids could jump at the same time without hurting each other. He’s one of the most considerate eight-year-olds I know.

Anyway, I found myself at a table surrounded by Canadians. Funny how these things work. We were just chatting and it came out that the couple across from me were from Canada—Calgary, actually—and Shaheen blurted out that her husband is Canadian, too. I added that I, too, was from Canada. So Shaheen and Andrew ended up being the only Americans at our table, except that I’m dual. I never know where to count myself.

Shaheen has a two-year-old boy named Adam. Rachel was playing with him and being quite bossy, but Shaheen said it was alright because he likes strong women. He has an older sister and is used to being bossed, I guess.

Later in the evening, Jenni called us all to assemble for cake. That was the first time I stood up all evening because I just kept sending Andrew to go do everything for me. I stood and held Rachel over my huge bump while we sang, and then I sat down with Rachel because I can’t hold her standing up for very long.

Andrew got a piece of cake for me and when they called for seconds I handed him my plate and said, “Will you get me another piece?”

“What—are you pregnant or something?” he asked.

I hadn’t realized that she hadn’t noticed the bump.

“I actually really am pregnant. I’m due in about three weeks,” I told her (only 2 now).

And then when we were getting ready to go, we were saying thank you and goodbye to August and Jenni. William, Jenni’s six-year-old, came up to me, pointed to my stomach and said, with bulging eyes, “Are you going to have another baby?!”

But I didn’t mind that he noticed that I was pregnant because, well, I am. Hugely so. And most often I think he sees me in a bathing suit—which I have to yank and twist to get on since I don’t have a maternity suit—and if anything being in a bathing suit makes a pregnancy more obvious.

(Side note: Poor Rachel wanted to go swimming so badly today but I told her we couldn’t go because I just don’t feel like trying to squish into my bathing suit again. Soon I won’t have to. Soon, soon, soon.)

We took some pictures of my belly tonight—38 weeks—to prove that it really does exist. 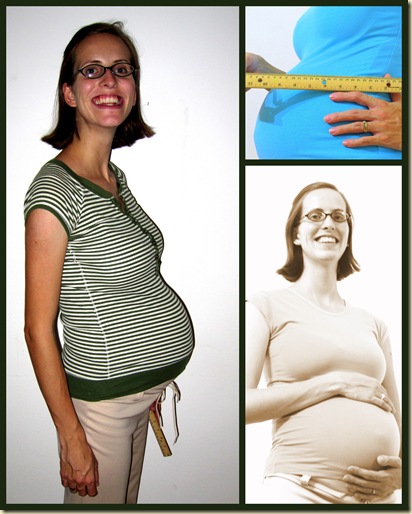