Yesterday when we brought Miriam home it was raining. Her first day out in Cairo and it rained! I was totally expecting sunshine but I suppose it has to rain sometime or other—it was only sprinkling by regular standards, but it was raining by Cairene standards.

Rachel was thrilled to have baby Miriam at home. She spent the whole afternoon trying to interact with her. She waves in her face and says,

Rachel cried whenever it wasn’t her turn to hold Miriam, not wanting to let Grandma ever have a chance at cuddling and getting upset when it was time for me to feed Miriam. She loves to hold her.

“Once on a time there was mommy bunny. One time was baby bunnies. One time they lived in a house. The end!”

She explained what she saw in the pictures and reworded the parts she had memorized and explained every lag in the story due to page turns.

She asked Miriam questions about the pictures.

Rachel sang her some songs.

“Lullaby! I loves you! Lullaby! Jesus wants me sunbeam! I’m trying to be like Jesus! Lullaby!”

She pats her and hugs her and pokes and prods her and, for the most part, baby Miriam ignores her and sleeps on.

I think Rachel will be very happy when Miriam is more interactive. I’m amazed at Miriam’s good temperament—even her most worked-up state is pretty calm—and I am happy that she sleeps so much. I didn’t think that babies like this actually existed after I had Rachel and when my friends would say things like “my baby sleeps for 20 hours a day” I would look at them like “that’s not possible.”

Miriam is also a champion breast feeder so far. It took about ten minutes to get her to latch on the first time and she’s been great ever since. I’m a little sore, but nothing like when I was trying to nurse Rachel. It’s amazing what 18 months of practice can do!

When Dr. Omar was giving Miriam her discharge examination he mentioned that he was sure I was already a expert breast feeder, and while I’m not sure I would go that far I would certainly say that this time around we’re doing great! Dr. Omar gave me a breast feeding lecture in spite of our “expert” status.

“Now, I already know you have an excellent diet,” he said.

Andrew and I stared at him. How did he know the first thing about my eating habits? He noticed our puzzled expressions.

“Well, you’re Mormons!” he explained, “No coffee, no tea, no alcohol, no smoking…but I don’t have to tell you that!”

So that’s what he meant by our excellent diet.

And we really will be eating well for the next little while. Not only is Karen here, waiting on us hand and foot, but the Relief Society sisters have arranged to have meals brought to us for a full week!

Unfortunately there aren’t many pictures of Miriam’s first day home. Miriam, and I were so exhausted that we spent the whole day sleeping while Andrew went out to find replacement cords so that we could have internet again.

But here’s one from when Rachel decided Miriam was bored and needed some toys to play with: 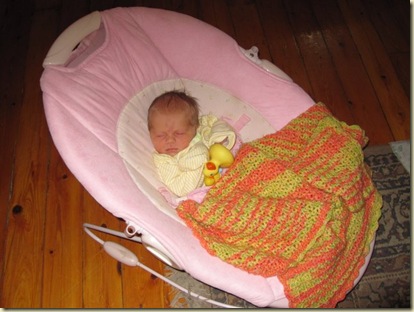