We’ve reached that glorious stage in life where we show up to a branch function and Rachel runs off to play. By herself.

It leaves us free to chat with other grown-ups, which is really nice for me since I’ve been in primary for the past…well, since before we got married. Not that I mind being in primary, but sometimes it’s nice to remember that there are people in this world who are older than six years old.

It also leaves us free to actually be useful. Andrew was excited to nerd-out in the chapel and spent quite a while setting up and playing with the translation-radio thing. He wouldn’t let me take a picture of him wearing a headset, which is too bad because I don’t think I can accurately describe how happy he looked. It was exciting to have simultaneous translation for the Egyptian members—this is the first conference we’ve been able to do that here.

So while we listened to strains of Ring-Around-the-Rosy drifting in from outside, Andrew set up this: 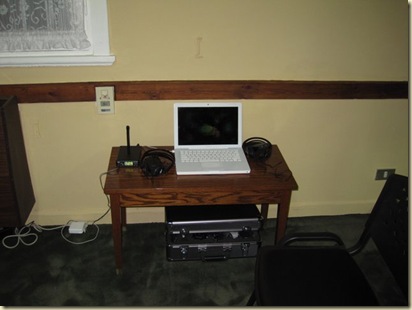 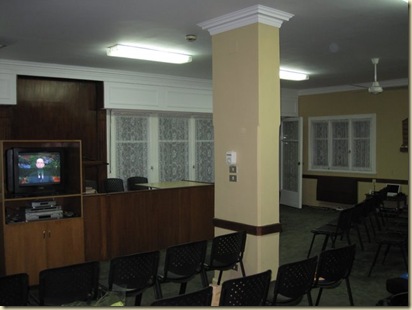 When we got back outside, Ring-Around-the-Rosy had dissolved into a game of what Rachel calls “Chase-Me-Seek-and-Hide” between Rachel and Kathleen.

Sometimes when one of the girls would lose the other one they’d wonder aloud where the other one went until the other realizes they are no longer being chased. Then they go find the chaser and say, “Here I am!”

It was quite comical to watch.

The game dissolved into another game involving some older kids and I lost track of where Rachel was for a while. Then Elisabeth came up to me and said,

“Sister Heiss…Rachel’s not crying or anything, but I think she might be hurt.”

“Oh, really?” I asked, scanning the yard to locate Rachel.

Sure enough, blood was trailing down Rachel’s leg, from her knee to her shin. She wasn’t bothered by it at all. I enlisted Andrew to help me wash her off, though she was fine with that process, too, and after the blood was all washed off an inch-and-a-half gash was revealed. It was superficial enough that I wasn’t worried about needing stitches, but it was still bleeding and definitely needed a Band-Aid. That’s what I needed help with.

I held her while Andrew produced a Little Mermaid Band-Aid from his wallet and attempted to bandage our child. She started screaming and thrashing and ripped the Band-Aid off seconds after it touched her skin, casting it aside as a bloody, crumpled lump.

I picked her up and walked into the foyer where I could sit in a chair and basically hog-tie her while Andrew secured a Band-Aid to her knee. She bawled. And lost the ability to walk. 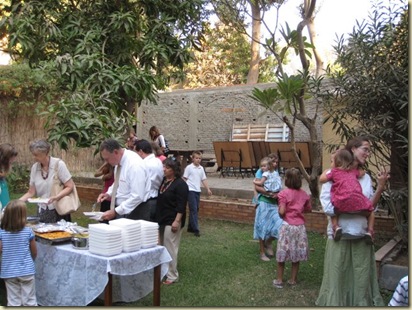 The food had been blessed by the time we got back outside, so I held Rachel while Andrew went through the line. We had a party because our humanitarian missionary couple, the Lindsays, have finished their time here and are heading back to the States. They’ve been replaced by the Burtons, who seem great so far. 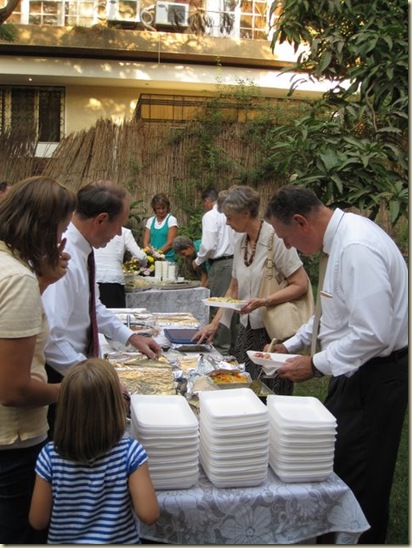 I sent Andrew off to get some food for our family while I cuddled our weeping daughter. The food was fantastic but I don’t think any of the children ate much of anything. They sat at tables in front of food for a while and then were off and running, occasionally making stops at the dessert table before dashing off again. (They even polished off the last of my burnt cookies, the little angels).

Even Rachel didn’t last long in her pouting state. Soon she asked me for a cookie and then asked if she could find Kathleen and the other kids. I told her she could so she hopped off my lap and then crumpled to a heap in the ground, sobbing once more.

I pulled her up onto my lap and she picked off her Band-Aid and handed it to me (thanks, Rachel). Only then could she stand on her own two legs again. That Band-Aid was zapping all her power, I guess, but at least it had served its purpose (or part of its purpose) and the bleeding had pretty much stopped.

Embarrassingly enough, I was the last person eating. Ashley and I, who are both pregnant (she’s due 6 weeks after me), were sitting at the same table, chatting and eating while everyone else in the branch was folding up tables and chairs. She finished eating before me…and I still hadn’t even eaten dessert. I sat outside with Rachel, eating a cookie that Andrew had saved for me (probably bouncing several children in the process) while the short program for the Lindsays started.

After they were presented with the infamous “Vials of Egypt,” we sang them “A Few of My Favorite (Egyptian) Things,” which was basically hilarious. I’m not sure who wrote it (Phyllis?), but it definitely had us all smiling.

Raindrops on Jasmine and tall minarets.
Bright copper bean pots, oriental carpets
Packages from Road 9, tied up with twine
These are the things that are favorites of mine.

Ramadan lanterns, Arabian horses,
Stuffed grape leaves, shwarma, our favorite main courses,
Fruit bats that fly with the moon on their wings.
These are a few of our favorite things.

Chorus:
When the mosquito bites,
When the garbage stinks,
When I’m feeling sad,
I simply remember my favorite things,
And then I don’t feel so bad.

Sand-covered camels, the three pyramids,
Trips to Fayoum to see mummies with Griggs,
Watching the sunset while floating the Nile
These are the things that we think are worthwhile.

Fish in bright coral, snorkeling at Sharm,
Diving with dolphins is part of the charm,
Baptisms in the Red Sea, Mt. Sinai at dawn
These are the things that we’ll miss when we’re gone.

Temples at Luxor, in Giza the Sphinx
Getting away from pollution that stinks,
The Petrified Forest, the Valley of Kings,
These are a few of my favorite things.

Bright colored donkey carts, quaint village scenes,
Baladi bread and red poinsettia trees
Coming to church with Hussein at the gate,
These are the things that we think are just great.

Then we all settled in to watch conference. Rachel was so excited to be watching a movie at church. In the beginning when it shows scenes from Temple Square she almost jumped out of her seat.

She was also excited to see President Monson and some other people she recognized. Then she announced she had to use the potty so we ran upstairs to use the washroom before conference really started. When we were in there, she told me how I used to put her on that table to change her diaper when she was little. How she remembers that, I don’t know. She hasn’t worn a diaper in forever.

On our way back downstairs we ran into one of the Cummings boys on the stairs.

“Who is that boy?” Rachel asked.

Then Rachel and I continued downstairs and he continued upstairs. We had made it down about three stairs when he called out to us.

“Wait, Sister Heiss! I’m Conrad, not Calvin!” he corrected himself, then added sheepishly, “Sometimes even I get confused!”

The funny thing is that Calvin has brown hair while Conrad is blonde. They look like brothers, that’s for sure, but they are definitely not twins. In fact they’re two years apart. I think it’s because their names start with the same letter…

Conference was wonderful. It was nice to be sitting with so many branch members—we all crowded onto one side of the chapel so that we could see the TV screen and it was quite squishy. That’s the first time I’ve watched conference with other people in a long time! In Utah we usually just watch at home.

Once I went to Temple Square, before Andrew and I were married, but before that the last time I watched conference anywhere other than at home was when I was living in Russia.

We brought a ton of things for Rachel to do since it was two hours of grown-ups speaking and so close to bedtime, too. We try not to bring too many distracting things during sacrament meeting since we want her to learn that mostly she just has to sit still and be reverent, but conference is different. Especially when you’re watching so close to bedtime, which is meltdown time.

She entertained herself fairly well and we were able to pay attention. It was wonderful.

We took her home when it was finished, put her to bed, and got a few things done before watching the second session online. We didn’t pay as much attention to this session as we did when we were trying to keep Rachel happy and quiet. I think because it was so close to our bedtime—the second session is from 10 PM until midnight here.