Rachel was in a bit of an exploratory mood today and I really wasn’t so instead we did crafts and played school. She got to learn about the world around her and go exploring in that sense and I didn’t have to change out of my nightgown all day long.

In the morning and early afternoon we worked long and hard to put together a Thanksgiving* turkey.** First we painted feathers on paper and then let our paintings dry while we had lunch. Then we cut up the feathers and wrote down the things we were thankful for. Rachel was so funny when she was coming up with her contributions.

“What are you thankful for?” I asked.

“Ummm…Mommy and Daddy!” she said.

“Okay, what else are you thankful for?”

“The food,” she piped up, quickly falling back on a rote prayer answer.

“All of our blessings.”

Again, with the vain repetitions! “Right, like such as…what? What are some of our blessings?”

“Oh, just everything Heavenly Father makes for me.”

Hello, Generic Girl. “Okay, like what? What has Heavenly Father made for you?”

“Like the sun and the trees and birds and dogs…”

Once I got her stream of consciousness flowing she gave me a mighty fine list of what she was thankful for. I threw in some of my answers as well. 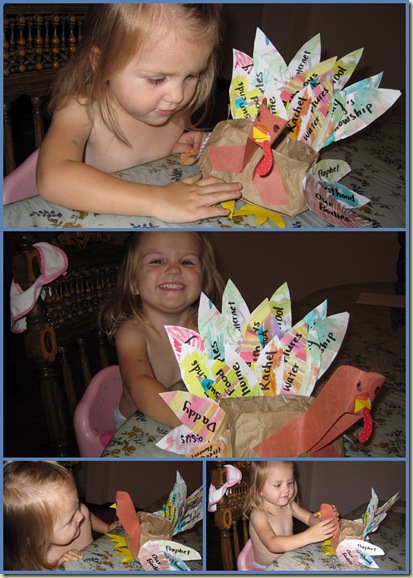 While we were making the turkey she kept holding various papers up to her face to pretend that she had her own wattle. She’s pretty obsessed with it and calls it a gobbler, which is technically the name for a male turkey not the name for the red hangy-downy part. But that’s okay.

I didn’t tell her that turkeys don’t really think flying is very cool.

Later on in the day we talked about what the letter T says and what words start with the letter T. I told her “T-t-turkey,” and she came up with triangle and turtle. We drew pictures of those things, traced some Ts with our fingers and then practiced tracing Ts with crayons. 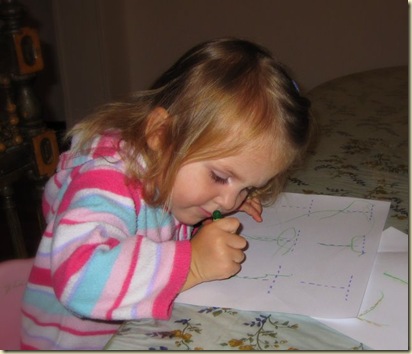 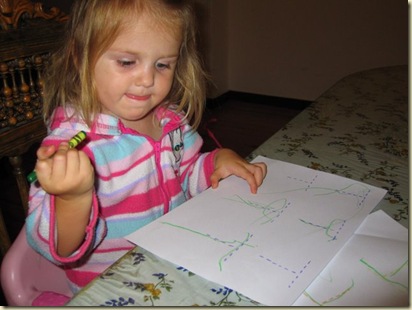 “Straight down…and straight across…” she chanted while she wrote.

She did pretty okay, I think, but her lines certainly didn’t always go straight down or straight across. She’s always pretending to write things, bringing me a bunch of scribbles and asking, “What does this say?” or “What did I write?” I figure it might help if she actually knows how to write a few letters besides I and O, which essentially are just a line and a circle.

We also did some letter C exercises since she invented some random crocodile game today, involving every single ball in the house, several invisible crocodiles, and a whole lot of yelling, running and screaming on Rachel’s part. She kept trying to get me to play the game with her but the problem was that only she could see the invisible crocodiles, which we had to either jump over or throw balls to (because they eat the balls). I ended up getting eaten a lot. And if I ever thought I did see a crocodile, Rachel informed me that I was mistaken and there were no crocodiles about.

Eventually I gave up playing and went into the kitchen to make cookies. Rachel didn’t even bother me until it was time to mix in the raisins, which is miraculous because the child loves to help stir. She was too busy fending off the crocodiles to help much, I guess.

While the cookies were in the oven she continued to obsess about crocodiles, so we made pet crocodiles for ourselves. Rachel was thrilled. Her crocodile has shoes, a ponytail, a ribbon and sharp teeth. The only part she asked me to draw were the sharp teeth. 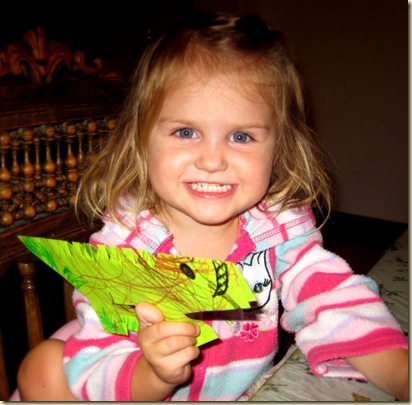 For our letter C page, we drew a crocodile and she coloured it blue.

She insists that it’s our winter now and is always pulling out sweaters and things to wear. I’ll admit it’s getting cooler, but it’s still reaching into the high 20s, low 30s in Celsius (high 80s, low 90s in Fahrenheit) and doesn’t ever drop below room temperature, even in the middle of the night. But I guess that is what she remembers winter being. If only she knew…

The other C words she came up with were cookie, caterpillar, and cat. She had a hard time tracing her Cs because she kept wanting to close up the circle, so most of her Cs turned into Os. I think that’s fine because she’s only two. We’re not really all that serious about learning how to write yet.