When Andrew was learning how to drive, his dad would constantly lecture him about watching for things straying onto his path (kids, balls, deer) and how he should react to that.

One day when they were out doing driving together, Reid started giving Andrew the same lecture he’d heard several times before. And then, in the middle of the lecture, Reid yelled,

Andrew slammed on the breaks and momentarily freaked out.

I’m pretty sure that when Reid tells the story Andrew asks why he yelled that and Reid answers him with, “Because…you’re being stalked.”

Anyway, with that hilarious introduction, I thought I’d give an update on my telephone stalker, who has since earned the nickname Mohammed al Pervert.

He called several times between September 27th and September 30th, averaging around 20 calls per day. We tried not to answer the phone but he would randomly use other phone numbers, which we would pick up since I don’t have the whole branch list in my phone. I had added five numbers to my screen list and we thought we had effectively cut off his communication routes when we didn’t hear his voice for a full 24 hours. I still got missed phone calls but I didn’t have to worry about accidentally picking up the phone with Mohammed on the other end.

But then late in the evening on September 30th my phone rang again. It was a new number so I gave it to Andrew to answer. And good thing—it was Mohammed again.

Andrew chewed him up one side in English and down the other in Arabic. Mohammed was relentless.

“Give me your wife for one night only,” he begged Andrew, breathing heavily.

That was the last straw for Andrew. I’ve never seen him so mad in my whole life. He just doesn’t get angry about things.

He yelled some final warnings to Mohammed and then hung up my phone and ripped out the battery pack.

“I’m going to the police station in the morning,” he growled.

After waiting in line for hours, he was finally ushered up to the front of the line by some head-of-police dude and, against all odds, successfully filed a محضر تحقيق against Mohammed the pervert. 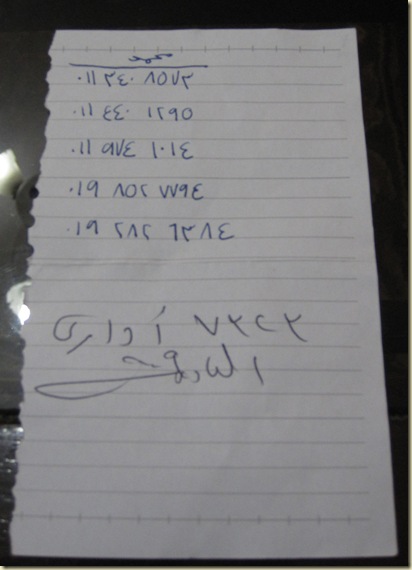 He had to tell several different police officers his tale before one agreed to take the case. Each time he told it he condensed it more and more, so when he got to the last guy he had it down to about 10 sentences. The officer wrote a page and a half of notes and jotted down each phone number that Mohammed had used to contact us.

We have no idea what that report says or what happened with our case, but Andrew was given a case number so that we can follow up on it if we want to.

My phone has been turned off since September 30th. I finally turned it back on this Sunday, October 4th. So, it’s been on for four days and we haven’t heard a word (or a *pant*) from Mohammed. That means he either gave up or he’s in prison somewhere.

The latter would be rather unfortunate for him because sometimes small crimes get punished rather severely. At the same time, it’s never okay to sexually harass anyone and there’s a big problem with sexual harassment here in Egypt. If I didn’t report him I would have been sending yet another pervert the message that it’s okay to treat women poorly. And it’s not okay so I felt uncomfortable being passive about it.

It’s weird to think that he was only bothering us for a week because it seemed like a lot longer than that. I think when you’re stressed and scared time runs a little slower. I’m just grateful that this stressor seems to have disappeared; I’m breathing easier, sleeping better, and I don’t jump every time the phone rings.

Oh, and I asked Mirza for her real cell phone number and checked that one against the one I had on my visiting teaching slip. It’s off by one digit. One digit! And not even in the actual number, but in the prefix.

Who’d have thought that one little number could cause so much grief? What are the chances that one digit would lead me to a creep instead of ringing up one of the millions of normal people living in this city?

I don’t know that we’ll ever know what became of Mohammed. I’m not sure that I care to know. For now I’m just happy that this experience is over.

I think this calls for some celebratory corn. Without the stalk.