A few nights ago we went to a farewell dinner for some friends who will be moving to Rwanda in a few weeks. Sister Knapp ordered Thai food, which I was excited about. Andrew wasn’t quite as excited about it because in Thailand people eat vegetables. I thought dinner was superb and it was fun to visit with some of the branch members.

Rachel was running around playing with her friends and having a great time. Then she ran over to me, said something, and started vomiting. She was on the couch so I lifted her off the couch while she was spouting out vomit and put her on the floor where she continued to vomit. It just kept coming and coming. Her dress and socks were soaked, as was the couch cushion she had been on.

I peeled off her dress and socks and then she darted off again.

What? You can’t be serious? You just threw up so much! Sooo much!

We mopped up the floor and couch the best we could and hosed Rachel off in the Knapp’s bathtub. And then we skedaddled.

Miriam was actually the one sick that night. She spiked a fever of 102.7 that evening. Rachel acted perfectly fine. Miriam woke up fitfully all night long, every half hour or so. It was awful.

She did it again last night, too, and this morning she woke up with a lovely rash all over her head. I tried not to worry too much, but my friend’s baby, Noah, was just diagnosed with scarlet fever, and the blotchy red marks looked like either roseola or measles. And since measles starts on the head and migrates down and roseola typically starts on the trunk and migrates up, I kept getting more worried. So I made a doctor’s appointment.

While we were waiting for our appointment, Rachel was telling us about butterflies. I had given her a butterfly sticker earlier today and she asked me, “Why do butterflies have horns?”

“What? Oh, those aren’t horns. Those are antennae.”

“They’re kind of like ears and noses and fingers all combined…butterflies use them to explore the world…they’re sensory organs…like, ummmm…”

“So they are for hearing?”

“Yes. For hearing. And other things. But, yes, for hearing.”

So she had to tell Daddy about that at the doctor’s office. I’m spoiled, I know, but Andrew has finished all his course work and his thesis so I had him take the girls and I met up with them after I had finished working. They were still waiting even though I was technically twenty minutes “late.”

“Butterflies have horns that are like fingers and ears.”

“Oh?” Andrew looked at me for translation.

“Antennae,” I whispered, wiggling my index fingers above my head.

“And what are ears for?” Andrew quizzed her.

“Right! And what are noses for?”

Okay, stopping there. We need to work on our senses, apparently, because that is not the only purpose our noses serve! Although if you tried to tell me that when I was two…or three…or four…or five…or six…or more…I probably wouldn’t have believed you.

We walked into Dr. Omar’s office when Miriam’s name was called and went through all the niceties.

“And how is Miss Miriam?” he asked.

“Oh, I thought you were here for her seven month check up.”

That was just a coincidence. I told him about her fever and how she woke up with a rash.

“That’s easy!” he said, “I can tell from here. It’s roseola infantum!”

I added in the part about Noah and his scarlet fever and that the rash didn’t appear to be anywhere else on her body except her face.

He checked her out all over, weighed and measured her, and even used a tongue depressor, which she hated. He’s still sure it’s roseola infantum and since my friend Jenni’s boy has that, too, I’m going to agree with his diagnosis. 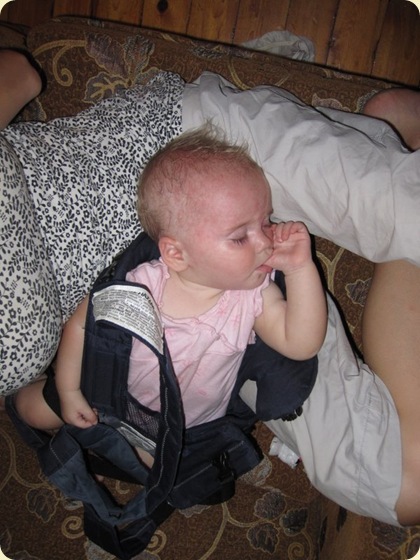