This morning when I got up once I was greeted by a sickly, eerie orange glow streaming through our bedroom window instead of what I might normally expect at…excuse me while I fumble around to find the cell phone, which, yes, is in bed with us…six o’clock in the morning.

Sometimes people are shocked with how long I can “sleep in.” But seriously, folks, specifically those who have accused me of leisurely sleep-ins, mothers don’t have sleep schedules (at least, this one doesn’t, at least, not lately) and, therefore, cannot technically sleep in.

I got up at six, fed Miriam, and then went out onto the balcony to take pictures of the festering sandstorm. 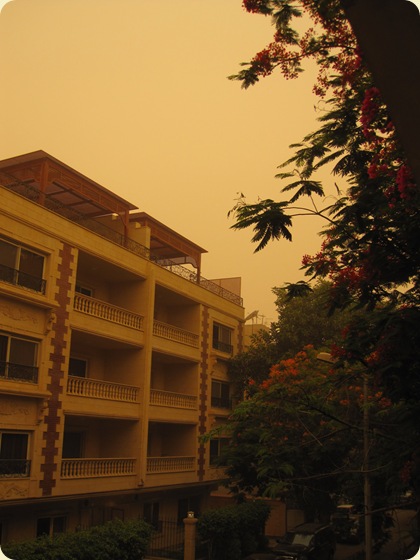 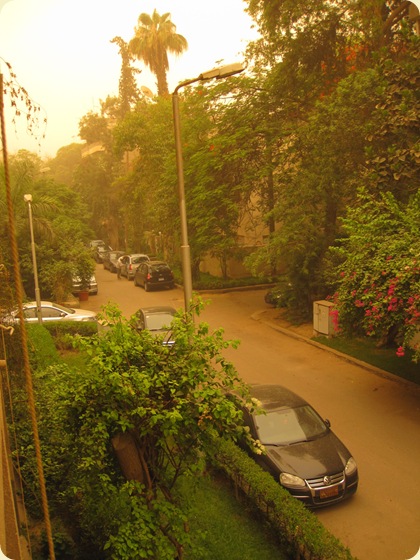 It was quite hazy and nasty outside but I was happy that it was six in the morning and it was the first time Miriam had woken up since midnight. I had been quite uncomfortably awakened several times in the night due to being extremely engorged. I believe in nursing my children to health—literally—so that means that I was up nursing a nearly inconsolable baby every half hour or so since Saturday last week. But last night Miriam slept for six hours straight, which was awesome, except that I was still manufacturing milk on hyper drive.

After taking pictures I went back to bed until eight or so, when I got up, for real, leaving my sleeping family behind so that I could go to yoga…in the pouring sand.