If you were to ask me a week ago whether or not I was planning on having Rachel attend preschool I would have told you no because, truthfully, we weren’t planning on it. But sometimes things just fall into place—one little phone call did this for us and now Rachel’s enrolled in a preschool.

She’s going part-time, two days a week. Today was her first day and she was so excited that she accidentally woke up at 6:30. I had her go back to bed in our bed and when I tried to wake her up at 7:45 she moaned and begged, “Please let me sleep! I just need a little more sleep.”

I made her get up anyway and we got all ready to go. I had to dig around to find her princess shirt (it was in the dryer, which had (luckily) just finished) and her pink pants (I don’t even remember where those were—not in her drawer). We decided on breakfast cereal while I was doing her hair. She told me she wanted chicken cereal but I thought she said chocolate cereal. This almost ruined the whole morning but Grandma offered to eat the chocolate cereal for her and I got her a new bowl of corn flakes for Rachel. Crisis averted. 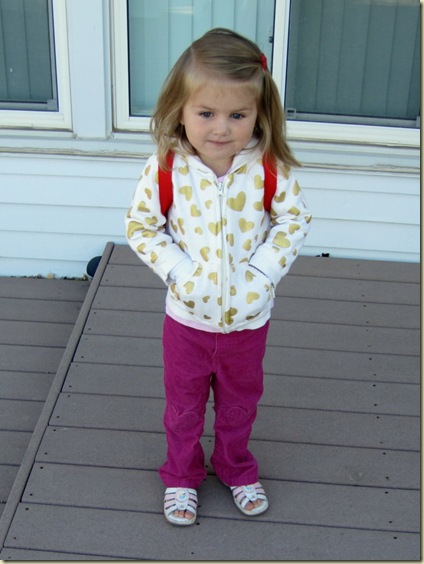 She was greeted by the door by the “school’s ambassador” who showed her where to hang her backpack before taking her upstairs to explore the classroom. It’s actually pretty awesome.

The downstairs is painted a lovely lavender sky and has a sandbox and a music room and a little library (besides the art and science classrooms). The upstairs is painted with stars, galaxies, and planets and that’s where they do yoga, meditation, and…other stuff. I don’t know. I didn’t stay the whole day. I left after fifteen minutes because I figured Rachel would do better without me.

And she did great! And we had a great time without her (no offense, Rachel)—I put Miriam down for a nap and worked the whole time she was gone.

When I picked her up she was absolutely beaming. She rushed over to me waving her new purple folder and showed me the projects that she had done today. They learned about stars—they made a picture with blue, yellow, and white stars and she told me that blue stars are cool, yellow stars are hot, and white stars are dying. She told me that the sun is a star but it’s so bright that it makes it so we can’t see the other stars in the sky when we can se the sun. They put a star on a popsicle stick and used it as a prop for singing “Twinkle, Twinkle Little Star,” waving it “so high.” She showed me that she had learned how to skip and told me that they had snacks but no one passed the pears so she only had apples and that a boy hit her and she told him, “No hitting!” Her teacher was impressed at how well she can trace her letters—today they focused on the letter S.

She had a blast. She seriously couldn’t stop talking about it—preschool had her monologuing all through lunch.

After lunch she had a doctor appointment. She hates going to the doctor. It was a bad appointment. She would hardly let the doctor touch her and was flinching and twisting away from him the whole time. I had to explain everything to her before she would cooperate, which probably made me sound pretty stupid to the doctor because, well, I’m not a doctor.

“Rachel, he just needs to see if all your organs are in the right place. Like what if you were missing your stomach. He needs to know your stomach is still there.”

“Yup. It’s still there. Now I’m going to feel your back. Can you stand up straight for me.”

Rachel buried her face in my lap and wailed which definitely wasn’t standing up straight.

“Come on, Rachel, he just needs to see if your spine is straight up and down. If there are any curves in your spine the doctor needs to know so we can fix them.”

“Straight as a stick. Now I’m going to listen to you breathe.”

Explain, explain, explain, explain. That’s all I did. Oddly enough she didn’t ask why once. She just whimpered and fussed about everything. That’s the wordless why, I guess. She said nothing the entire appointment, urging our doctor to ask me about her language development.

“How many words can she say?” he asked.

“Oh, I don’t know. She actually has a pretty big vocabulary.”

She uses words like familiar, gleam, commercial, wicked…I don’t know that I could possible quantify the number of words she knows.

“Does she string words together in sentences?”

“It’s very important that you tell me if she is behind in her communication skills. Is she just playing shy or is she always this inon-verbal?”

“She’s really quite the talker once you get her going.”

“Is she always this shy or is it just me?”

“It’s just you, actually—well, all doctors. She hates doctors.”

“I understand,” he said.

Then he sent in two nurses to administer the vaccines while I held Rachel over my lap. Three shots, poor girl. You could hear her screaming from the lobby. Luckily she’s old enough for treats at the doctor’s office and we got to visit the treasure chest and choose two treats (she was so miserable that our nurse said she could pick two instead of one). That made things a little better

Oddly enough, she was quite verbally aggressive with the nurses.

I should have asked them to let our doctor know that she definitely speaks. Though chances are, he probably heard her…