A day on the town

The girls and I spent the day on the town—Provo, that is, more specifically within a two-mile radius of BYU. 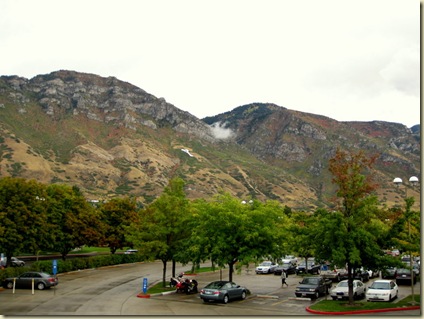 I made dentist appointments for the girls because Rachel’s never been to the dentist (and she’s three) and because Miriam fell in the tub and chipped her tooth. It was so sad. What’s even sadder is that I don’t even remember when it happened. All I know is that I was bathing my girls every single day last week—sometimes multiple times a day—because Rachel kept throwing up all over herself and Miriam just likes bathing. So they were both in the tub and Miriam had stood up and was bouncing up and down so I started spouting off the adage, “Miriam, sit down before you fall…*sigh*…down.”

It was too late. She fell over and smacked her face on the side of the tub. Bath time was immediately over for her. There was no consoling her while she stayed in the tub—this was the kind of accident that involved full-contact cuddles—so I quickly wrapped her in a towel and got her ready for bed with lots of cuddles along the way.

I didn’t notice her tooth until Monday night so I’m not really sure when the bathtub incident occurred or if it’s really how she chipped her tooth. It was the smack of all smacks, though, so I’m betting it was. I called to make dentist appointments yesterday morning and they had openings for Wednesday afternoon. Perfect.

That’s how we ended up going to the dentist today. Rachel was terrified and refused to cooperate so the dentist only did a visual examination of her mouth. She nearly bit his fingers off—I was restraining her torso and head while the attendant held her arms and the dentist pried her mouth open. He said her teeth look beautiful, encouraged her to continue brushing daily, and suggested we begin flossing since her teeth are a little close together for a child her age—the crowding comes from my side of the family, I am sure.

He said he wasn’t concerned about the chip—it was a clean break and is small enough that it doesn’t expose the inside of her tooth—but to watch for signs of discolouration in the tooth or for any discomfort on Miriam’s part.

Both girls were rewarded with stickers and toothbrushes. They played with them the whole time we were walking back to campus. We spent the rest of the afternoon waiting for Andrew to finish with classes and work so that we could go home. There’s lots to do on campus when you’re waiting. First we visited Naanii at her office in the library. Then we picked out some books to read in the children’s section. Then we read them. Then we visited Uncle David at his office in the library and saw the big globe.

By this time Rachel was getting antsy to go to the Bean Museum. I had promised her we could go but it was absolutely pouring outside and I didn’t want to make the trek in the rain. When the storm had abated a bit I finally relented and we got all suited up to go outside. We ran into Daddy in the lobby—he was just coming in the library to go to work as we were leaving.

We had a great time at the museum. Rachel was particularly interested in the display of horned mammals. She put her hands up by her head and said, “Look, Momma! I’m a sheep!” 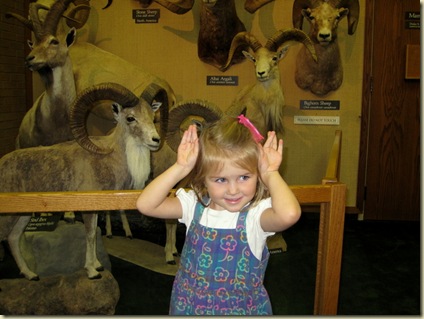 Then I told her to stand right in front of one of the ibexes to frame her face with its horns. She thought the picture was so funny when I showed it to her. 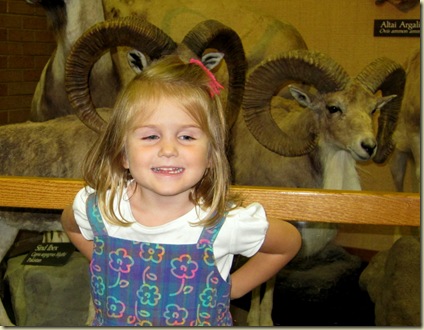 We marveled at the size of the giant eland. Only his head was on the wall but I’m pretty sure his head was as big as me. Our favourite animal of the day, though, was the saiga antelope. Rachel couldn’t stop laughing about his nose. 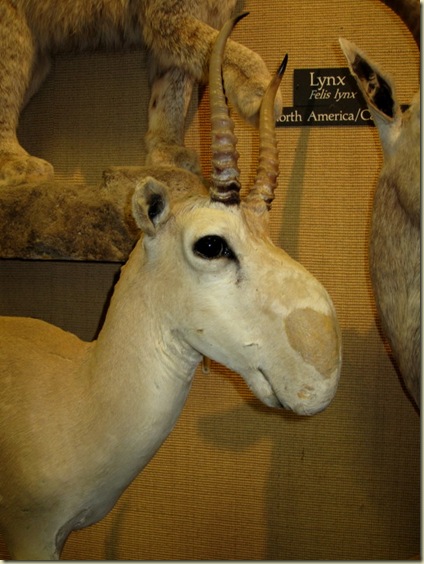 It’s purely functional: the long passage allows better filtration of dust particles from the summer air and more time to warm up the cold, winter air (according to Wikipedia). Since the species is found in select, and frigid, pockets of Russia, Mongolia, and Kazakhstan. I wonder if the snout on the saiga will ever evolve to be as long as an elephant trunk. Too bad it’s critically endangered. We may never have an answer to that question if the population keeps declining as it has been.

At one point I told Rachel, “If you have any questions, you can ask me.”

“Okay,” Rachel said, then she pointed to an animal asked, “When was this one born? Where is its mother? How did it die? Did it have babies before it died?”

I could have had a lot of fun answering those questions but I was pretty tired by this point in the day so instead I said, “I don’t know the answers to any of those questions. What I meant was if you want to know the name of the animal or where the animal lived or anything else general like what the animal eats you can ask me those questions, okay?”

“Can I ask one thing not general?” she asked innocently.

“Oh…sometimes they only want to keep the head. I don’t know why.”

We had a fun time together. 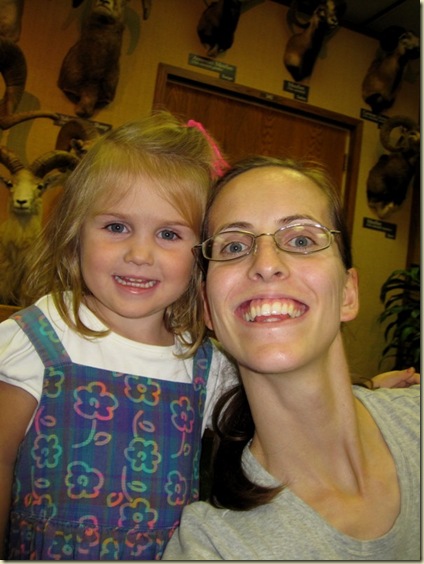 Miriam did, too, although she didn’t ask quite so many questions. 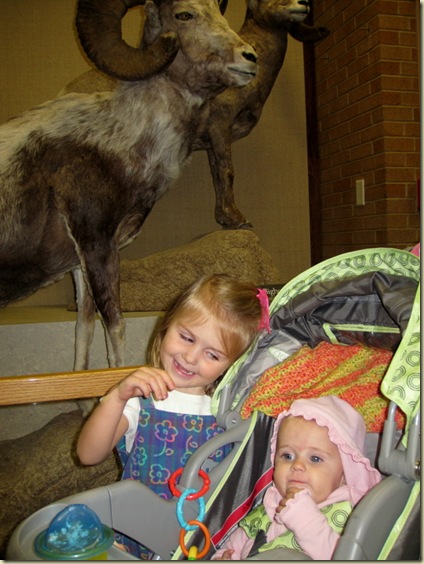 When we were finished going through the museum we went to pick Daddy up from work. It was a long, long day filled with lots of walking. Lucky for us, Grandpa Bruce had invited us over for dinner, which was his famous ginger beef stew. It warmed us right up! 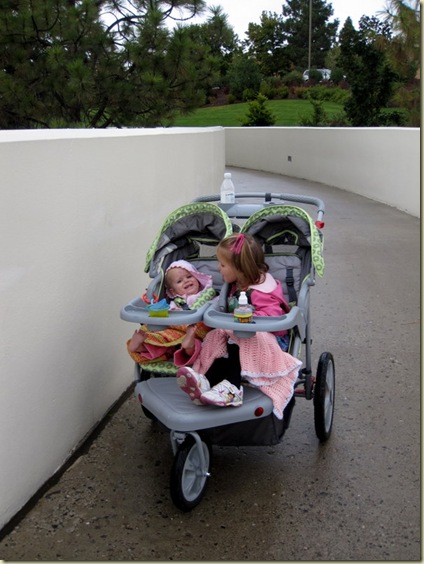 It was fun to be out of the house all day, but I’m sure glad we get to stay home tomorrow!