On All Hallow's Eve, eve, eve...that's October 29th, in case you lost track...Rachel had a party at school. We went to parent-teacher conferences the day before and her teacher was sure to stress that Rachel was invited to the party even though it was on a Friday, a day she normally doesn't go to school.

"I'll have to hurry and finish her costume tonight, then," I said.
"Oh, don't worry about rushing anything. We have a whole room full of costumes and she can just come and pick one out to wear for the day."
Upon hearing this, Rachel tugged off her sweater, looked up at her teacher, and said, "Can I see this costume room, please?"

Needless to say, she did not want to wear her chick costume to school. Instead she wanted to take her chances to see what treasures the room of costumes would hold. When she walked in the door she requested a princess costume. Luckily enough, they had a Snow White dress, so that is what Rachel was at her school party.
When she got home from school, I sat down to sew some more finicky feathers onto her costume. She started crying and carrying on about how she didn't want to be a chick, that she wanted to be Belle, and how I don't ever listen to everything she has to say and that her costume is ugly and that she hates it and she hates me and she hates Halloween. I don't remember exactly what she said after that because I sent her to her room to pout and carry on there. And I finished her costume, anyway. I'm not cool enough to come up with a whole nother costume when trick-or-treating is the very next day (we went a day early this year; it's pretty much a given that, in Utah, when Halloween falls on a Sunday, everyone goes trick-or-treating the day before; and I'm really okay with that).
Luckily, Rachel was as fickle as her feathers (sewing those onto her costume was a bear) and by the next day she was thrilled to dress up as a chick in order to experience this trick-or-treating thing that she'd heard so much about. The grand compromise was to wear a crown and a necklace with her chick costume--that way she was a princess chick. Or maybe she was a chic princess... 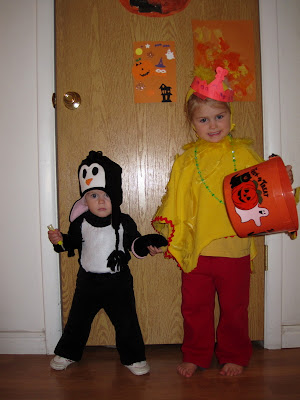 Miriam was a penguin. All I did for her costume was sew a piece of felt onto a black turtleneck--yes, my costume-making skills are just that good. My mom gave her the hat. Actually, my mom lent us Rachel's costume as well, so I really didn't have to do too much sewing. My mom made that chick costume about 30 years ago for a dance routine my sisters did. They are on the bottom row with my cousin, Jenna (from L to R: unknown, Kelli, Abbi, Jenna) circa 1982...or 3...or 4? 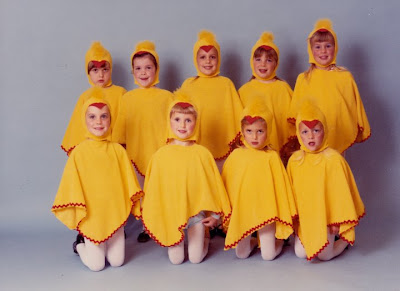 I think it's fun when things have a little history to them--I wore this chick costume once, too. Here's Rachel without her crown on but with her chicken feet on. That's her artwork in the background, too, 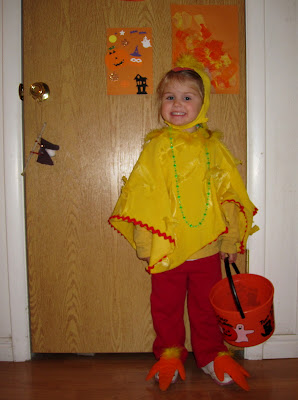 Miriam was so cute and cuddly in her costume. I think babies are cute no matter what they dress up as, for the most part, which is nice for costume-challenged mommies like myself because there's no way to go wrong. 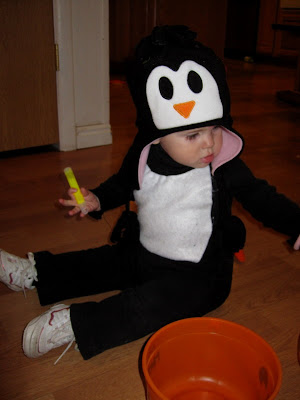 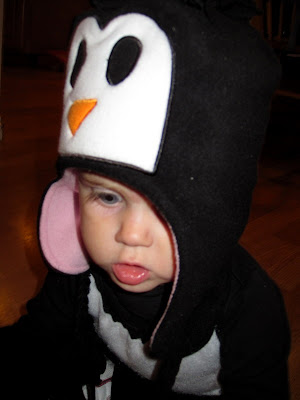 When we left to go trick-or-treating it was pouring rain. I bundled the girls up but by the time we got to the end of our street, only stopping at two houses along the way, Miriam had pulled off her hat, mittens, and blanket, and Rachel's pants were soaked due to the amount of splashing she did in the puddles. Luckily the rain was letting up by this point because Rachel was completely sold on the idea of trick-or-treating. She thought it was, in a word, awesome. She bravely said "Trick or treat!" at every door and usually remembered to say "Thank you!" without prompting.
I think it helped that we know our neighbours so well. Or, more truthfully, because we only went to the neighbours' that we knew well. I wasn't bent on visiting every single house on the route (as I was when I was a trick-or-treater years ago) because Rachel's three. She doesn't need that much candy.
We went to one house that had a big, blow up pumpkin, ghost, and spider. When we walked past the garage a big, scary monster jumped out from behind a bush. Rachel just about died on the spot. She started screaming and ran back to cower behind me. The "monster" took off his mask and apologized--he hadn't realized quite how young she was--and she got extra treats at that house.
Similar scenarios happened throughout the evening. Rachel said that she liked Halloween, "but only the fun part, not the 'booky part because I don't like to be scared."
Daddy turned around when we were about 1/3 of the way to my mom's house. He had to go home to do homework and pass out candy, plus we didn't need him to carry the umbrella anymore because the rain had decided to give us a break. One house we went to had a set of stairs leading to the front door so I left the stroller parked at the bottom of the stairs with Meme inside and Rachel and I walked up to the door together. After Rachel had chosen her treat the lady at the door said, "You can go ahead and choose a treat for your brother, too."
"No, I can't," said Rachel, shaking her head.
"Sure you can," the lady said, pushing the bowl toward Rachel.
"Well, I can't because I don't have any brothers yet, but one day my brother Sco..."
I cut her off. "That's her sister in the stroller."
"Well, then take a treat for your sister," said the lady.
Rachel grabbed a treat for Miriam and as we were walking down the stairs she said, "Why did that lady think Meme was a boy?"
"Well, sometimes it is hard to tell if a little baby is a boy or a girl, especially if they are wearing a penguin costume," I explained.
When we got to Naanii's house we went inside to warm up for a while and then I asked if I could just leave Meme there while Rachel and I continued--she was much more gung-ho about trick-or-treating than I thought she would be and kept saying, "Let's go to another house!"
She had a good scare at my mom's next door neighbour's house. There was a boy standing in front of us getting his treat--he was dressed as death, personified--and said, "Trick or treat or death!" He got his treat (I guess Sally didn't want a trick or death...weird) and then turned around. He spooked Rachel so badly with his mask and plastic scythe.
"Oh, now isn't this quite polar opposite we have going on here?" Sally laughed, "A baby chick and the grim reaper!"
Later Rachel tried to quote the boy but she got it a little wrong--I think her recollection was coloured by the memory of the scythe he was carrying. "Why did that boy say 'Trick or treat or I'll poke your eye out?' That's silly!"
At one house we got a little container of play-dough.
"This isn't a treat," Rachel told the lady holding the bowl.
"It's still a treat," I told Rachel, "A treat is just a nice thing--it doesn't have to be candy. Don't you want play-dough?"
"Yes," she said.
"You can choose any colour you'd like," the lady said, and told me to take one for Miriam, too, because she noticed she wasn't with us.
Later, when we were walking home on the other side of the street Rachel asked to go back to that house again.
"But we already went there," I said.
"I know, Mom, but we should go back because they have play-dough!"
At one house in my parents' ward, a man asked which Halloween this was for Rachel. In retrospect I think he was trying to ask how old she was but I answered that it was her first--this was the first time she experienced trick-or-treating and all the other Halloween traditions we skimped on when we lived in Egypt. He may have been a little baffled by my answer since Rachel is on the large-side for a one-year-old and she's walking and talking up a storm...so...he probably thought I was crazy. Oh, well.
In the words of Rachel, "This is the bestest Halloween, ever!"
Posted by Nancy at 11:07 PM