Before we left I had Andrew check the weather report and then I ran to the closet, dug out some extra sweaters and some winter hats and packed those, too. It's a good thing I did because Friday's weather stayed true to what the weatherman predicted and it got cold and windy and wet.


We woke up rather early in the morning because the BYU kids were getting ready to hike Calf Creek.

Rachel had been sleeping with me and Miriam's "camping crib" was right next to our bed. She stirred, sat up, reached for me, and said, "Momma!"

I pulled her out the pack'n'play and into my bed where she promptly stuck her thumb in her mouth and cuddled next to me for a few minutes. She must not have been quite awake through all of that because about five minutes later her eyes fluttered open and she pulled her thumb out of her mouth.

She could see the side of the pack'n'play from where she was laying in my bed and assumed that I somehow ended up in her bed instead of the other way around. Her intonation just about killed me, not to mention the way she cocked her head and raised her eyebrows.

All three of us just about died laughing and then got up to have breakfast in the cabin kitchen, where it was nice and warm.

Some of the BYU kids wondered if the girls and I would be coming on the hike.

"No way!" I said. "I'm not hiking all that way dragging two kids with me!"

They also heard me say things like, "I'll do that in a minute. Mommy is having sitting-down time right now and I'm not getting up for a while because sitting-down time just started." And, "I am not picking that up. Will you crawl under the table and get it yourself?" And, "Don't squish my tummy." And, "I am not climbing up in the loft just to get that." And, about ten minutes after breakfast, "Is it nap time yet?"

Later I learned that at least half of them had no idea I was pregnant. So, either they're really unobservant and didn't notice the belly or my lazy mothering...or they were just partially unobservant and didn't notice the belly but did notice my laziness. Either way, when one girl found out I was pregnant she said, "Well, no wonder you didn't go on the hike! It was surprisingly difficult. I wouldn't have wanted to drag two kids down and up and I'm not pregnant."

Yup. So we didn't go hiking.

Instead we stayed at the cabin and waited for Daddy to arrive. We were all taking bets on when he'd get there. He said that he wanted to get up early so that he could spend most of the day with us but without me to nag him about going to bed there wasn't a chance in the world he got to bed at a decent hour and without me to elbow him in the ribs there was no way he got up when his alarm went off.

I figured he wouldn't leave the house any earlier than 10:00, which would put his estimated time of arrival at 1:30 PM, which gave me the whole live-long morning to entertain the girls. 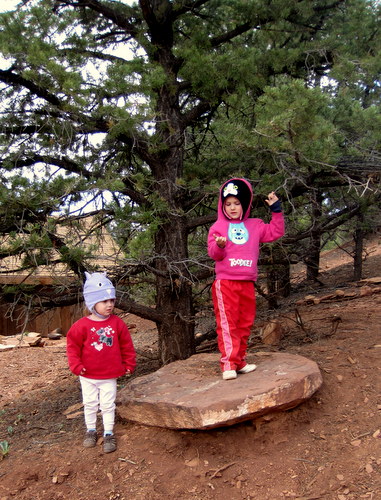 We tried to go for a walk outside but it was too cold and windy (Miriam started to cry) so we went back into the cabin, layered up, and tried for a walk a second time. It was still cold and windy but we got much farther than we got the first time. 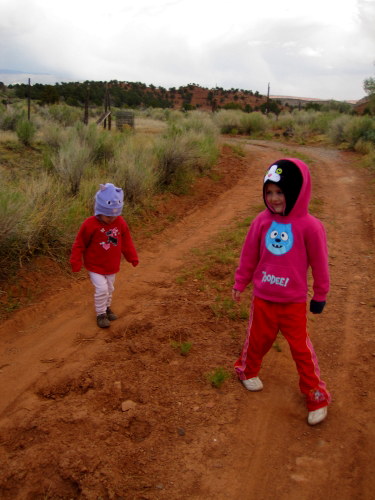 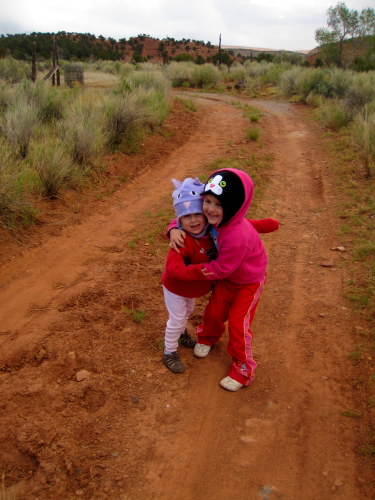 So eventually we gave up, had a nice warm shower, and then hung out in the cabin until Daddy got there. The girls played Dominoes. Rather, they played with the Dominoes, building towers and castles and all sorts of things. 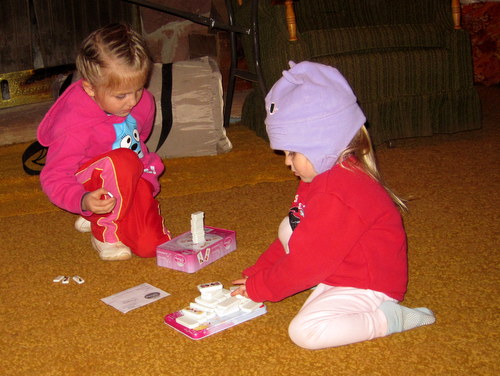 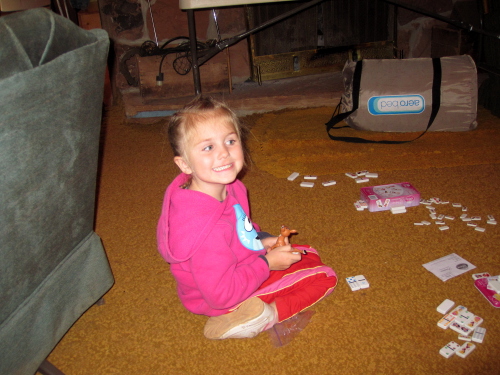 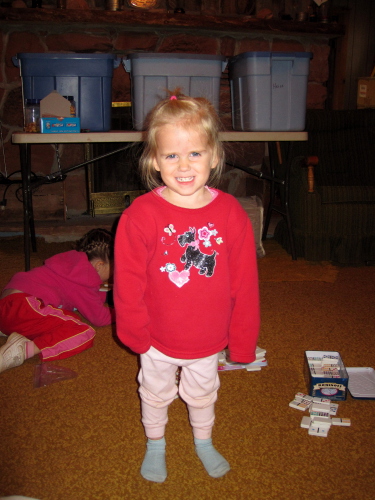 Rachel ran out to greet him. She was so happy to see him! The wind had died down some so the two of them went exploring while I joined Miriam in napping.

After they'd gotten back and done some more quiet cabin-y things, I woke up and then Daddy surprised Miriam by waking her up ("Uhhh...uhh...uhh...Daddy?" she said). And then it began to hail, which Rachel found very exciting. 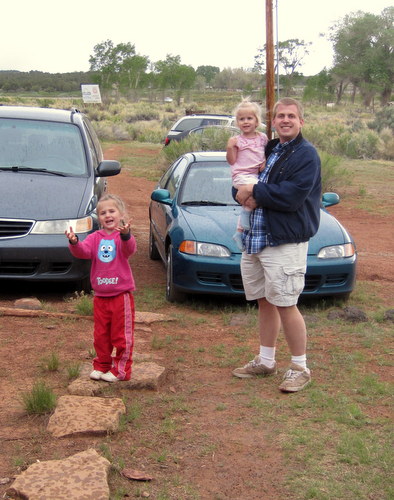 The girls spent a while colouring in the loft while everyone bustled about to move tents and sleeping bags and backpacks around. 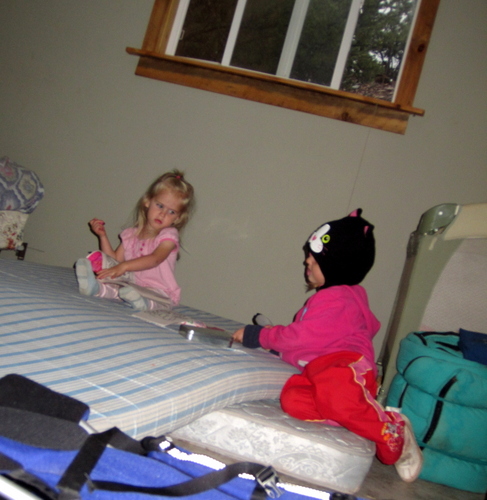 The boys moved their tents under the pavilion. The girls abandoned their tent (because the zipper on the door was broken so they'd only been zipping the screen) and moved into the cabin with us. It was one big slumber party! 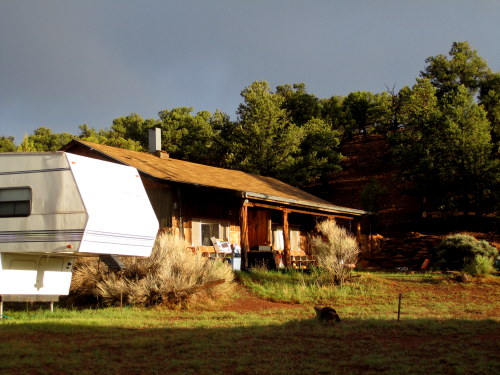 We had dinner in the cabin and played games and then, shortly before sundown, the sun came out and started to dry up all the rain. Even though the wood had gotten rather damp, a couple of the boys somehow got a fire roaring in the fire pit (I believe lighter fluid was involved) and so we spent a few minutes warming ourselves by the fire and enjoying the little bit of sunshine that we saw all day. 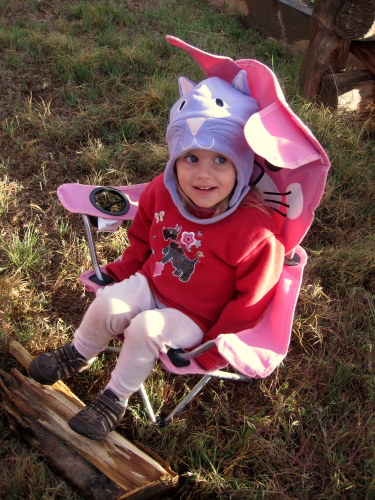 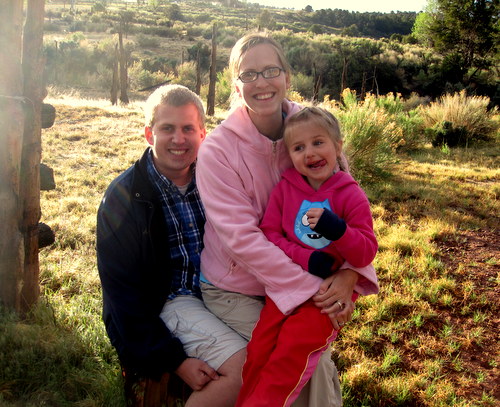 Then it was time for bed. It was rather convenient that it got warm enough (by the fire, anyway) that all the "big kids" went outside while the girls tried to go to sleep. We've been reading Little House in the Big Woods and so we read a couple of chapters of that while Andrew fiddled with the telescope we borrowed from our friends Shallee and Dan. I went outside, into the cold, to see what he was doing but soon grew disinterested (from the cold—"Hmmm...that's interesting...I'm freezing...see ya.") and went inside.

Rachel got up to go potty so on the way back to bed I grabbed her and let her go outside to peek through the telescope on the condition that she not tell Miriam (who wasn't asleep, either) what she was doing when she got back inside.

Daddy showed Rachel Venus and Mars and then I took her back inside to go to bed but instead of running to the loft she ran into the kitchen and whispered loudly to Grandpa, "I saw Venus in a telescope!"

Then she pitter-pattered off to the loft and as she was climbing the ladder she proudly whispered, "I didn't tell Miriam anything, Mommy!"

Our slumber party went well, though I can't imagine how those girls were able to sleep on the ancient couches down in the "living room." Not after watching mice dart underneath them...not after seeing so many spiders lurking behind them... I can hardly sit on those couches. I wouldn't dream of sleeping on them. The loft... Well, no one has ever seen a mouse in the loft (though I did find a little evidence that mice had been there) and the walls and floor and ceiling are new and usually clean-swept. It's a much more comforting place (for me) to sleep.

I was extra glad to be sleeping in the cabin with the way the wind was howling outside. I can only imagine how loudly the tents outside were snapping while the wind grabbed at them—there is no way my girls would have slept through that, which would have meant we'd have been up in the night than we were, anyway.

Rachel slept with Grandma in her bed and sniffled and coughed all night long. Poor Grandma.
Posted by Nancy at 1:23 AM