Yesterday Miriam had a bit of an accident. She had found a piece of string and came up to me, asking if I would help her cut it. I told her that I wasn't ready to cut string right then and that she'd have to wait. Rachel, however, was working on some sort of craft and said that she was ready to cut things. So Rachel grabbed the scissors and cut the string in half while Miriam held it taut. Then she left to go cut some papers.

"Rachel, be sure to put those scissors back when you're finished," I cautioned. "I don't want your sister to find them on the floor and think she needs to play with them."

"Don't worry, I will!" Rachel said, with a sigh and an eye-roll.

A few minutes later Miriam ran up to me looking very concerned.

"Mom!" she panicked, "There's dirty stuff on my hands! And there just keeps getting more and more!"

"Let me see," I said and grabbed her hands to look at them. "Oh! That's not dirty stuff—that's blood!"

I could see a definite cut in her thumb, which was obviously the source for the steady trickle of blood.

(You can have a steady trickle, right? Because it's not like this was a gushing wound—blood wasn't pouring out or spraying out or anything like that. This was just a little cut that kept steadily bleeding—like how the tortoise ran the race in The Tortoise and the Hare.)

I rushed her off to the bathroom where we washed and dried off her thumb (and her hands, which were covered in blood). We had to keep blotting her cut off while we found an appropriate bandaid. Those cute cartoon-covered bandaids are nice because my kids, who have had phobias of bandaids, will actually wear them when the need arises. But, honestly, they are a pain in the royal hiney!

"Do you want this one with flowers on it?"

"I don't know if I have Elmo. Oh, look at that—here's a box of Sesame Street bandaids. Let's see... I have Ernie and I have Bert—which one do you want?"

"Right..." I sifted quickly through the bandaids until I saw a red blob, which I assumed was Elmo. It's difficult to tell through the paper covers on the bandaids. "Here's Elmo!"

We finally got her all bandaged up and then went hunting through the house for evidence.

Rachel felt awful. We had a good discussion about responsible scissor use.

"And why do we have to be sure to put the scissors away when we're finished with them?" was my concluding question.

"So that Miriam won't find them and try to use them and accidentally cut herself."

"Want me to kiss it?" Rachel asked.

"No!" Miriam scoffed. "'Cuz there's a bandaid and we don't kiss bandaids!"

It was Miriam's turn for a lecture now—she knows the rules about scissors, too, and she broke them so she can't really claim to be "the victim" of this incident.

"Do we play with scissors?" I asked Miriam. "Even if they are conveniently left lying around?" I added, casting a meaningful look at sheepish Rachel.

"'Cuz—we can broke our thumbs. And our hands, too," she said solemnly.

Rachel's punishment was to feel horrible for "causing" Miriam's injury. Miriam's punishment was that she wasn't able to suck on her favourite sucking-thumb the whole night long ('cuz there's a bandaid and we don't suck bandaids). Natural consequences are fabulous.

Here are my two girls this morning, cuddling in my bed before getting ready for the day. 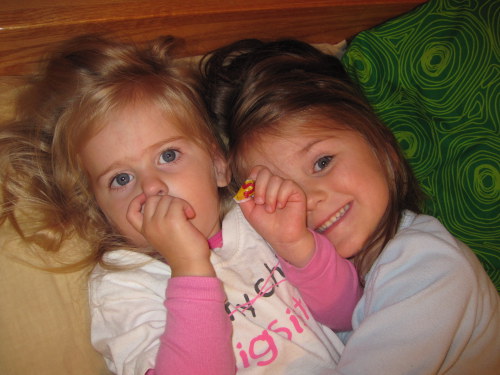 Later in the day Miriam's bandaid fell off and she came to show me.

Now that her cut isn't bleeding anymore I can see it's just a superficial cut, about a centimeter wide. Unfortunately her thumb is so chapped (from sucking on it so much) that her skin is rather delicate and so when she cut it, even though it wasn't a bad cut, it bled a lot. That's my theory, anyway.

I was amazed there were no tears through any of this. It helps, I think, that she hasn't ever bled before and thought her blood was dirt. She'll probably cry the next time she's cut simply because there will be blood (and that's supposed to be on the inside of us; having it come out is just freaky (whether or not it actually hurts)).

In happier news, Rachel wore pants to school today—actual, factual pants with a zipper, a button, and pockets and everything. Black cords, to be exact. 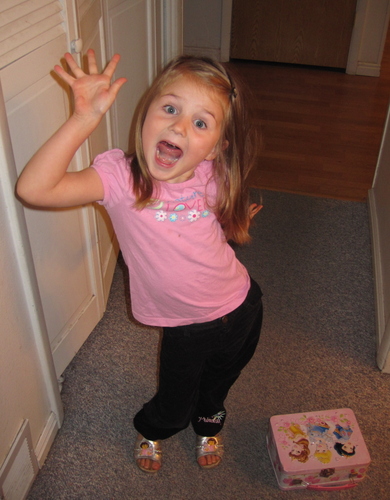 That might not sound momentous to you but for Rachel it's a huge deal. My girls are big on stretchy-waisted pants made out of jersey-type material. Basically, leggings...but not necessarily tight. I remember having that same preference as a child. Still, it's nice to see Rachel breaking into the world of jeans. We have a whole pile of nearly-new pants that Rachel refuses to wear. Instead she keeps dressing in the same leggings over and over again. Except for today for some reason.

I now have half a hope that she'll go to at least the first day of kindergarten looking decently dressed...
Posted by Nancy at 1:49 AM