Toilets and the temple (April 25)

BYU’s MPA study abroad to Ghana has three main purposes: (1) complete a consulting project for a nonprofit involved in some aspect of international development, (2) visit NGOs already working on various social issues, and (3) have fun doing touristy things. Last year we had two projects: research in price trends for vegetables sold in the open air markets, and research in the vocational and technical sectors of tertiary education for the Church’s PEF program (I worked on that one).

This year, since we have a much smaller group, we only have one project (that I get to sit back and watch—as TA I don’t have to do any of the research or writing, which is a nice break). A Ghanaian engineer and member of the Church named Kweku Ano developed an incredible toilet system named the Biofill. Ghana has a serious sanitation crisis, with only a small percentage of the population having access to any sort of improved toilet facility (i.e. something that flushes). Wealthier people have septic tanks that clog and have to be emptied on a monthly basis; people in the middle class share community pit latrines; poor people practice open defecation (the official euphemism for pooping wherever they want to). There isn’t really any sort of public plumbing system, since 97% of the public treatment plants in the country are nonoperational.

Kweku’s Biofill is an incredible solution to this sanitation crisis though. It consists of a 3’x2’x2’concrete box with two layers of porous concrete and a bunch of bugs and microorganisms. Regular toilets flush into the box (thus replacing a septic tank) and liquid waste (i.e. #1) is filtered through the layers of concrete, purified, and left to seep out into the ground, where it can water surrounding plants. Solid waste (i.e #2) gathers on top of the first layer of concrete and gets digested by a mini ecosystem of worms, beetles, centipedes, and special poop-eating bacteria. The little poopy world can handle 10–15 people almost indefinitely. Kweku’s has used a Biofill at his office for 5 years and hasn’t had to empty it once. And there’s no smell whatsoever. It’s so cool.

Kweku’s already installed 2,000 of these Biofill systems across Ghana and is looking to expand somehow. He has partnered with an American organization named [Sainterre][sainterre] created by a BYU student a few years ago to help with development and distribution (Sainterre changed the digester’s name to “Soilet”). Our project this year is to do some market research into NGO and governmental demand and interest in the Biofill, which means that all our visits will deal with discussions on human waste. Fun times :)

This morning we went Kweku’s workshop in the neighborhood of Dzorwulu, which he shares with Empower Playgrounds. We arrived early, so we walked down the street to another fascinating organization named Trashy Bags, which collects, cleans, and sews plastic water bags and billboards into usable items like reusable grocery bags. I bought a cheap toiletry bag, replacing my collection of like 6 ziploc bags.

After Trashy Bags, we finally got to meet with Kweku, who showed off his Biofill and his other crazy inventions. He has a system of tilapia ponds that irrigate his garden, kill mosquitos, and water his plants. He has several different versions of the Biofill in production, including one where the water from the sink runs off into the toilet and flushes it into the magical digester (perfect for places without running water; just bring a little bottle or bag of drinking water to wash your hands). He is also (presumably) the only person in Ghana that grows grapes—he has a series of refrigerated irrigation tubes that grapevines grow around for temperature control. He’s a fascinating person!

Once we had looked at all of Kweku’s incredible inventions, we headed off to the Accra Mall for lunch. It hasn’t changed much since last year. It’s still a haven for expats and rich Ghanaians, and was a reminder that we still need to become official expats. We definitely need to line up some sort of awesome international job after I finish at Duke.

After lunch we went to the temple to do baptisms for the dead, which is always an awesome experience. I didn’t have my camera with me (I actually didn’t use it at all today… too much rain), so here’s a picture from last year: 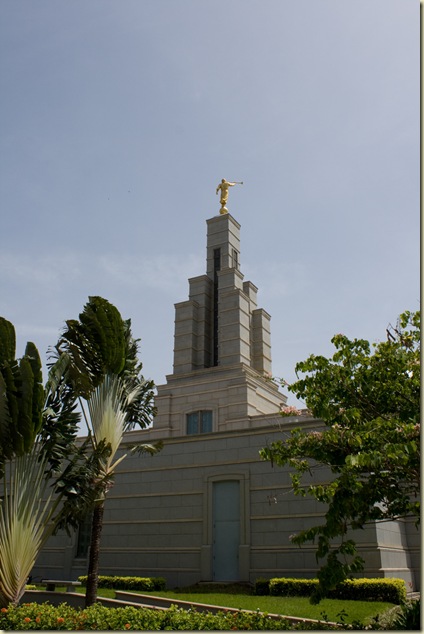 Unlike last year, where we had to be the temple workers for all aspects of the baptisms, this year they had Ghanaian witnesses for us, which meant that we could all get baptized, which was fun. I hadn’t been baptized since probably before my mission (9ish years…). Other than a newly baptized Ghanaian member named Andrew (who has two daughters, aged 4 and 2), we had the place to ourselves.

We ended the day back at the Alma House, with time to relax, watch football, and read (with me staying up until 2 AM finishing one of the Hunger Games books). Tomorrow we leave this wonderful guest house and head up to the Volta Region for some touristy things. Woot!
Posted by Andrew at 5:00 PM