Somewhere near the Togo–Ghana border, up near the bottom of Lake Volta, lies Wli Waterfall, the tallest waterfall in West Africa. Hiking up to it and is one of the perennial highlights of the MPA Ghana trip, and this year was no exception.
Last year, if you recall, the village at the base of the waterfall hike was full of goats, chickens, and a solitary ostrich—the only ostrich I’ve seen in Ghana. This year I discovered why. An overzealous Peace Corps volunteer a few years ago decided that ostrich farming in Ghana would be a fantastic idea for promoting local agriculture and economic development. They donated 30ish ostriches to this little village as a pilot program. Unfortunately, Ghanaians don’t really eat ostrich meat or eggs, and ostrich diets are considerably different from chickens, goats, turkeys, or the other animals villagers traditionally raise. The experimental ostriches slowly died off from neglect. Last year there was only one left; this year he/she was gone.

The hike up to the waterfall was uneventful and gorgeous. I love the strangely shaped Ghanaian hills covered in jungle green. 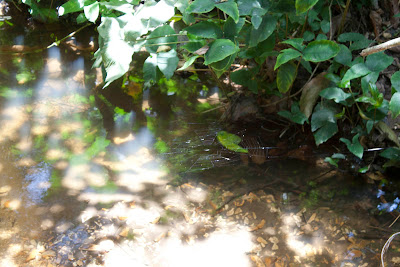 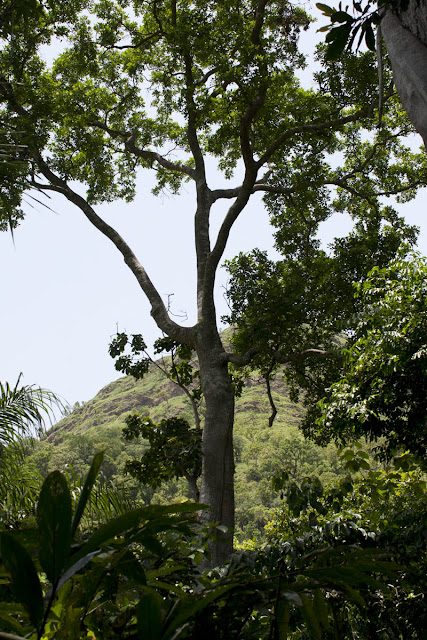 The waterfall, again, was beautiful. 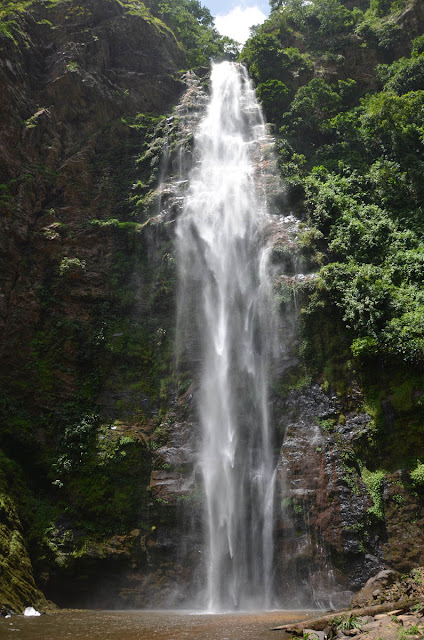 This and all the rest of the photos in this post were taken by Chris Owen, who was far more diligent about taking pictures today than I was :)

We spent a couple hours chilling at the waterfall. We had it mostly to ourselves for the first 30–45 minutes, but then a swarm of three or four dozen college-age Ghanaians showed up. Most were harmless, wanting to take pictures with all the Obrunis (white people), but a few apparently snooped in Gillian’s backpack, stealing a few credit cards and her driver’s license. Lame. 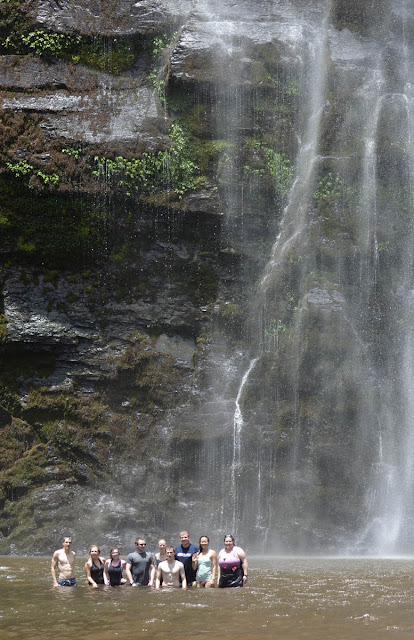 During our hike back to the base village, I spend lots of time watching the ground, trying to avoid repeating the nail experience from last year. I’m happy to report that (1) I wore actual shoes on the hike, and (2) I did not step on any rusty nails. Progress!

While watching the ground, I saw two fuzzy little balls, which I assumed were some sort of fuzzy nuts. I stepped over them and kept walking, but Sam, the MBA/engineering student in our group, noticed that the little balls were moving. Breathing. It turned out that the two balls were the head and body of a newborn monkey. Like über newborn. Hours old. 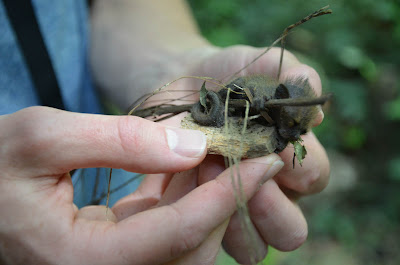 Monkeys in the Volta jungles build nests up in the trees for their babies. This one had fallen from its nest and was alone on the path. Sam picked it up and we ran ahead to find our trail guide, who we assumed would know what to do with it. Once we caught up with him, he said that there was no hope for the monkey. It was too young to do anything but nurse, it was probably too injured from its fall from the nest, and we had inadvertently taken it far from its nest. He put it on a branch to die. 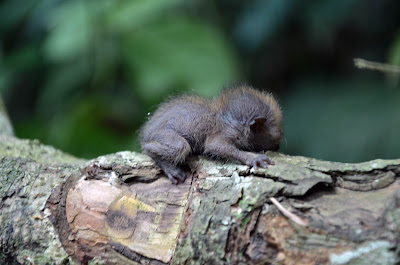 Sam felt bad for the baby monkey, so as soon as the guide moved on, he grabbed the baby and ran back along the trail to find its nest. He found the place where it had fallen but couldn’t see any nest in the trees, so he put the monkey off to the side of the trail in hopes that mother could find it. The baby probably died, but we tried. And ironically, it was the money-grubbing capitalist MBA that helped it, not one of us noble MPAs. :)

After we got back to the base village, we headed off to the Tafi Atome monkey sanctuary to feed monkeys. In all previous years, MPA students have been able to feed the monkeys by holding bananas up in the air and waiting for monkeys to drop down from the trees to grab them. This was the case last year too.

This year, however, the monkeys were insane. None were in the trees—they were all in the village waiting for us. And they were most definitely not shy. They climbed and jumped all over us. All we had to do was hold a banana and wait to be attacked.

I grabbed a banana from the plastic bag and lifted up my arm for 2–3 seconds before a furry blur crashed into my chest. A monkey climbing on Aaron (the faculty director), who was standing on the other side of our group, decided that he wanted my banana right then. It leapt from Aaron’s shoulder, bounced off someone else’s back, and crashed into me, apparently miscalculating its jump. Right after his jump, another monkey jumped on my arm and started going to town on the banana. The flying monkey then climbed up my front, and eventually both monkeys were on my arm, pigging out on a banana. 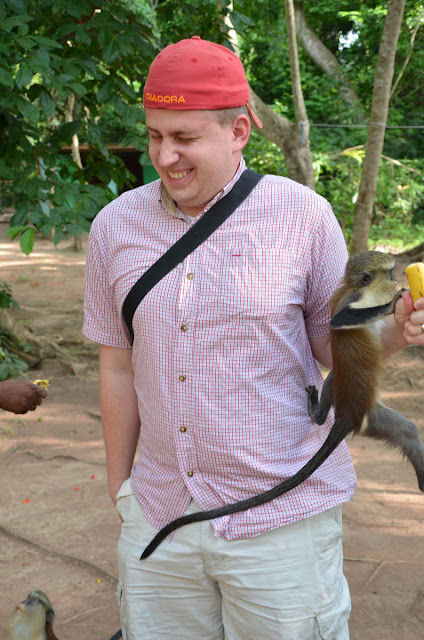 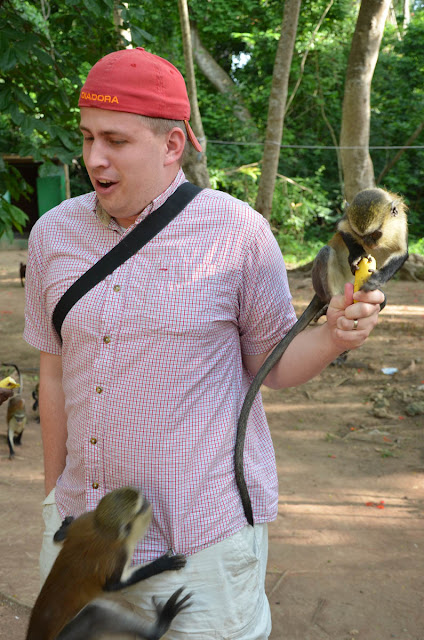 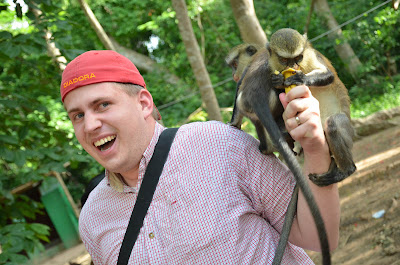 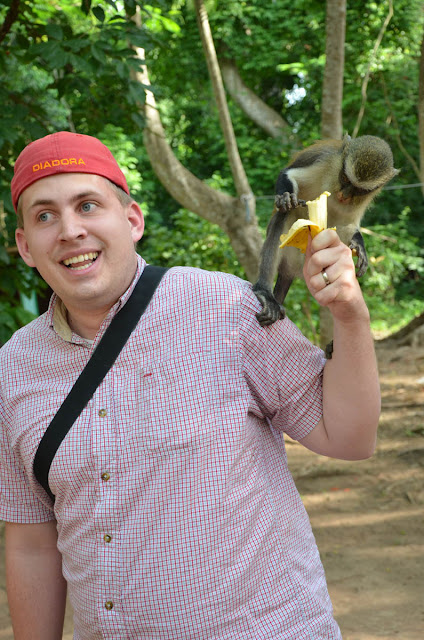 The monkeys were far more adorable when they weren’t attacking me. 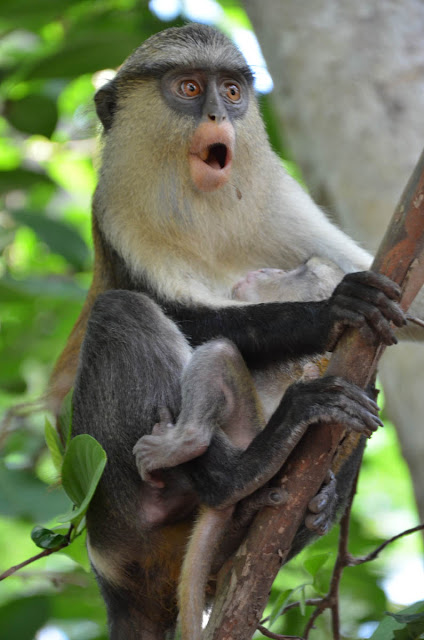 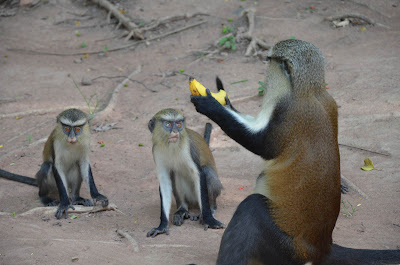 Once we were done playing with the crazy monkeys, we drove down the road to a kente weaving village. Last year, the village we visited was awesome; extraordinarily friendly people showed us their outdoor weaving machines and enthusiastically demonstrated how it all worked. The kids in the village swarmed us and danced and played with the students in the group.

This year we went to a different village that had been helped and consulted by another Peace Corps volunteer. The village had received funding for an enclosed shelter for their looms (since it rains a lot in the Volta Region), but apparently in exchange for getting the shelter, the weavers had to change their business model. Instead of letting random tour busses come through and visit, this village charges a fairly steep entrance fee for looking at the looms. The loom manager told us that he could waive the entrance fee for our whole group if a few of the people in our group bought kente fabric. Even though that kind of deal made no sense, we decided to do it.

The loom tour was kind of lame and was focused entirely on getting us to buy their stuff. Out of a duty to waive entrance fees, lots of the students bought stuff from the swarms of high-pressure salesmen/weavers. I didn’t take any pictures since I mostly tried to avoid the salesmen.

As we loaded the bus, the manager came and stopped us. He had changed his mind about the waived entrance fees. Even though we had bought stuff, he wanted us to pay up. Fred, our bus driver, got irate and chewed him out, threatening to call up the tourist police and report the village to all his tour bus driver friends, but the manager was unmoved. Aaron and I walked over to the hut acting as the loom office and paid up. The manager then asked for tips. Seriously? After all their smarminess and backtracking they still wanted tips?

On our drive out, we learned that the Peace Corps volunteer had envisioned a commercial tourist kente village that charged entrance fees, feeling that the traditional “come and see what we’re doing and buy stuff if you want to” model was inefficient. His vision unfortunately resulted in the smarmiest kente village in the region. Grr.

Like the ostriches at Wli, the commercialized kente village idea was a misguided attempt to help alleviate poverty without fully understanding other underlying dynamics, which kind of ruins everything.

Despite the misguided efforts of the Peace Corps, our touristy day in the Volta Region was fantastic. Now I just need to hope I don’t get monkey rabies :)
Posted by Andrew at 7:36 PM