There's always more to say about Benjamin. He's  had a pretty busy life, and just this week he's made some major changes around here. 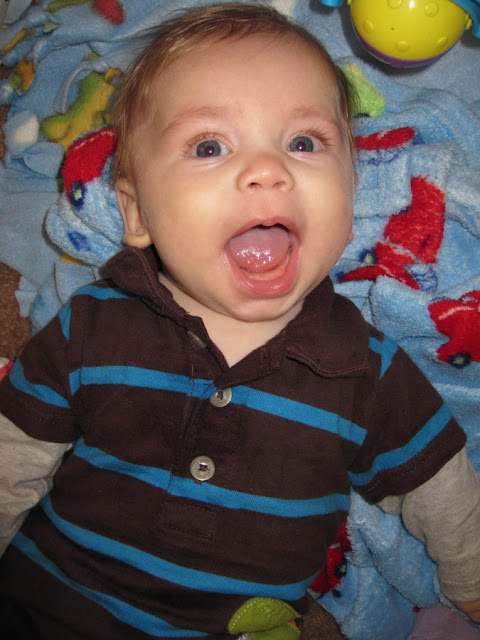 Then (as if the headrest thing wasn't enough) Andrew declared Benjamin to have outgrown his little co-sleeper. *sob* 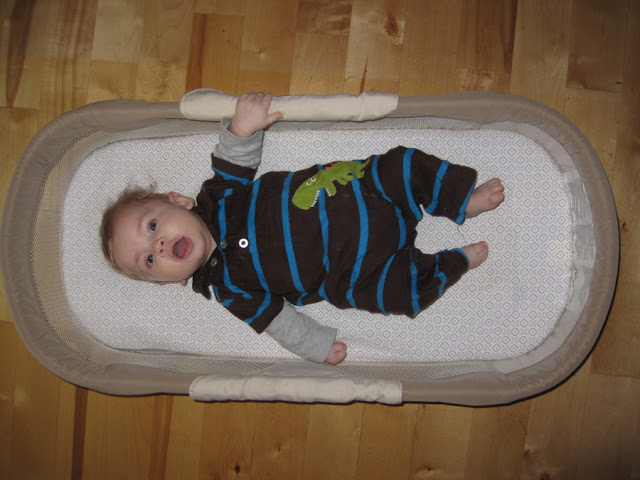 I suppose it was time to move him out of here since he's been rolling for months now and he can hold both sides of the co-sleeper and, frankly, he looks huge in it. 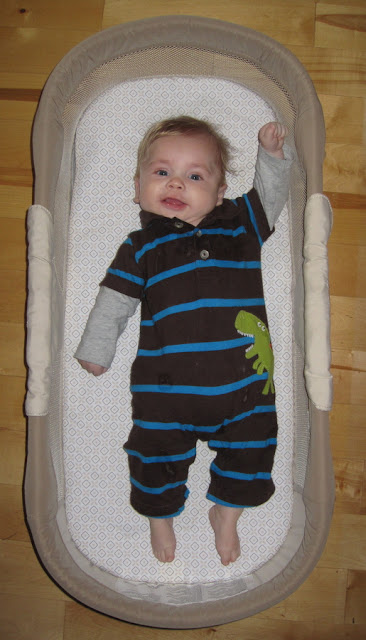 So we took it away on Thursday and got his pack'n'play ready. He's still just at the foot of our bed. I'm not ready for him to have his own room yet. And he still spends most of the night in our bed, anyway, because he sleeps so cosily after he nurses and snuggles up against me. If I leave him in his own bed he squirms and fusses all night long.

Here he is trying out the pack'n'play: 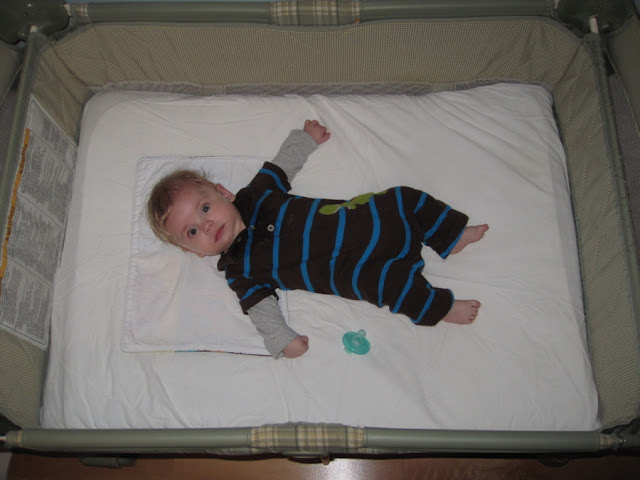 He wasn't too sure about it at first but he warmed up to it: 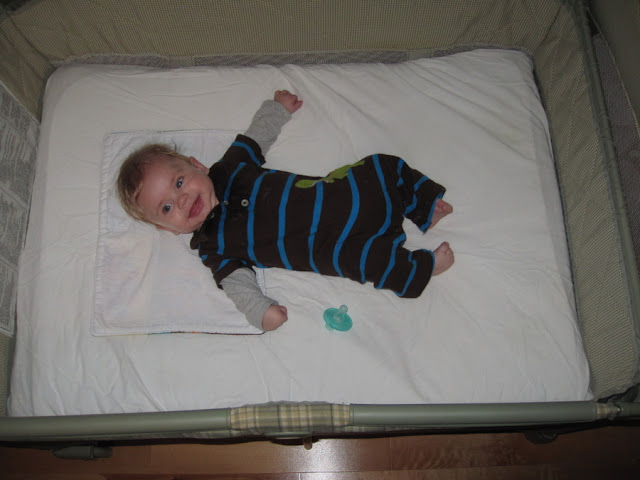 And here he is sleeping in it for the first time (November 1): 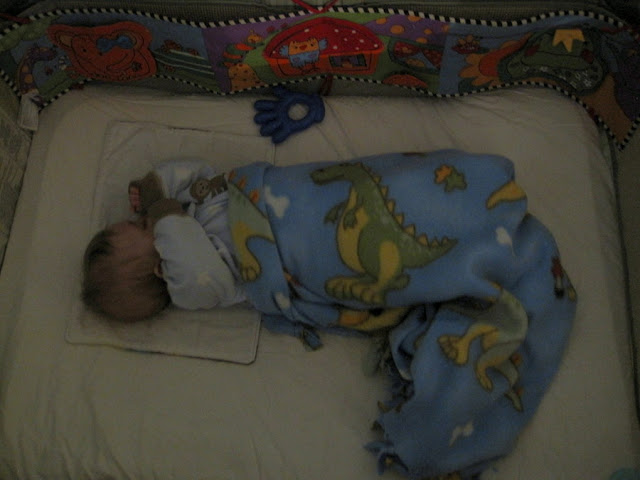 He goes to bed in his own bed every night but rarely (if ever) does he wake up in his own bed. I put the crib bumper in there to help him transition to the crib when the time comes (don't worry; it's not a padded bumper so I don't think it's a suffocation hazard...and (did I mention?) he doesn't spend a whole lot of time in his bassinet anyway).

Another new thing he tried out on Thursday was the booster seat. My, has that booster seat seen better days! It's on its fourth house, third child. It's been from Utah to Egypt and back again. Benjamin doesn't care about its condition, though, he loves it for what it is—a ticket to the dinner table! 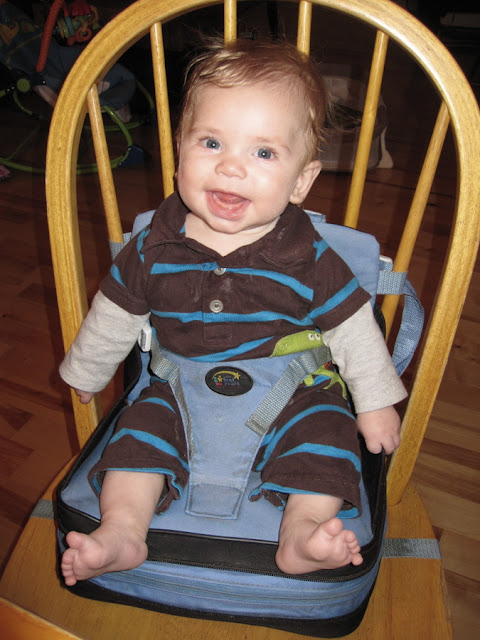 I haven't even considered starting him on solid foods yet but dinnertime has been miserable. We've tried leaving him in his little rocking chair during meals but it's too low to the ground and away from the action for this little guy. He loved sitting around the table with everybody else. I ate a full plate of food before he started fussing (for the past few months I've been lucky to snag a few bites between bouncing him so sitting down to eat a full meal in one go was really something special)!

Here are some more pictures of him in his chair from today. All his attempts at napping were thwarted by his impeccably noisy sisters. Every time I'd get him to doze off they'd start some new, fantastically loud game (such as running around the house with strollers) or would fall off the bathroom stool and start screaming or would be playing in their room quietly (as instructed) but then break out into a yelling match. He was so sleepy at lunchtime that he was holding onto the sides of his chair and gazing off into space. 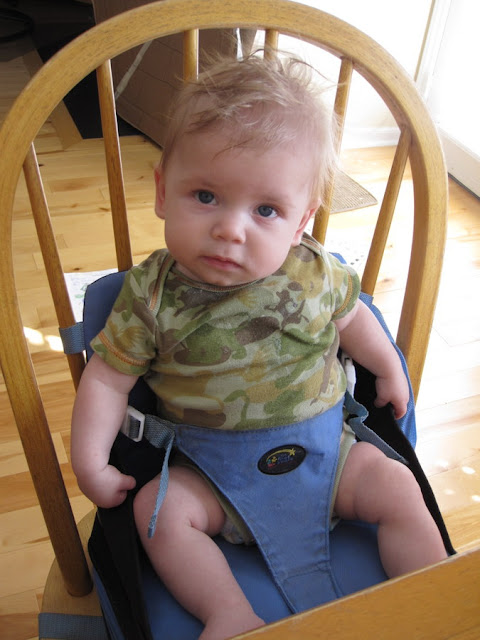 But he's been well trained and knows exactly what to do when Mommy brings out that silver box of hers: 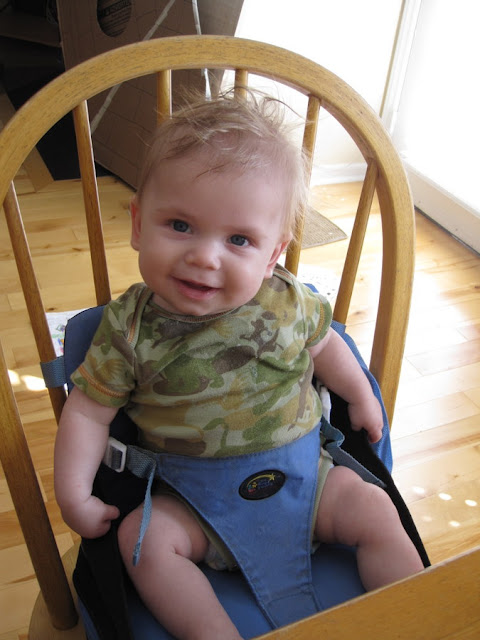 Andrew wanted to be sure that you all know that Benjamin is disgusting—he is most often found dripping in spit-up, no matter how much spit-up you just cleaned up or how long ago he last ate Benjamin can always spit up more. 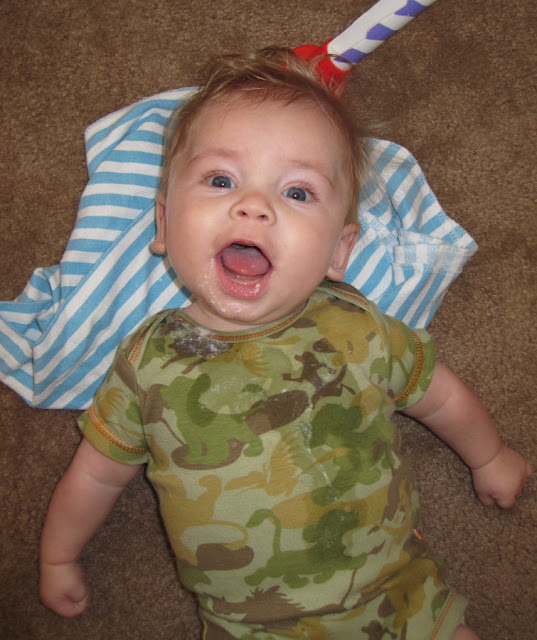 And as a final note about Benjamin (for this post) I thought I should tell you about his sneezes. Benjamin (almost) always begins his sneezes by yelling.

"AHHHHHHH!" he'll scream, then pause, and then sneeze, "Achoo!"

It's hilarious, but even funnier when he thinks he's going to sneeze but then doesn't, when he goes, "AHHHHHH! Ohhh!"
Posted by Nancy at 10:56 PM