It's Remembrance Day! Or Veteran's Day! Or Armistice Day! Or Poppy Day!

Whatever you happen to call it, Rachel had the day off school today because of it, but we began celebrating it yesterday. I don't know why it's not a huge deal here like it is in Canada—where we learn about it in school, have bulletin boards decorated with poppies and white crosses, have assemblies devoted to remembering fallen soldiers and promoting peace, have a moment of silence, have city-wide devotionals...

I suppose Americans spend too much time fighting about whether November should be filled with butterball turkeys or jolly old elves to devote much time to remembering war (and hoping for peace).

I happen to rather like Remembrance Day! Yesterday the girls and I wore poppies to church. 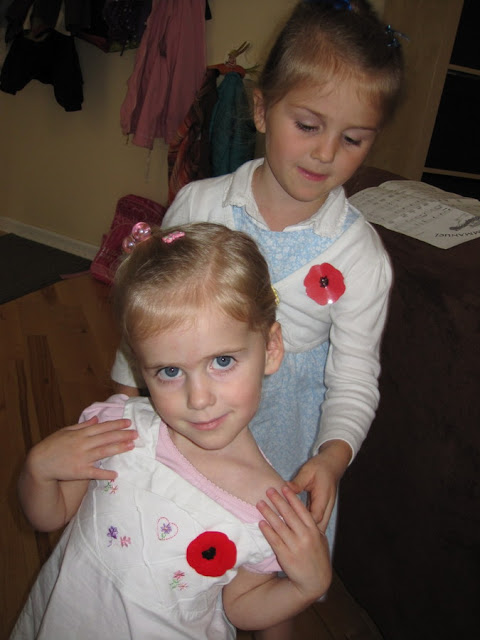 I only have two "real" poppies from Canada. They're not real at all—they're plastic covered with velvety stuff on a straight pin (that I replaced with safer options)—but they're authentic Canadian Remembrance Day Poppies. I told the girls that I was going to wear one and asked if either of them wanted to wear the other one. Rachel shrugged her shoulders and went on playing; Miriam was absolutely gurgling with excitement.

A few minutes after I pinned it on Miriam, however, Rachel came sniffling up to me and said morosely, "I wish you had three poppies."

So we had to "think of a solution," which is something my kids recite in chorus whenever anyone in the family mentions a dilemma. We needed something red and fairly sturdy—more sturdy than regular construction paper. Fortunately the bus pass she had to wear pinned to her shirt for the first couple weeks of school was red card stock, which was laminated for durability. Score!

We traced one of the "real" poppies onto that paper, cut it out, and then Rachel drew the inside part with a permanent marker. We secured it to her sweater with a diaper pin.

Everyone was nearly happy at this point. To help further solidify our solution as a good and happy solution we made an agreement that next year Rachel would get to wear a "real" poppy and it would be someone else's turn to wear the "fake" one. They're all "fake," but you get the idea. 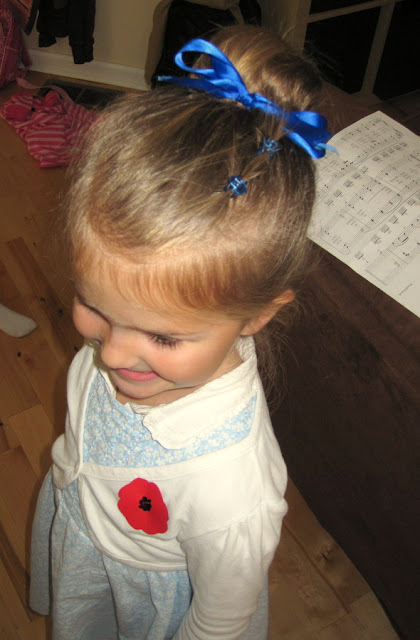 I've been wanting to try a sock bun but haven't wanted to cut the toes off a perfectly good sock so I've been waiting until I have a sock I can destroy. I do, however, have a scrunchie (carryover from the nineties  I know) that, when doubled, made a wonderful base as a bun for Rachel's hair. Her bun turned out beautifully. So beautiful, in fact, that Miriam begged to have her hair put into a bun as well.

Doing Miriam's hair is always a bit of a puzzle. I'll ask her to bring me a brush and a hair elastic so we can do a simple pony tail and she'll come back with a brush, a hair elastic, some bobbles, some clips, some barrettes, a ribbon, and a headband and will want me to incorporate everything into a hairstyle. 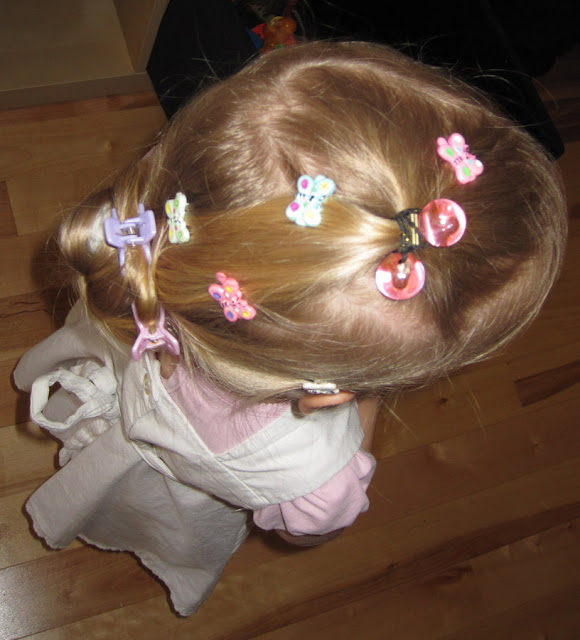 Andrew jokes that she's five pounds heavier after her hair is gussied up than when it's down straight.

Sunday was a good day, though. The veterans in our ward were asked to stand and be recognized, which was nice. Other than that it was just an ordinary day, so I was glad for the poppies. I also recited In Flander's Field to the girls, several times, throughout the day. I'm hoping they'll catch onto it one of these days.

We slept in this morning a bit. Andrew had to get up early and go to campus at his regular time but Rachel didn't have school so he left us all sleeping. The girls came in to wake me and Benjamin up and didn't do a very kind job of it (too much jumping and screaming was involved) so Benjamin and I both woke up a little grumpy. 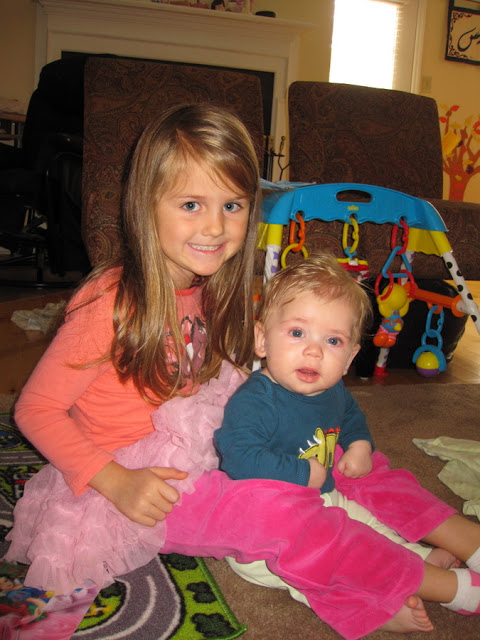 The kids spent the morning playing together while I made some desperate calls to the lost and found at Cameron Stadium. Rachel and Miriam hardly fought at all and instead actually agreed on games to play. They did puzzles together and drew together and put on a few shows for Benjamin and me. The first show was a ballet show, which was lovely. The second show was a prince and princess show (they had to borrow Benjamin for that show). 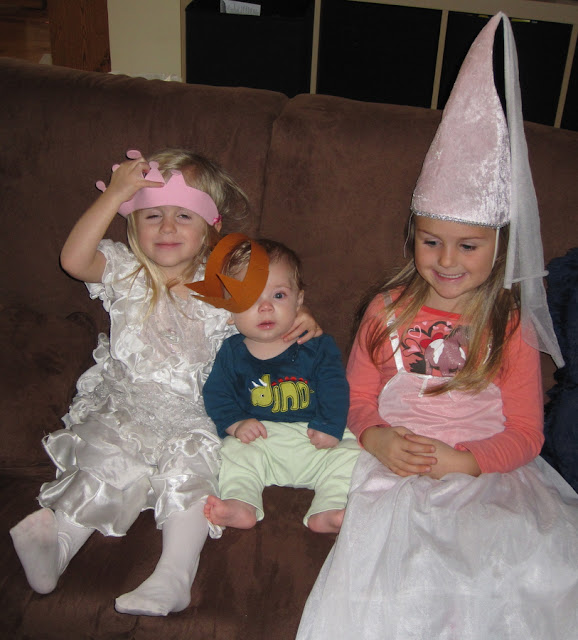 Rachel made Benjamin's crown but instead of cutting a zig-zagging line she cut out strips of paper for the base of the crown and individual triangles for the jags. She brought them to me and asked me to help her staple them on.

Benjamin was happy to be involved in their game (for a little while). 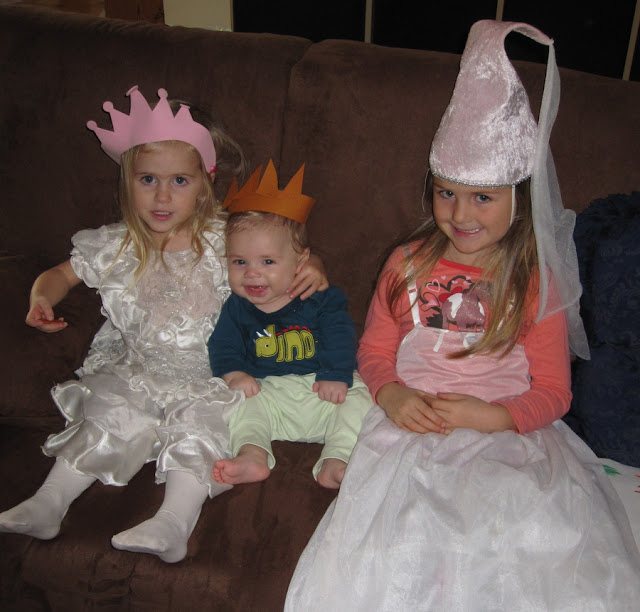 By the afternoon we were all getting a little stir-crazy so we packed a lunch and headed to the park in our wear-whatever-you-want Monday attire (you should see what shirt Miriam has on under that sweater; and you will further down the post): 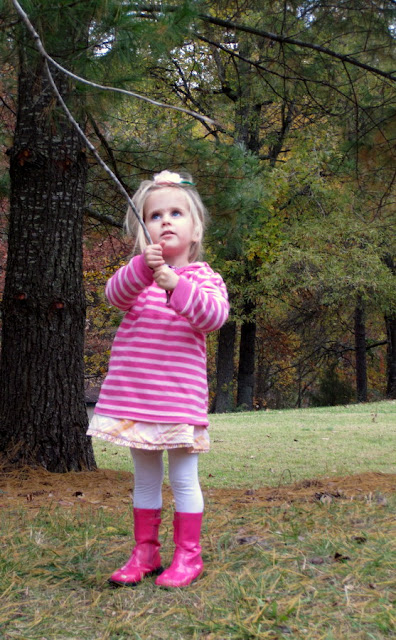 I was hoping for a good hour of playing but we had hardly finished lunch before all the children were crying and needing to go home. Miriam saw a bee. And she needed to go to the bathroom. Rachel fell and hurt her chin on the slide. 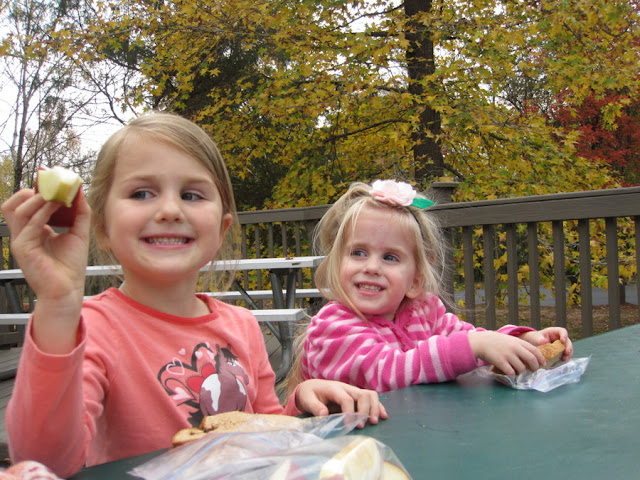 Benjamin screamed until he fell asleep. I was just feeling frustrated so agreed that we should just go home. 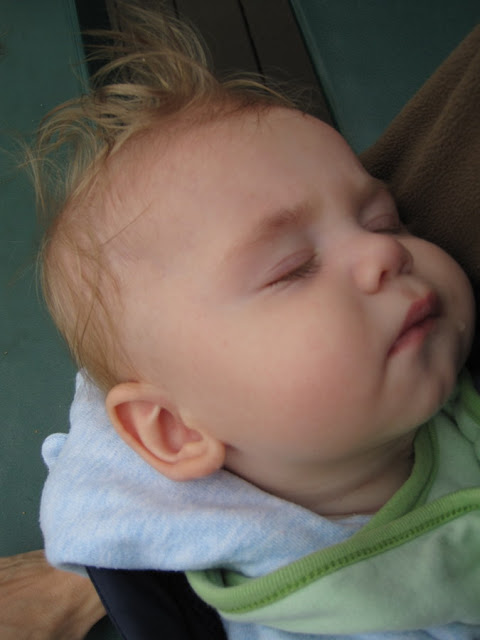 Rachel suggested that Miriam, Benjamin, and I all go down for a nap when we got home. Much to my surprise, Miriam agreed with that plan and Benjamin didn't object either (he just kept sleeping). When we got home Miriam got ready for her nap and tucked herself into bed. Benjamin was miraculously still asleep and I was rather exhausted so I said, "Rachel, are you going to be okay if I lie down for a bit?"

"Yeah," she said. "You can have a nap. I have a few letters to write. I could use some quiet."

So I went down for a nap with Benjamin. Lately that seems to be the only way to get him into a nice, deep sleep. If he falls asleep and I lie him down he'll wake up within a half hour. But if he falls asleep and I lie down with him he'll stay asleep for hours, so I get a little nap and he gets a long nap and everyone is much happier all around. So that's what we did.

I slept for about forty-five minutes and when I woke up the house was completely silent.

I slithered away from Benjamin and went to check on Rachel. She was still busy at the kitchen table. She'd written several drafts of a letter to her friend Luke and finally had a good copy. She'd drawn several other pictures—for me, for Miriam, for Benjamin, for Andrew—and had covered several surfaces with little strips of sticky notes from a stationary set Andrew'd picked up for her when he was in DC a couple of years ago.

It was awesome. I don't think she understands how helpful she was but she was so helpful.

I checked my phone messages and found one from the lost and found saying that they have my book. I was thrilled (even though it was too late to send Andrew over there to retrieve it) and I hopped onto facebook to tell my mom that I didn't entirely lose the book after all and up popped a picture of homemade pretzels that my friend Kathleen had posted.

"What are those?!" Rachel asked.

"But they're huge!" Rachel said.

"Well, they're homemade pretzels, not the little crunchy kind you buy in the store!"

"Homemade pretzels?" Rachel asked. "Can we do that?"

Miriam wandered in just as Rachel and I were getting all the ingredients ready so we all worked together to make homemade pretzels. We whipped up the dough and then let it sit while we ate last night's leftovers for dinner.

Here are the girls taking turns kneading the dough (they actually did the bulk of the work with these pretzels because Benjamin was a a screaming maniac this evening): 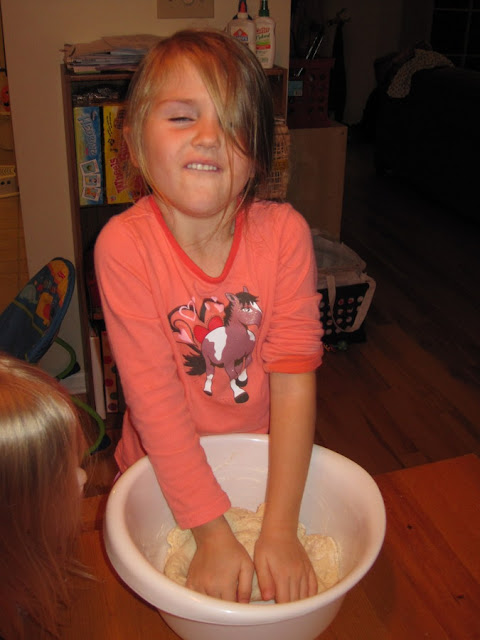 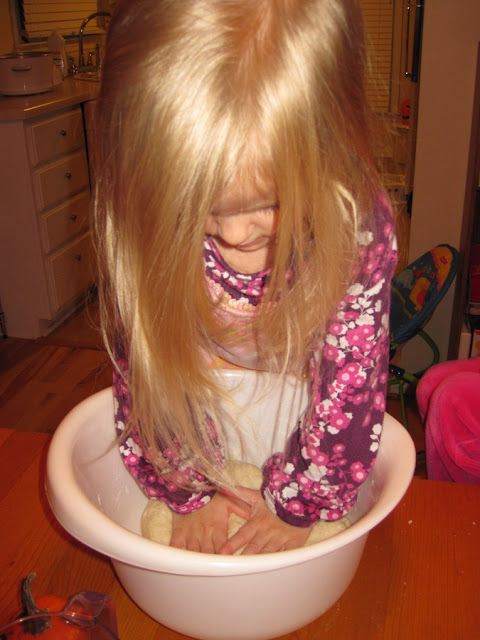 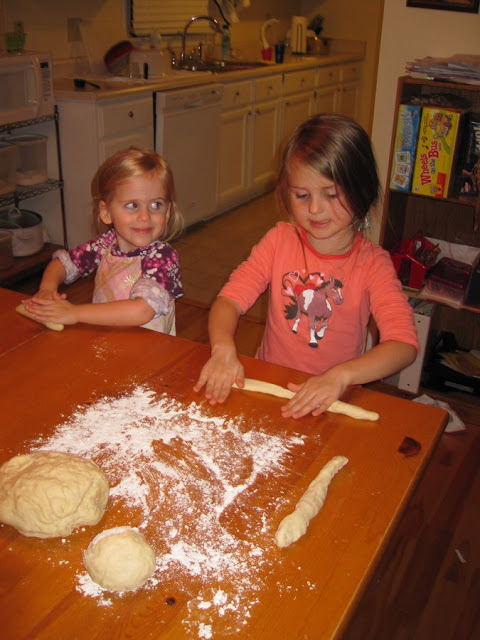 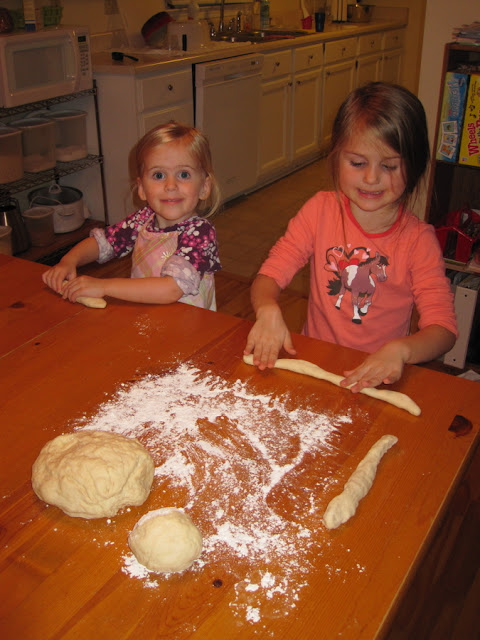 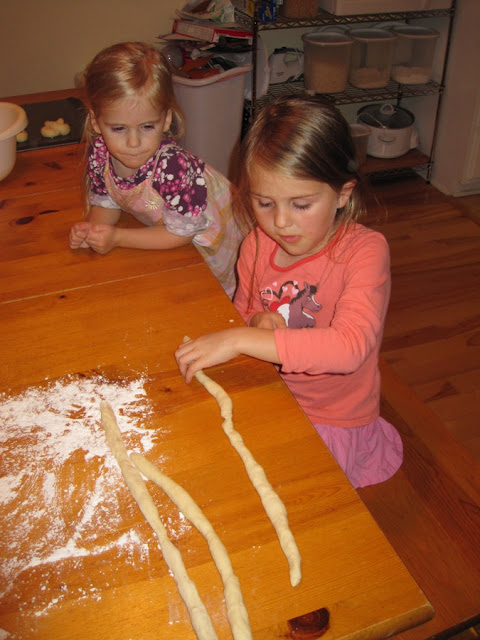 While we worked we talked about Remembrance Day some more and recited In Flander's Field over and over again. Mostly I was reciting it, but I kept pausing so the girls could fill in the blank. I think they're beginning to love that poem, as any good Canadian child should. We talked about the meaning of the poem—about poppies and soldiers and larks and torches but mostly poppies.

"There are poppies on the Wizard of Oz—that's fiction. So are poppies even real?" Rachel wanted to know.

They are indeed real. And they do indeed grow between the crosses row on row. And they have little black seeds and, wouldn't you know it! We have a huge bottle of them in our spice cabinet. I got them out and the girls sprinkled poppy seeds on some of the pretzels, as well as salt. 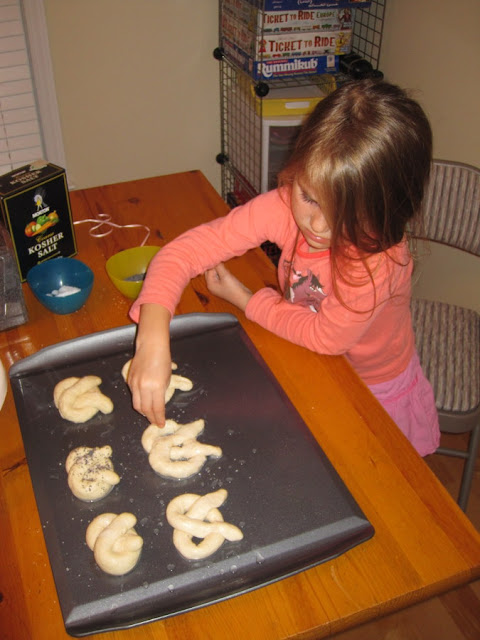 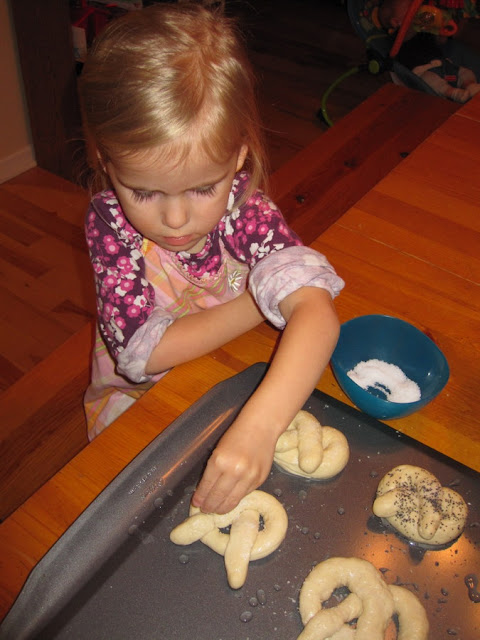 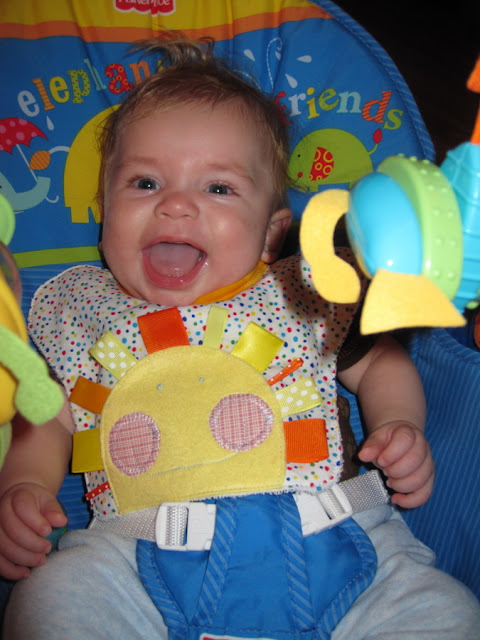 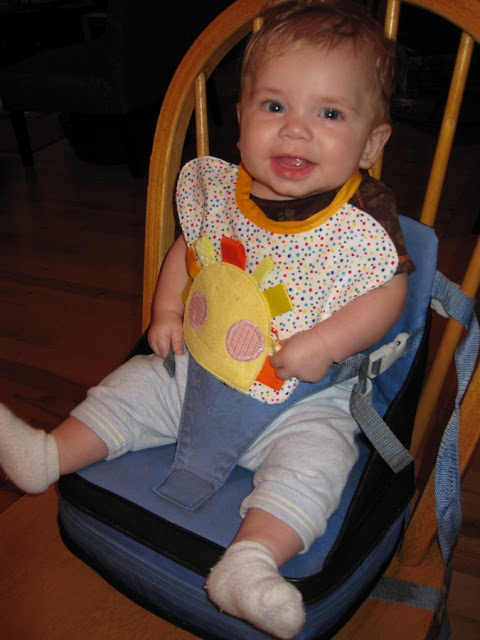 Poor baby woke up from his late afternoon nap wanting to go back to bed but not being quite tired enough to fall asleep (though he was in bed by nine o'clock tonight which is like some kind of a record for him).

It was on round two of pretzel forming that Rachel discovered that if she made a short snake and then grabbed either end of the snake and twirled it around and around while pulling ever so slightly that her short, fat snake would magically morph into a long, thin snake. She's brilliant. 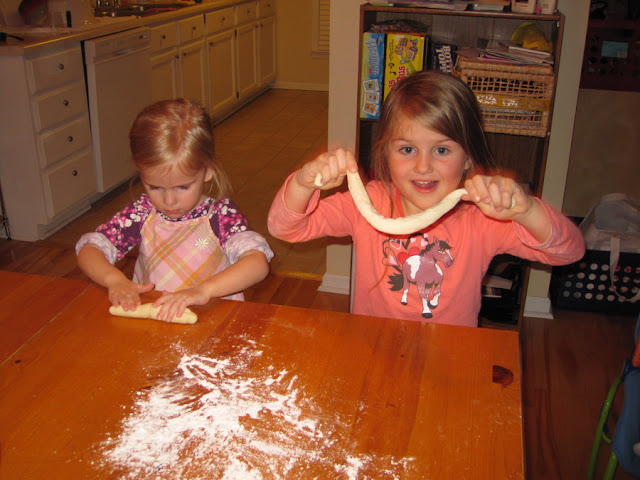 We finished up with our pretzel baking right before it was time to get ready for bed, so the girls got to enjoy a pretzel for dessert. I'm not sure pretzels qualify as "dessert" but my children decided that they did tonight. 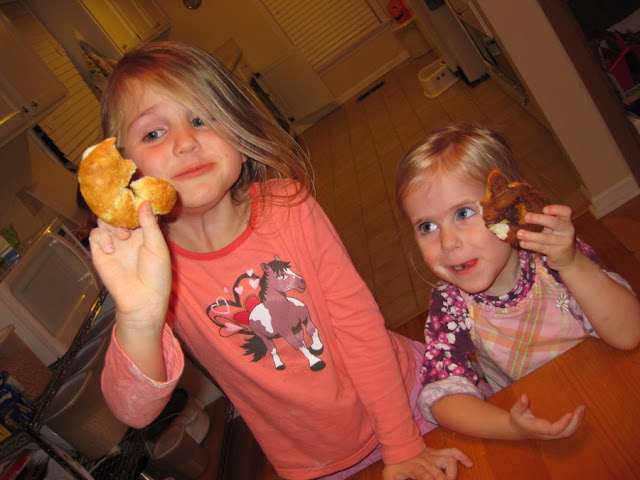 They were pretty proud of their hard work! 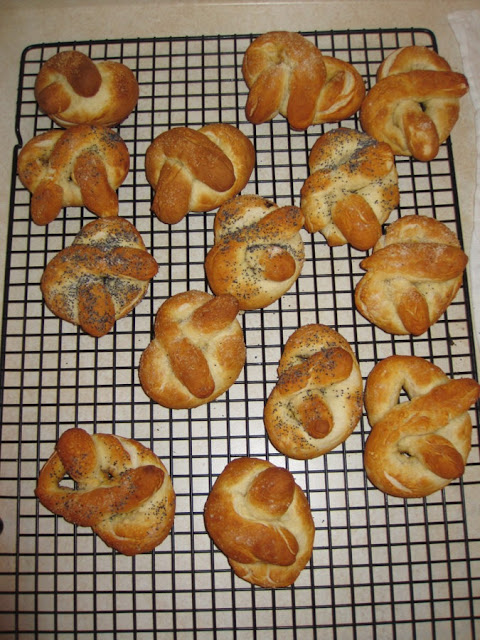 Whenever we do anything like this they like to pretend that they're in the Ingalls family, forging their way through life on the American prairie. Baking pretzels. Folding laundry. Mopping floors. Raking leaves. Pretty much any household chore, yard work, or kitchen task thows them into an imaginary pioneer land. And I'm totally okay with that.
Posted by Nancy at 11:57 PM