Last week a friend sent an email announcing she had a little slide that she wanted to get rid of. I happened to be nursing Benjamin in my rocking chair (which doubles as my "office" chair) and heard my email ding. It took maybe a nano second for me to write back to her, claiming the slide.

I thought it would make a great Christmas surprise and my plan was to get it from my friend on the sly and hide it in the shed until the big day.

But on Monday night while the girls and I were eating dinner there was a knock on the door.

"Just keep eating your dinner," I told the girls. "I'll get it."

In child-ese that translates roughly as, "C'mon, guys! Follow me to the door and then push your way outside to see who/what it is!"

I peeked through the peephole and saw a cute pregnant lady standing next to a slide (instead of the masked madman the paranoid side of me sometimes expects) so I opened the door a crack to tell her that I was going to keep the slide a surprise. Somehow my two little girls managed to wedge themselves  outside and started jumping up and down with excitement.

I thanked my friend and then ushered the girls back inside wondering how on earth I was going to salvage the surprise I'd been planning for Christmas.

"Maybe they'll just forget about it..." I wrote in a hopeful IM to Andrew (who currently only has one late night Monday class left this semester (we're not talking about next semester)), but I forgot about object permanence.


We just can't pull the wool over Rachel's eyes like we used to. Her brain is too developed for that.

I think my "Heh, heh, heh. What slide?" almost worked on Miriam. I could see her trying to remember if there had ever been a slide at all. She screwed up her face in concentration and then shrugged her shoulders, agreeing with me that a slide on the front porch is totally something she'd conjure up in her imagination.

Alas, Rachel knew her mind wasn't playing tricks on her. There was a slide on the front porch! This could only mean one thing.

I hadn't even heard of the Thanksgiving Turkey before that very moment but I knew for sure we wouldn't be able to undo Rachel's knowledge of the slide or quell her excitement about it.

The slide was now officially The Thanksgiving Slide.

Here are a few pictures of the kids enjoying it in the early hours of a beautiful Thanksgiving afternoon before we left to have dinner with some friends (though I'm not sure Benjamin is enjoying it quite as much as his sisters): 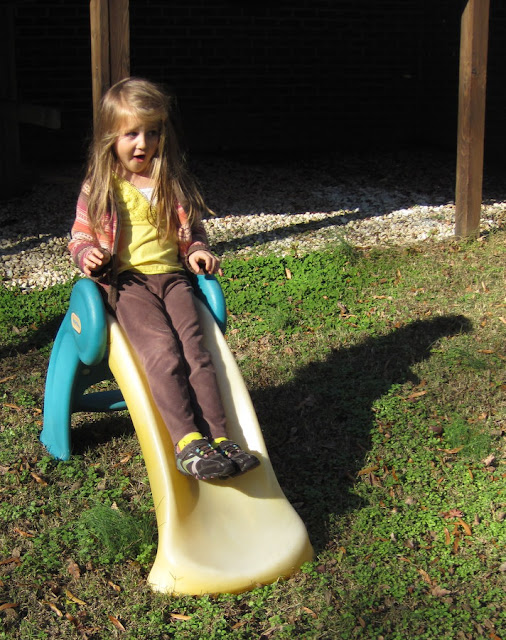 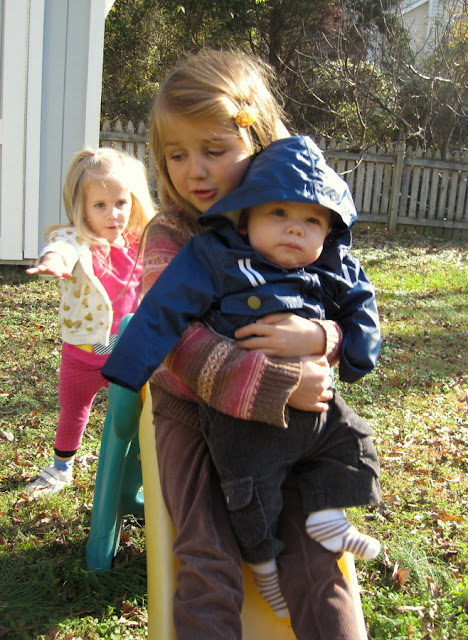 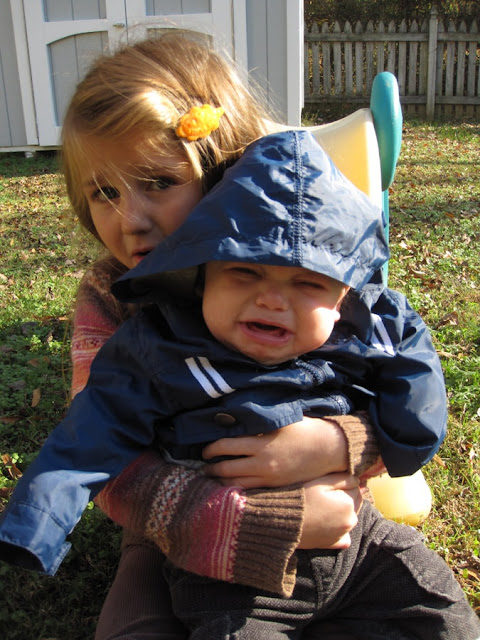 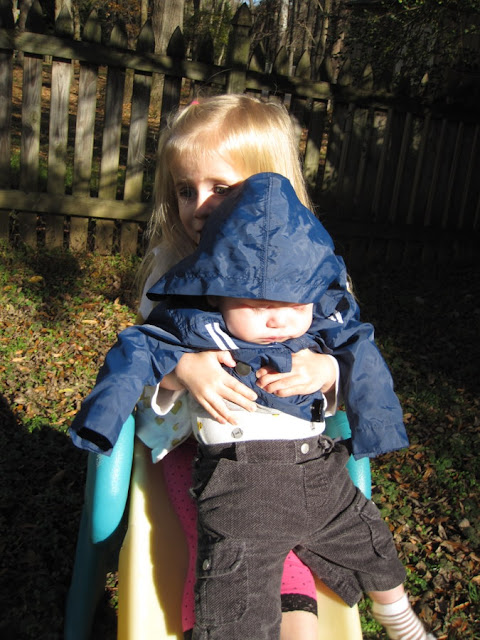 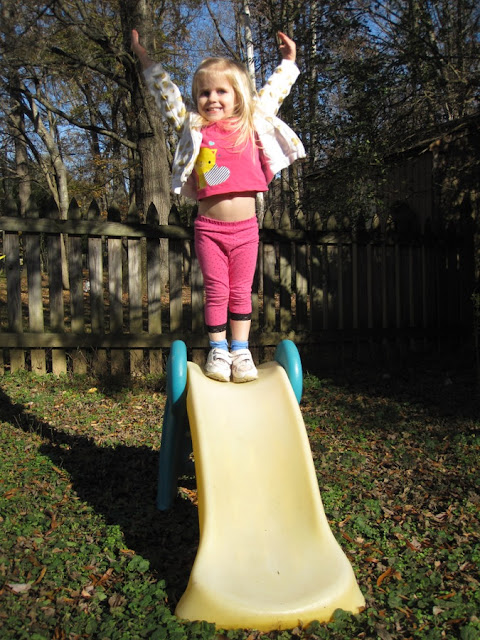 There's nothing better than going down the slide train-style! 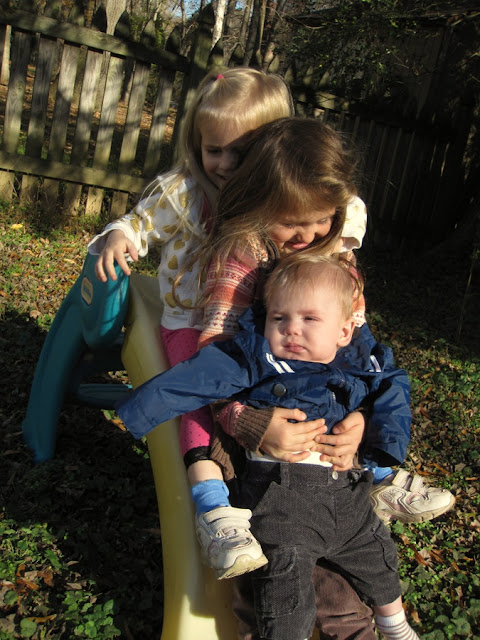 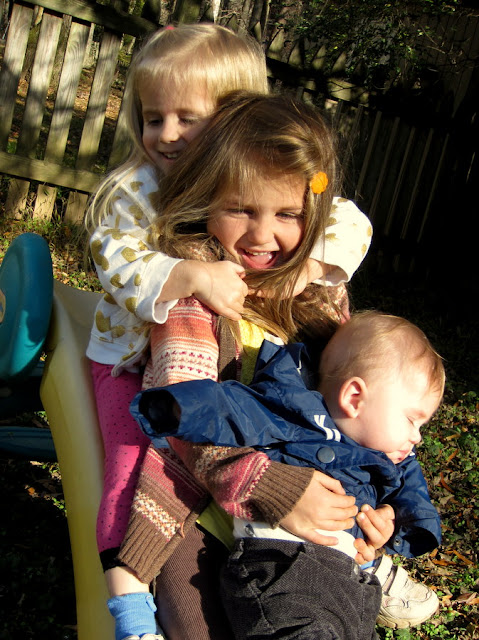 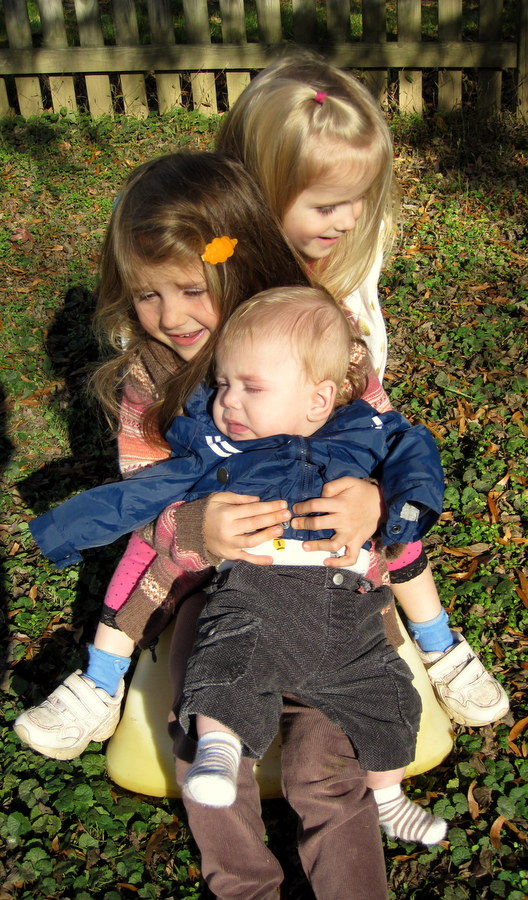 Our backyard is just that much funner now. 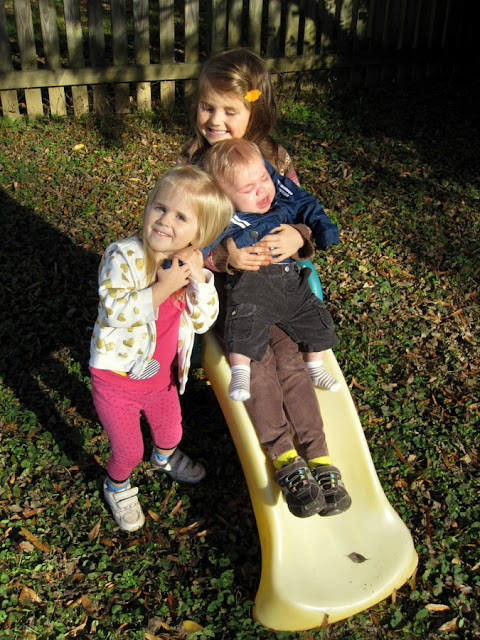