Andrew and I spent Christmas Eve at my parent's house. It was really fun to be with my brothers and sisters, including Kelli and her kids. We only had the three oldest (Rosie, Matthew, and Andrew) for about an hour before they went to their dad's house so we had to be quick!

Andrew and I got there about an hour before Kelli and her children arrived so we all headed downstairs to tryout Patrick's new Dance Dance Revolution pads. Now that there are four pads, four of us can play at a time. The only problem is that our TV is really old so only two sets of arrows show up when there should be four. Oh well. It was really fun anyway.

Patrick and Andrew battle it out on DDR 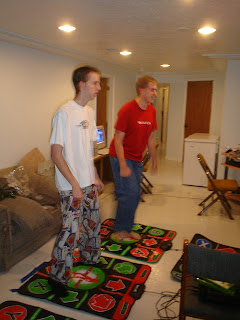 When Kelli's kids arrived, we decided to take a family picture of them while they were all in their nice new Christmas clothes. The twins were dressed up in these ridiculously flouncy dresses. They are already wearing clothes sized for 18 months so we figured if they were walking they might not be considered ridiculously flouncy but since they are only crawling...they were simply infuriating the twins. By the time we got around to taking the family photo Matthew had already changed out of his Sunday clothes. 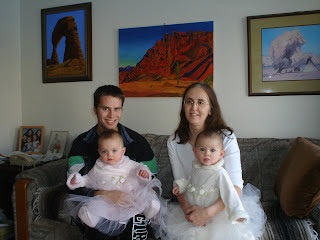 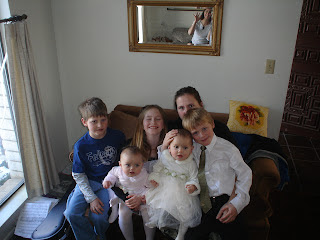 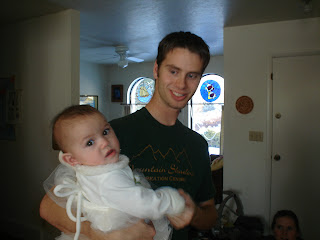 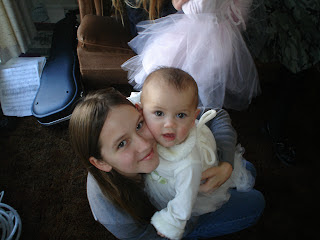 After getting a few decent pictures, we decided we should open presents with Rosie, Matthew, and Andrew before their dad came to pick them up.
Rosie excited to get her presents 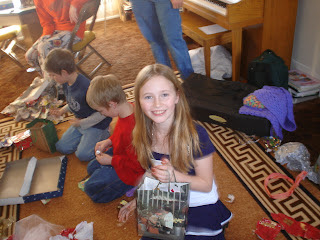 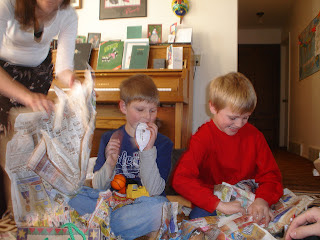 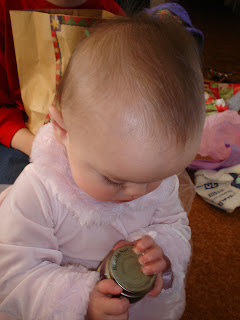 We also opened presents from them. Patrick was super excited about his new Vancouver, BC shirt, while David busied himself passing out presents. 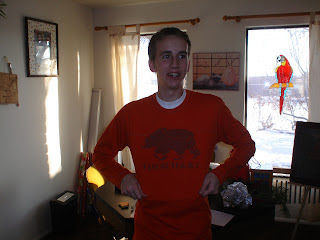 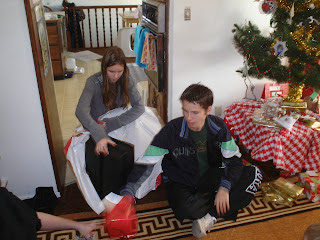 Josie also opened up her present from Andrew and I. We gave her a CD holder, which she wasn't too excited about except that we had wrapped a CD and taped it to the front of the CD holder as a card. That saved her Christmas. She had a list on Amazon.com of all these CDs and DVDs that she wanted and although she got most of them, they were all wrapped in disguise so that she couldn't tell that they were CDs and DVDs. When she saw our present she was like, "Christmas won't be so bad after all."

Dad woke up from his Christmas Eve nap shortly before the boys and Rose left. I'm surprised he slept through all the noise we made. 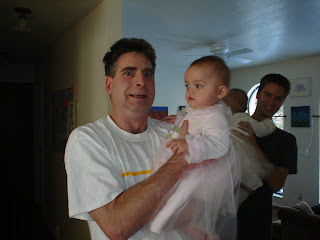 While Matthew was holding Sabrina, she peed through her diaper and dress and tights and onto his foot. He was not too happy about it, but the twins were. They got put into some much more sensible outfits!

Me and the twins in their Christmas outfits 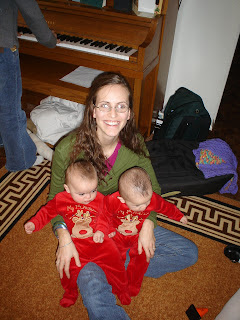 The rest of the evening was spent trying to get the twins to fall asleep so that we could have some more grown-up fun. Did I say twins? I meant Sabrina. It was really just Sabrina who wouldn't fall asleep. Olivia didn't last past 6:00--she had too much fun by dinner time.

Olivia in her high chair, sleeping 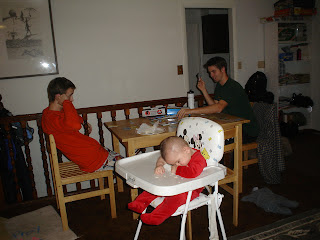 Sabrina was a little more difficult. We put her in the walker to tire her out, but to no avail.

Sabrina in the walker 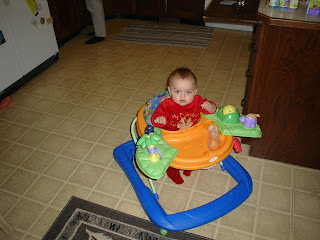 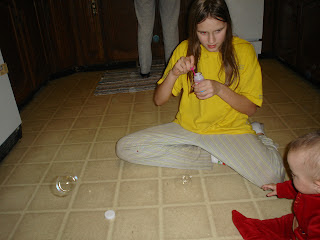 We gave her a bottle but she refused to lay down. Instead she crawled all around the house, drinking away.

Crawling with her bottle 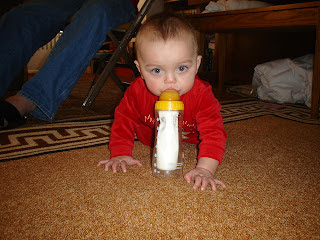 We cuddled and coddled her but she didn't even doze off. 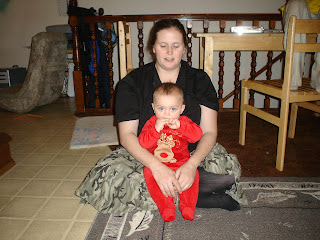 Finally we put her and the playpen in a dark room and let her cry herself to sleep. Just when she settled in for the night, guess who woke up? Olivia.

It was okay though becuase she was happy enough to be held for a few minutes before she fell asleep and could be laid down again. We then told funny stories about each other until late into the evening.

When Josie was getting a little too cooky...

Orange you glad she's not really a pirate? 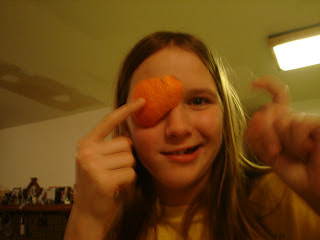 ...Andrew and I decided to head home and get ready for Santa to come.
Posted by Nancy at 12:54 PM