We woke up early on Wednesday morning, courtesy of Mr. Sun. He comes up way too early, a fact that we can ignore in the relative comfort of our own apartment since our building, like most in Cairo, has shutters over the windows so only a minimal amount of sunlight can get through.

It still gets light in the morning, but there’s definitely no light streaming through the windows, either.

Since we were up, we decided to just head straight to the beach. We made a big lunch, soaked ourselves in sunscreen again, and headed out to the beach.

No buses were coming around to pick people up. Instead they were waiting at the beach to bring people back home, which is really convenient at 5 PM, but not so convenient at 9 AM.

We walked to the beach both days—a long and hot walk. It takes us longer than a half hour to get to the beach, but I guess it’s worth it in the end.

The tide was still in when we got there and the water still was pretty warm, which was nice. We found some more “wild life” including a starfish and some mollusks. We kept the starfish for a while, but Rachel found it too boring, so we put it back. 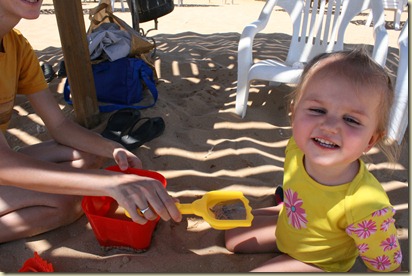 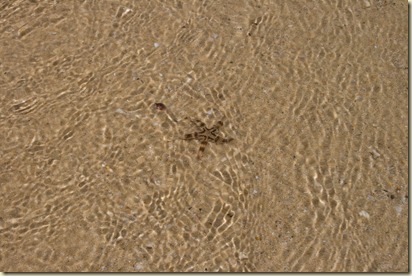 We kept the mollusks for longer since we could dig them up and watch them bury themselves over and over again. That was much more entertaining than a boring, old starfish. 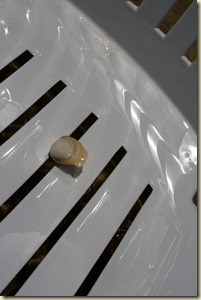 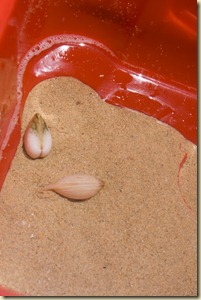 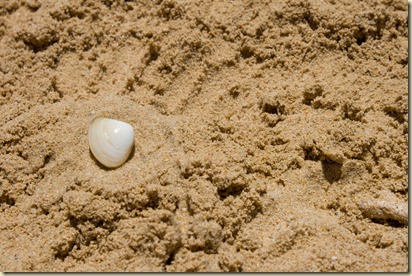 We were able to find several mollusks because we spent most of the morning sitting in beach chairs that we had moved into the water. The tide was going out and was stirring up a lot of shells, several of them still containing living things. The living things went into Rachel’s bucket, the non-living things went to Rachel. 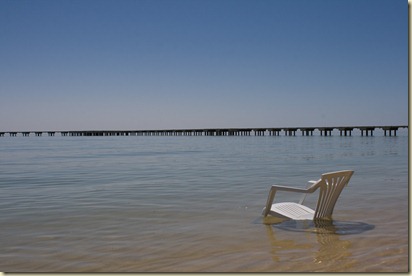 Big, flat shells were plates and bowls. Coral were sticks and spoons. Round rocks and shells were food, usually apples. She had a great time pretending to eat various shells and rocks, while sitting on the chair in the water. The chair was keeping her safe from jelly beans and fish, while still letting the waves splash her to keep her cool. 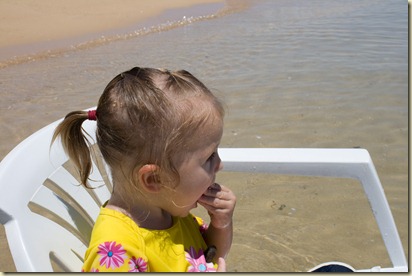 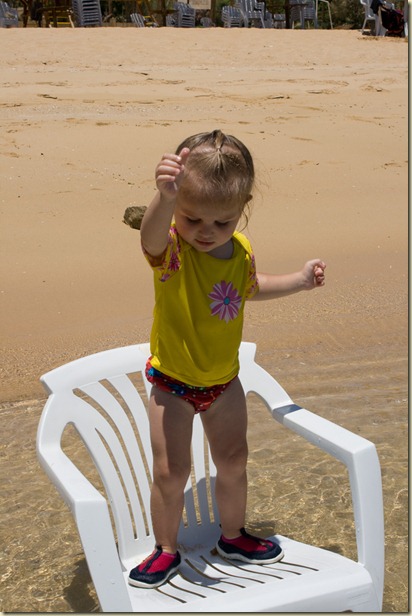 Before lunch we did some digging and built some more castles and sand. Rachel started doing this ridiculous pose where every time I would ask her to smile she’d first lie down on her tummy and then grin like a banshee. Lucky for her almost everything she does at this age is cute. 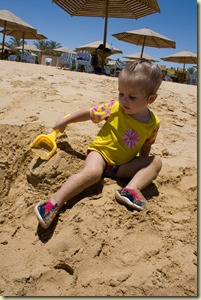 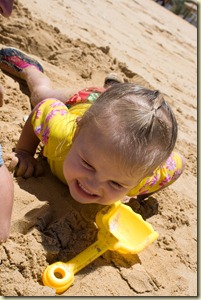 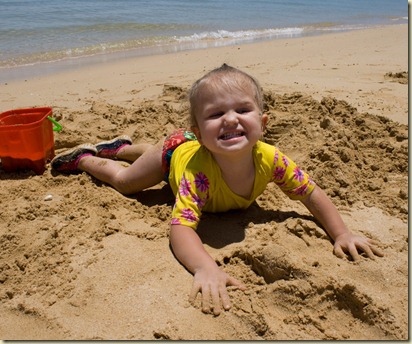 By early afternoon the tide had gone out far, far away again and we had to walk quite a ways out to get to any water. Rachel wasn’t very happy about all the crabs. They dig holes to hide in an instead of making piles of sand (like ants do), the crabs make little balls of sand and toss them to the side while they work. 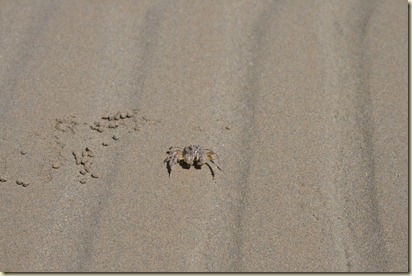 This means that the beach is covered with crabs, holes, and balls of sand. The balls of sand are what tipped Rachel’s scales. She insisted they were balls of “poo-poo” and didn’t want to stand anywhere there were remnants of crab-digging, which was pretty much everywhere. 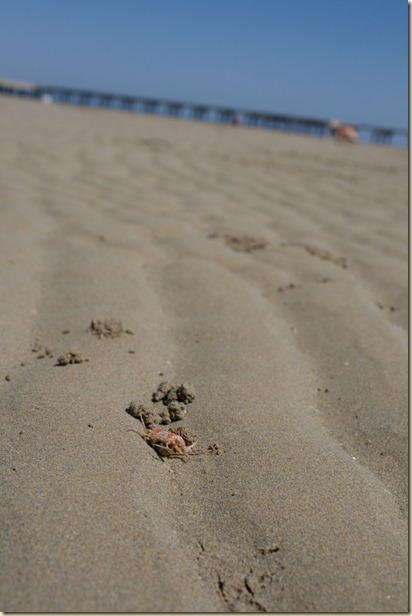 Eventually she forgot about the “mean tuwabs” (they weren’t about to pick on Rachel—they were the size of her big toe), relaxed and really got into mud-flinging and mosque-building again. 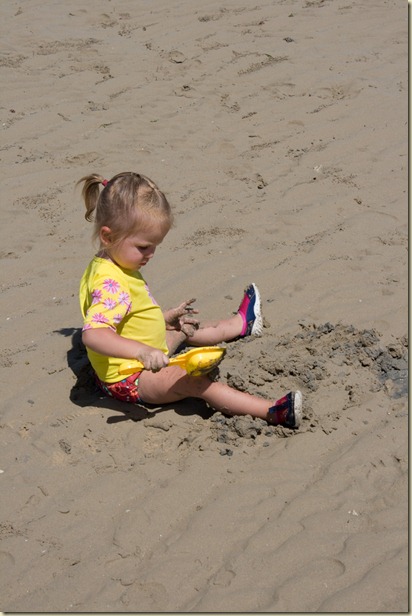 She even almost voluntarily got into the water by herself, but only because I had decided to walk all the way out to the “deep” water (meaning it was at least up to my knees) so that I could cool off a bit more and Rachel wanted to follow me. She could only go so far before she froze in fright and started screaming for me to come back. 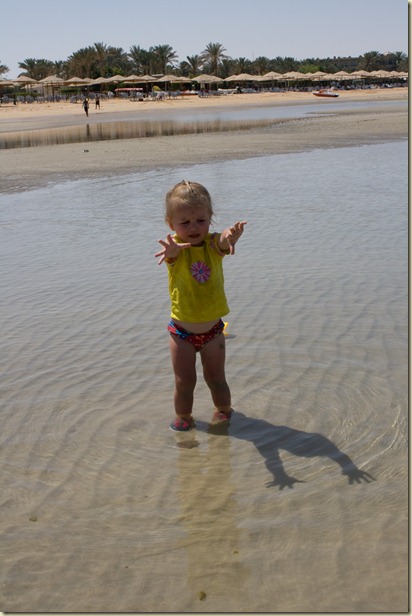 So I did, because I’m a nice mom like that. Rachel stumbled across the very same sand dollar that we had found the day before, which we thought was a little weird. I wonder if we accidentally killed it by using it as a shovel the day before (and by “we” I mean Rachel) or if it was already dead. Either way, Rachel was happy to have her “money” back. 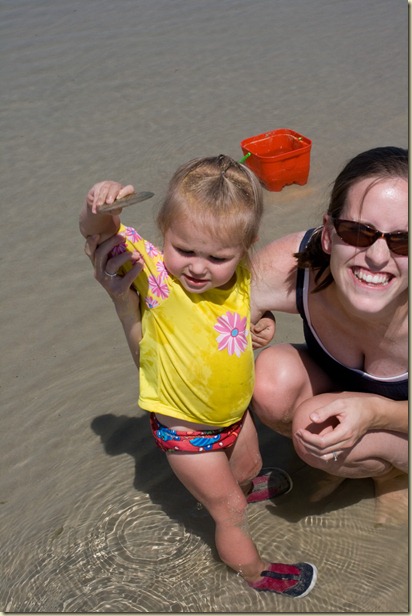 When we were all hot, sunburned, and exhausted, we decided to call it a day. We released our mollusks back into the wild and went back to the condo. We had been at the beach for over 6 hours and Rachel was so tuckered out that she suggested having a nap! 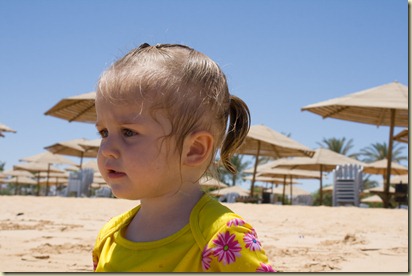 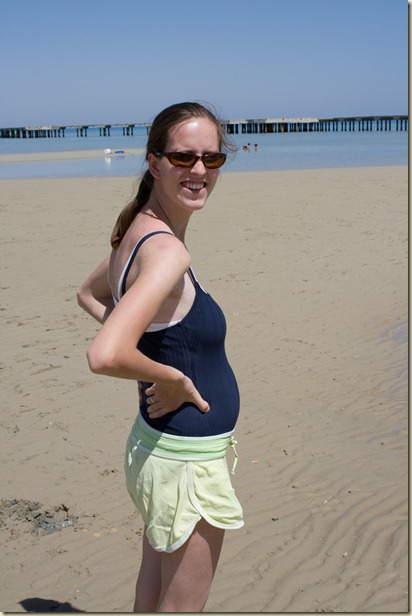 I think our mollusk looked very happy to be going home. Rachel, on the other hand, just looks tired. 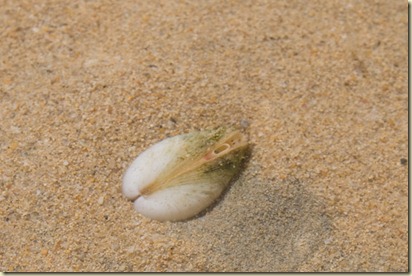 After napping and dinner, we went to explore the pools in the neighbourhood. Andrew asked a security guard about them and apparently we can use any pool we want. Unfortunately it was a rather cool and windy evening; Andrew was the only one brave enough to get in the pool, although the next day we all got in. We were still too tired and sunburned from the day before to fathom walking all the way to the beach just to repeat the day. The pool is just a short walk away, so we spent our last day relaxing at the condo and playing in the pool, which was just nice. 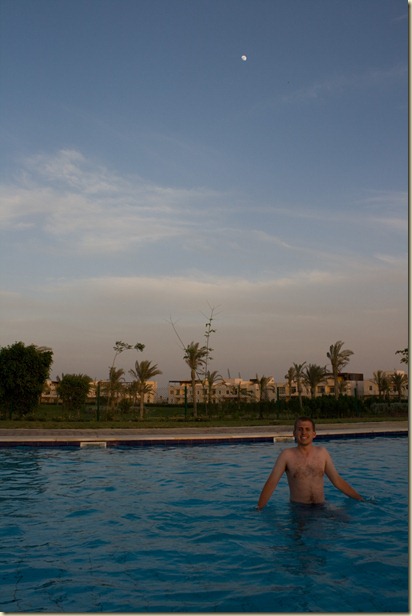 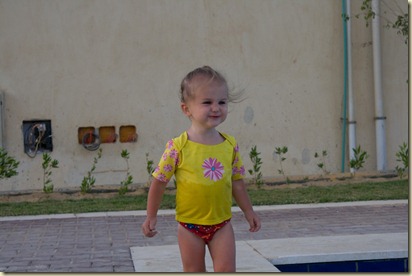