Mostly I just stay inside all day. It’s hot and the thought of going anywhere with Rachel recently makes me more tired than I already am. So we usually only go out when Daddy’s home. People don’t stare as much when we go out with him, anyway, so I feel more comfortable.

It’s not that I never go anywhere by myself, like tomorrow there’s a Relief Society breakfast and I’m planning on going to that, it’s just that if I have to go somewhere I’d rather go with Andrew, especially if I have to take Rachel. She’s heavy and my hips have somehow been swallowed by my belly so there isn’t anywhere for her to sit.

Today I suggested, though, that we go for a family walk. We haven’t done that in a long time because Cairo isn’t really set up for casual strolling, not really. But I just thought it might calm Miriam down.

For exercise all we do is yoga and run around the apartment, Rachel and I. And I think that works for our current situation.

But seriously, I thought walking would put Miriam to sleep. It didn’t. But we did see some interesting things.

Oddly enough we’ve never walked that way. Mostly it’s because there isn’t really anything there for “expats.” After crossing Road 87 there are a few more nice-looking apartment buildings. A friendly expat couple saw our little family walking and they hollered and waved to us from their balcony. They wanted Rachel to wave to them, but she wouldn’t. My guess is that they miss their own grandchildren…

Not too long past those nice-looking buildings, though, things begin to get squished by ramps leading to and from the autostrade. The overpass carrying the autostrade traffic acts almost like a portal to another dimension.

Once you cross that, you are no longer in Maadi. The expat world is a memory and you have entered “real” Cairo.

Truthfully, it’s quite friendly. It’s quieter than Maadi and seemed more like a neighbourhood than anything I’ve seen recently. Rachel spent the whole time on Andrew’s shoulders chanting “neighbourhood.” She likes to repeat new words.

Children were playing in the street with balls and kites. Little babies were running around being chased by unveiled girls (inevitably they were baby-borrowers) while the veiled women stood around and chatted. Older boys lounged around parked cars, probably dreaming of driving one day, while their fathers sat airing out on balconies, wearing nothing but their underclothes while smoking hubbly-bubbly and drinking tea.

The alleys between the buildings were unlandscaped. Trash was heaped up all along the side; youths used these areas as makeshift soccer fields, kicking empty soda pop bottles around.

Cars here actually drive cautiously, probably because if they hit someone it could very well be their own child or neighbour. They don’t seem to take the risks the taxis take in Maadi (or anywhere else in Cairo, for that matter).

Everyone looked so comfortable, relaxed, and happy that I almost wanted to look for a vacant apartment to rent. Almost, but not quite. 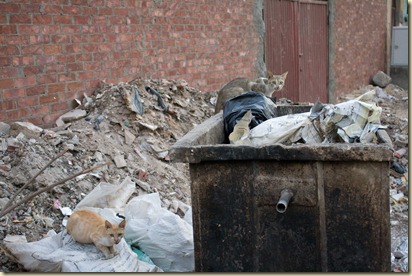 I had to remember that we have stray cat, stray dog, rat, cockroach, and ant problems in our neighbourhood and we don’t have trash insulating the first foot (or 5) of our apartment building. Sanitation is not a skill that Cairo has fine-tuned. Maadi is cleaner than Tora, but it was still nice to see regular, happy people out and about on a Friday evening.

Unfortunately we have no pictures from that part of our walk because I wasn’t brave enough to take out my camera. I’m a little camera-shy. People here eye me suspiciously, anyway, but when I have our big camera out they start to look really nervous and that makes me feel nervous, too. We’ve been asked more than once if we’re spies.

When we found a bridge going over the metro near the Torat al-Balad station, we got excited because we found the metro parking lot. I don’t know why we found that so exciting, but we did. Aren’t those usually at the end of the line, though? This one is kind of in the middle of the line, which we thought was weird. 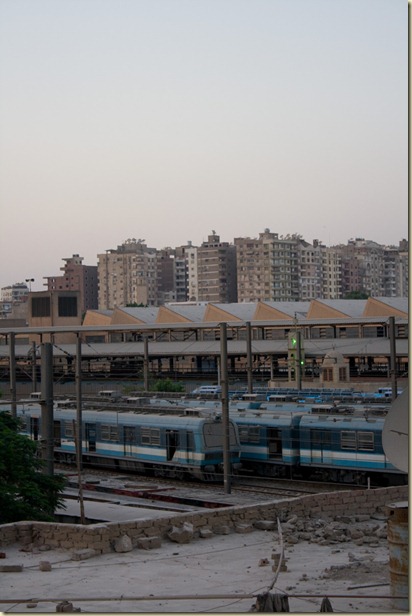 Maybe the reason we actually got excited is because Andrew asked someone where we were and we finally learned we were in Tora. 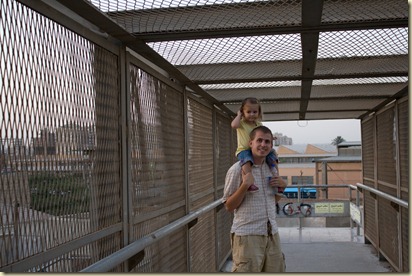 While we were standing on the pedestrian bridge, admiring the view and the beginnings of a sunset, we heard the most beautiful adhan we had ever heard. The muezzin had the most beautiful voice and created a tantalizing melody that magically danced around the sky scrapers and made it to our ears unharrassed by either speaker-crackling or car-honking. It was so beautiful that Rachel hardly recognized it as a call to prayer at all. 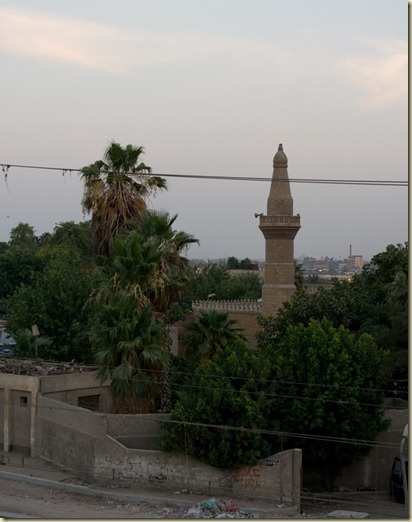 When a raspy, grinding muezzin burst out chanting the adhan slowly and drowsily (and cutting off the other muezzin's beautiful voice) as if he were bored to tears, she immediately recognized it and folded her arms.

We finished crossing the bridge and continued wandering through Tora. The residential and commercial blended entirely. It was busier here than the quiet neighbourhood we had just passed, but families were still out socializing and working together.

We passed a few colorfully decorated shops. I saw more tea and shisha shops on this strip of road than I’ve possibly ever seen in my life. 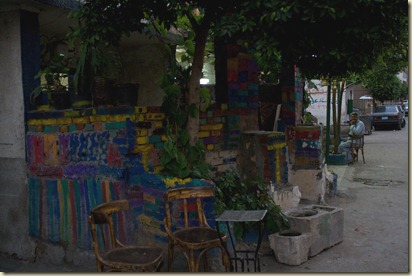 We were happy to see many repair shops around. One of the tires on the jogging stroller is absolutely thrashed. We need a new one—this one is shredded the whole way around and can’t be patched—but haven’t been able to find a bicycle repair shop anywhere.

They have car shops and bike shops and plumbing shops and tea shops and butchers galore. Need a new exhaust pipe? Visit Tora. 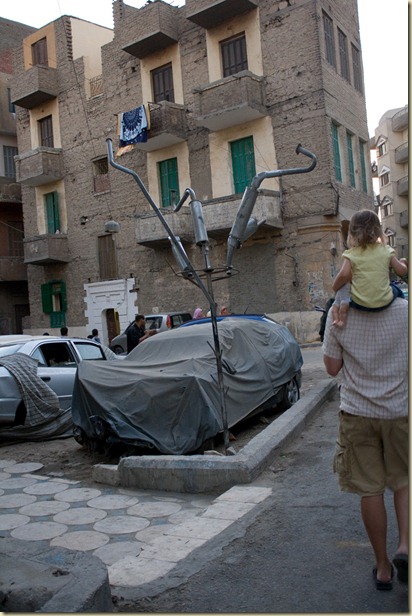 Our landlord actually just stopped by to pick up this month’s rent and Andrew asked him about our bathtub tap. It breaks like every month and is driving us crazy. We’ve had so many plumbers come in that it isn’t even funny.

Hatim looked at it and said it would be a simple fix, that the tap itself was stripped so we just needed a new one.

Andrew said we’d go to Road 9 tomorrow and get one.

“Do you know the neighbourhood Tora?” Hatim asked.

“Actually,” answered Andrew, “We do.”

Apparently Tora is the place to go for home improvement projects small and large. There are plumbing places on Road 9, but prices are much lower in Tora. Part of that might be because the cost of living is cheaper in Tora. How much can you really charge for someone to live or set up shop in a building that is visibly crumbling? 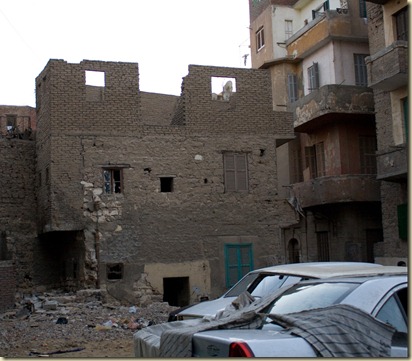 My guess is not very much. Buildings like that are occupied, but probably should be condemned. Here today, pile of rubble tomorrow…

Our apartment is pretty shoddy, truthfully, but it doesn’t look near as bad as the apartments in Tora or other places in the city—where apartment buildings that really do spontaneously collapse.

We were wondering, really, what possessed us to finish crossing that bridge and continue deeper into “real” Cairo, especially when Andrew was dressed in shorts. Perhaps it was a little inspiration because today is the first day anyone has ever asked us if we know the Tora district. We have also been praying to find a bike shop so we could finally fix our poor, beaten up stroller.

(We’re planning on going back tomorrow, but Andrew’s going to wear pants).

Our walk home was interesting since we didn’t really know where we were and only had a general idea of where we were going. We didn’t want to backtrack, so we just kept walking. Soon we found people popping out from behind a little wall. We decided to follow them to see if this was some secret passage back to Maadi (you never know).

There was a well-worn path behind the wall leading down into what I figure used to be a canal but is more of a garbage dump now. 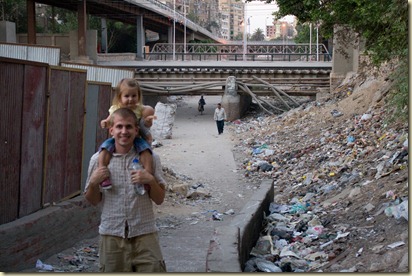 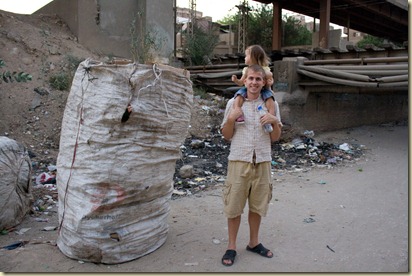 We kept following people and came to a strange bridge. Everyone was walking under it, so we did, too. 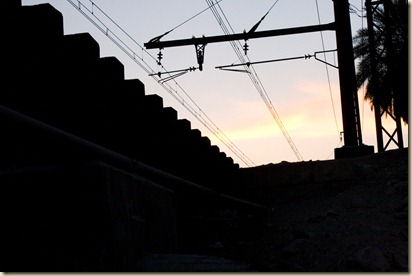 When I looked up, I noticed train tracks. We didn’t even realize that we had crossed directly under the metro—and I mean we had to hunch over, we were so directly under it—until it started whizzing past us. It was a bit of a surprise; we were just happy that we had cleared the tracks before the train came or we would have been really shocked! 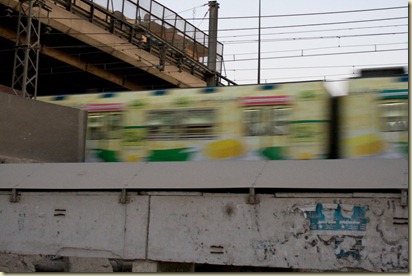 Lo and behold, after we had crossed under the bridge and walked up the embankment of the has-been canal, we found ourselves back in Maadi. The difference was plainly stark. Before we weren’t in Maadi. Now we obviously were.

Even Rachel knew we were back in Maadi. Maadi is kind of an oasis in Cairo.

“Ooh, Maadi!” she exclaimed when we came up on the other side.

We weren’t exactly sure where we were at first. My guess was Road 9, but Andrew didn’t agree with me…at first. Turns out I was right, which was exciting because I am so rarely right about these things. I think I’ve spent half my life being lost and wondering where I am.

It was nice to know for sure (for once). Even then I wasn’t 100% positive on our exact location until we came to the bus stop (where Andrew is in habit of getting hit) and saw the lights of the Sakanat al-Maadi mosque glowing a soft green and silhouetting bats diving gracefully after mosquitoes. 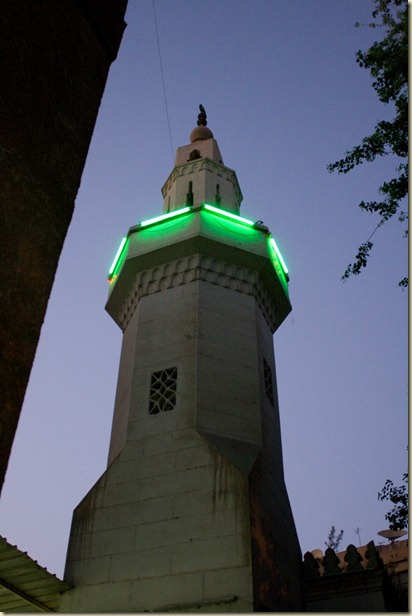 “Home!” said Rachel when she saw the mosque.

It was already past her bedtime and she kept nodding off and banging her face on Andrew’s head. She was ready to climb into the comfort of her own bed.

It’s almost funny to me that this mosque represents “almost home” to Rachel. I’ve had many “almost home” markers in my life. The “Happy Face Barn,” the Great Canadian Superstore, the canal before Nighthawk drive, Target, Costco, and many others…but never a mosque. Until now, I guess.