Raised in a barn

When I was in grade four we moved away from Port Coquitlam, British Columbia—a city kind of swallowed up by Vancouver, which happens to be the largest city in British Columbia and all of Western Canada. PoCo is still it’s own little entity, but we would always tell people not from the area that we were from Vancouver.

We moved to Calgary, Alberta—the biggest city in Alberta—and lived there for the rest of the school year (January through June), through the summer, and into the next school year.

My mom, however, had gotten a job working for the Foothills School Division in the IMC, the Instructional Materials Center, a sort of warehouse/library for the books, movies, PE equipment, and other goods that circulated around the schools in the division. The IMC happened to be located in the town of High River, Alberta—a small town not swallowed up by a big city.

High River had two public elementary schools back then—I believe they still do (the others are Catholic)—and since we hadn’t moved and didn’t know where we would be moving to, the zoning rules didn’t really apply to us so we basically got to handpick our school.

David had to go to Joe Clark because that’s where the middle school was that year (until they opened up Senator Riley the next year). Patrick and I preferred Spitzee, though, so we went there.

We did end up moving to High River eventually, but until we did we had to get up early and commute from Calgary to High River every morning. After school we’d hang out at friends’ houses or “help” out at Mom’s work until it was time to make the commute back to Calgary.

This only lasted until October sometime, so it wasn’t as if we were doing it for months. Still, the weeks we made the commute were long and tiring.

One morning while making the drive from the City through the prairie to the town we noticed that some cows had broken their way through a fence somewhere and were curiously surrounding a farmhouse, peeping in windows and exploring flower beds.

I remember finding this very entertaining. We all laughed about it, joking about what the cows were thinking while they were looking through the windows.

Cows belong in pastures, not front yards, or so I thought. But my formative years turned me into quite the city slicker.

Now I know that in North America farm animals can be found in the city. But usually there is a farm-like area for the animals to roam. Barns and pastures and fences, things like that. Things that keep the animals separated from traffic, from people, from the city.

Even in Russia, it is common to have farm animals around. To get to the Slinkov’s you had to walk through a large quasi-communal yard full of chicken coops and things like that.

But that’s my point, I guess. The chickens were in coops. They could be let out to stroll around the yard, but most of the time they spent locked up. There are no horses roaming free around Orem, that I know of. They’re all corralled up.

That is not how it is here. Here the animals and humans share habitat.

I read in Rodenbeck’s Cairo book that people sleep with boxes of pigeons under their beds. They keep goats in the corner. They keep chickens in the kitchen. During the day the animals go outside and mill around, eating what they can find, creating traffic hazards, and providing endless entertainment for Rachel. Perhaps one of the reasons Bird Flu is spreading so well in Egypt is because people sleep with pigeons under their beds and keep chickens in their kitchen. Just a guess.

Anyway, Rachel was so excited when we went to Tora today and saw some goats out in the road. 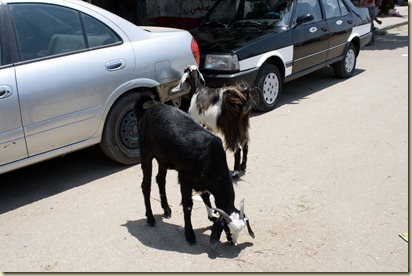 We walked right by them and she was definitely interested in everything about them. She told us everything they were doing with passionate little squeals—not that the goats were doing anything exciting, unless you find walking and eating exciting. I thought for sure she would be terrified because the last time I took her to a zoo (over a year ago) she was more scared than interested…and she’s afraid of cats and dogs and everything. Perhaps this is a sign that taking her to the zoo won’t be such a waste of time anymore.

One little goat was picking though a pile of trash and found a piece of newspaper to nibble on. I have also seen cows staked to the side of the road, rummaging through garbage to find things to eat. That is one of the many reasons we try to stay away from meat here. 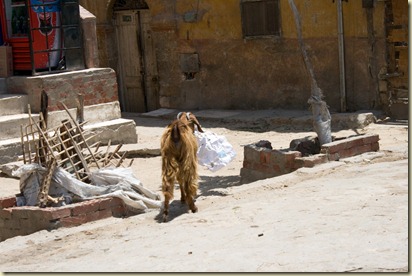 I find it interesting that pigs are still considered “unclean” in Islam—most often the reasoning that I hear for this is because pigs eat refuse so why on earth would we want to eat them. That is a good argument when you consider that the refuse the pigs picked through (or used to, before the government decided to kill them all) contains not only apple cores, corn cobs, and banana peels, but empty gasoline containers, animal carcasses, and old tires.

Slop, to me, is entirely different from plain, old garbage. Slop is basically compost for pigs—it’s organic and actually food. Garbage contains all that, sure, but also things that should probably never be eaten by anyone or anything, even accidentally.

Pigs aren’t the only ones here eating garbage, though. The goats and cows definitely do—I’ve seen it with my own eyes—and yet, the people still drink their milk and eat their meat without thinking of them as being unclean at all.

Fortunately, or not, there aren’t any pigs left in Cairo, so we don’t have to worry about that. It’s a little ridiculous that they were slaughtered since pigs weren’t exactly the cause of “Swine Flu.”

We were joking with the Lewises and Houses the other day about changing the name of Swine Flu to something more fitting, since that is what people seem to want to do. We thought that maybe “Stray Dog Flu” or “Rat and Cockroach Flu” or something like that would be a great name! Then the Egyptian government would go and kill all the pests around the city. Killing rats and cockroaches would probably help slow the spread of disease (any disease) more than killing all the pigs.

Some animals are luckier than others and get to live in little alleyways between buildings. Before I took this picture I saw a goat walk through the door and into the house. The woman inside didn’t shoo it out. It belonged there. 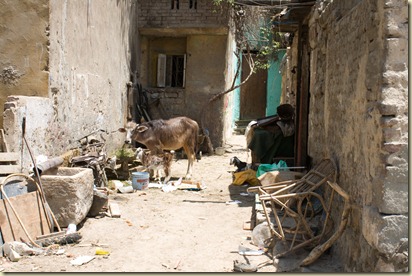 It made me wonder if mothers here ever use the phrase, “Were you raised in a barn?!” when their children are rude and acting like, well, barn animals.

Is it even applicable when you share your dwelling with goats and cows and chickens?

Or do animal mothers ask their children, “Were you raised in an apartment building?!” when they do something polite like wiping their feet on the welcome mat or not eating their owner’s favorite shirt?

Or is that even applicable when you are a goat but sleep in the living room and use the front door? 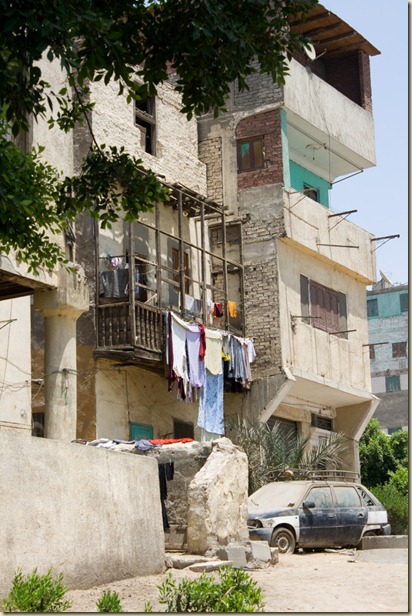