What would you do for some watermelon? 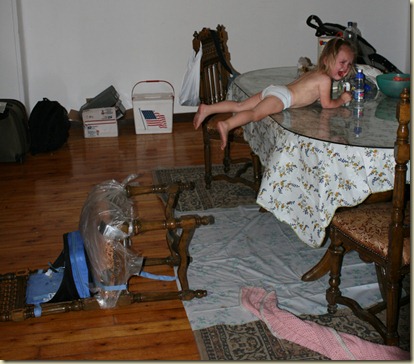 I debated whether I should even bother describing this picture or not.

Truthfully I don’t really know what happened because neither Andrew or I were in the room. I can only tell you what I think happened.

The green bowl on the table is full of watermelon. I had just finished cutting it up and put it on the table. Then I left to go back to the kitchen to help Andrew prepare the rest of lunch. We heard a crash and a scream. I ran out to the dining room and this is what we saw.

Rachel, accompanied by her favorite blanket, decided they wanted to sneak some early lunch. Rachel climbed onto her chair and started reaching for the watermelon. It was too far away, so she kept reaching and reaching until…you can probably guess the rest.

She got stranded on the table and was none too happy about it. I went to go get her down, but Andrew stopped me so that we could take a picture. It was just too funny.

And then, after all that hard work to get to the watermelon, Rachel refused to eat any at lunch. We almost thought she had inherited Andrew’s dislike for watermelon (sometimes it’s like he’s not even human) but today after a long walk in the hot sun, Rachel and I ate the other half of yesterday’s watermelon together. I think it was the trauma of the chair falling over that caused her aversion to watermelon yesterday, which means that she still likes watermelon. (Phew! She’s normal!)