Talking with family and taking medicine

If you're lucky, this may be the last Rachel-story of the day. She's just been so hilarious lately. It's so fun to see what goes on in her little head now that she's talking more. She's always been quite the character, but now her actions have dialogue! 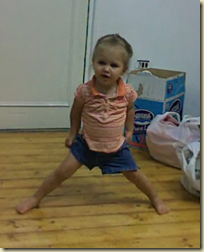 We were talking with our families yesterday. We always talk to them on Sunday mornings since they don't have church until the afternoon this year and we're free Sunday evenings. Sometimes Rachel can't wait until Sunday so we end up calling whoever is available so that she can see a "moosee" (movie) of her family.

Part of it might be that she also get to see a movie of herself while we talk. And she knows that Grandpa Layton will always take pictures of her (like the one of her showing off her splits, above) and send them to her to look at. She likes that!

"TAWT DAMMA!" she'll demand in the middle of playing a game or coloring. We’re pretty sure “tawt” means “talk,” although it’s possible it could mean “call.”

"We can't talk with Grandma right now. Grandma is sleeping."

"Naanii is sleeping, too."

"Josie is sleeping, too."

"Yes, uncle [could be any uncle] is sleeping, too. Everyone is sleeping."

Once she has the idea of calling her grandparents, though, it has to be done eventually because she doesn't forget about things. Ever.

She knows her family, though, for the most part. She knows that in Grandma and Grandpa's house (Andrew's parents) there is an Uncon J-Butt (Uncle Jacob). She knows Auntie Em and Auntie Sara, too. She also knows that in Grandpa and Naanii's house (my parents) there is Josie (she won't call her Auntie for some reason) and an Uncon Pa-chick (Uncle Patrick). She also knows Uncon (Uncle David is only known as Uncon--she won't say David) and Auntie Abbi (and her kids, although I don't think she has all the kids' names memorized).

Sorry to the rest of our family without webcams. We show pictures, but it's just not the same as interacting, I guess, and she hasn't memorized your names.

My favorite name is Uncon J-Butt's. I think we should call him that forever and ever. All in favor?

Anyway, last night when we were talking with my parents, Rachel randomly brought up the topic of medicine. She's been into first aid recently. She's all about band-aids and lotion (which she calls "motion" or just "mosh" for short). I don't know why since she hates band-aids and lotion isn't technically medicinal. Still, she'll come up to us complaining that her knee hurts and that she needs motion, so we'll give her some and she'll lather it all over her legs. Sometimes she'll claim that our legs hurt and then put lotion on for us.

Last night she was listening to us talk, while behaving like a Mexican jumping bean, and all of us a sudden said,

It took me a few times of making her repeat what she had said, but I finally figured out she was saying, "Medicine. Feel better."

That's what I say to her when I give her medicine. "It will help you feel better." The last time we gave her medicine was a few weeks ago when a rock got dropped on her head. We gave her some infant ibuprofen to help the swelling go down. That was 3 weeks ago and she hasn't had medicine since. But she was telling Naanii and Grandpa all about it.

"If you take the right amount, it will," agreed Grandpa.

"We measure the medicine in a cup?" I asked. She nodded.

Then she stuck her finger right in my face.

Apparently her finger magically turned into a pill and I was supposed to eat it to feel better, so I did.

And then she ran off to play Ring-Around-the-Rosie with her chair. The things this girl thinks of…