Rachel's started talking in phrases. I would say that she was talking in complete sentences, but that's not exactly true. There are some phrases, though, that she says so fluently it shocks me.

"Help me up!" is one thing she says, often. It means either "hold me" or "help me up." When she asks to be held she usually says, "Hold it!" instead of "Hold me!" We're still working on pronouns.

"Please bless it," is another thing she can say without pausing to think between each word.

She is starting to string words together, though. Today she said, "Not. Want. It."

Just now she said, "Hand, hand, hand... Trace. Hand." She's attempting to trace her hand but since all she's turning out are circles, she's rather frustrated. She's been coloring a lot lately.

Her coloring has really improved recently. She still mostly colors circles (circles are her specialty) but now she colors circles on specific things. 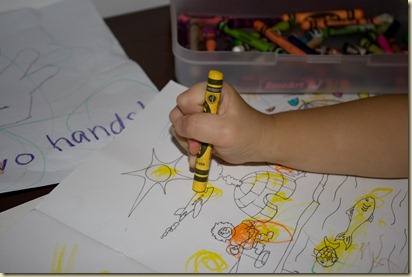 "Color. Shirt. Orange," she'll say, only she mispronounces orange as "oran-sing," so it comes out sounding way cuter. 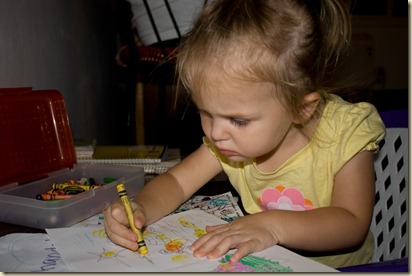 She just started doing this a few nights ago when we were coloring together. I was pretty impressed. Next step: staying in the lines. Or maybe just drawing something other than circles.

Actually, she draws lines now, too. We drew a picture of the rain the other day. It turned out beautifully! The clouds on top are mine; the circles on the right hand side are her clouds. The streaks of blue represent the rain itself, even though it oddly resembles tally marks. 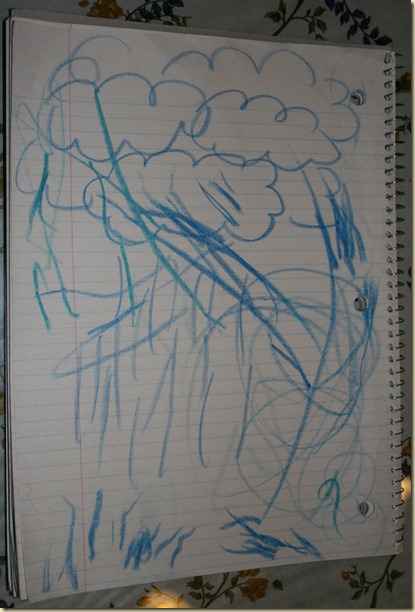 She also claims sometimes that her circles are really O's. She also recognizes R, B, A, D, and E. She also counts from 1-2* (impressive, I know) and knows some pairs in the alphabet, like AB and HI. Slowly but surely she's learning her ABC's. She also loves singing "Piddy-martet," otherwise known as "This little piggy." Tonight I introduced her to "Slippery Fish." Her favorite part of that song is "gulp, gulp, gulp. Oh, no!" And I think I sang "House/Flood/Rain," otherwise known as "The Wise Man and the Foolish Man," upwards of 15 times in one sitting.

Lastly, is the miracle of bedtime. Sara gave us a pillowcase that Rachel thinks is "nice." We put it on her pillow and now her pillow is a "nice pillow." Since receiving the pillowcase, bedtime has been awesome. Rachel gets in bed, lies down, cuddles with her blankey, baby doll, and "piano," and closes her eyes. Pooh, of course, is never very far away. The water bottle is because she gets thirsty at night—having a fan blow on you all night keeps you cool but rather dehydrated so we all sleep with water bottles close by.

Sometimes she'll ask for an extra kiss goodnight before settling down, but that's all. For the last three nights she hasn't even whimpered and we haven't even carried her to bed. We say, "Time for bed," and she runs off to her room and climbs on in. Did I mention how awesome that is? Here she is fake-sleeping for a picture. 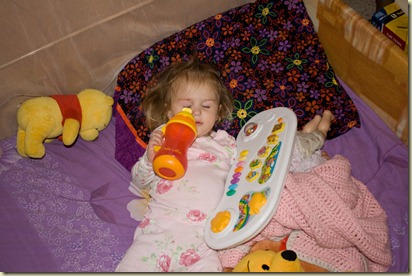 *As a PS, we were talking with my family on Skype last night and we told my parents that she could count to 2. And then we told her to count and she said, “1-2-3-4.” We were shocked. This morning, though, she would only count “1-2-arba-10!” so it might have just been a fluke.