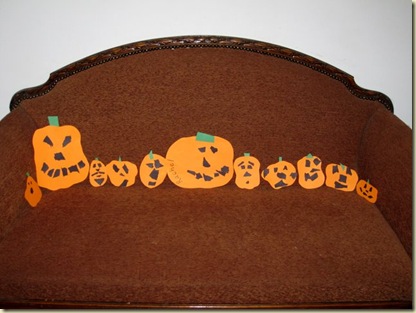 I wonder if, when you already have other kids, part of nesting is suddenly coming up with projects to do together so that you can spend some quality one-on-one time before another little person enters the scene. Either that or it’s leftover guilt from the first trimester when all I did was sleep all day, neglecting any and all parental and housekeeping responsibilities.

Whatever the cause, Rachel and I had another crafty day today.

First we made some paper pumpkins. I thought, at first, that we’d just draw faces on orange paper but then I remembered that, although Rachel loves to draw, Rachel hasn’t yet shown any real skill in drawing things that actually resemble the thing she was trying to draw. More than half the time she can’t remember what she was trying to draw, anyway.

“Look at my picture, Mommy!”

Yup. But she’s great at scribbling things. So instead of drawing faces we ripped up a piece of black construction paper (Rachel’s second-favorite part of the activity) and glued the little bits on the orange paper to make faces (gluing was her first favorite part).

We discussed what faces look like: that we have two eyes, one nose, and one mouth; the eyes go at the top, the mouth goes at the bottom, and the nose goes in the middle.

And then I handed her a glue stick expecting her to exercise some restraint while I explained that we needed to first choose some black scraps for the eyes and then glue them on. Two-year-olds don’t have restraint. I forgot. And before I could stop her the cap was off and her entire paper was covered in glue. *sigh*

I told her that she needed to follow directions and put the glue down.

She screamed. And kept gluing.

I reminded her that she needed to follow directions—that we needed to also be putting a face on the pumpkin, not just be covering it with glue.

She screamed again. And kept gluing.

I told her that if she didn’t stop and put the glue stick down that I was going to make her stop. She needed to follow directions!

She screamed some more and tried to keep gluing.

I took the glue away.

I didn’t laugh at her (even though I wanted to: ridections!) and agreed with her that not following directions tends to make us sad.

And then we made our pumpkin faces. She followed all my ridections perfectly. We made big pumpkins first—they eyes and nose were easy for her but the smile was too tricky. I ended up smearing a big smile of glue on her paper and she put the bits on, then asked to make more pumpkins. So we made more. A lot more! 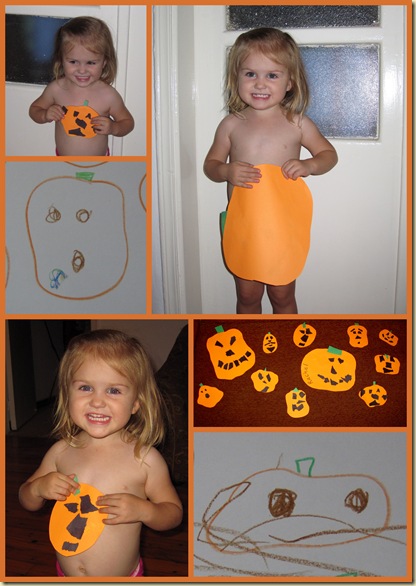 When our fingers were so covered in glue and paper that we couldn’t function I decided it was time to wash up, but Rachel wanted to make more pumpkin faces.

Not wanting to deal with glue anymore I drew some empty pumpkins on paper and had her draw faces on them. At first I would draw part of a face and let her finish it. She loved that.

“Oh, no! This pumpkin can’t see! He doesn’t has eyes!” she’d say before drawing some eyes on for the pumpkin.

When she was getting bored of that I started giving her completely empty pumpkins and she’d go through and draw little faces on all of them. Again, eyes and noses are easy for her, but smiles were tricky, tricky, tricky. She did get a few good ones in and was always very happy about making her pumpkins happy.

I drew a pumpkin with a frown and she started crying. I had to scribble it out and draw a new one. All pumpkins must be happy!

We also practiced the letter P. In addition to pumpkin, Rachel came up with the words penguin and popcorn. She had trouble tracing the Ps, but when I gave her a blank piece of paper to colour on she drew a beautiful backwards P all by herself. She just wanted the loop to go the other way, I guess.

And this has nothing to do with pumpkins or jack-o-lanterns or anything, really, but I think it’s hilarious.

In Rachel’s storybook of Beauty and the Beast, the word “hesitated” is used. Rachel is always asking for definitions when we read books, which I think is weird. Anyone else out there have a child who asks for definitions at age two? Just me? Okay, then.

“Are you happy here with me?” the Beast asked.

“Mommy, what does hesitated mean?”

“Well…it means you think for a while before saying or doing something.”

“It’s like if I asked you to give me a hug but you weren’t sure you wanted to, so instead of giving me a hug right away you stop first and then give me a hug.”

“Exactly! See, you hesitated before giving me a hug.”

We went on with the story but she did not quite grasp the concept of hesitating. Now Andrew and I both have to be on the lookout for her to come charging at us yelling, “HESITATE!” while latching herself onto our nearest limb in a big bear hug.

That is soooo not what hesitate means, but at least she can follow ridections.