Yes, I’m still pregnant, which means that I’ve been spending a lot of my time wishing this weren’t so. It also means I’ve been spending a bit of time reading some books on the Bradley method of natural childbirth, not because this is my choice of methods for natural childbirth but because I happen to have access to some books and it can’t hurt to be familiar with his theory.

I just finished about all I care to of Husband-Coached Childbirth. I would have read the whole thing but some chapters just aren’t relevant (same with Ina May’s Guide to Childbirth). I don’t think that I need to learn about VBACs or care much about research that proves the Bradley method effective. Perhaps I should, but since my time left as a pregnant woman is short I think I should be reading the relevant chapters first.

Dr. Bradley’s theory is basically an observation of instinctual natural childbirth in animals like cats, dogs, horses, and cows. How is it that they automatically know what to do and humans do not? I think it’s because the whole process has been so institutionalized that we think we can’t. If left on our own I’m sure we’d figure it all out.

It was interesting to me to read this, though, because before I even picked up his book I began thinking about my cat, Winter, who had two litters of kittens very close together. We weren’t very aware that she was pregnant either time.

The first time we had been babysitting my uncle’s kitten and neither Winter nor the kitten, whose name I can’t remember, was “fixed.” Winter went into heat and we did our best to keep them separated but, alas, she ended up pregnant.

One day in the wee hours of the morning Josie came into my room to tell me she could hear mewing. We searched around her room until we found Winter, along with a couple of kittens, curled up under the crib in her room. We moved her upstairs into the shower with some towels to finish birthing her babies.

She ended up with four kittens: two perfectly snow white and perfectly soft like their mother, two with tabby tips and wiry fur like their father.

Keeping him helped dull the pain of getting rid of the other three.

Staying around his mother, though, didn’t help him grow up faster. Winter’s maternal instincts went into hyper drive after losing her other three kittens and Simba became the direct object of all her motherly affection. He nursed longer than I’ve ever known a kitten to nurse.

Winter went into heat again and was still nursing Simba, who was about 8 weeks old. One day while nursing we caught them “in the act,” so to speak. Surely, we thought, pushing the thought out of our minds, an eight-week-old kitten couldn’t get his mother pregnant.

Weeks went by and Simba continued to nurse Winter. She continued to let him and still gave him tongue baths occasionally—a skill she never quite mastered (I say her maternal instincts kicked into hyper drive but truthfully she had very few instincts of that nature). We didn’t suspect a thing when we noticed her getting fatter.

There’s a stick in the sliding door leading to my parent’s backyard that allows the door to be opened 6 or 7 inches wide, but nothing more. When we let the cats outside we’d never remove the stick because seven inches was plenty of room to allow them to slip through. A short while before Andrew and I got married, Winter got so fat that she got stuck in the doorway. We started to suspect there was a problem and we began to fret about what it was.

We had never taken her to the vet, but she had always been a very healthy cat. We started observing her litter box and how much she was eating and looking for odd behaviors.

One thing we noticed was that her litter box was completely void of feces. We thought that she had switched to doing her business outside, so we kept her in for a few days and still nothing turned up in her litter box.

We came to what we thought was the obvious conclusion: Winter was constipated. Bad.

Then we came up with what we thought was an obvious solution to her constipation problem: castor oil.

Patrick was the one to force it down her throat, I believe, and it certainly did fix her constipation problem! But after that problem was fixed Winter was still huge.

She started pacing the floor soon after she had relieved herself and began following us around, begging for affection. Soon we noticed that she was bleeding and realized that she was in, of all things, labour! Instead of letting her make her own nest, we brought out some old towels and encouraged her to make her nest in the bathroom—we didn’t want to let her pick her own place this time—which she was happy enough to do once we locked her in for a while.

At the end of her labour, which lasted longer than 24 hours, she had eight beautiful kittens. EIGHT! 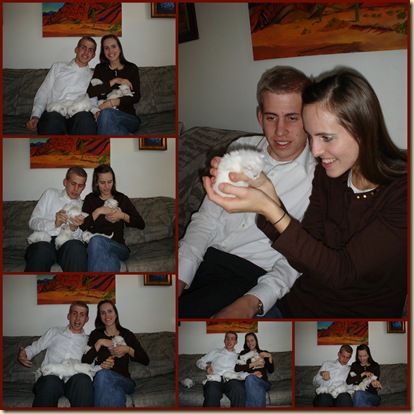 She was so exhausted by the end of it al, but it was an interesting experience for me. Andrew’s sister Katharine got a veterinary assistance certificate at Mountainland Applied Technology and she came over to help for a while. After four kittens had been born she announced that a) there were still more kittens inside and b) she had to be going. She’d been there for most of the morning and I had watched what she had done, so I took over as midwife for the afternoon and evening.

It was an interesting learning experience to watch Winter at work, and one that I’ll never forget. I suspect that I learned a lot from that experience; I don’t think it would be a bad thing for everyone to watch an animal give birth. I’m not sure Andrew agrees. 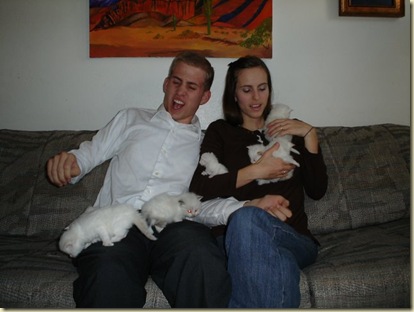 She was so calm through the whole thing. Panting, pushing, panting, pushing. Over and over again—eight times! I can’t even imagine…

I held a bowl of water up for her to lap at when her breathing started getting raspy and helped her make sure all her little ones got latched on after they were cleaned off. When the littlest of the bunch—a tiny little runt—she had enough energy left to lick off its face and then she quit.

I finished cleaning it off for her, including dealing with the cord, and helped it fight its way through its hoard of siblings to get its share of milk. It ended up dying later in a fatal accident…I won’t say what because it might still be a sensitive subject…but it thrived for a while, at least as well as a runt can thrive.

A few others of the small ones ended up passing away, but we ended up giving most of them to the animal shelter to sell. Cute white kittens sell well, apparently, not that we had had much luck with it.

Again Josie picked out a kitten to keep and called her Lahki. Winter, Simba, and Lahki: I’ve never quite been able to figure out how they were all related. Winter is both Lahki’s mother and grandmother since Simba, the father, was both Winter’s lover and son; Simba, on the other hand, is both Lahki’s father and brother. It’s a little twisted.

To keep things from getting further complicated, all three of them were fixed at the next available moment.

Lucky for me, I’m only have one baby, not eight. Oh, and I still fit through the door…