A bunch of other stuff happened and then…

That’s been taking up quite a bit of everyone’s time but it was fun to help out and to reminisce about our own wedding. Sarah took out her endowments at the Mt. Timpanogos Temple, which is where I took out my own endowments and where Andrew and I were married and sealed. It was fun to be with her on that day. 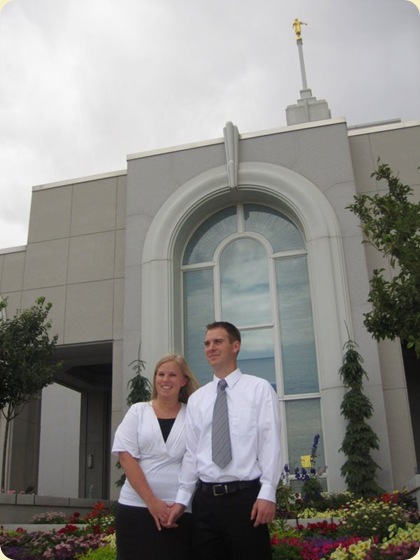 On Thursday we went to the family dinner. Rachel had so much fun racing around with her little cousins. Andrew’s cousin Jessica was there with her little girls and Rachel thought Leah was just the best. Most of the cousins (first cousins and more distantly related ones as well) that Rachel has met have been boys so she was excited to know there were some girls in the mix. It was hard to get a decent picture of any of the kids, though, because they were all racing around the whole time. Kayl, Leah, Jared, Kade, and Rachel were virtually unstoppable. 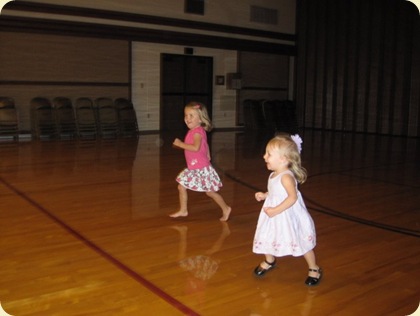 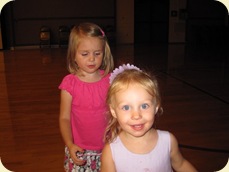 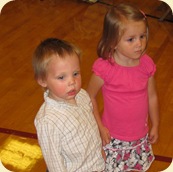 Miriam was content with Grandma Sharon’s missionary nametag, though she did get down and try to crawl after the big kids a few times. She just isn’t fast enough to keep up yet. 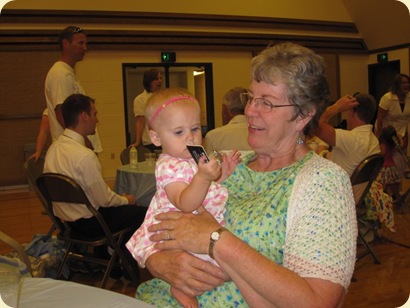 Her wedding day was also fun. She got married in the Manti Temple so we all had to head down there in the morning to attend the ceremony. Rachel was so excited to go to the temple and even though she had to stay outside with Auntie Josie and Lauren she said that it was the favourite part of her day and even though she wasn’t allowed to wear pink. Sarah’s colours were blue and white—we all thought that she would choose pink because her favourite colour, like Rachel’s, is pink; however, Cory didn’t want to wear pink or something like that so instead they chose a royal blue in honour of his first Mustang. That’s a car, not a horse…just in case there was someone out there who knows even less about cars than I do.

Due to the colour scheme Rachel was banned from wearing pink, which she perceived as an absolute tragedy. In order to get her to agree to wear the cute skirt/blouse combo that Grandma found I had to bribe her with pink glittery nail polish. She was rather pleased with her manicure (actually, I did her toes, too…so I was wondering…if you get a manicure and a pedicure at the same time, what is that called? Are you just cured?) and kept going around showing various people her nails and telling them that “I don’t get to wear pink because I have to wear white and blue. But look at my nails! They’re pink!” It was a good compromise. 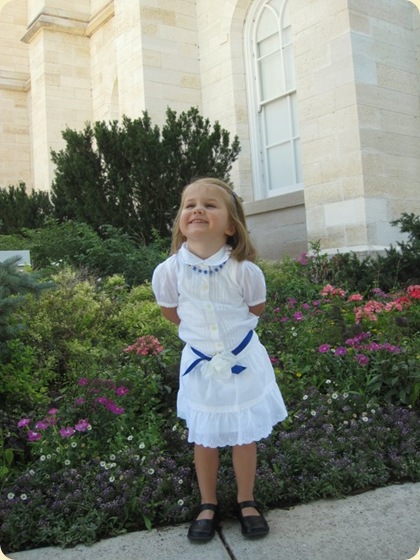 The wedding was lovely. Sarah was so antsy that she had to say yes twice. The sealer had barely addressed her, “Do you, Sarah…”

“Yes!” she blurted out before he had even asked her what it was she was so eager to commit to.

There were a few snickers and Sarah turned bright red, but the wedding continued and she was able to say yes again…and at the right time, too.

The sealing room was so crowded that the men were asked to stand behind the chairs so the ladies could be seated. Andrew and Jacob ended up standing behind me, which was fine except that I was sitting right below one of the two mirrors in the room. “In…sealing rooms, mirrors reflect images back and forth so that they appear to go on forever. This symbolizes eternal life,” and after the ceremony is over it is tradition for the sealer to position them so they can see their reflection in the mirrors and remind them of that.

When the sealer brought Sarah and Cory to look in the mirrors, though, Andrew and Jacob were still in the way. They quickly ducked out of view.

Andrew joked later that they almost pulled an “eternity bomb.”

You’ve heard of photobombs—when someone crashes a photo shoot, whether purposefully or accidentally, like that cute seal picture* floating around the great, wide internets? An eternity bomb is kind of like that only Andrew and Jacob didn’t feel comfortable hijacking Sarah and Cory’s eternity view.

After congratulating the couple—and teasing Sarah about being so trigger-happy—we filed outside for pictures. It was rather warm, but I found it funny that Sarah was complaining about having to wed on the “hottest day of the year.” It was 98 degrees, which is nothing compared to some hottest-days-of-the-year that I’ve encountered in recent history. I thought the weather was just great, but I wasn’t wearing a corset and a bajillion flouncy layers, either.

Sarah was beautiful, naturally, and beaming. 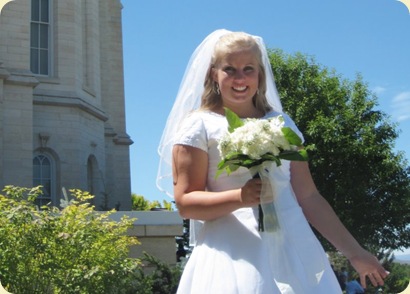 We didn’t take many pictures because we were so busy being in pictures, but we did manage to snap a few, most of them with that awkward candid-moment feel. I can hardly refrain from making up captions, but I will. Feel free to suggest your own; I will merely point out what I find humorous. 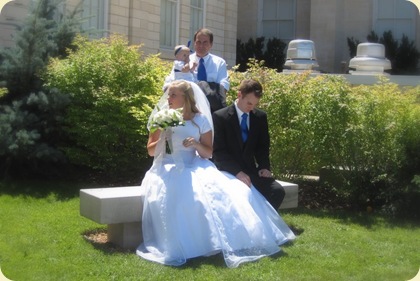 2) Sarah and Cory look shocked to see each other. 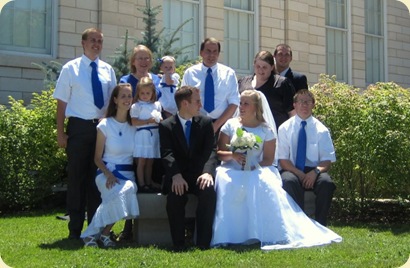 3) This almost looks like Andrew is the groom. That’s just wrong. 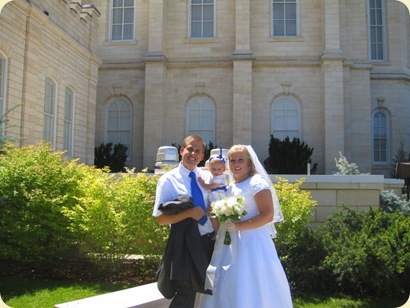 Some of the pictures turned out alright. I’m sure the professional ones will be even better. 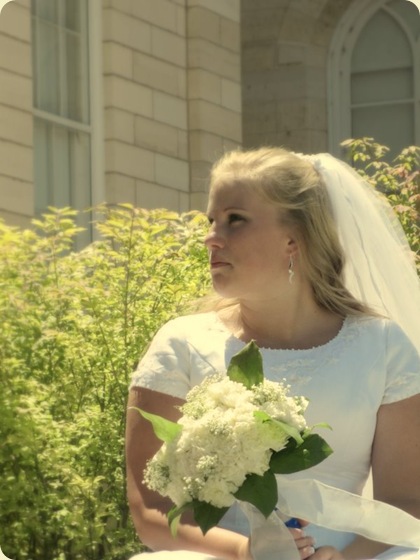 5) This is Cory’s side of the family—his sister and brother and their spouses, and his mother. His father is deceased. 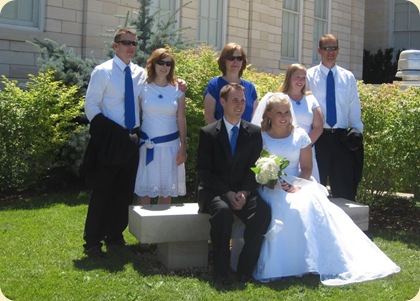 6) This is our side of the family—with Grandma and Grandpa Frank and Aunt Lynnea and cousin Daniel. There were more relatives there they just managed to escape somehow before this picture was taken. 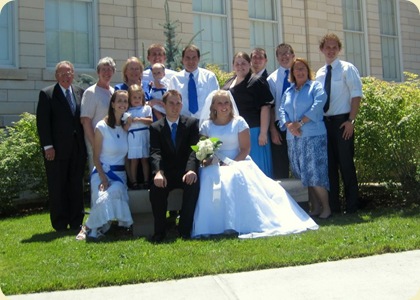 7) Sarah’s side of the family, minus Emily, who is on a mission in Nauvoo, and Kayl, who was at home with a babysitter. 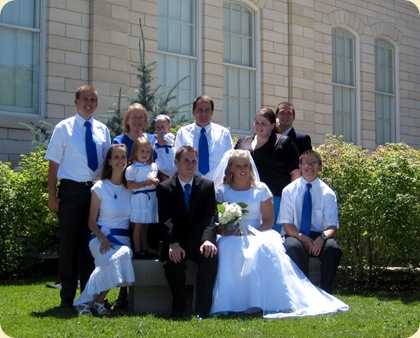 8) This is Sarah and Cory with their parents. 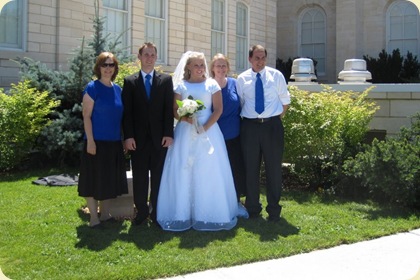 We also took some family pictures since we haven’t really done that since Miriam was born and since we were forced into coordinating outfits we figured we may as well take advantage of the occasion. We tried to get a cute picture of the girls sitting together but when we handed Miriam over to Rachel…well…one thought it was wonderful and the other classified it as an act of treason on our part. 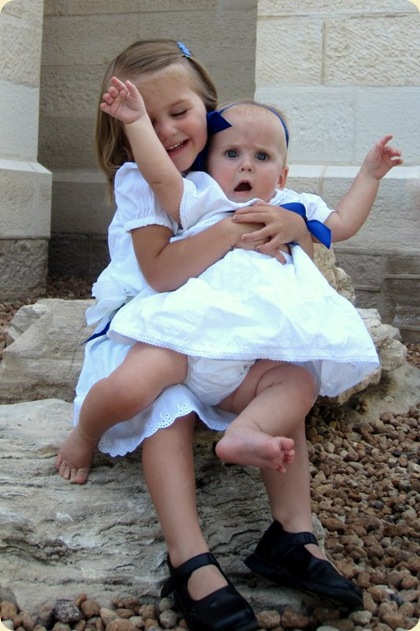 But Miriam got over it long enough to put on a grimace that was close enough to a smile. 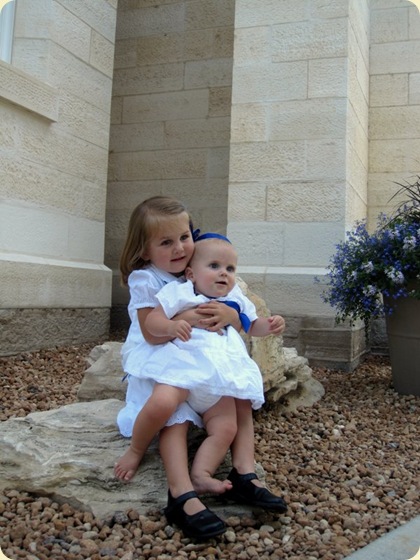 Rachel had watched Auntie Sarah posing with Uncle “Fory,” as she calls him, in her beautiful wedding dress and became absolutely enamored. She also became gloriously cheesy and pose-happy. She was climbing up on things and asking us to take her picture left and right. It was a nice change from how camera-shy she’s been recently. 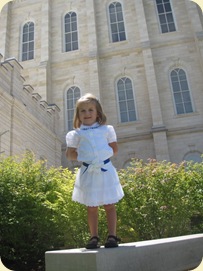 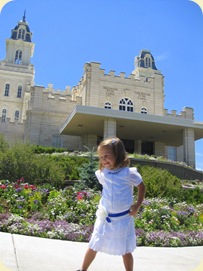 We managed to get a few okay pictures in, although Miriam’s patience was almost through by the time we got around to it. 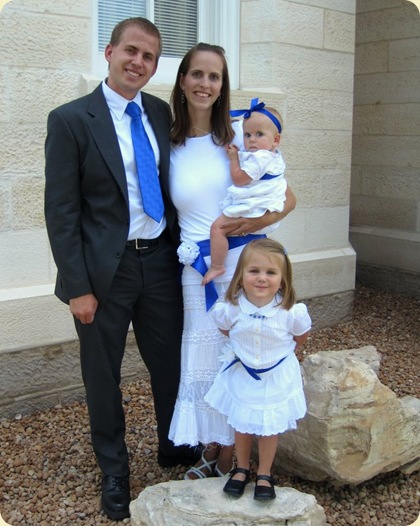 I wanted to get a solo picture of Miriam in front of the temple but didn’t dare since she was wearing that pretty white dress. Instead I held her which means that I was in the picture, too. 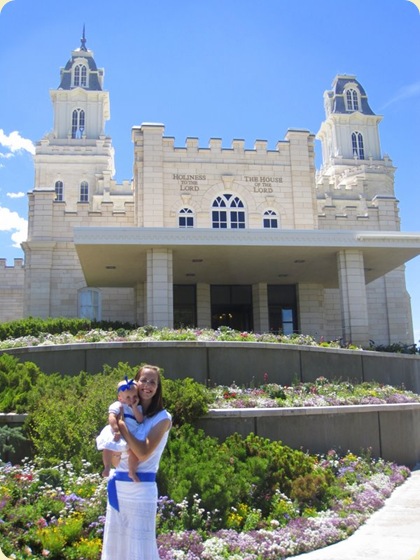 It probably would have been okay but, I’m telling you, this baby has a talent for getting dirty. She has grass stains on more than one pair of pants and she’s only 9 months old and since she scoots on her belly instead of crawling on her hands and knees her shirts are always filthy. I didn’t want to risk it since she still had to be looking as pristine as possible for the reception, which was still hours away.

If you’re wondering if she spent the interim mostly in her diapers, the answer is yes. Naked babies are much easier to keep clean.

Sarah had her reception in the backyard, which we had transformed into a beautiful table-filled garden. Karen and Sarah are both very detailed-oriented and it ended up looking great. 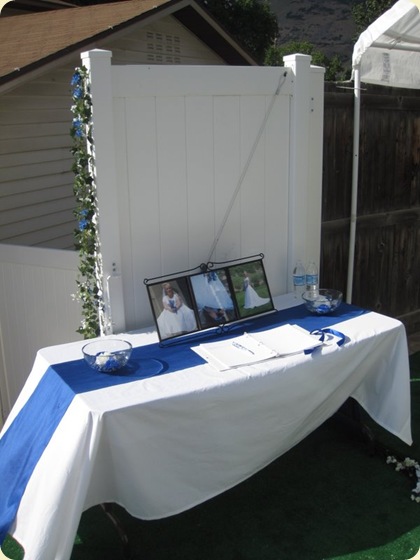 Rachel literally shadowed Sarah. She was right on her tail for much of the evening. I’m pretty sure that Rachel would have given anything to trade Sarah places. 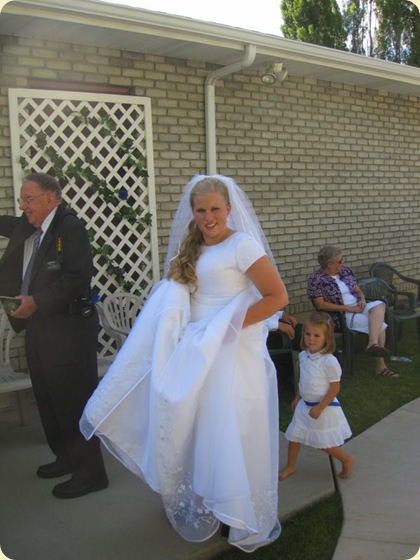 She even joined Sarah in line. We left her there because she was happy and we were mingling with guests, but then Rachel ran over to us in tears.

“They kicked me out of the line!” she wailed.

Andrew got her a bowl of chocolate cereal (yes, Sarah had a breakfast bar for refreshments, cold cereal included) and then she felt much better. She even went back to stand by Sarah for a while before taking off to play with Kayl. Later we got the whole story and she wasn’t kicked out of the line, per se, but had found her way into Grandma’s arms and Grandma was too hot and tired to hold a great, big, almost-three-year-old while standing in line so she put her down and told her to find us. Rachel can be a little emotional and interpreted this to mean that the world was ending.

Miriam was less of a hassle during the reception. The hardest part was keeping track of who had her. She was zonked out for at least half of it and was bouncing around from relative to relative, many of whom hadn’t met her yet since we have been harbouring her away in Egypt until recently. 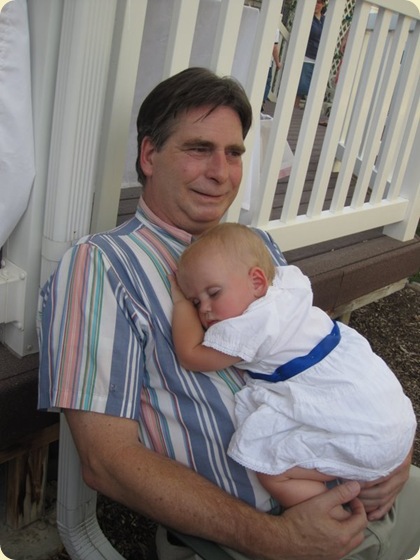 When the reception was over we accompanied Sarah and Cory out to their escape vehicle. Someone gave Jacob a bag of confetti and unleashed him on the couple. He danced around them, butchering Mendelssohn’s Wedding March while showering them with armfuls of confetti. 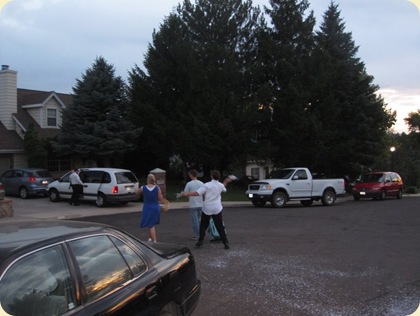 We decorated their car with Oreo cookies, shaving cream, and magnetic letters, we trailed empty cans behind the car, and filled the inside with, among other things, balloons that had been stuffed with their favourite candy. 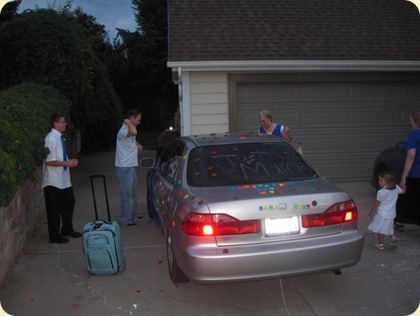 I’m not sure that Cory was impressed but he was fine with the idea of having Sarah’s car decorated. They drove it to his car—a Mustang—which was parked in an “undisclosed location” and which we didn’t violate (even though we knew where it was parked the whole time). They used his car for the honeymoon vehicle but were nice enough to clean the car inside and out before leaving (did I mention Cory likes cars a whole lot?) so that we didn’t have to when we picked her car up.

After we got the girls settled down and in bed (which took a while…I think they had too much cake or something) we played games in the quiet evening, surrounded by cereal bowls, muffins, beverage dispensers, and flowers because, unlike Cory, we were content to leave the most of the mess for another day.

*Actually not a photobomb, but cute nonetheless.