In Maadi, the walk to Midan Victoria scales residential walls to include political buildings, church buildings, schools, train tracks, stores, embassy compounds, hotels, banks, pharmacies, kiosks…just about everything we could ever need can be found between our apartment and Midan Victoria. And who knows how many hundreds (thousands?) of people lived in the apartment buildings we would pass.

Here we have to drive a lot more. Our girls are slowly getting used to this although they still start whining about wanting to “just get out and walk” when we’re still fifteen or twenty minutes away from our house. By car.

Rachel still sometimes wonders aloud about where our driver is.

“Daddy, you can’t drive because you have to hold me. The driver can’t hold me…if you drive the driver has to hold me and I don’t like drivers to hold me.”

She’s back in the “real” world where people drive their own cars and clean their own toilets instead of having chauffeurs and housekeepers to do those sorts of things for them. Not that we ever had that luxury ourselves, but several of our friends did and Rachel came to accept it as normal.

I went inside a grocery store for the first time on the fourteenth—that is one of the perks of living with Andrew’s parents. I hate grocery shopping so I really don’t mind that I’ve only been once since we’ve been back. It was quite a shocking experience, though. There was so much food inside.

Milk, sour cream, salsa, tortillas, brown sugar, peanut butter, bread, cereal, more than two flavours of yogurt! It was amazing. We walked past the meat section to see if it smelled like decay and it didn’t. No flies or wasps were buzzing around the produce. And, by golly, everything had a price tag!

I also couldn’t get over the shopping carts. Rachel, who has done way more grocery shopping here than I have recently because she likes to go with Grandma, likes to take the “car” carts. Those things are whopping big with room enough to seat four children (two in the car part and two in the cart part). It was nice to have both girls so contained yet simultaneously so far apart. 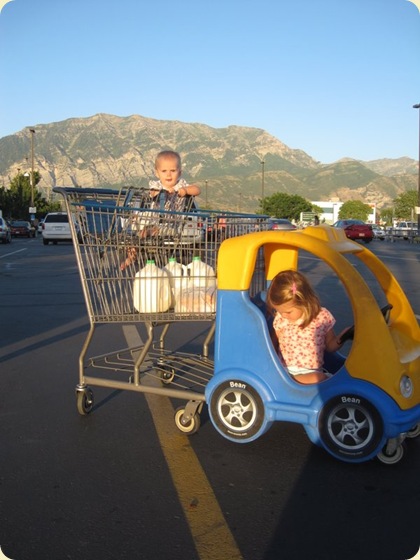 The only bad thing about these carts, besides the fact that they are huge, is that only the rear wheels turn. I got so used to carts with “four-wheel” drive while in Egypt that now pushing carts without it is awkward. More than once we were stopped in the middle of an aisle, jaw-dropping over how many brands of toilet paper there are, and someone would need to sneak past our cart.

Now, normally, there would be room for two carts to pass in an aisle without a problem, which is a huge change from most stores we’ve shopped at in the past few years. With our double-wide cart, however, this was not the case. I’d have to move the cart.

“Oh, let me just move this out of your way,” I’d offer and give the cart a little tug to the right. It wouldn’t ever budge, of course, since the front wheels don’t turn, so I’d have to remember that I have to actually get it started moving forward before I could move it to the side.

Not that that’s a huge issue when there are twenty brands of toilet paper to admire. Or when you can walk past the meat counter without gagging. Or when you can find tortilla chips whenever you want. No, I don’t mind having to wrestle a huge cart that without four-wheel drive at all.