We had a lot of fun this year I think, in part, due to the fact that we’ve just returned to the States and have been enjoying a constant stream of cold cereal. With Sarah’s wedding reception out of the way it seems our luck with continue—there were about seventy bags of cereal left over. I know this because today I made Rachel help me carry them downstairs to the storage room as part of a punishment for throwing a royal tantrum when I asked her to wash her face.

The way she was acting you would have thought I was forcing her to carry sandbags. In actuality each bag weighed maybe two pounds.

They were stacked in the corner of what is now our office (which was Jacob’s room for the past couple of days and Sarah’s room before that) and we needed to get them out to further enjoy our stay in the grand US of A.

We would have enjoyed it, anyway, due to the copious amounts of cereal bestowed upon us, but it’s still nice to have some office space. 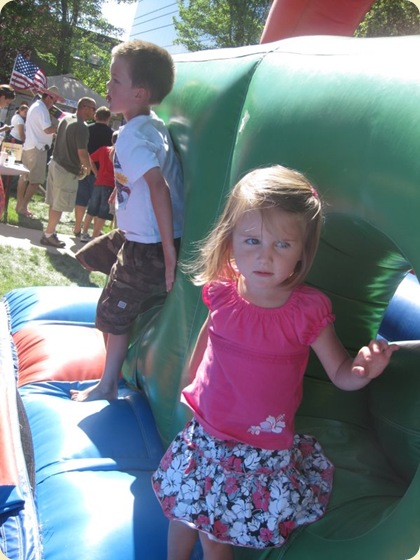 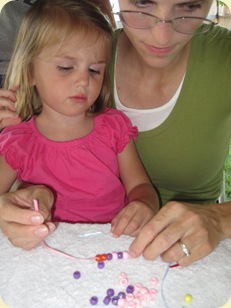 We went to the Provo Freedom Festival to enjoy some of the goings-on over there. They had some fun booths set up—a bounce house, a teepee, a craft stand, and a reptile show to name a few. Rachel enjoyed the crafts and the reptile show a whole lot but didn’t seem to like the bounce house at all. She was apathetic toward the teepee but really enjoyed banging the drums. 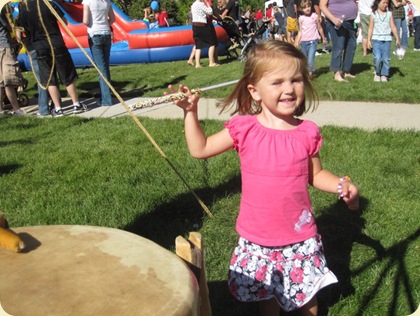 I thought it was funny that the teepee station was sponsored by “The Order of the Arrow,” which is part of the scouting program, so the people manning what seemed to be a celebration of Native Americans were Caucasians all dressed in rather feathery, leathery, brightly coloured garb. 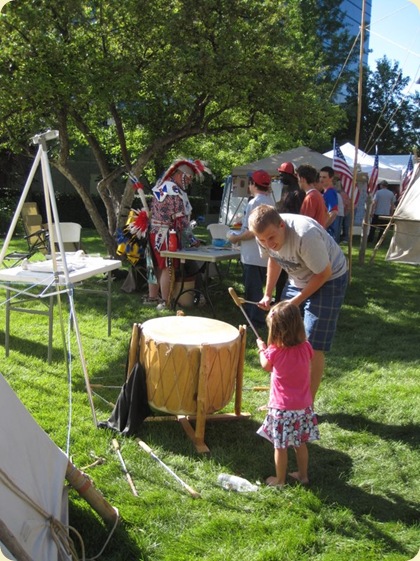 And I was so looking forward to seeing some hoop dancers or something before I realized it was just a scout troop! Oh, well.

After spending some time in the “carnival” area we visited the vendor booths, which were laced with laughable Republican/Tea Party propaganda. Seriously SO much hud, and so much of it laughable. We did end up purchasing something from a non-political booth. Snow White and Belle were walking around the grounds waving at everybody and, later, we saw them manning a booth selling cute barrettes. Rachel wanted to buy a whole princess costume but we made her settle for less—a few sets of barrettes.

All the outdoor stands reminded us a bit of shopping in Egypt. Plus there were so many ridiculous things to be seen… 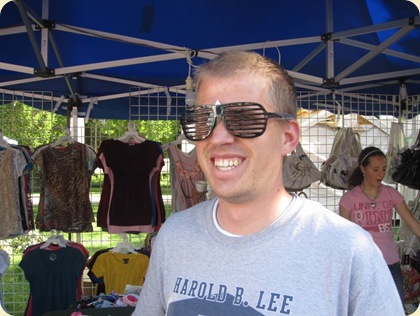 We also had fun looking at all the food (and, yes, sampling some of it as well). Besides the regular things like Kettle Korn, funnel cake, and cotton candy there were, I kid you not, deep fried Oreos. We didn’t get any of those but we did get some Twisted Taters. There’s this weird drill contraption set up and they stick a potato on the drill and spin it around and a knife cuts it into one long spiral and then they fry it up like one long spirally potato chip. It was good. 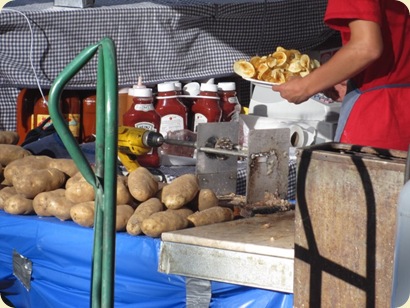 Miriam came, too, of course, though she spent a lot of time wandering around with Grandpa since she was too little to enjoy many of the activities. 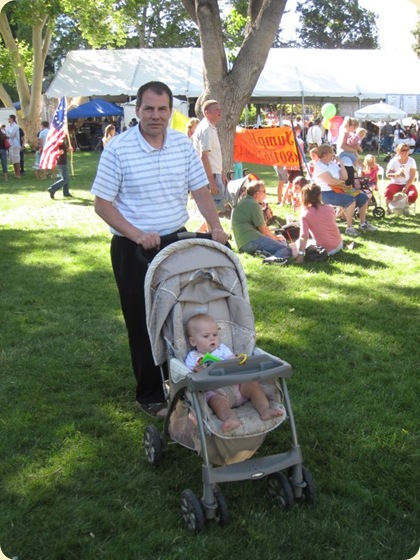 She did, however, get to enjoy some yummy juice that we found. 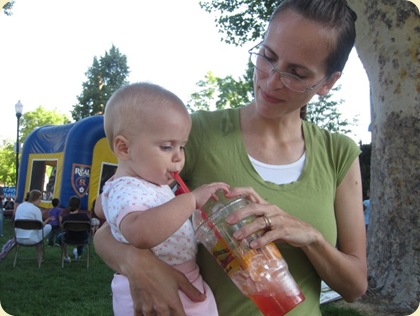 The girls got to see fireworks twice and they both seemed to like them a lot. I find it funny that there aren’t any “city” fireworks. Where I grew up it seemed like every city and even some small towns hosted a decent firework show for Canada Day. Here there is the Stadium of Fire, which the public can view, but the tickets for the show are rather expensive if you want to see it in the stadium. Rather than have city fireworks everyone just lights their own fireworks. Weird, I know.

Our next door neighbours had their grandkids over and since they came to ask us to move some cars so they could light them in the cul-de-sac we invited ourselves to watch them light the fireworks off. One of the kids was even so kind as to share some “snappers” with Rachel while we waited for the grown-ups to get organized.

Rachel was running around with the little boys, trying to find the parachute guys that blasted off, and warned everyone to cover their ears before each firework was lit.

When we put her to bed that night she said in her prayers, “And please bless that I really liked those fireworks a lot!”

We’re working with her on tenses, as well as the difference between asking and thanking is.

Andrew’s dad is a bishop of a BYU single’s ward and his ward came over for FHE on Monday the fifth and they packed some fireworks along with them. College kids* do goofy things with fireworks and these kids were no exception. Pretty soon they were lighting them and throwing them up in the air so they would explode mid-air and other things like that.

This one boy lit the firework and then forgot to throw it so it ended up going off in his hand. We were all yelling at him to drop it but he was too shocked to do anything. Luckily it wasn’t a very big firework and didn’t do very much damage, although he did manage to scorch his fingers pretty bad.

We also went to an Independence Day breakfast for our ward and did a few other things I can’t think of now. It was a busy time. This whole month has been insanely busy, but at least we have our cold cereal, right?

* Haha. I say kids but they’re really mostly just about my age. Since I’m married, though, my age doesn’t matter anymore. They all think I’m ancient, I’m sure, since I have two kids and they’re still wasting away in classrooms.