Since we slept in so late we only had time for a quick hike on Monday morning before the rest of the crew arrived. Grandpa took us to hike Hickman Bridge, a natural bridge found in Capitol Reef National Park. I’d never hiked it before so I was excited. So was Rachel who didn’t ever quite catch on to the concept of “natural bridge.” 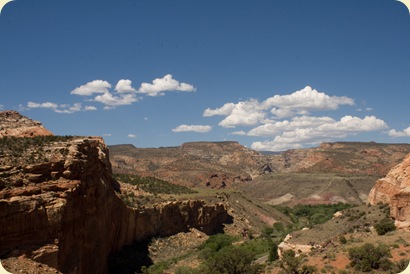 Andrew carried her in the backpack and she chatted to him on the way up about the Nile and how it would run under the bridge and how people would be standing on the bridge and would wave down to us and how we could walk over it and get to the other side. She was pretty excited about it even though we explained to her over and over again that it was a natural bridge—carved out of stone by an ancient river—and that the Nile was in Egypt and we were not. 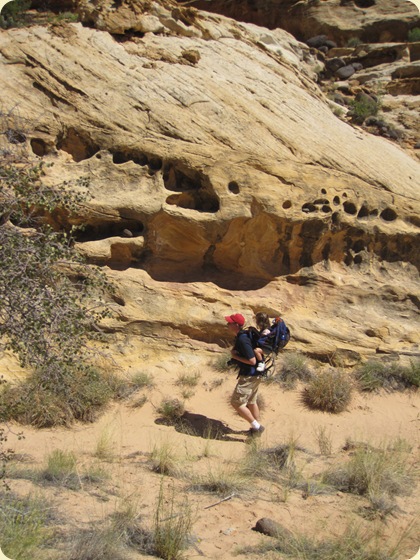 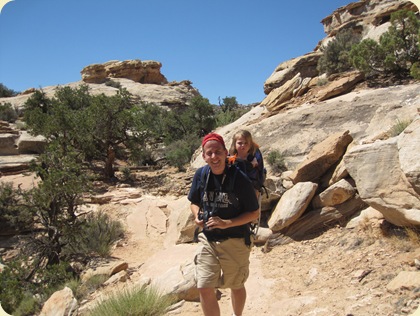 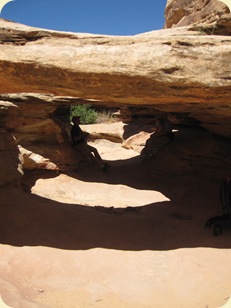 She refused to get out and walk until we made it to the “holes” and Grandpa promised her that she could have a snack. It took her a long time to warm up to exploring but eventually she agreed to wander around a bit, but only under the condition that she hold my hand so I traded Miriam for Rachel. We walked up on top of the little bridges and underneath them and all around. 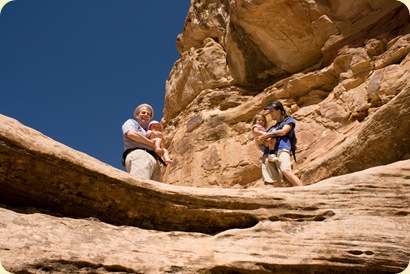 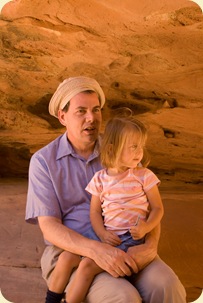 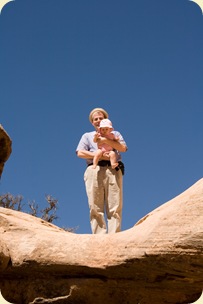 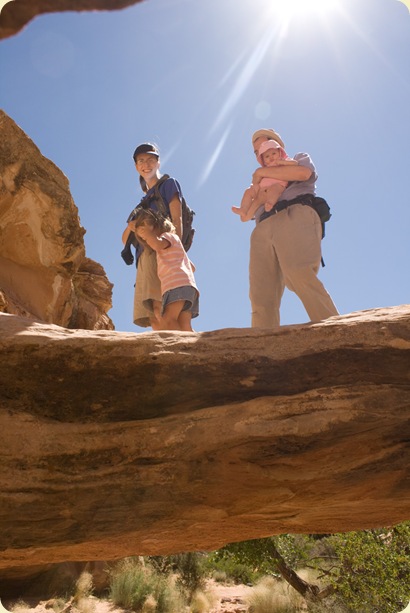 We found a “seat” for Rachel that was covered with mud handprints that reminded us a bit of Eid al-Adha. She wasn’t terribly thrilled with us forcing her to have her picture taken. 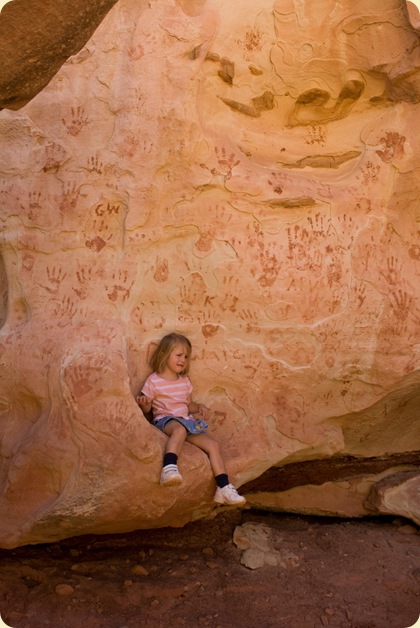 Rachel was sorely disappointed when we got to the bridge. It wasn’t at all what she was expecting. Andrew asked her if she thought it was cool. 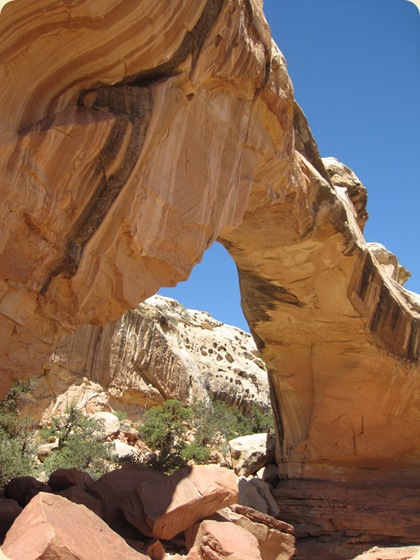 But then Daddy taught her about echoes and she brightened up.

And screamed her lungs out.

I’ll admit that it’s no Delicate Arch but I thought it was pretty cool (so take that, Rachel). 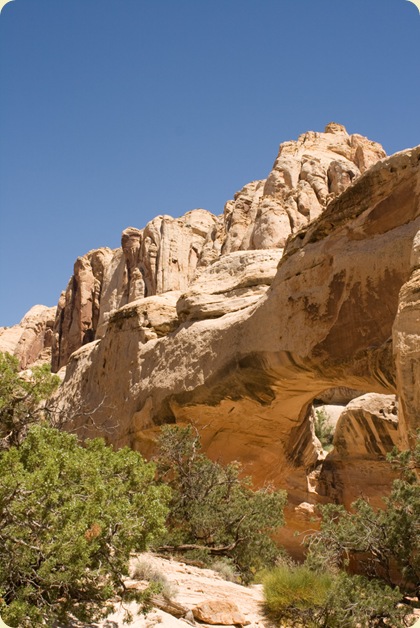 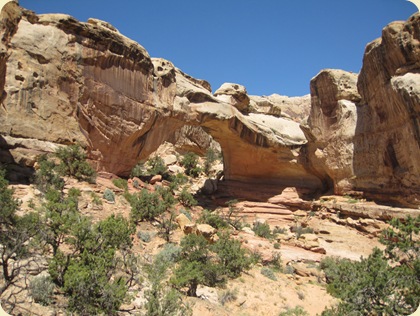 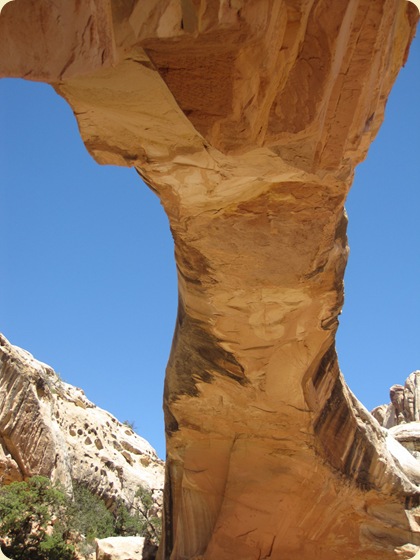 Rachel walked around the bridge and all the way until it got all hilly. Then she went up in the backpack. 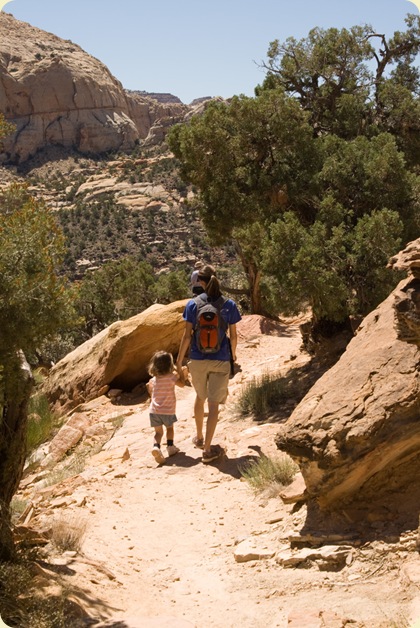 It was a short hike, but it was fun and we, of course, enjoyed the landscape. We saw Pectol’s Pyramid, which Rachel easily identified, as well as Capitol Dome. 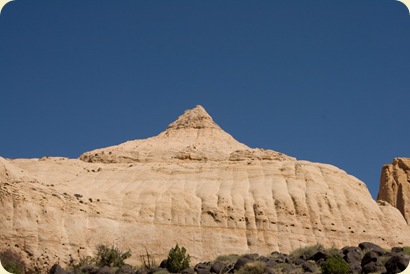 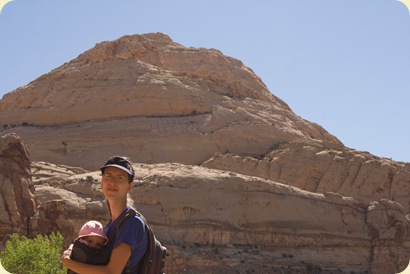 When we got back to the trailhead Grandpa asked Rachel if she wanted to put her feet in the river. She didn’t and complained that it wasn’t really a river since it isn’t big like the Nile. I suppose when you’re used to having one of the largest rivers in the world just down the street any other river seems insignificant. 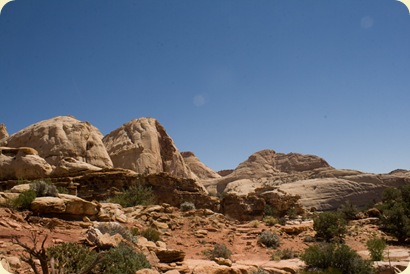 We went back to camp where Aunt Katharine and Kayl, Uncle Jacob, Richard and Diana and Michael, and James and Phillip had arrived and were busy setting up their tents. We had some lunch and played around a bit before the Wights got there. Then we left for Fremont Falls. 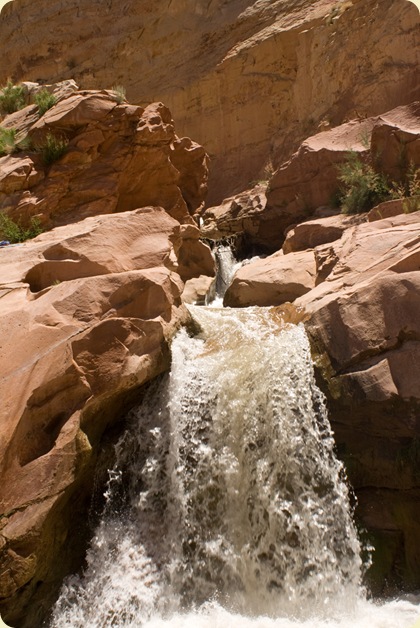 The Fremont River runs through Capitol Reef and there is a lovely waterfall just off the highway (where we watched the flashflood two years ago) that we enjoy playing in.

Rachel didn’t want to do anything more than wade in the shallows, which was fine because that’s all Michael, Kayl and Miriam wanted to do, too. 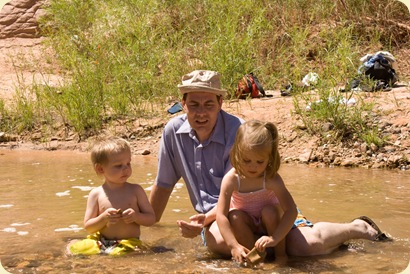 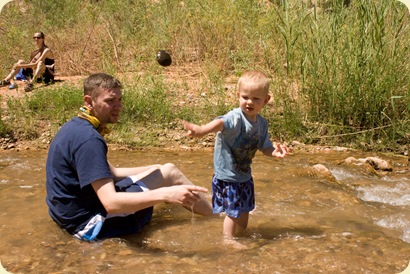 The waterfall is slowly causing the pool at the bottom to get deeper so it’s getting harder and harder to get back behind the waterfall. I’d actually never been back there but Andrew has and he kept insisting it was a must-do. The only problem was it seemed quite the impossible task. 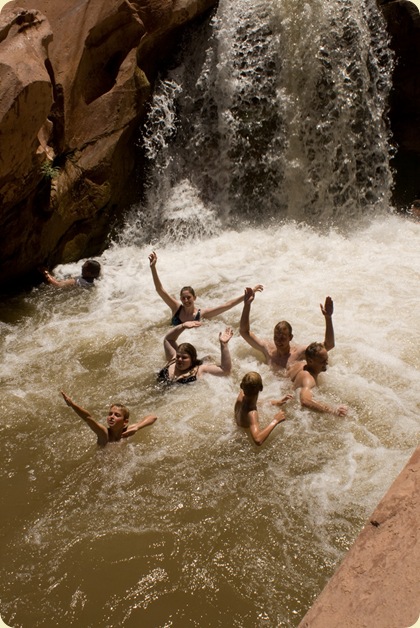 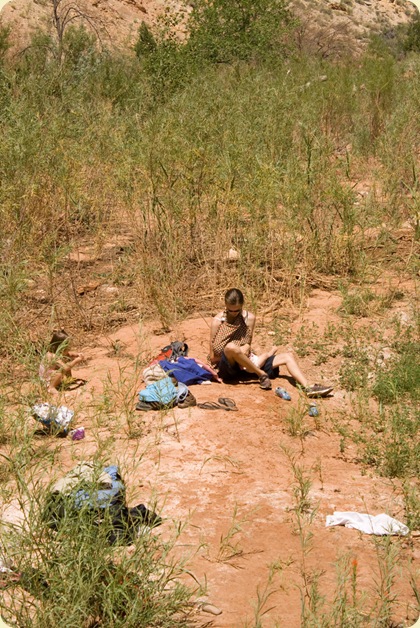 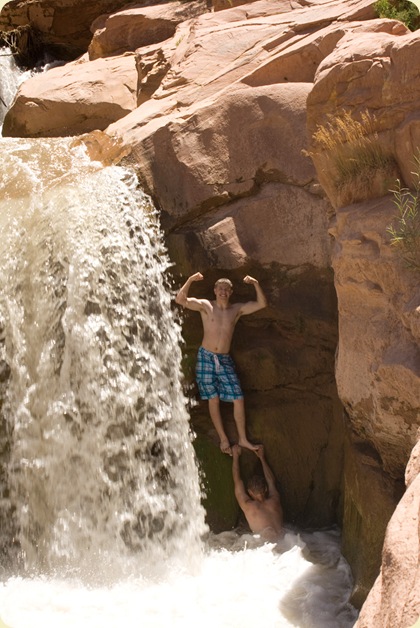 Eventually Andrew convinced me to join in.

Getting up was the easy part. For me, anyway. All I had to do was swim/rock climb over to Jacob and grab onto his foot. Then he bent over and lifted me up in a bear hug and passed me to James who helped me get into the cave behind the falls. I’m smaller than both Jacob and James. Andrew is not and ended up pulling Jacob in accidentally instead of having Jacob pull him up onto the cliffs. 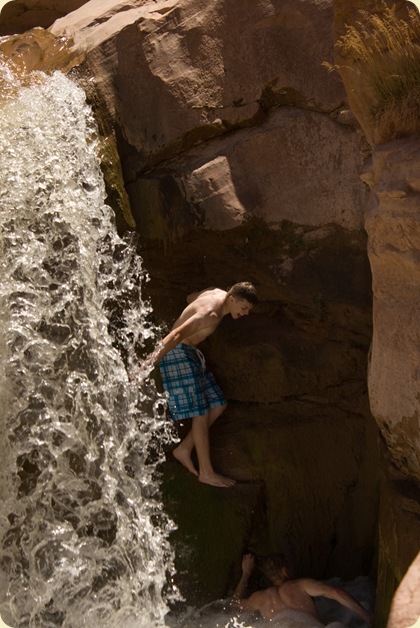 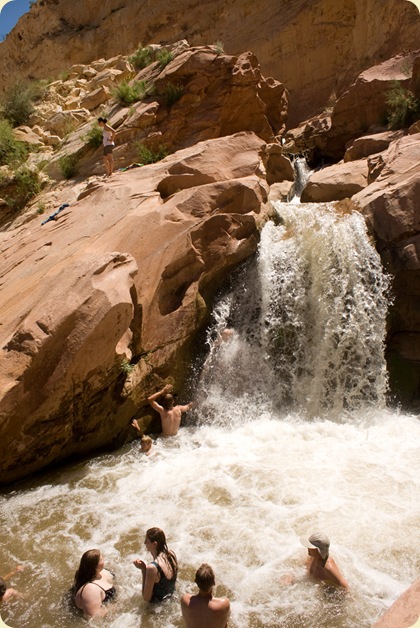 Finally after watching Phillip and Matthew jump I decided that I could do it, too. Diana went soon after me and apparently even Andrew jumped in, though I didn’t see him get up the waterfall or jump back down since I was busy calming Rachel (who was overjoyed to see me return from the falls alive). 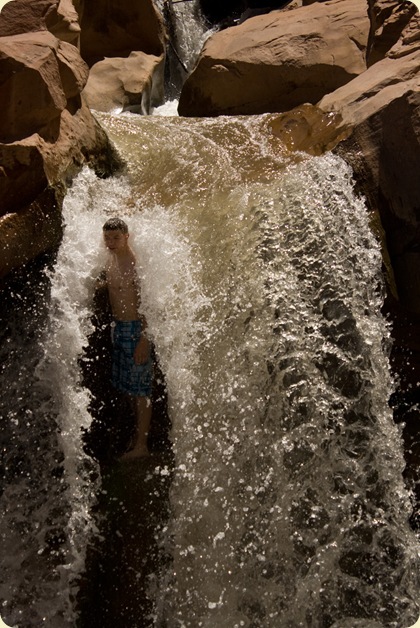 It was fun but I made a solemn promise to never do it ever, ever, ever again. Grandpa told Rachel that there was a water monster and that it ate me…or something like that…so when I was putting her to bed she asked me if I would promise her to never visit the waterfall monster again because she was so scared while I was gone. 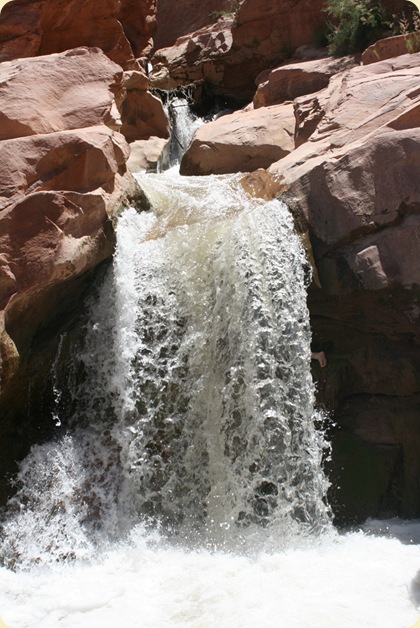 Later she asked if we could go behind the waterfall together when she’s as big as me so apparently when she said for me to not go to the waterfall “ever, ever, ever again” she didn’t really mean it. Perhaps she’ll even forget about it by next year.