Today was Andrew’s birthday. I think he had a good day. I got up with the girls for a change and he got to sleep in—even though I was up with the baby in the night. Rachel helped Grandma decorate the kitchen so that they could surprise Daddy when he got up. According to Rachel “he was so a-pized!” when he came into the kitchen. We also made a cake.

That was my main project this morning. It was my first attempt at fondant and now I’m wondering why I waited this long to try it out. Getting the cake to look smooth was a cinch—I just plopped the fondant on and it was good to go. If only I had used fondant for the wedding cake I made because icing that beast was treacherous.

I made marshmallow fondant because we had so many marshmallows left over from camping this weekend. On one of the recipes I looked at online it said that it tastes like “very sweet marshmallows” instead of vile (like regular fondant).

Then I read further and found that the recipe calls for equal parts marshmallow and icing sugar. So, yes. It tastes like very sweet marshmallows.

It was surprisingly easy to make—just melt some marshmallows in the microwave with a little bit of water. Stir in an equal amount of sugar. Knead (adding more sugar as necessary) until it is like a marshmallowy gob of play dough.

I made Andrew help colour the fondant since he was awake for that part. He did a great job.

Then I cut out leaf shapes and Rachel helped me arrange them on the cake. She was really sad when I said we had to go to church before eating the cake, but I didn’t feel too bad about depriving her the opportunity to eat more sweets since she ate about every other leaf she offered me. One broke when she was handing it to me and I said, “Oh, that’s okay. Just hand me a new one; you can eat the broken one.”

After that almost every other leaf wound up mysteriously broken. The cake turned out pretty well, for my foray in fondant, in spite of the many “broken” leaves sacrificed into Rachel’s tummy. The autumnal motif was inspired by our weekend camping trip. 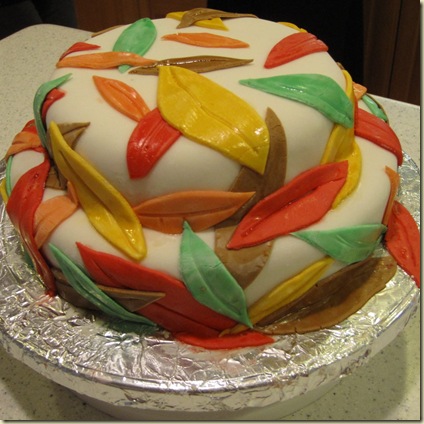 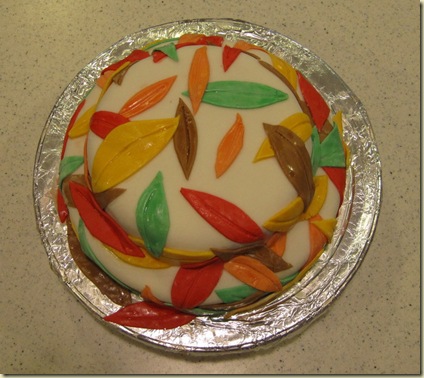 Church was fun, though. Grandma came to sit with us during sacrament meeting because Rachel’s nursery teacher, Sister Gardener, is leaving to go on a mission to New York with her husband and today was their last Sunday. They both spoke during sacrament meeting so after Grandma attended church at her ward and then went to listen to Auntie Em speak at her ward, she came to our ward, also.

The primary sang to Andrew, which he enjoyed.

After church we had left-over camping food—faux Cafe Rio sweet pork tacos—and then sang Happy Birthday to Andrew once more before cutting into the cake. My family was there, as well as Grandma, Auntie Em, and Auntie Sarah...but I didn’t take very many pictures so mostly it looks like only Emily and Andrew were there. Those two have way too much fun together! 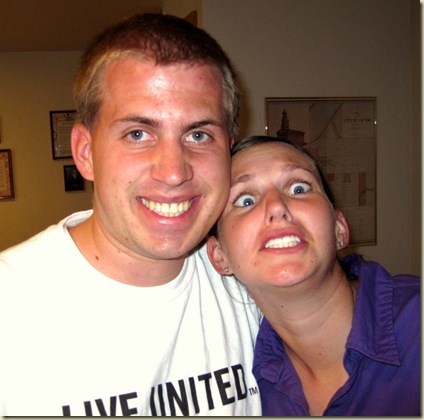 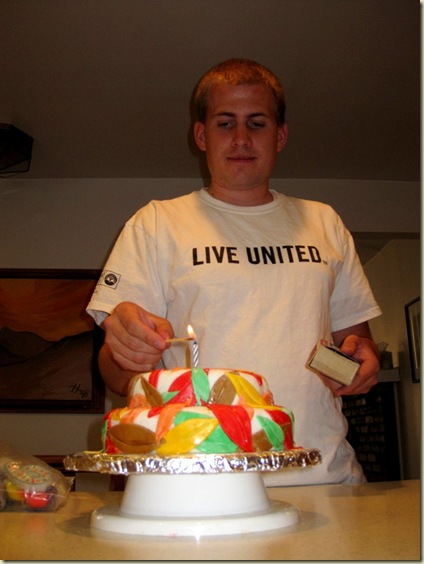 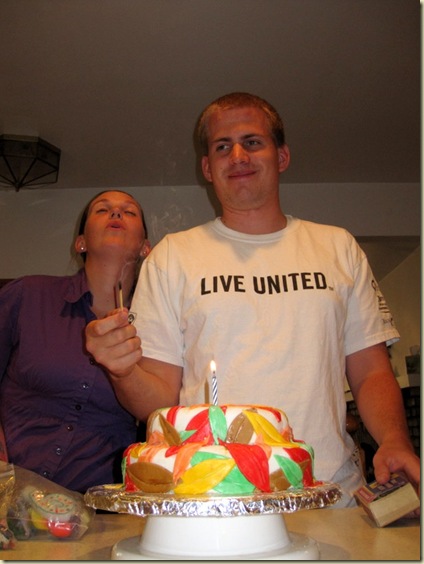 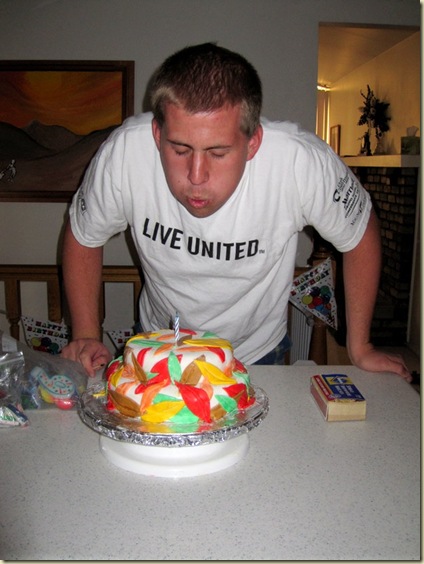 And with one poof of air Andrew’s 26th year expired.

He says he wished for a full-time job when he graduates.

I told him that was my wish on my birthday.

The best part of the day, perhaps, was having Andrew search for his birthday gift from his parents. Andrew has been wanting a real office desk and chair since we got married, probably. Somehow I got mine, first, and he’s just been living on scraps—end tables, coffee tables, kitchen tables, and the like.

A few weeks ago he made himself a “mega desk” out of a large piece of plywood (with a whole lota help from his mom). His parents got him a chair for his birthday and hid it in the storage room.

After dinner we all went downstairs to watch Andrew search for his gift—which was sitting in a box with a big picture of an office chair on it, unwrapped, in the middle of an aisle in the storage room (so I used the word “hid” rather lightly). He couldn’t find it. I even went up and drummed on the box and he totally didn’t get it.

Yes, but what is on the box is also in the box.

He was so excited once it all set in. He’s already assembled it and has been basking in pure escritiorial bliss.

My present for him hasn’t come yet even though I ordered it forever ago. I suppose it’s better that way—we can spread the birthday joy around a bit. It’s never a good thing to have too much birthday in one day!