The day after Miriam was born we had our first rainstorm in Egypt in like...forever. This year we got our first snowfall the day after her birthday. Rachel was beyond excited. She's been waiting to experience snow for like...forever. It was a school day and she talked about her plans for the snow the whole way to school. Unfortunately, as you can see, the snow was a little scant. 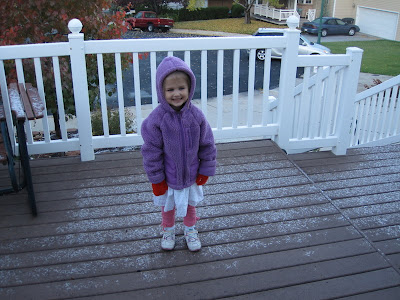 I told Miriam that she didn't have to go outside to see the snow since there really wasn't much to see but she really, really wanted to go outside. That girl makes a b-line for two things: the great outdoors and the stairs. 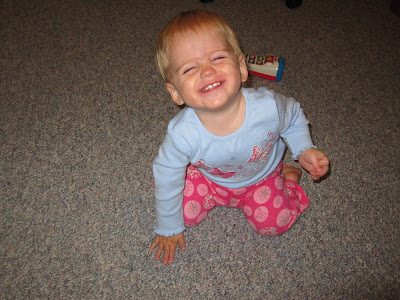 After some begging on her part I finally relented and we went outside to visit the snow. For like two minutes before I wimped out and took her back inside. 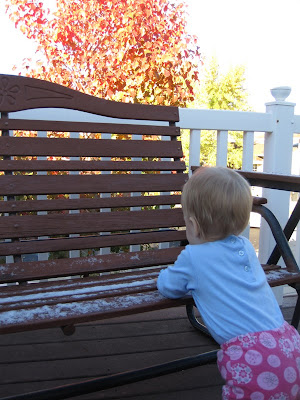 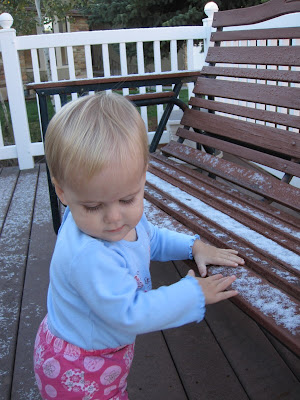 After I picked Rachel up for school she asked if she could play in the snow. I told her she could...if there was any left. Since it was noon, though, the snow had all but melted, only little patches of snow clinging to the shadows remained. Instead we played ballerina in the living room. While we were spinning around (because that's all ballerinas do, don'tcha know?) we noticed that it was snowing and quickly got ready to go outside. Unfortunately "quick" isn't very quick when it involves coats and boots and gloves and hats and scarves and snow pants and sweaters (and...and...and) so we kind of missed the big flurry but another one started a few minutes after we got outside.
For a few minutes the girls were playing beautifully together--they crawled around on the deck like puppies and caught snow on their tongues. 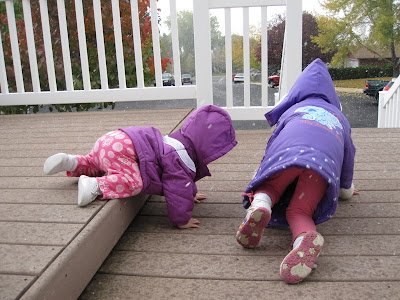 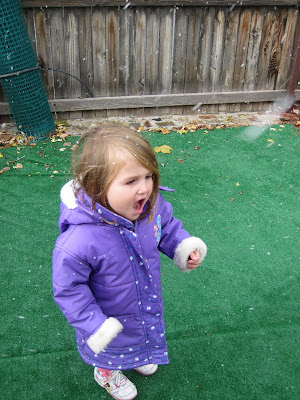 And I said, "There's not enough snow for that, babe."

And she said, "Well...can we just make a snowball?"

And I said, "There's not enough snow for that, either."

And she said, "Well, this is dumb snow!"

It wasn't at all like we had told her it was going to be so she spent several minutes acting all dejected and angry. I tried telling her that she'd have plenty of other opportunities to make snowmen but she didn't really pull out of her funk until I threatened to go inside if she didn't start playing. 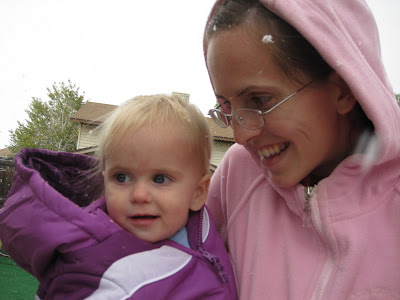 The snow was kind of magical, I guess, and it was fun to see my girls enjoy it so much but I'd still choose palm trees over snow any day. I'm already chilled to my bones and it's difficult for me to fathom it getting any colder even though I know deep down inside that this weather is rather mild compared to what winter is like and is extremely mild compared to Albertan winters. Still. It's cold for an Egyptian, okay? My biological thermometer is telling me that it should be a balmy 80 degrees still so this weather is shockingly chilly.

Yesterday was even worse. Mother Nature must be a nicer mother than me because she actually listened to Rachel's whining and complaining on Tuesday and gave her what she wanted on Wednesday morning. Rachel was in our room at 6:15 am to tell us the good news. IT SNOWED! A LOT OF IT!

She wanted to go outside right away. I pulled her into bed with us and told her to be quiet until Daddy's alarm clock went off. She was compliant. And then I let her get up with Andrew. When I got up about a half hour later I got her all dressed to play outside and she stayed outside by herself until it was time for us to leave for Meme's doctor appointment. That is remarkable on so many fronts. 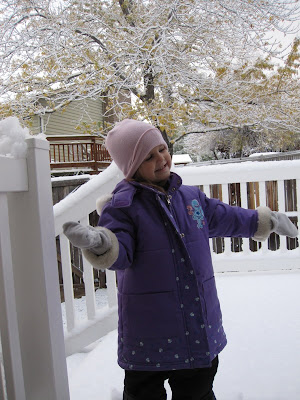 She traipsed around the patio since that is where the snow stuck the best and then after she'd ruined all the pristine snow decided that she'd like to make a snow angel. She came inside and asked me to remind her how to do it, so I told her, and she dutifully laid in the snow and flapped her arms and legs. Since she'd already trampled and compressed the snow it didn't do much but I told her it was a beautiful angel, anyway, and she was so proud of it. 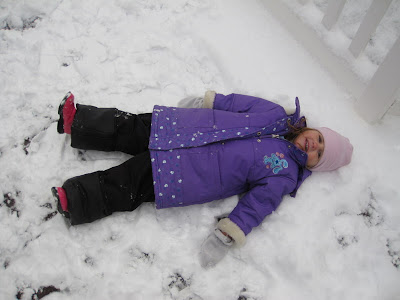 She also invited everyone outside so that she could throw a snowball at them. Luckily she doesn't have very good aim yet. 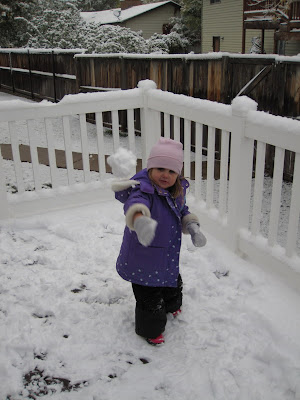 When she came inside to get out of her wet snow clothes so that we could get ready to leave she scrunched up her face and remarked, "I like winter, but it's a little bit cold."
Oh, girl! It gets a lot colder than this.
After Mem's doctor appointment, Grandma took us to find winter boots so now we're basically set for winter...except for we still need waterproof mittens or gloves for Rachel. I have a feeling she'll be one who enjoys playing in the snow and thin fleece gloves just aren't going to cut it for her.
Also, Andrew, consider this fair warning that, come November, I will be starting to get into the Christmas spirit. After two years of not enough Christmas I'm going to start a little early this year--so your ban on Christmas carols and Christmas decoration and Christmas books and Christmas crafts and all else Christmas before Thanksgiving? Yeah, I've vetoed it this year. And, and! It's already snowing so, like, 'tis the season, right? It already feels more like Christmas than it ever did in Egypt because it's so cold outside.
Posted by Nancy at 12:31 AM